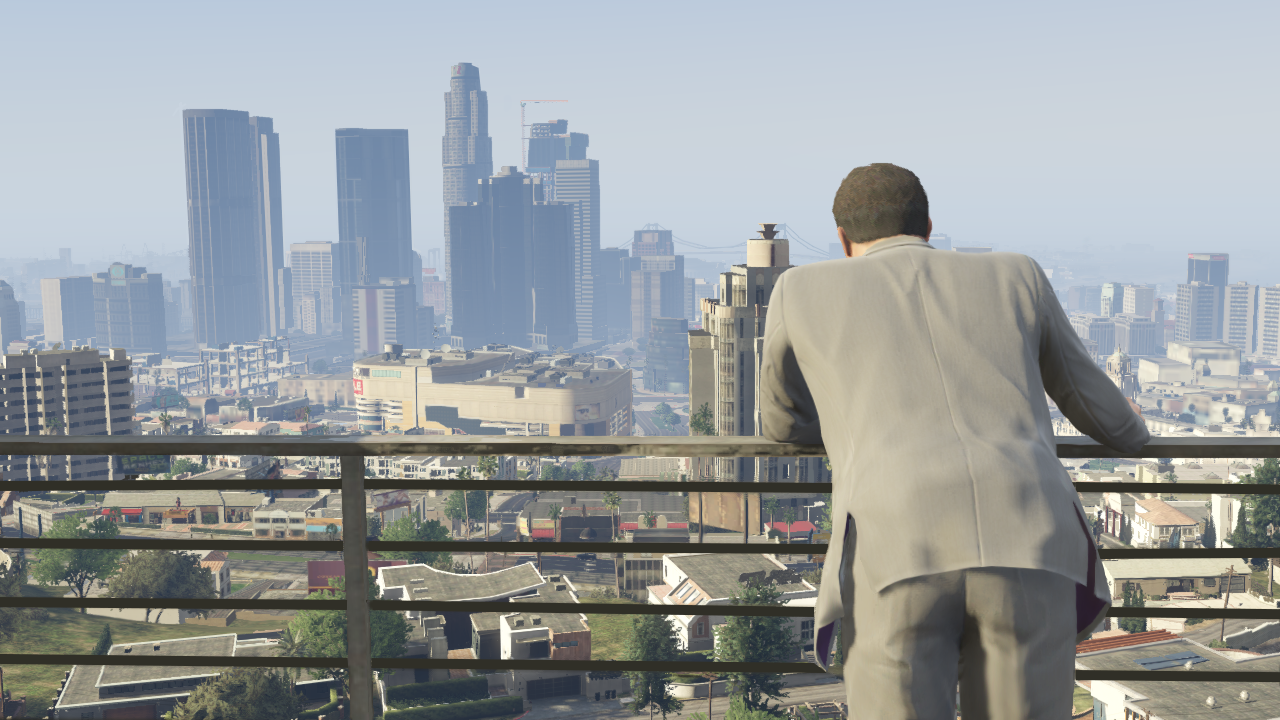 Five years have gone us by since the last major Grand Theft Auto game for console, and now its time for another. Naturally for a project this big, Rockstar Games has pumped-in a whole lot of new since its last instalment.

It’s the game many of us were waiting for, and from the moment you take control of it, it looks like our patience was well-rewarded. Grand Theft Auto V (GTAV) brings players back to San Andreas in alternate reality United States, a place we last saw during our trip to Grand Theft Auto: San Andreas. The current-generation iteration of the San Andreas playing field is now more expansive than any Grand Theft Auto ever was.

GTAV’s world is definitely a level up in the gorgeous factor, moving away from the murky metropolis that was Liberty City. From the Los Santos skyscrapers that glimmer against the sun to the beautiful bikini-clad ladies by the beach. Take yourself away from the city and you have the deserts of Sandy Shores alongside Blaine County, a drastic change from city life.

But the city is just an empty playing field without all the vehicles on the street. There are over 200 drivable vehicles in the game which ply the busy streets of Los Santos, but in a more significant way than ever before. Drivers you tick off can now ram you in a fit of rage, while cop cars speed through around you chasing other felons. Buses line the streets and trucks pull out of driveways after a successful delivery.

Aside from the GTAV manual app, Rockstar Games has also included the iFruit app. Downloadable for iOS and Android, the app allows you to customise your current in-game vehicle on the go, including your very own custom license plate, through the Rockstar Game Social Club.

Also in the app is the pet simulator for Chop the Dog, so you can take Franklin’s loyal mutt on the go and he’ll prove more effective in the game after you level him up some in the app through Nintendogs-style virtual care and minigames.

Handling of the many vehicles has vastly improved, making driving a pleasure in GTAV. If you don’t like the car you stole, simply head down to one of the Los Santos Autos spray-garages and get it tuned up, everything from the engine to its suspension can be tweaked to give your vehicle the best advantage when you need to shake the cops loose. If traffic congestion gets on your nerves, swing a plane off the runway, cruise the skies and celebrate the return of air flight to GTA. Or take a step further and dive into your personal submersible and explore the Pacific Ocean.

So we have the “Grand” city that looks like a million dollars and we have the “Autos” that make up part of what the game represents, but what about the “Theft”? The crime, the fist-fights, the shootouts and explosions? Naturally, GTAV doesn’t skimp on this, and it’s here where our review truly begins.

Meet our three protagonists. Franklin, a brother who grew up on the streets looking for a chance to make some green, Michael, a suddenly-out-of-retirement legitimate businessman on the brink of a family meltdown and Trevor, the erratic owner of Trevor Philips Industries who has done well for himself moving guns and meth. I will not spoil the history too much, but the latter two were best friends in a bank job gone wrong, and Franklin’s and Michael’s path cross early in the game and the three eventually get together through a few awkward events, tangled in a web of missions handed to them threateningly.

Missions still range from the usual car thefts and gunfights, but these are taken further when you start juggling our three protagonists. GTAV allows you to dynamically swap between Michael, Franklin and Trevor, “possessing” them during the mission, going through missions like never before. Players can now take care of the driving, the shooting and the Hollywood-style escape themselves. Naturally, this feature is not just restricted to missions. Swap protagonists at any time and watch them dealing with their own lives or return to them in the middle of a police chase. Swapping around the three is also essential for you to head to other missions when one character has nothing new on him.

GTAV also adds other mission types to the mix, such as Heists, much like that big one we had with Niko Bellic back in Liberty City, just that players themselves get to pick their approach on the job they are about to pull, like whether to point a gun at everyone in the room or knock them out first by gassing the air vents, for example. Players also pick out the crew they wish to have on this mission. Members that form this crew vary in technical expertise, driving ability and weapon tactics. The less skilled the crew, the more money you get to keep, but don’t expect a cheap heist to go down smoothly. From there, mission equipment will need to be scouted and obtained before the heist can even be pulled these range from the getaway vehicles and vehicles specifically required for the act or to block traffic, as well as weapons and disguises.

Also available in story mode are certain assassination missions that players can exploit to play the virtual in-game stock market with. Pop the CEO of major corporation and suddenly its rivals make it big in shares that you remember you conveniently bought in bulk beforehand. These missions don’t have the intricacy of a heist, but it brings in plenty of dough quickly, if played right.

Although Vigilante, Firefighting, Paramedic and Taxi Driving side-jobs don’t make an appearance in this game, there’s still plenty much to do in GTAV behind the hubbub of mission-based gameplay. Kick back from all the violence and play tennis, do yoga or run a triathlon. The beautiful, vast wilderness is there for you to explore as well, just bring the assault rifle along for the occasional mountain lion.

Dotting the sidewalks are the people of San Andreas who are still the charming bunch of virtual people full of conversation that keeps the city alive. Watch all the new animation on the people you almost knocked down and the cars that swerve to avoid you on the wrong side on the freeway. Help citizens who just got robbed or enter a convenience store to do some robbing of your own.

All the satire and parody you know and love from GTAIV and beyond remain a staple in GTAV. TV shows, in-game internet, shops and streets all poke fun at real life. Stop by the offices of the LifeInvader social network or catch a glimpse of the Fame or Shame reality show as you laugh at the flaws of our modern society.

Laughs and jokes aside, this game comes with its usual slew of controversy. You can still ruthlessly whoop a prostitute and gun down innocent people without remorse, but GTAV takes it further with one serving of interactive torture, depicted use of marijuana and several touches on the subject of sex. Trevor himself is a uncontrollable walking mess of sexual deviancy and perverse brutality. Grand Theft Auto has never been a game made for all tastes, especially if they are under 18, so read the ratings label, parents.

Technically speaking, you can tell Rockstar Games picked up a few things from their other titles. The mission replay feature from the The Ballad of Gay Tony expansion as well as the mission results system shows players how well they pulled off the mission, handing them a gold medal if they manage to breeze through a mission and fulfilling other requirements. The use of the focus-like special abilities during gameplay shows off slow-motion effects reminiscent of Max Payne 3, as well as the Crews feature implemented in the upcoming multiplayer launch.

A game this vast is naturally not without its flaws. Players will meet vehicular trouble when they discover their pimped-out ride can no longer be found in the game, a heartbreaker when you spend that much money on upgrades. Rockstar Games has addressed this, but not having the safety of a garage for your ride just isn’t quite Grand Theft Auto. Other players may also note how the protagonist would appear less resilient than usual and that cars would blow up easier, killing the driver inside, if it doesn’t land from a distance quite right.

But really, there’s just so much to this game I could go on about it for hours, much like the days you will take licking this game clean, scouring for all the hidden collectables, achievements, stunt jumps and gold medals on mission replays alone. And GTA Online multiplayer isn’t even out yet.

Do you really need more affirmation that this game is pretty much the best in the series?

Grand Theft Auto V is a Rockstar Games game for the PlayStation 3 and the Xbox 360. Online multiplayer launching October 1st.