Review – For Honor is a medieval blast 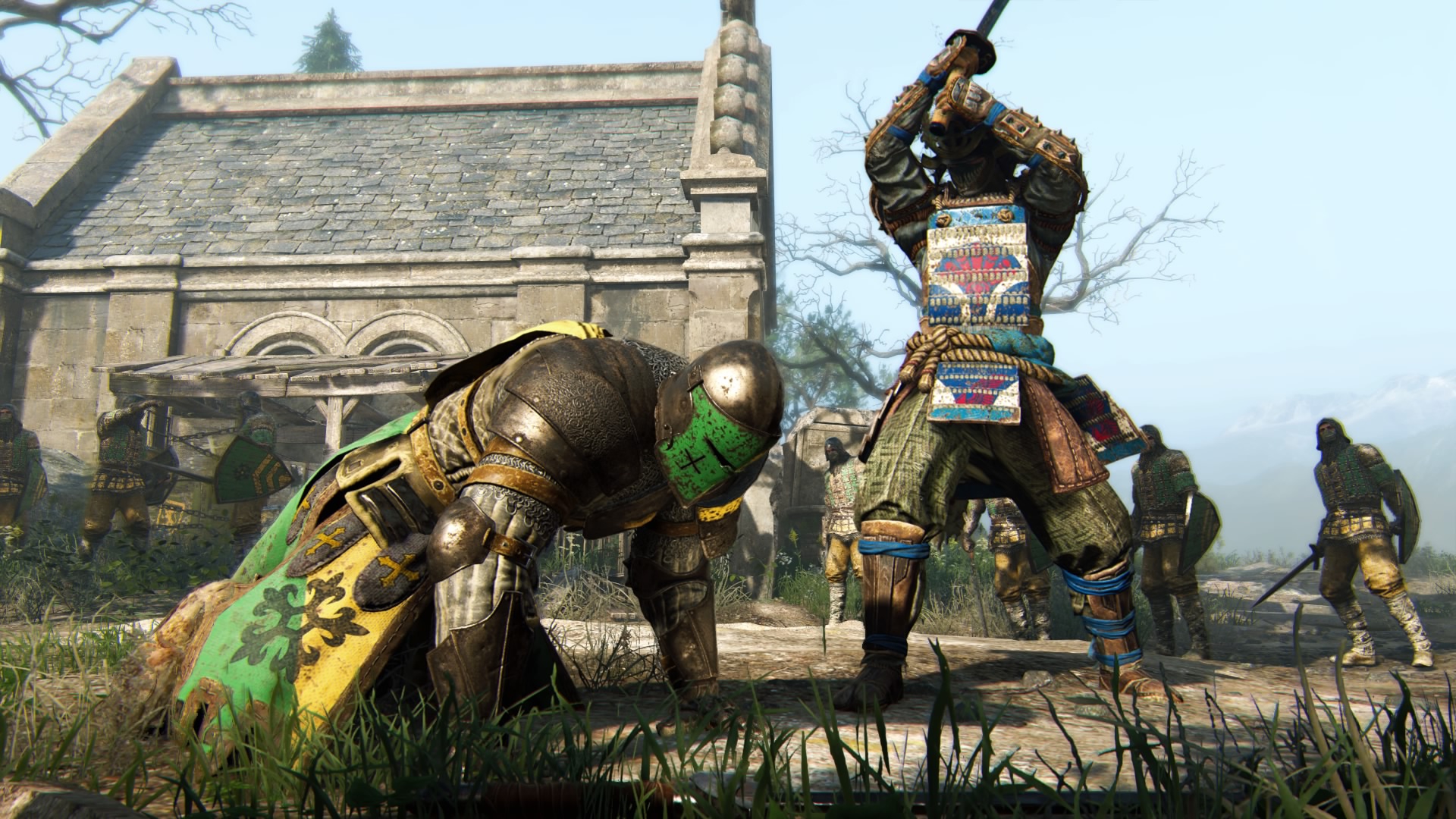 Judging by the game’s visuals, you would be inclined to categorise For Honor as a branch of the fighting genre, but the Creative Director had envisioned this to be a form of “shooter with swords”. Being a publisher that is famous for many hybrid shooter games such as Rainbow Six: Siege, The Division and the upcoming Ghost Recon: Wildlands, I think I can understand that perspective upon playing the game.

For a start, the concept of friendly fire is applied in this game. However, instead of bullets, you are vulnerable to blades and impact from allies. This approach strays away from standard ‘hack-and-slash’ template, adding realism to the experience. More on this later.

Based on popular formula, when the weapon develops into a favourite, the user will want to customise its further and make it personal. This is somewhat akin to the feature seen in Ghost Recon: Future Soldier, whereby the player is able to dissect and change certain pieces. In For Honor, such customisation exist but there are lesser pieces to tweak. Furthermore, most of these alterations are either cosmetic, stats-boosting or just simply looks intimidating.

In the opening video, we watch a member from each of three factions claiming their stake on a pool of water on the ground, evolving into a massive battleground. I was intrigued at how a small dispute can result in such chaos. This backstory is elaborated in the single player campaign across 18 missions, accompanied by narration and animation. Without spoiling anything, the plot contains numerous cliches but it works an an introductory bootcamp to make you become battle-ready.

Regardless of the faction you decide to align with, you will play as specific characters based on the plot. This is good to acquaint you with the strengths and weaknesses of various warriors, serving as useful ‘intel’ when you eventually play online later.

The single player campaign will have you explore terrains and fortresses, completing objectives and spotting landmarks. While the path is linear, there are branching routes that lead to collectibles and Steel, a precious in-game currency. You may wish to play on Normal mode first before attempting the higher difficulty levels.

That friendly fire penalty is more relaxed when playing with A.I. If a friend joins in, be mindful about your next weapon swing. However, from what i experience, it is not easy how detrimental this feature is. Furthermore, if you are dead, your friends can revive you.

Yes, story campaign can be completed in Coop. You will definitely need someone watching your back on Realistic Mode, wherein all user interface prompts are removed. If you survive, the rewards are bountiful.

Naturally, combat is the core activity in this game, and while it is simple to pick up, you will need time to become skilful. During face-off, you can guard top, left or right by mirroring your opponent’s stance based on an onscreen prompt. In return, you will strike at the unguarded side to deal damage. The A.I. is pretty impressive on Normal Mode, so expect to fall in defeat a lot in the beginning.

Along the way, you will learn advanced moves such as dodge, guard break and parry. Things become complex when you meet adversaries with new techniques, forcing you to time your response carefully. Button mashing between your light and heavy attacks will deplete your stamina, rendering you vulnerable. Feats are power-ups that can be used to boost your defence and attack. You can equip two at a time, depending on your preferred play style.

Customisation is another feature that is quite elaborate but limited. I applaud the move to include emblems from past titles, but why make owning the games the only way to unlock them? Granted, I could borrow the games from friends but it’s quite a hassle. Anyway, there is an option to use real money to purchase Steel, so why not extend such option as well? Also, Ubisoft should consider including emblems from their casual games library, such as Just Dance, Monopoly and Rabbids. I’m sure fans will appreciate the diversity of expression. This goes the same with emotes and executions. I’m excited about the ornaments – decorative objects – that can be applied for a more menacing look. Some are unlocked through completion of objectives but others require you to grind for more Steel. If you want to speed up, there’s an appropriate bundle on the Playstation Store.

The ability to put together shapes and colours into a personalised emblem is much welcomed, but I wish they would add Clan Support as well. Since Faction War is in the game, dedicated players should be interested in a permanent group feature that they could identify, recruit and grow. After all, the muscle of For Honor is in its multiplayer experience. While it is loaded with a decent number of game modes, fans will be craving for something more down the road.

Perhaps the crucial factor that requires immediate attention is in its multiplayer networking errors. On one hand, it’s great to know that the title is well-received and we want to relive the experience with our friends, but having to encounter failed matchmaking and errors just a few days after launch is going to frustrate all these warriors-to-be. Personally, I was disconnected and thrown back to the main menu while playing the single-player campaign. Ubisoft should consider allowing some segments to be available offline instead of shutting us off completely.

The Champion Status feels like a double edged sword. On one hand, it promotes teamwork because it adds boosts to you and your online teammates. If more users subscribe to this enhancement, the rewards are exponentially greater for everyone. However, new players are forced to come online as soon as they are onboard. I took 3 days to finish the story campaign and as a result I had lost that much days’ worth on Champion Status benefit. Also, as a working adult, I may not be able to come back to the game regularly. Thus, investing in a shorter period of Champion Status seems wiser.

As of now, I’m not inclined to stack any more beyond the expiration of the current period because I’m looking forward to play Ghost Recon: Wildlands in March and would not want my Champion Status to go to waste.

For Honor is a stunning looking game, and the graphics quality remains consistent during gameplay and cutscenes. I’m jealous to discover how the presentation would be on a PS4 Pro. I think its presentation quality can bag some awards in future.

Neezum has been exposed to many videogames since the '90s. Nowadays, he tries to juggle his passion amidst other commitments with a wife who doesn't share the same hobby.
Previous post Some clarity and context for Nintendo Switch local pricing
Next post Horizon: Zero Dawn is a PlayStation 4 masterpiece