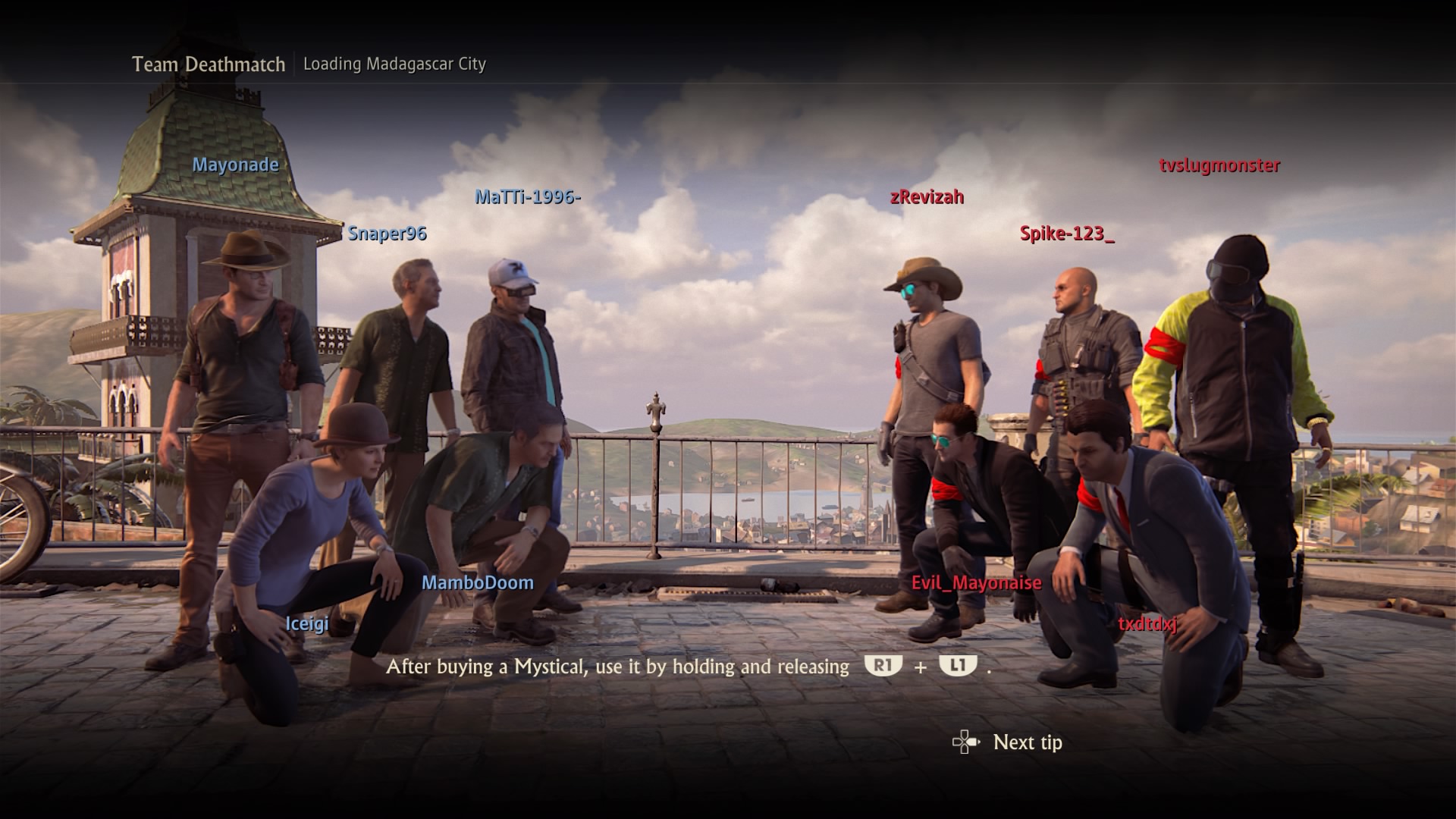 Most people know the Uncharted series for its blockbuster single-player campaigns, which is why we published our Uncharted 4 review early. This follow-up focuses on its multiplayer aspect only.

Don’t dismiss Uncharted 4’s multiplayer. Common convention would say that it’s an obligatory shoe-in to present a full-priced package but, in this case, that isn’t quite true. For one, the single-player campaign alone is well worth the price tag, raising the bar for linear action-adventure games as a whole.

As for the multiplayer, I’ll begin by saying that it left me cheering and cursing at the screen in equal measure. That’s good! I went in completely indifferent, past iterations telling me to expect nothing more than a mildly amusing distraction. Yet here I was, excitedly opening chests in the hopes of scoring a new hat, or frantically tossing an artifact to revive my teammates in time.

It combines current gaming trends – good and  bad – with plenty of Uncharted’s atmosphere, ultimately making for a rousing good time. Uncharted 4 ups its traversal game with rope swings, slides, and even more jumps, turning each combat encounter into a playground arena. That’s essentially what the multiplayer is, and when up against human opponents it’s cause for some tense moments.

Here’s why: Naughty Dog introduced two new gameplay elements called Sidekicks and Mysticals. The first is pretty self-explanatory, allowing players to call in an AI companion. They range from the heavily armored, chaingun-wielding Brute to the devastating Sniper and the life-saving Support. In other words, it bolsters the team in both diversity and numbers.

Mysticals are relics from past games that unleash some powerful abilities. The Wrath of El Dorado, seen at least once in every match, summons the ominous sarcophagus complete with lock-on specters. Other examples are the planted Staff of Ayar Manco, which serves as pulsing radar, and the thrown Cintamani Stone, which instantly revives downed allies within its radius. Now imagine all that coming into play – swinging in to join the battle, rolling into cover to help the nearest teammate, and soon after diving back out to flee from explosives or the unpleasant El Dorado. Each fight on the front lines is a chaotic affair, and in each match there’s rarely a dull moment; either I’m racing back to the fight, gambling on a successful flank, or leaping towards the nearest treasure.

Unfortunately, all of that action is hampered by what is starting to feel like outdated shooter systems. Roles are determined by preset or custom loadouts, with gear, sidekicks, mysticals, and talents relying on unlocks and a points system. Not being able to switch loadouts during battle basically penalizes experimentation, forcing players to stick with preset builds or to wait until they’ve gained enough content to construct a competitive one.

It separates the player-base into the haves and have-nots, further amplified by the use of match currency. Upgrading gear, hiring sidekicks, and purchasing mysticals all require money gained from tasks such as kills, assists, and revives, as well as spawned treasures and objectives. A player that does well will be rewarded with the opportunity to perform even better, and that power gap can turn a tug-of-war into a one-sided massacre.

Nonetheless, it’s hard to fault Naughty Dog for deferring to established practices, especially when those systems aren’t terribly broken. Just be sure to lean towards an offensive build, keep a support item in hand, and you’ll do fine.

Fortunately, there’s a fairly large list of taunts and cosmetics to appease us with, some of which can make for hilarious combinations. Unlocking them isn’t difficult, too. An out-of-match points system accumulates upon completing daily challenges or trials, the latter being solo matches that focus on gear, mysticals, and sidekicks. These points can then be used to purchase chests that randomly drop loot from their corresponding categories – vanity items, mods and boosts, and hero weapons.

Hero weapons are mainly stronger variants (looping back to the have and have-not discussion) while boosts confer personal one-time modifiers such as cheaper sidekicks and mysticals. Those aside, the chest system in a nice incentive to keep playing, as nothing beats seeing Nathan in a wide-brimmed hat and monocle flamboyantly blowing a kiss. If only Elena could see him now.

Let’s face it: you’ll be buying Uncharted 4: A Thief’s End purely for its masterful single-player campaign. But when all is said and done and the treasure list is fully accounted for, don’t forget to take the multiplayer out for a whirl. Naughty Dog has spiced things up for the final brawl and it’d be a shame not to see all the characters one last time.

Unless, of course, we wind up getting a racing spin-off called “UnKarted”. Now that’ll be something.

Ade thinks there's nothing quite like a good game and a snug headcrab. He grew up with HIDEO KOJIMA's Metal Gear Solid, lives for RPGs, and is waiting for light guns to make their comeback.
Previous post Civilization VI lets you build custom cities and boost research speeds
Next post Win a Code for Destiny of Thrones