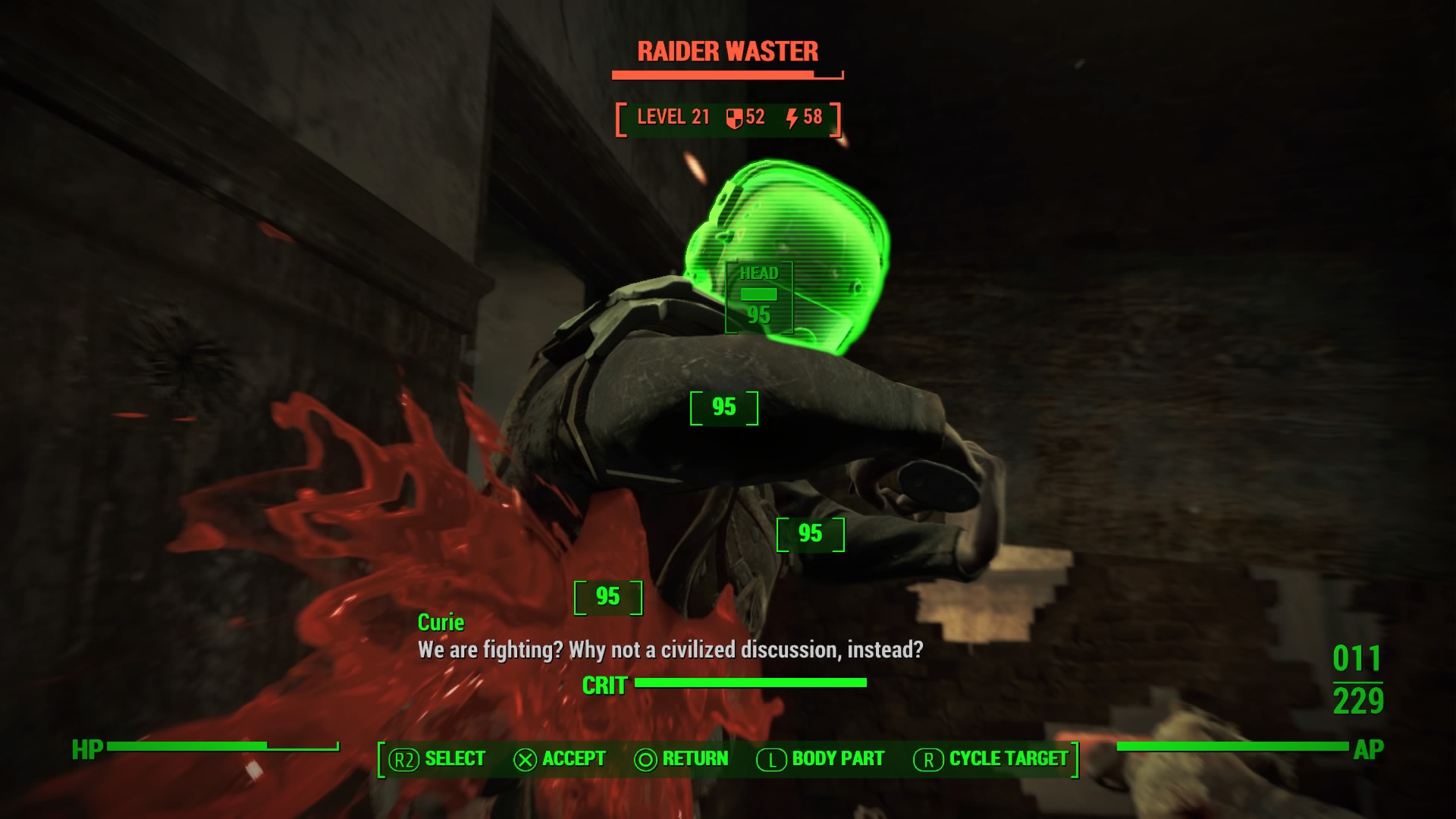 Fallout 4 received an extraordinary amount of hype leading up to its release, only to have all that excitement taper out thanks to bugs and a gutted RPG system. Despite these nagging flaws I’m still easily transported to a post-apocalyptic Commonwealth, exploring and scavenging to the golden tunes of ’50s American radio.

The modern Fallout games have been a melding of old ideas and new technology, yet in shifting to the latest console generation Bethesda Game Studios have made some drastic changes. At its core is a move away from character-driven roleplaying, giving players the freedom to tweak and adjust their Vault Survivor as and when they see fit.

In past titles characters had traits such as Strength and Charisma go largely unchanged, with unlockable perks further determining play styles. Fallout 4 replaces all that with a large skill tree. On top of having no level cap, players can eventually forge a wasteland god that knows and does all, a far cry from the days of rolling different characters. Amazingly, that blow to roleplaying is further amplified by Bethesda’s treatment of dialogue.

Gone are the wide range of nuanced speech options we’ve come to expect. In its place stands a mere four choices that, for the most part are some variation of yes, a prompt for more information, or a chance to be sarcastic. Even skill checks are reduced to only using Charisma, when before we could engage in high Intelligence discussion or explore many other fun alternatives that enrich repeat playthroughs.

Sacrificing all that for voice acting was not worth it. The new system is terribly boring and also discards a founding pillar behind the series. Combined with the streamlined levelling system it’s difficult to consider Fallout 4 an RPG.

The end of the world

As for story it actually has an interesting premise: we get a painfully brief glimpse of life before the bombs, are misled by Vault-Tec staff, and then wake up to a whole new world and a missing son. It just falls apart when the urgency of rescuing said son is negated by all manner of distractions.

Having no reason to care for the family didn’t help, either. Chances are players end up more attached to their companions than to NPCs escorted for a handful of minutes. Bethesda’s insistence of writing the character for us makes things seem awkward too, as the Survivor’s seemingly mellow persona suddenly ignites in passion whenever the son is involved. Even if we did care, the main story’s resolution proved disappointing, with little variation between endings.

Matters improve somewhat with the side and faction quests. The best one involves pretending to be a radio show superhero, making me wish more missions were crafted with similar attention to humor and detail. It’s just a shame that the faction quest lines all lead to an ultimatum, making for a flat inter-faction experience.

The real storytelling star are the locations themselves: tales gleaned from terminals, holotapes, and the environment. One that comes to mind is a school where the head secretly introduced Mentats (an intelligence increasing drug) to increase student grades, subsequently pocketing the raised school budget. Then there’s the maze set in a multi-storey parking lot, promising both riches and death. These landmarks were simply chanced upon during my travels, two blips in a massive open world.

And explore you will, for all junk is now used in crafting and repairing. While a smart revision on Bethesda’s part, it can be a double-edged sword – meticulously looting and storing items drags progress a fair bit.

Crafting also brings us to a key addition: settlements. Unlocked early on, players can build shacks to meet minimum requirements, or construct fully walled compounds. In exchange you can establish trade routes between settlements, build shops, and have settlers work on farms and scavenging stations.

It’s early days, however. Building is reliant on a limited pool of schematics, whereas free construction is incredibly finicky. Just remember that Charisma and the Local Leader perk are required for useful settlement functionality, as the game does a poor job explaining things.

What helps tie all that exploring and looting together is the much improved gunplay, now reliable enough to pass as a shooter. You can even skip the iconic VATS targeting system, except for critical shots and sticky situations.

Having VATS slow time instead of stopping it was a good decision too, injecting tension where there was none before – deciding where to aim at a charging Yao Guai is tough when every second counts. Taking too long could even mean they move into cover at the last second, wasting ammo and Acton Points.

Good thing we have power armor, another drastic change for the series although more of a thematic one. They’re awesome to use (just getting in makes me all tingly) but are so prevalent in Fallout 4 that they’ve lost their near-mythical reverence. Thankfully that’s been tempered by requiring consumable fusion cores to operate, at least in the beginning.

This highly addictive explore-loot-build routine sucks me right in, so much so that I forget about the butchered dialogue or the main story. Before I know it I’ve crossed the hundred-hour mark, still busy tinkering with a settlement and planning my next trip.

Fortunately I didn’t encounter any significant bugs on the PlayStation 4, other than NPCs walking away mid-conversation; annoying when they happen to be quest givers. The loading screens are plentiful too, presumably tied to all that junk lying around. But my experience alone isn’t representative of others, so keep more save files than necessary.

Patches have only started trickling out for Asia-region console copies of Fallout 4, more than a month since the game’s launch. The matter had been brought up multiple times across forums and in the media, only to be met with silence from Bethesda.

According to release notes these patches contain some vital fixes, covering problems such as the player getting stuck in terminals (more commonly reported on PC) or players unable to hand in certain quests. It also reports optimizations and performance boosts, ones that, according to Eurogamer, have been beneficial for the PlayStation 4.

All things considered Fallout 4 is a good, if somewhat disappointing, game. That it manages to successfully immerse players for hundreds of hours, even in the face of controversial changes, shows just enjoyable it actually is. We can’t ignore its problems as they severely diminish replay value, but at least this sandbox will improve with the early 2016 release of the Creation Kit, delivering mods to all platforms.

Perhaps we’ll get to see Obsidian Entertainment return for a spin-off. For now, it’s time to crank that laser musket and hit the road.

Fallout 4 is an action-RPG developed by Bethesda Game Studios and published by Bethesda Softworks, available now for PC, PlayStation 4, and Xbox One. A copy was provided for review.

Ade thinks there's nothing quite like a good game and a snug headcrab. He grew up with HIDEO KOJIMA's Metal Gear Solid, lives for RPGs, and is waiting for light guns to make their comeback.
Previous post Logitech’s G933 wireless gaming headset coming to Singapore
Next post Cashback promotion running for PS4 season passes