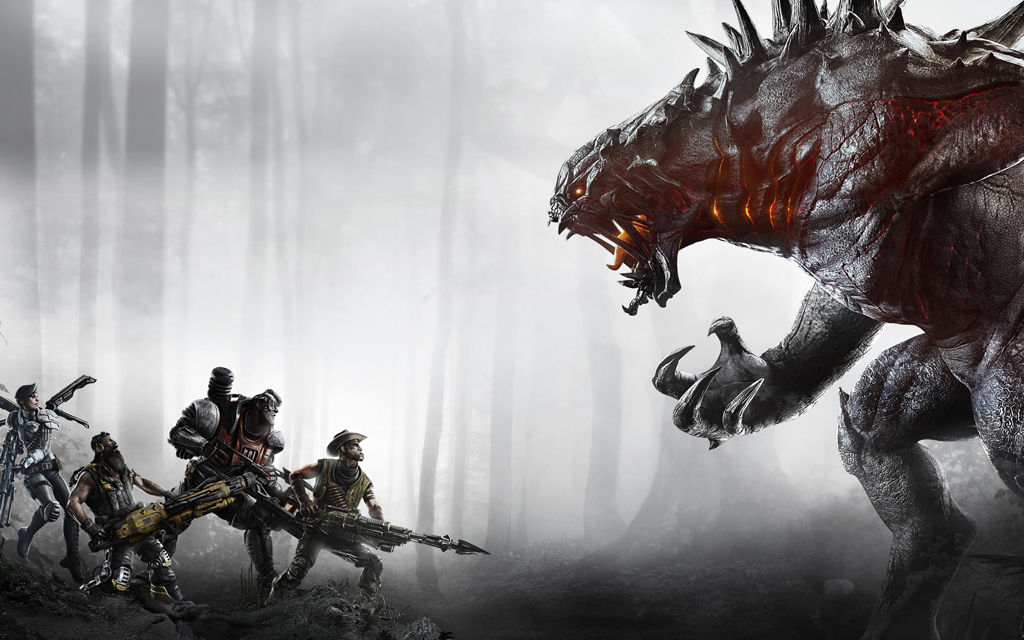 There’s a very weird thing about Evolve. There’s a lot of it to love, but then again, at the same time, there’s not enough of it. It sounds a bit paradoxical but bear with me. As somebody who’s been gaming since the late 80s, Evolve falls short in one of the most important (if not the most important) aspects of a game; content. To be blunt, what’s here isn’t enough. Evolve straight out of the box is pretty barebones. And yet, Turtle Rock Studios (or maybe it is 2K Games) seems as if they’d be getting away with it. But I’m getting ahead of myself, let’s start at the beginning. What exactly is Evolve?

Think of Evolve as the natural evolution (pardon the pun) of the gameplay elements in Left 4 Dead. Where that game was a 4-players tag team up against zombies controlled by A.I., Evolve takes the concept one step further and switched it into an all-humans controlled 4 versus 1 – where the ‘1’ plays as the adversary. If you’ve ever played Police & Thief at the playground during your childhood, it’s much like it. Evolve’s focus of a more deathmatch style of game pays off in some aspects, though it also makes for a game that doesn’t really have much of a focus apart from pitting players against each other.

In Evolve, four human players play as the Hunters separated in four distinct classes. There are the Assault, Trapper, Support and Medic, which are pretty self-explanatory. Each of the classes have different weapons and attacks and as the hunters level up, they become stronger (through usage) and will unlock perks that can be used no matter what side you’re on, be it Hunters or Monster. Mastery of a class’s weapons unlocks more characters in that (which have different loadouts) class, which gives a sense of progression. It works similarly on the Monster’s side too, which means that in order unlock everything there is to get in the game, players will be playing a whole lot of matches.

One of the best things about Evolve are the Hunters. As you’re preparing to drop (and throughout the game), they’ll be talking and shouting to one another, making the entire game come alive. The Hunters feel like real people (cookie cutter as they are) and the quips and barbs they trade at each other actually give the game some sort of camaraderie-like  atmosphere, even if they do tend to repeat too much.

Balance is a tricky thing to achieve in multiplayer focused games, and trickier still in a game such as Evolve. It’s this very reason that some of the classes can seem to be a bit overpowered. Of course, it also depends on an individual’s skills. In a game where nearly every class is important, an inept player can bring down the whole team. But there is undeniably an aspect of unfairness, especially if it’s a highly levelled player squaring off against a team of low levelled ones. The perks one unlocks by levelling up can sometimes give a sizeable advantage. There’s really no way to avoid this and Evolves makes no effort to, so low level players will simply have to grit their teeth and play through the pain.

Luckily, the game’s progression system is universal. Multiplayer and Single Player progresses are shared, which allows those opting to play offline to have the (relatively) same experience as online.

It sounds fine and dandy, but more importantly, it works. You can play offline with the A.I. to brush up your skills and if you then desire, hop online to play with others. Playing offline as a Hunter offers an advantage online play doesn’t as you’re not forced to stay as a single class. You can do this online too, but only if the role you want to switch to is AI controlled. You can skip to any of the four Hunters on a map by simply pressing the D-pad, letting you change roles on the fly. If playing solo is not your cup of tea, you can always play online. Matchmaking is relatively fast and painless through Steam although there can sometimes be lengthy wait times if you’re looking to play a specific map type.

Here’s where Evolve could do much to improve on (as updates or DLCs, yikes). There’s a dearth of content. There are only a handful of maps and modes. Just as you’re getting over that fact, you’ll realize that the game only has 3 playable Monsters currently. Having only 3 different monsters (with a 4th coming soon) is nowhere near enough, especially when the highlights of the game have been exactly about the monsters.

There are a handful of different modes to play as and every single mode can be played online or off it. But the truth is, not all modes are fun or created equal. Some obviously favour one side more than the other and truth be told, the handful of modes get old quickly especially since the game doesn’t have any cohesive campaign or story mode. You play the same modes offline, you play the same modes online.

Evacuation Mode is probably the main gameplay type you’ll be playing the most as it randomly generates the modes of play. Set over a five day period (with a day representing a match), the mode has Hunters being pitted against the Monster with a variety of objectives. It’s the only mode with a ‘plot’ (if it can even be called that), with Hunters racing against time to save survivors and getting them off-world before the Monsters wipe them out. Also, successful completion of an Evacuation Mode game nets you experience bonus (win or lose), so not only does it have dynamic missions, it’s also hands down the best way to power level up your classes.

Evacuation is also where the game really shines. One might have expected a basic deathmatch to just have the two sides squaring off but it’s really more of a hide and seek type of game. As the Monster starts off weak, he’ll need to constantly be on the move from the relentless Hunters. At Stage 1, the Monster is significantly weaker than the four Hunters. At Stage 2, they’re about even and Stage 3 fully favours the Monster.

But even Evacuation mode gets stale after a while and that’s my biggest gripe with Evolve, because the game feels like it truly deserves more variety. The gameplay, mechanics and balance are polished and excellently done. I just wished there were more maps of varying locales and monsters at launch. So while I do rate the game highly, I’m torn between recommending a full-priced purchase of Evolve in its current state, or to wait till the game introduces more maps, monsters and other bells and whistles. But if you’re immediately looking for a spiritual successor to L4D2, and enjoys the banters and jibes that can only come from multiplayer sessions, then Evolve without a doubt fits the bill.

Aaron Yip is an industry veteran with more than 15 years of experience. When not spending time on his gaming PC and consoles, he can be found in Hyrule solving ungodly puzzles and collecting gems.
Previous post How to do a System Transfer for the New Nintendo 3DS XL
Next post World of Tanks Generals: Closed Beta Codes Giveaway!