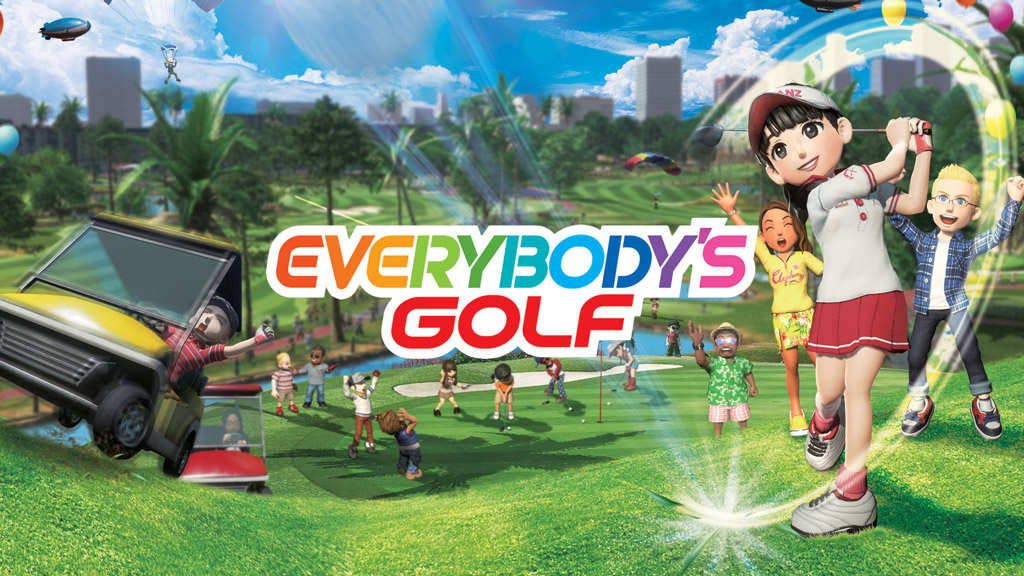 A long time ago, three console generations back, the world was introduced to Hot Shots Golf. Instead of the stuffy and boring style adopted by most golf games at the time, Hot Shots Golf made virtual golfing hip, cool and most importantly…fun. After multiple games on multiple generations, we finally come to Everybody’s Golf, the latest game in the series. Amazingly, in a series full of stellar installments, Everybody’s Golf stands as the best of the best. Not just in the series, but in the genre.

To say that there has never been a golf game like Everybody’s Golf is no hyperbole. True, some golf games, such as Mario Golf, have dabbled in mixing in RPG mechanics and an open-world concept, but none have succeeded as well as Everybody’s Golf. Whether it’s single-player or online, the game is more than simply teeing off endlessly.

Before you even get to tee off though, you’ll need to create your own golfer avatar. The customization options aren’t that impressive in the beginning but that’s simply because the coolest unlockables are only available later. Once you start playing in tournaments, be prepared for a constant stream of new customizations options that drive you to keep on playing over and over. Once your avatar is ready, you’ll finally be ready to dive in; either to the single-player game, local multiplayer or online. Unlike most sports games, the meat of the game lies solely in its single-player mode. It’s here where you’ll be doing most of the unlocking; completing in tournaments to rank up and to reveal more hidden stuff. One of the best thing about the game is that there’s an overworld to run around in. In the single-player mode, it’s your very own island hub. The island you can roam around on might not seem all that impressive, but it’s a breath of fresh air when you need a small break from the links. You can even earn the right to drive one of the golf carts by beating a certain NPC. Now, how many golf games have something like that?

On the courses, you’ll see other golfers too. Some even teeing off at the same teeing ground as you. It’s a great inclusion, making it feel as if you’re actually participating in a tournament. Another great inclusion is that you can actually move around on the teeing ground too, which allows you to pick the perfect spot to tee off from. That’s easier said than done however, as controlling the camera is often an exercise in frustration. Not only are the camera controls awkward, but the game doesn’t seem to recognize when your view is being blocked by an obstacle. This is especially problematic with the reverse camera shots that are on the green. Most of the time, it’ll be blocked by an object and you’ll have to fiddle with the camera to get a better view.

If solo play isn’t your cup of team, you can hop online at any time you wish. Play in the Open Course online mode and you’ll be given free rein on the course that you have selected. You can ride your cart around the whole course, visit the club house or even go fishing. All this while other players who are playing in the same online course go about playing their own games. It’s a completely refreshing experience from other golf games and really drives home the point that a golf game doesn’t have to only start at the teeing ground and end when you’ve sunk the ball into the hole. Playing in the Open Course mode even gets you exclusive rewards, so even if you’re a solo gamer, it’ll behoove you to go online daily, if only to complete the required rounds of golf to qualify.

The other multiplayer mode is Turf War, where you’re randomly divided into two teams and try to get as much points as possible within a time limit. Par, Birdies, Eagles and other spectacular gameplay gets you point that contributes to your team’s total, which is tallied up once the time limit’s reach. It’s fun and frantic, as like the other modes, you’re given control on what hole to play at any given time. Think you can birdie the eighth hole? Run on over there first to get a leg up on the other golfers.

Of course, if you prefer to play with only your friends, the game also allows you to create custom games too.

One of the best new additions to the game is the XP system. Each club now has its very own profile, allowing you to make it stronger through repeated use. If you hit the sweet spot on the impact meter, you’ll earn XP in one or more of the following categories; Power, Control, Backspin and Back Door. Power gives you more oomph to your shot, letting the ball travel further. Control reduces the club’s sway, giving you more accuracy with your hits. Backspin allows you to better manipulate how your hit the ball. Finally, the Back Door stat improves how accurate you are for a chip in. These stats are persistent, for offline and online. Now, you’ll have the motivation to make awesome shots persistently, not only for your score, but also to make your character stronger.

To progress in single-player, you’ll need to rank up. You do that by slowly gaining XP from completing tournaments. Fill up the XP bar and a hidden VS character will challenge you for a one-on-one game. Beat that character and you unlock their customization options, and resets the XP bar again. You’ll need to beat a certain number of VS characters to rank up, which unlocks more courses and other stuff. Not to be confused with Rank is your Golfer Level. This is constant for both online and offline and shows you how you stand up against other players. The higher the level, the more skilled the golfer is. This can be an issue in online multiplayer however, as some players are more powerful than others but ultimately, the game still depends on your skills and timing to make the best shots.

While developer Clap Hanz has the golfing gameplay and mechanics down pat, the same can’t be said for the game’s visuals. The courses look decent and all but the character models could be much better. By today’s standard at least. The frame rate can be problematic too, despite the option to lock it at 60-fps. While it maintains that smoothness offline most of the time, playing online is another story, as the frame rate can fluctuate wildly. Lag is ever present online too, with players in the background sometimes teleporting in forward (or backward) every time they move. In fact, just connecting online can be problematic as I’ve personally had multiple instances where the game simply froze while trying to connect me to an Open Course or Turf War game. Perhaps this will be patched, but as of patch 1.4, there are still network issues that need to be addressed.

But all in all, Everybody’s Gold is still a phenomenal golf game. Not only does it add new and unique elements to the mix, it does so while also retaining the same brand of great gameplay that’s been a signature of the series. Clap Hanz has achieved something incredible with Everybody’s Golf – by making virtual golf fun!

Sal's just your average hardcore gamer. He started gaming on the NES in the 80s and has been ever playing since. Sal doesn't care about which platforms games are on, only that he wants to play them all!
Previous post Tekken 7’s first DLC will take your bikini-clad fighters to a bowling excursion
Next post PlayStation 4 gets new DualShock 4 controller colours