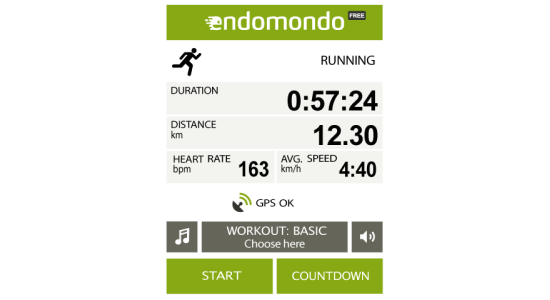 If you have watched the Olympics, it’s likely that the athletes’ sporting prowess and amazing bodies have inspired you to do something about your less-than-stellar one.

Though the Games are over now, there’s no reason not to keep up with your exercise routine via the Endomondo Sports Tracker. This mobile app – for the Blackberry only – is a free personal coach and training partner, and helps track your physical activity.

The Endomondo Sports Tracker does exactly as its name suggests: it tracks how far you’ve run, what speed you’ve run at, and what distance you’ve covered. There’s also a calorie counter that tells you how many you’ve burnt. We find the latter function highly motivating, especially if you’re trying to lose weight.

But not everyone goes through the same workout routine, and the Endomondo Sports Tracker anticipated that. By touching the ‘basic workout’ button in the centre, you’re taken to an expanded menu where you can choose to manually add your workout, pick from a series of basic workouts, or set your target distance, duration, or calories.

The basic workouts range from running to weight lifting – nearly every common (or practical) form of exercise is an option. If you can’t choose your routine of choice from a list that includes spinning, scuba diving, and martial arts, simply set a duration or distance and turn your beast mode on! The Endomondo app won’t be able to count your calories for a sport it can’t track, but it can still double as countdown timer.

After each workout, your performance is automatically uploaded. You have an option of turning this off, however, especially if you’re just starting out and don’t want to feel belittled!

Since the Endomondo Sports Tracker allows you to upload your performance (at Endomondo.com), you’re also able to ‘compete’ against other users. The tracker can download the best performing user’s routine and pit you against it; alternatively, you can also manually select – and beat – your friend’s workout routines.

For those of you who listen to music while you run, you can also add playlists to the app, so you can access your music at a single touch of a button. There is also an audio coach option available, though we didn’t hear any of it during our workout. It might be a sign that we should work harder. Oops!

Apart from the non-existence of the audio coach, we like the Endomondo well enough. We especially liked how accurately the distance tracking of the Endomondo Sports Tracker worked. It does, however, do its job only if you select the sport that corresponds with your workout. Selecting a cycling routine but going for a power walk instead will result in a lopsided record.

We also liked that the app’s green, barebones layout was customisable – you can choose how you want your workout’s information to show up. It’s easy enough to use, with all its one-touch functions, and is sensitive enough to accurately pick up on your workout’s distance.

If you’re looking for further motivation to stick to your routine, the Endomondo Sports Tracker might do the trick. While we reviewed the Blackberry version, the app is also available on nearly all phone operating systems. Check out the active and competitive community of Endomondo users right here.

The Endomondo Sports Tracker for Blackberry is free to download from the Blackberry App World.