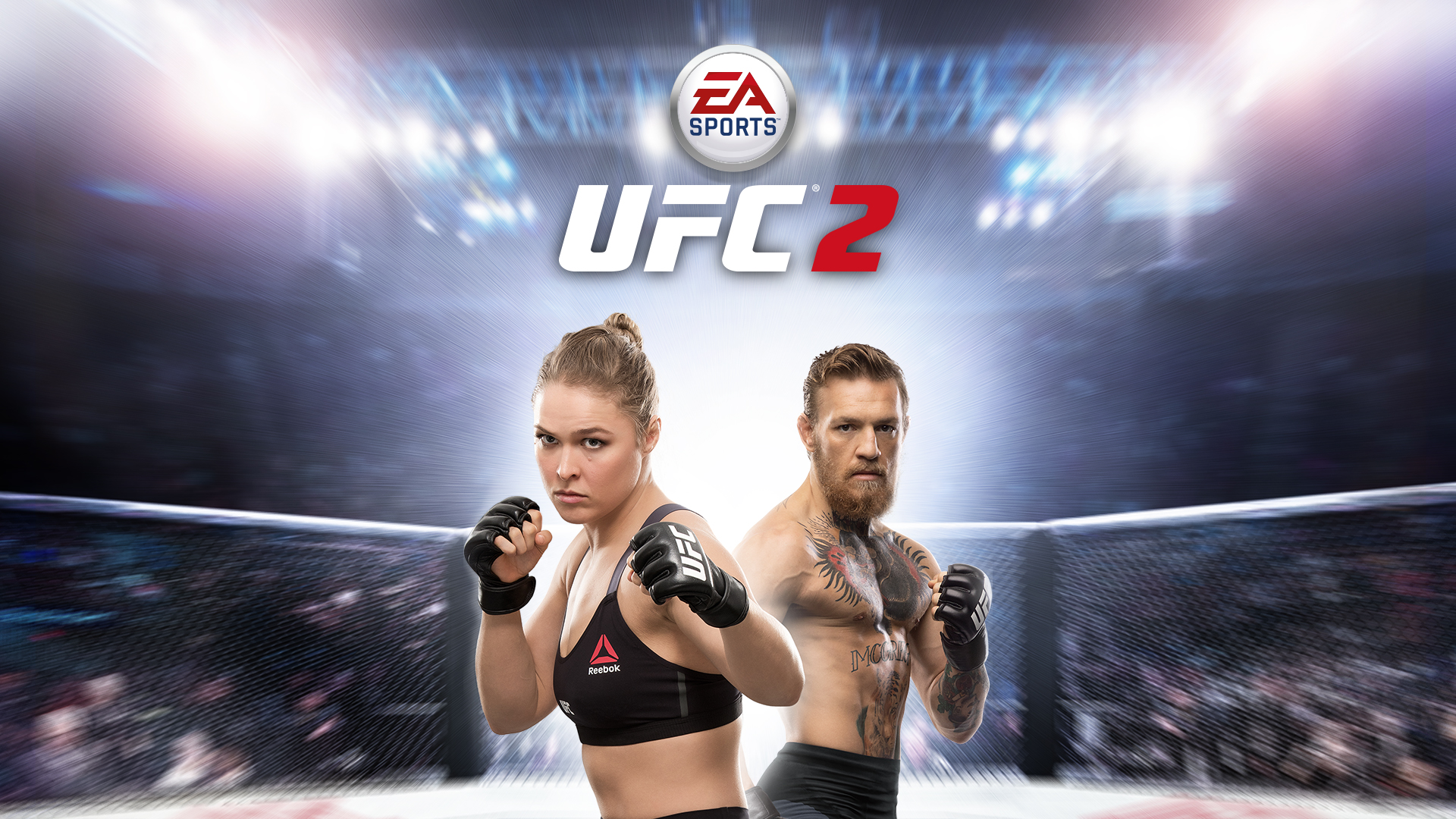 It is the fourth round of a UFC featherweight championship fight. My fighter, a former UFC lightweight champion who worked his way to the top after winning The Ultimate Fighter in dominant fashion, is in big trouble. Reigning champion Max Holloway has me on the ropes—or, more accurately, against the cage – and he is close to dashing my hopes of becoming champion in a second weight class.

As Holloway beats the stuffing out of me, I conserve my energy for one last Hail Mary. I see my opening, and I leap into the air with a flying knee. It lands square on Holloway’s jaw, and he collapses to the canvas. A few punches on the ground, and, in the words of Mike Goldberg, “it is all over.” I am the new featherweight champion.

EA UFC 2, the sequel to the fun but flawed first partnership between the video game giant and the MMA promotion, offers many such moments. Once you’ve worked out how to actually play the game, you’ll participate in many back-and-forth battles that equal even the best real fights the UFC produces.

But, this is not an easy game. It is a complex simulation that approximates the feel of a mixed martial arts bout. However, it is also a fighting game with difficult controls and timing that takes a long time to master. You have to know the controls, but you also have to understand how to conserve energy. You have to know how to judge distance and how best to use your fighter’s physical advantages to overcome your opponent.

This, needless to say, is not a game for button-mashers. If that’s your style, you will quickly find yourself frustrated and on the end of a losing streak. But those with the patience to stick with the game will be rewarded with a deep and fulfilling fighting game. There are still plenty of wonky moments in the gameplay, but after 60-plus hours, I have yet to see any of the crazy animations that made the first game a viral YouTube hit. The ground game has been drastically simplified from the previous game as well; instead of using half-circle motions for transitions, you simply hold a certain direction for a certain transition.

Those who still find this daunting can turn on an assistant that graphically shows you what each directional transition will do. After an hour with the new system, I was able to submit opponents on a regular basis; that’s cool because I could never submit anyone in the first game.

The real star of EA UFC 2 is the presentation. The graphics here are stunning, with each of the game’s 250-plus fighters looking remarkably like their real-life counterparts. The UFC’s signature graphics package that it debuted last summer is here, too, down to the use of gold graphics when a championship fight is coming up.

The entrances have been refined, and several of the UFC’s biggest stars use their real-life entrance music. Yes, Ronda Rousey walks to the Octagon to the strains of Joan Jett’s “Reputation,” and it gives you a little thrill the first time you see it.

Career mode is still mostly the same, and it feels like a grind after a while. You start off on The Ultimate Fighter, winning your way through the tournament, before making your way to the main roster. From there, you’ll fight what feels like an endless parade of computer-created fighters; it takes a long time before you’re finally standing across the Octagon from a face you recognize.

The biggest difference in Career Mode comes in the form of training. Now, even though you’ll still grind your way through a bunch of exercises in order to improve your skills, you also have to manage the amount of damage you take. If you train at the hardest level, you reap the most rewards, but you also risk injury that can lower your stats drastically for your next fight.

The game’s biggest new addition is Ultimate Team mode, an import from other EA games. Here, you create a fighter and embark on an online or solo-play career. Your fighter is improved by opening packs of cards that upgrade attributes and give your fighter new moves; these card packs are purchased with virtual coins won by fighting and completing daily tasks the EA team sets out for you. And, of course, you can also buy them using real-life money, if you prefer to skip the grind and send your fighter to the top immediately.

Ultimate Team mode is heavily influenced by role-playing games, and it is a fun and often complicated mode. You still have to win the actual fights, and in my time playing against other testers and reviewers online, I found that I am quite terrible at the game. Either that, or they are just worlds better than me. I preferred to play Ultimate Team mode offline, against opponents I could beat, but you don’t earn as many coins offline as you do against real opponents. Still, this mode will provide plenty of replay value for those into it.

Then there is the intriguing addition of Event Mode, where you can play Joe Silva and book entire UFC cards. The best part of this mode—and I stumbled upon it by accident—is the ability to use combined weight classes. In this mode, the featherweight division actually consists of all flyweights, bantamweights and featherweights. Welterweight is lightweight and welterweight, etc., so if you want to play Demetrious Johnson vs.Conor McGregor, this is the place to do it.

As I mentioned at the top, EA UFC 2 is not perfect. It approximates mixed martial arts, but it does not simulate it perfectly, or even close to it. It can be frustrating, especially for inexperienced gamers. But the addition of the new Knockout Mode—there’s no ground game or grappling to be found here—makes it a great party game.

And those willing to invest the time to learn and figure out the intricacies of a complex fighting system will be rewarded with a game that is a lot of fun despite its flaws.

Aaron Yip is an industry veteran with more than 15 years of experience. When not spending time on his gaming PC and consoles, he can be found in Hyrule solving ungodly puzzles and collecting gems.
Previous post Pocket MapleStory SEA launches with over 30,000 early registrants
Next post Logitech’s G900 Chaos Spectrum aims to make wireless viable for eSports