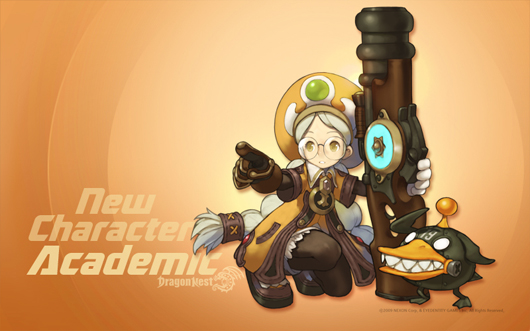 Dragon Nest, the cutest RPG on the market right now, has just gotten cuter with the addition of its new Academic class.

The spunky little Academic is a lolicon dream come true. Though she’s portrayed as an innocent little girl with large eyes, she is in reality someone from 50 years in the future sent back in time to save the world of Lagendia. And don’t let her looks fool you – she’s going to do what she came for! The Academic begins her journey in Mana Ridge.

As a ranged class, the Academic is pretty overpowered. From level 1 to 15, she can use either cannons or bubble guns, the former being slower but more powerful, the latter quicker and lighter with its punches. It’s her skills that take the cake though – this class is described as being OP from level 1 to level 40, according to Dragon Nest aficionado, ‘broccoli’ of the guild Chronicles.

“Essentially, what you get is an absolute glass cannon class,” he said of the Academic, adding that though the class has low HP, it gets even stronger when it diversifies into either the Engineer or Alchemist at level 15. Engineers have their abilities slanted more towards using mechanical constructs and explosives, while Alchemists are more handy with biochemical warfare and AOE spells.  To prove his point at the class’s OP-ness, broccoli cited one skill – Poison Break – as being able to deal over 10,000 damage in Compensation mode in PvP.

The class diversification does make for pretty interesting gameplay, however. Later on in the game, Engineers are only able to use cannons, while Alchemists are restricted to bubble guns.  Engineers thus have more powerful physical attacks and weaker magic attacks, as befitting of their class, while the Alchemists have it the other way round, with weaker physical attacks and much stronger magic attacks. The bubbles would have to be made from something somewhere, right?

All in all, the Academic, and its later classes, the Engineer and the Alchemist, are breathing life into a previously stagnant Dragon Nest economy and play-style.

Don’t go crying ‘imba’ or ‘OP’ just yet though. broccoli told us that more and more Academics are getting ranked in the Top 10 of PvP leagues, and the developers are aware of their lolicon’s strengths. It could be that EyeDentity will update the original four classes with power-ups or even additional skills, to balance it with the Academic.

Also, no one’s stopping you from playing an Academic – if you still prefer the flexibility of being able to use a cannon or bubble gun.