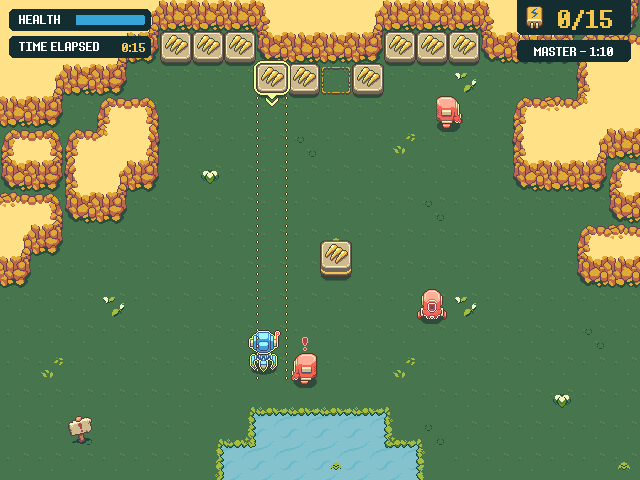 Cubetractor is a tower attack and puzzle game by Singaporean developers Ludochip, built in the same vein as the Legend of Zelda and Battle City games of yore.  The game is centred around its namesake – cubes – and has you utilising them in different ways to get past each level.

We tested the beta build of Cubetractor up to the fourth ‘world’, or set of levels. The game has a very interesting premise, in that while it does require you to slay monsters and destroy towers, you can’t directly attack them. Your character, reminiscent of a stylised ATLAS or P-Body from the Portal games, instead has to pull cubes, combine them, and even create new units to get past the various challenges in each level. It can pick up batteries – which contribute to your final score – or pick up spanners that replenish your HP, but has no attack.

So how do you clear each level of its enemies? Monsters, turrets, or walls can be slain by pulling blocks into their direction. As you advance through the set, things get more complicated. Cubes can be combined to form walls, turrets, or even power generators. Walls can be used to keep your tower safe from enemy towers, while power generators increase your rate of fire. Cubetractor is played with the arrow or WASD keys, with the action button being the ever faithful spacebar. For the seasoned gamer, the controls pose no issue, and feel instinctual.

True to the developers’ inspirations, the game has a top down camera and a 2D, 16-bit appearance. Its music is predictably 8-bit, but with an upbeat note and catchy tune. It sounds a lot like what one might hear out of Theme Hospital, but for good reason.

Because we all know that in spite of its quirky appearance, Theme Hospital is anything but a leisurely game, and the same goes for Cubetractor.

It is not your everyday, low-key puzzle game. The roaming monsters create a sense of urgency, and the constant fire from enemy towers forces you to finish each level quickly. There is no luxury of time to figure out how to get past a level: you just have to do it, or die trying And Cubetractor has been designed for just that. If you create a wall or a tower in a wrong spot, you can demolish it with no penalty. You also do not have a finite number of lives; you can die as often as you like (or need to). That’s not encouraged, though, since your final score for each round also includes the time taken to complete the level.

While the scaling difficulty and introduction of newer and more challenging units keeps things interesting, I did feel that Cubetractor got a little too demanding for the less puzzle-game inclined. It might do better in its final build with adjustable difficulty levels. It was helpful that the game was chock full of tooltips, though; these tooltips also gave hints on completing the more difficult stages.

A multiplayer mode would be worth exploring as well. I can just imagine going head to head with friends in a game of tower attack, creating towers by tugging blocks towards each other, or destroying my friend’s formation across the moat by sending blocks towards him!

As a PC game, Cubetractor is definitely going to have more depth than your usual fare on the App Store, and I’m looking forward to see what other quirks developers Ludochip can add to the game.

Cubetractor is developed by Ludochip for the PC. It is playable on both PC and Mac. The game is still under development, and was recently selected as an IGF China 2012 finalist.