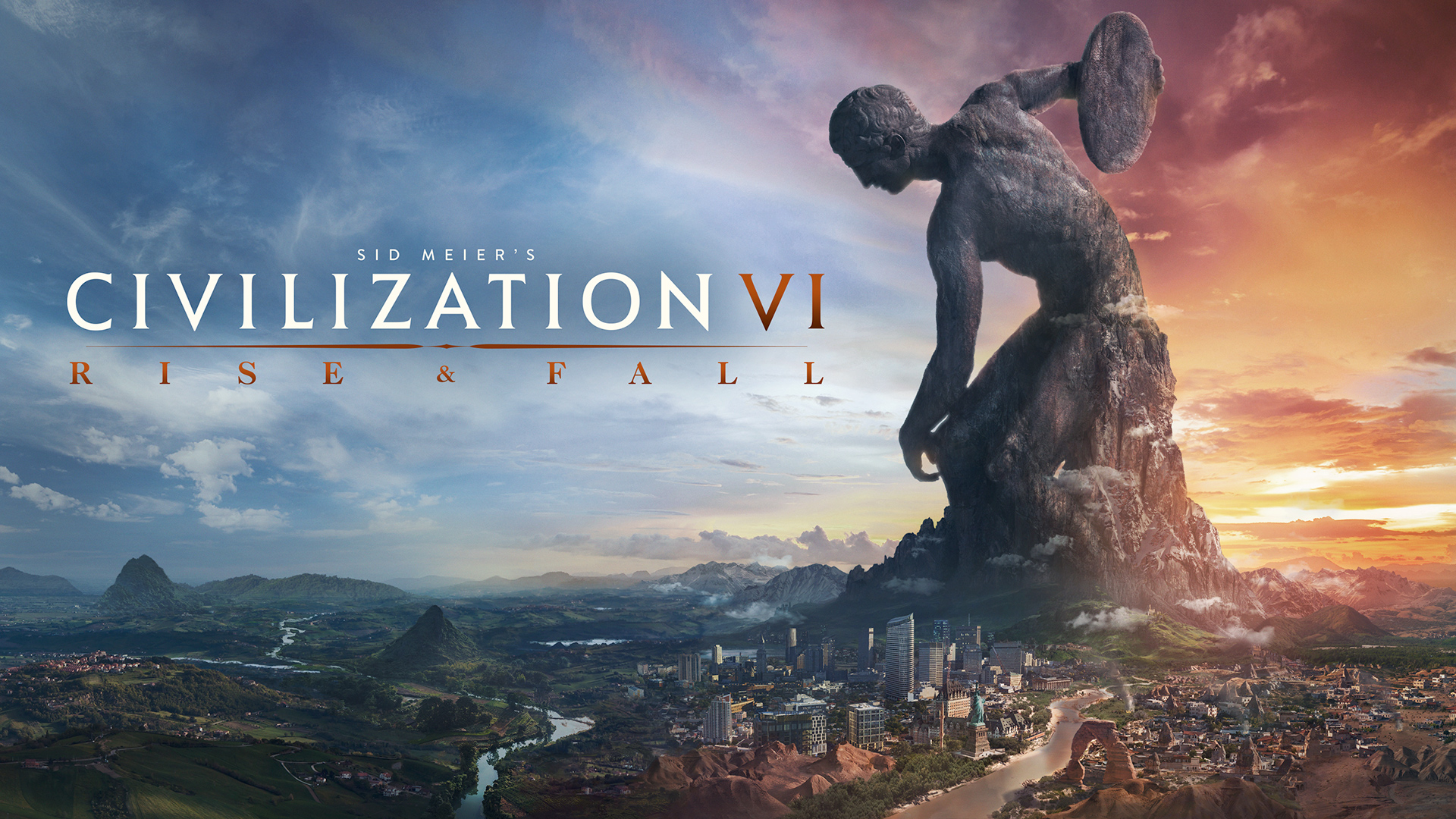 “Civ is a disease.” My gaming partner chuckles from the half-hearted joke, just as we marvel at how a mutual friend is still going at it. It was sometime between five and six on a weekend morning, and the only reason we were bidding goodbye was because we needed to sleep — no way were we done playing Civilization VI: Rise and Fall.

We all know how big of a time vampire Civilization is, yet we still gladly offer our necks whenever new content or sheer fancy hits. For players like us, long-time fans yet not quite hardcore strategists, there’s a simple measure for quality: how many days, weeks, or months can you go playing the game before needing to back out? With Rise and Fall, I’m still counting.

I touched on the new Era and Loyalty systems in our 150-turn preview. The first has proven to be a welcome and sensible addition, a constant reminder for players to always push forward. It’s easy to be lulled into a false sense of security when you have your first few cities set-up, a few wonders in the cultural bank, and a scout now halfway across the world. Forging into the unknown, finding tribal villages, and fending godless barbarians eventually gives way to the rhythmic beat of production cycles and diplomatic fencing. It’s that point in the game where you stop racing against the clock and start staring at it.

Well, not anymore. While districts serve as the larger building blocks on the road to victory, Eras help to fill and define the moments in-between. Rather than contently waiting for that campus to build or research to complete – all while keeping the eureka boosts in mind – I’m now busy chasing after Era points. Being the first to find a natural wonder, circumnavigating the globe, or destroying a barbarian encampment, are just some of the many minor tasks that play in parallel to Civilization VI’s overarching structure. And thanks to the extra flavor provided by the Golden- and Dark Age Dedications, it seldom gets repetitive.

Again, this isn’t an extra layer of needless busywork. These tasks cannot and do not overshadow your larger goals, diplomacy included. It simply means that in one Era I’d be building up my trade routes, and in the next I’m hunting for new continents or whatever it is I’ve picked. The offered Dedications may not always line-up with your plans, especially in the late-game, but there’s no penalty for ignoring them. In fact, if you time things right, you could even leap from Dark to Golden, entering the aptly named Heroic Age for two extra Dedication slots.

The game feels tighter and more active as a result. Instead of one long slog highlighted by major events — that time a rival Civ invaded or when you found that awesome plot of land — Rise and Fall breaks the game into neat chapters that catalog your civilization’s progress. In some ways, it makes the journey feel a little more personal.

The entire point of that exercise is Loyalty, a new citizen metric for Rise and Fall. As you can imagine, a city running low on this “resource” can have negative consequences. At best, you get a warning and solve the matter a couple of turns later. At worst, the city revolts and turns independent, ripe for anybody’s taking through military force or sheer Loyalty pressure. In practice, this returning “city-flipping” idea tends to apply to the AI more than the human players, and it seems to happen less often than Civilization IV’s culture-based approach. That said, I’m all for its inclusion since it does expand the game’s non-military options.

Firaxis have added a couple of ways to obtain and manage Loyalty, the most prominent of these being Governors. They’re unlocked through the civics tree and must be assigned to a city for a Loyalty boost and unique passive bonuses. Unlike great people, they’re here for the long run and can be upgraded using the same unlock points. For instance, Moksha “The Cardinal” allows your religious units to heal in his city. In other words, having him in your holy capital makes for a near-impenetrable bastion against evangelical rivals. It’s a tactic that, so far, has only been thwarted by enemy spies removing Moksha from his post.

It’s clear that Governors are powerful additions, though I do find myself favoring the same few choices regardless of what Civ I play. Luckily, their strength is tempered by the fact that successful enemy spies, or reassignments, will put them out of commission for a few turns. My own spies have been very busy as a result, bringing some much-needed variety to the occasionally dull subterfuge gameplay.

Other means of obtaining Loyalty are through buildings and policies. The former includes existing options such as the monument and the all-new Government Plaza district. Aside from awarding a flat Loyalty boost, the Government Plaza introduces three new sets of buildings that enhance your style of play.

Take the Ancestrall Hall for example. Available from the Classical Era onwards (with a requisite Tier 1 government), it permanently grants a 50-percent production boost towards settlers, while also granting new cities with a free builder. You also get a Governor point. During the early-game scramble for territory, it allows me to quickly secure an iron deposit, or to block off an encroaching Civ by pairing the new city with Governor Reyna and her tile acquisition passive.

While I’m fond of the two major additions, there’s one gameplay mechanic that still leaves me scratching my head: Emergencies. The gist of it is that Civs can band together against a single aggressor for a multitude of reasons. Let me state that this is leaps and bounds ahead of the diplomacy system when it comes to trust and flexibility, but the system is in dire need of a revision. In short, it’s ridiculously unbalanced. My first encounter with an Emergency was when I was one Civ away from a religious victory, prompting the rest to try and convert the holy city I just acquired. Using the Moksha strategy mentioned earlier, I held on just fine. For my minimal efforts, I was awarded a huge surge in religious pressure, making my final push that much easier.

That doesn’t sound too bad, but it’s appalling when gold and war is on the line. In another example, a bloodthirsty Civ had conquered a neighboring city-state, prompting a liberation Emergency. It was a considerably simple goal given the size of my army, but I held off on the objective and invaded the transgressor instead. I claimed half his territories before liberating the city-state by myself, pocketing the entire prize pot and a whole swathe of new cities. None of the other four Civs were close enough to participate, so we’re talking thousands of free gold. And the cherry on top was that I did it free of any warmonger penalties. If there’s anything Firaxis needs to patch then this is definitely it.

Notably, an Emergency is something only the game can propose. That’s entirely understandable since it’s in no way related to diplomacy. However, the current implementation feels way too aggressive. We can react to a nuclear bombing by warring against the Civ that pushed the button — with a whole bunch of bonuses too — but there is no Emergency for cleaning up the radioactive fallout afterwards. You may wonder why anybody would even want to help a rival Civ, but that path could lead to rewards other than gold. Perhaps the citizens could express their gratitude through Loyalty or by being more accepting of foreign acolytes and prophets. For something that wouldn’t penalize the victim, maybe the restored region could have passive trade bonuses for a set number of turns. Whatever the case, there’s a load of untapped potential here, ones that can help steer Civilization VI away from its militaristic slant. Not that I’m against in-game war, something core to the franchise since it’s inception, but you can’t deny it’s long been the easy way out.

My biggest disappointment with Rise and Fall shouldn’t come as a surprise: the AI. While Firaxis adds plenty of fun and engaging ways to spice up the gameplay, it has the side-effect of pulling the floundering AI into even deeper waters. Most of the free cities I encounter come from the AI settling too close to rival cities, oblivious to the Loyalty penalties from doing so. I’ve ousted enemy Governors from cities they have no business being in (a reminder that districts and spies make it easy to tell what a city specializes in), and I recognize many of the odd military and diplomatic behaviors carried over from the base game. It’s one of the largest and most jarring kinks in the Civilization VI experience, and while funny at times, it does sully the mood for a good challenge. And no, raising the difficulty for handicaps just isn’t the same.

Online multiplayer continues to be a bag of challenges too. On the bright side, a desynced player leaves a negligible impact for the other players, only appearing to take a longer turn than usual. The affected player merely sits through the loading screen once again, but it’s not uncommon for Rise and Fall to get so out of hand that they can desync after every turn. That wasted time adds up and it absolutely stings. As usual, there’s a whole bunch of online wisdom on ways to prevent this. Your best bet is to disable all mods and severely limit the number of AI Civs and city-states, but again, it feels like a compromise. I’m sure Firaxis are doing their best to sort it out, but when Civilization is itself such a big time commitment, it’s hard not to gravitate towards other multiplayer games.

What I won’t delve too much into are the new Civs and leaders. Rise and Fall adds nine leaders and eight new civilizations, in addition to global content such as new wonders, buildings, resources, and more. Fresh content is always good, and the newcomers bring some interesting playstyles to the table. Some are simply fun to use, such as Genghis Khan and his Keshig cavalry (and cultural victory achievement), whereas others are sheer powerhouses like Queen Seondeok with her Seowons and science boosts. Plus, Firaxis has an open-arms modding policy, so it’s relatively easy to tweak these values or install Steam Workshop mods for more flavorful sessions.

The foremost duty of any expansion is to bring lapsed players back into its fold, fuel community buzz, and entice those still on the sidelines. Personally, Civilization VI: Rise and Fall has done a spectacular job. The three new major systems — Era, Loyalty, and Emergencies — all promise to bring days or even weeks’ worth of gameplay time as you dive in and experiment. While the first two refresh old and familiar systems, it’s the new Emergency mechanic that shows the greatest promise, so long as Firaxis gives it a second look. The expansion does fail to address some of the franchise’s long-standing issues and, while disappointing, it merely maintains the status quo, not worsen things. Now that’s all said and done, it’s time to hunt for the next achievement.

Sid Meier’s Civilization VI: Rise and Fall is out now for PC.
Developed by Firaxis Games. Published by 2K Games.
A copy was provided for review.

Ade thinks there's nothing quite like a good game and a snug headcrab. He grew up with HIDEO KOJIMA's Metal Gear Solid, lives for RPGs, and is waiting for light guns to make their comeback.
Previous post Netflix’s Lost In Space reboot gets its first full-length trailer, debuts 13 April
Next post Nintendo Direct (Mar 2018): Smash Bros. and a whole bunch of ports announced for Switch