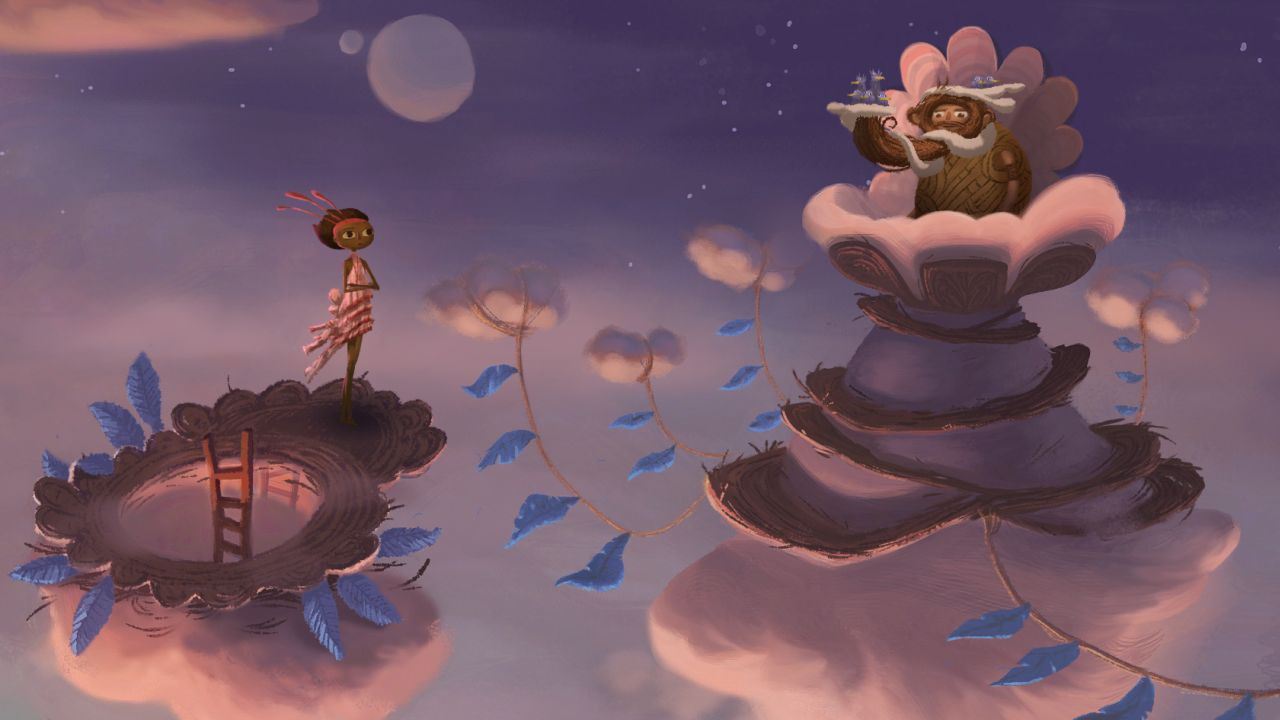 Tim Schafer earned renown by working on iconic adventure games in the ‘90s. With Broken Age he marks his return to the genre, riding on the back of a prolific Kickstarter campaign that raised millions. Now that we finally have the first half, it’s clear: He still has the magic.

A tale of two souls

Part of Broken Age’s appeal lies in its dual narrative. On one hand we have Vella Tartine (Masasa Moyo), a young baker girl with no intention of being a maiden sacrifice. In Shay Volta’s (Elijah Wood) case, he’s stuck aboard a spaceship run by an overprotective A.I. (Jennifer Hale), passing his days with “rescue missions” designed for young children. Vella’s tale is one steeped in adventure, taking her across villages as charismatic as her own. She’ll meet characters like Harm’ny Lightbeard (Jack Black), a man so obsessed with lightness that he shed a letter from his name. There’s Curtis (Wil Wheaton), the lumberjack who suspects that trees are out for revenge. And then there’s the talking tree, who confirms Curtis’ reputation as a furniture-making mass-murderer.

Shay’s story is, by design, far less exciting. It’s hard not to feel sorry for him, forced to a life of repetition. The breakfast cereals never change, the adventure simulations are the same, and dinner is always represented by a single pill. It’s no wonder he sighs all the time.

In a moment of defiance, Shay happily fumbles one mission and inadvertently meets Marek (David Kaufman), a stowaway in a wolf costume. The man’s proposition of saving real hostages is too good to pass up, and thus begins Shay’s real adventure.

Players can at any point swap between the two protagonists. It’ll pick up where you left off so there’s no missed content, though there is the risk of ruining the pace. However you choose to approach it, I feel that finishing Shay’s story first would have a bigger payoff in this half’s conclusion.

Fans of Schafer’s earlier work may find the humor in Broken Age fairly subdued. It’s certainly present but this is no Secret of Monkey Island or Day of the Tentacle. That said the game makes up for it by addressing, or hinting at, several important issues throughout.

Sometimes it’s as obvious as Vella breaking the maiden sacrifice trope and saving the day; other times it’s a tree admonishing humans for our reckless destruction of nature. And what of Shay, immediately trusting the mysterious Marek? Rather than feel overbearing, these themes simply add an extra sheen to an already enjoyable story.

The great presentation helps too. I couldn’t appreciate Broken Age’s design initially, what with all the other beautiful 2D games out there, but it didn’t take long for the stylized look to grow on me. There’s a painterly charm that’s reminiscent of the pixel-edged classics, not to mention the use of colors being to good effect. Here is an art style that supports the storytelling, rather than being the key selling point.

I’ve been naming the voice talents where possible because dialogue in an adventure game is crucial – a storyteller with bad delivery isn’t going to captivate many. While there’s the novelty of having celebrities, the majority of the cast actually do voice-acting for a living. And it shows, as each character you meet brims with life. Although Double Fine probably went over budget here, the end result almost seems justifiable.

Not too long on the puzzles

The biggest strength of Broken Age actually lies in its simple puzzles. I know purists might argue against this but adventure games can suffer from convoluted designs that end up doing more harm than good. Where this game is concerned story reigns supreme, and having the player stuck too long just won’t do. If it’s challenge you’re looking for then there are plenty of alternatives – Amanita Design’s Machinarium comes to mind.

As it turns out, the Steam listing for Broken Age promises the following key feature: “This one really hard puzzle that you won’t get but you’ll look it up online and not tell anybody.” Indeed, they delivered on that one during Vella’s part. Otherwise, the puzzles are all pretty intuitive, leaving me to my own devices. Interacting with everything on-screen out of curiosity and not necessity sure is liberating.

There’s not much else to the gameplay, really. It’s a point-and-click in the truest sense after all. The user interface is a lot cleaner, removing the traditional “Pick Up” and “Inspect” in favor of context-sensitive clicks. Don’t expect to find quick-time events here either because there are none.

If there’s one complaint I have it’ll be the lack of line-by-line text advancement. I played through Broken Age twice and the only option I was given is to skip the dialogue or cut scene entirely. Accidentally skipping something can pose a problem here. However, chances are that many won’t have to deal with these minor shortcomings.

A great pairing for everyone

Broken Age is a game I’d enjoy and happily endorse to family and friends. That honor has almost always gone to party games so it’s nice to add a lighthearted, story-centric title up on that pedestal. If you ever need to show how games can be more than score-chasing or digital violence, this is your example.

The only thing holding back a full recommendation is that Broken Age isn’t finished. Should that stop you from buying it? Not really, unless you hate the idea of waiting months for Part 2 or look at value from an hours-per-dollar perspective. Instead, what you get for your money is a charming little adventure that’s funny, insightful and honestly entertaining.

Yes, the second half coming “later this year” might not turn out as good. Even so, it’s a small risk worth taking for what Double Fine accomplished here.

THE VERDICT: PLAY IT

Broken Age is in development by Double Fine Productions for Windows, Mac and Linux. Part 1 is now available for US$24.99 (SG$30+) with Part 2 releasing later this year.

Ade thinks there's nothing quite like a good game and a snug headcrab. He grew up with HIDEO KOJIMA's Metal Gear Solid, lives for RPGs, and is waiting for light guns to make their comeback.
Previous post Broken Age Now Available on Steam
Next post SingTel Customers Will Be The First in Asia to Access The Elder Scrolls Online