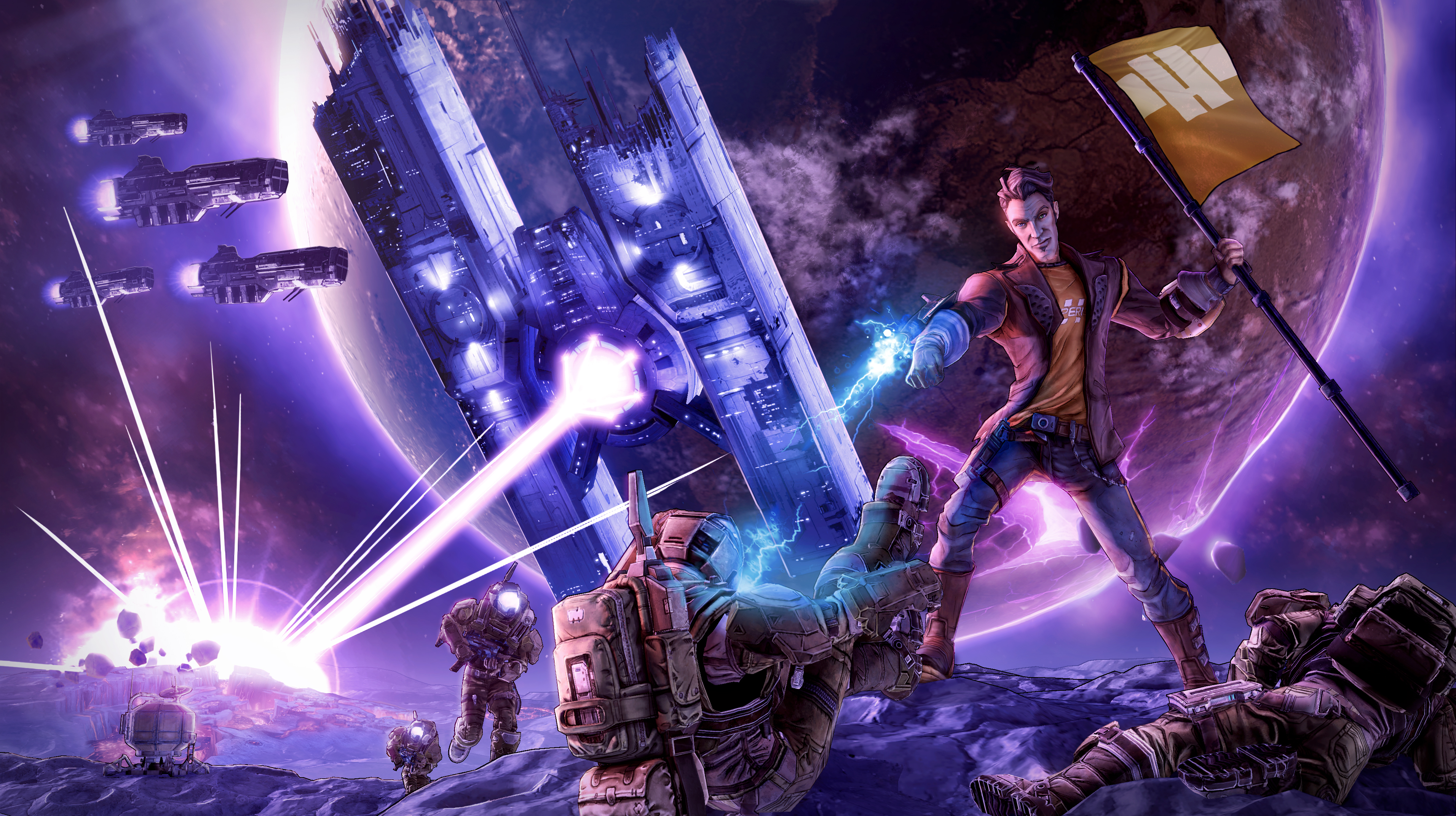 Going off-planet was the one expectation that Borderlands 2 gave us. That hope has now been realized with the release of Borderlands: The Pre-Sequel, except the furthest locale is the moon and chronologically we’ve stepped backwards. We’re basically playing a filler in a series that periodically re-announces itself with downloadable content. Even so, they’ve changed enough in the formula to make this worthy of consideration.

Borderlands: The Pre-Sequel was primarily developed by 2K Australia, with series creator Gearbox Software providing additional help. The result is a game so infused with Aussie slang and culture that I fully expect the folks down-under to colonize our own moon now. This was an intentional move set to contrast the Texan gruff of the previous titles and it works wonders, granting Pre-Sequel an identity in an already charismatic franchise.

The story is essentially a retelling. It begins with an outdoor interrogation, showing Lilith and her two surviving companions questioning Athena over her choice to work for Handsome Jack. As such, all narrative is delivered from Athena’s perspective, making it incredibly awkward when you’re playing alone on a different character.

Through her tale we get to see how a low-ranking Hyperion programmer called ‘John’ rose to become the megalomaniac that reigned over Pandora. It sheds plenty of light on Handsome Jack’s history, a little too much, and I questioned whether sympathizing with a villain was what this over-the-top series needed.

What caught me off-guard were a third-party’s involvement and the events towards the end. There’s a Vault but now there’s more to it than an anticlimactic boss fight. Everything leads up nicely to Borderlands 2 while drumming hype for the eventual Borderlands 3.

Things aren’t all serious of course, with other characters interjecting at times. Mr. Torque’s outbursts – lasers are favoured on the moon but “light doesn’t explode!” – and his loud showmanship remains memorable. The side quests are delightful too, such as finding suitors for Nurse Nina by gunning them down or assisting Sir Hammerlock with his questionable research. Just so everyone’s clear what this game is about, the moment the introductory cinematic ends there’ll be containers in the vicinity for you to loot. All this is nothing more than a chase for weapons, items and gear; from farming bosses to tackling harder difficulties. For a certain demographic this is just a slice of heaven.

Borderlands: The Pre-Sequel starts proper after you’re literally shot out of a cargo cannon and onto Pandora’s moon, Elpis. This is where I got my first taste of low-gravity and it wasn’t impressive. An hour later and I was air smashing as many things as possible. It gets incredibly fun since your air supply is tied to a new accessory and Borderlands loves customizing everything.

Therefore I’d crash to the ground for electric damage, discharging my low-capacity shields for a frost supernova, swiping Athena’s blade for a Bleed effect and shooting survivors with corrosive bullets. Add grenades into the mix and the monitor turns into a riot of colour.

Running out of air is never a concern due to an abundance of air canisters and fissures. Elements, however, now have a different hierarchy. Electricity is supreme as they take out shields and activate field generators, which in turn lets you use the effective fire element. Or maybe you just aim for their personal air bubbles to have them asphyxiate in some corner instead. Air in Borderlands: The Pre-Sequel is a game-changer in the way slag was for Borderlands 2.

There’s a host of other additions too. The Grinder is a vending machine that accepts three weapons of a certain grade and spits out one that’s better. It supplements the slot machines as a means of gambling, giving you reason to filter the loot you pick up. The Grinder can be further enhanced by using Moonstones, the new black market currency, in the hopes of getting the coveted Luneshine modifier (bonus experience etc.) on your weapon.

Yet it’s disappointing to see some of the issues with Borderlands 2 making a return – I had hoped these would be addressed by the next release. The biggest offender is the clunky inventory system once again. For a game about looting it’s simply unacceptable to spend more time navigating than sorting.

I’m also not fond of a group of hardened Vault Hunters showing up with nothing more than basic weapons and zero skill points. It’s jarring in terms of story and a little frustrating. Gearbox clearly wants to make Borderlands something long-term for players but to have all their efforts turn to naught with every new iteration is slightly off-putting. Pre-Sequel does reward you if it detects save files from previous games but it feels a little lacklustre. Perhaps a percentage bonus from past Badass ranks?

The four characters themselves don’t really warrant a mention in my opinion. They’re unique in the way past characters have been and don’t bring us anything new, so for all intents they get the job done.

That said Borderlands: The Pre-Sequel turned out to be a solid product. While it isn’t exactly a necessary entry it’s certainly a blast to play, and anyone in search of humour and gear chasing will find plenty of reasons to stay. If you’re going to play with friends then that recommendation is even stronger! With an inevitable slew of DLCs coming and new Gearbox Shift events there’ll be plenty to do in the coming months.

2K Australia showed a fine example of creating something unique within the constraints of an IP and I certainly hope to see more from the studio. Besides, who would have thought we’d get to see Moxxi out of character?

Borderlands: The Pre-Sequel is an RPG-FPS for PlayStation 3, Xbox 360, Windows, OS X, Linux and Steam OS. Developed by 2K Australia–Gearbox Software and published by 2K Games.

We recommend newcomers to play the games in release order.

A pre-release copy of the game was provided for this review.

Ade thinks there's nothing quite like a good game and a snug headcrab. He grew up with HIDEO KOJIMA's Metal Gear Solid, lives for RPGs, and is waiting for light guns to make their comeback.
Previous post Valkyria Chronicles and Dynasty Warriors 8: Empires Coming to PC
Next post World of Warships Developers' Diary: Aircraft Carrier