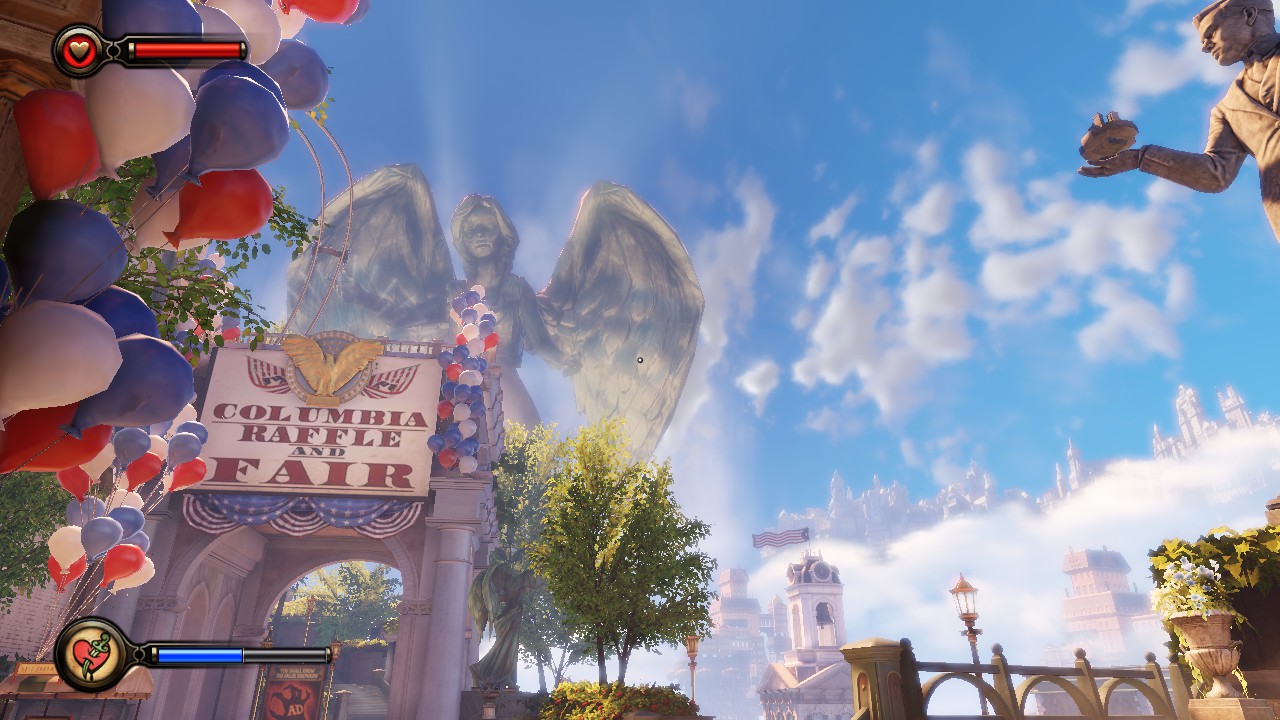 Bioshock takes us on a high as we go away from the underwater city of Rapture to one in the skies.

The third game in the Bioshock series takes the game to the sky city of Columbia. Players takes on the role of Booker DeWitt, a disgraced detective turned gun-for-hire hired for the rescue of Elizabeth, a girl held captive in a tower in Columbia.

Soon after the start of the game, Bioshock Infinite wallops you with the sky city’s Technicolour glory of 1912 America with graphics as bright as Columbia’s foretold future under the power of supposed prophet of God, Father Comstock. Until you are caught by the good citizens of Columbia for having the mark of the False Shepherd here to take “The Lamb” away as foretold in the prophecy of Comstock. Which takes us to the action-packed portion of our game.

Despite no links to the previous games, Bioshock Infinite plays no differently than the other titles in the franchise, except you have Elizabeth with you most of the time. She’s special. Really special. Despite being locked up in a tower all by herself, Elizabeth knows a whole lot about lockpicking and medicine, to pick safes, crack locks and revive you. She can also rip tears in space-time and create portals to other places outside of combat. “Whoa”, right?

Making a return to the game are the skills you attain from drinking funny chemicals, now known as Vigors. These Vigors range from pyrokinesis and electrocution to possession and having a murder of crows at your beck and call to engulf enemies with. On the PC version, they are assigned to the numbers 1 to 8. The various Vigors uses varied amounts of Salts, acquired by eating certain foods or downing a blue bottle of the stuff. The use of Vigors is highly beneficial during combat so you’ll always want to keep that meter filled.

The city’s roller-coaster-like Skyline system is made to be exploited using your grappling hook to traverse around them. Swinging on one before precariously jumping towards another in mid-air, they’re useful to swing around the playing field for enemy reconnaissance (you will be spotted, but at least you know where they are) or to move around quickly when cornered by enemies. The motion-sickness inducing fun rides also allow you to bypass the need to fight any enemies at all in some parts of the game.

Keeping you busy in the game are the assortment of enemies that all want you dead for some reason. The authoritative forces of Columbia who wants to stop you from corrupting Elizabeth any further, the members of the non-White uprising movement of the Vox Populi and horrible mechanised robots bearing the faces of the American founding fathers along with other mechanised turrets and guns. The human bunch vary further in class, capable of shooting rockets and throwing fireballs at you and the burly Handymen smashing you to bits as a confused mechanical hybrid.

Elizabeth displays all her skills as you need them during combat, occasionally tossing you health packs, ammunition she manages to find only when you’re in a pinch. Her space-time tearing abilities allows Booker to exploit it for his need of health, ammo and assistance from friendly mechanised killing machines. Only one tear can be left open at any one time, leaving players to decide if putting a wall for cover or dropping a turret into play is more important.

Booker is only capable of holding two weapons of any kind, aside from his collection of Vigors. The game offers upgrades and improvements for weapons and Vigors in exchange for cash you can find lying around. The more out-of-the-way stuff are the Gear you put on for special abilities like setting enemies on fire when you melee them or magically increasing your clip capacity as well as bottles of Infusions that adds to the maximum of your health, shield or salt meters.

As you can tell, there’s a whole lot of decision-making to do in this game, and not just limited to cash constraints or which meter to boost with an Infusion. Certain decisions you make in the storyline will tweak the way it plays out, but not to the extent that it will hand you a different ending. Choose to risk facing more gunfire and going out of your way can give you earlier access to certain Vigors.

The game’s storytelling drips by slowly as you piece it together gradually after fending off enemies group by group in the game, and soon, a simple rescue mission turns out to be so much more, wrapping your brain around theories of physics and your definition of reality. The world of 1912 Columbia shines with dapper and retrofuturism, all while hiding its appearance as a dystopian city where the minorities are racially and religiously discriminated. Nonetheless, the city streets are filled with people making the place seem very alive.

Players should also take a shine to Elizabeth almost immediately. Her initial bit of naiveté and constant charming personality make her extremely likeable, and not just because she’s your helpful “sidekick” who tosses you ammo, although it is due to this and you use of her abilities that you’ll feel the urgent need to keep her close to you not just to keep the story going.

But, with the aforementioned “one story ending” gameplay on a single-player game, you can’t be enthralled by what you’ve twice in succession. You can, however, be entertained by heading back into the game and collecting all the Voxaphone recordings (those giant portable record players that extend the story-telling) and looking through all the Kinetoscopes and sightseeing telescopes. Irrational games has also thrown in a mode of severe difficulty: 1999 Mode, where players can reach a no-win situation and are forced to redo a previous chapter or when they run out of money (more scarce here) to revive themselves.

The PC version appears to carry more weight in its retail form of 3 DVDs for hosting higher-resolution graphics. Some animation glitches were noted, like Elizabeth gliding across the ground, as well as animation stuttering. These did not appear to ruin any aspect of gameplay and combat, however.

Bioshock Infinite definitely plays well in my hands, having spent no time in the underwater city of Rapture. An entirely new world and accompanying fresh storyline is perfect for drawing fresh brethren to the FPS-RPG franchise. It’s lively cast of characters and roller-coaster storyline is plenty to keep you tucked in your seat to enjoy the ride.

Bioshock Infinite is a Irrational Games game for 2K Games for Windows PC, as well as the PlayStation 3 and Xbox 360. Steam version tested on a 2.30GHz Intel Core i7 PC running Windows 7 with a NVIDIA GeForce GT 650M. Screenshots derived from gameplay experience.