Review: The BenQ Zowie XL2540 240Hz monitor is a perfect fit for tournaments 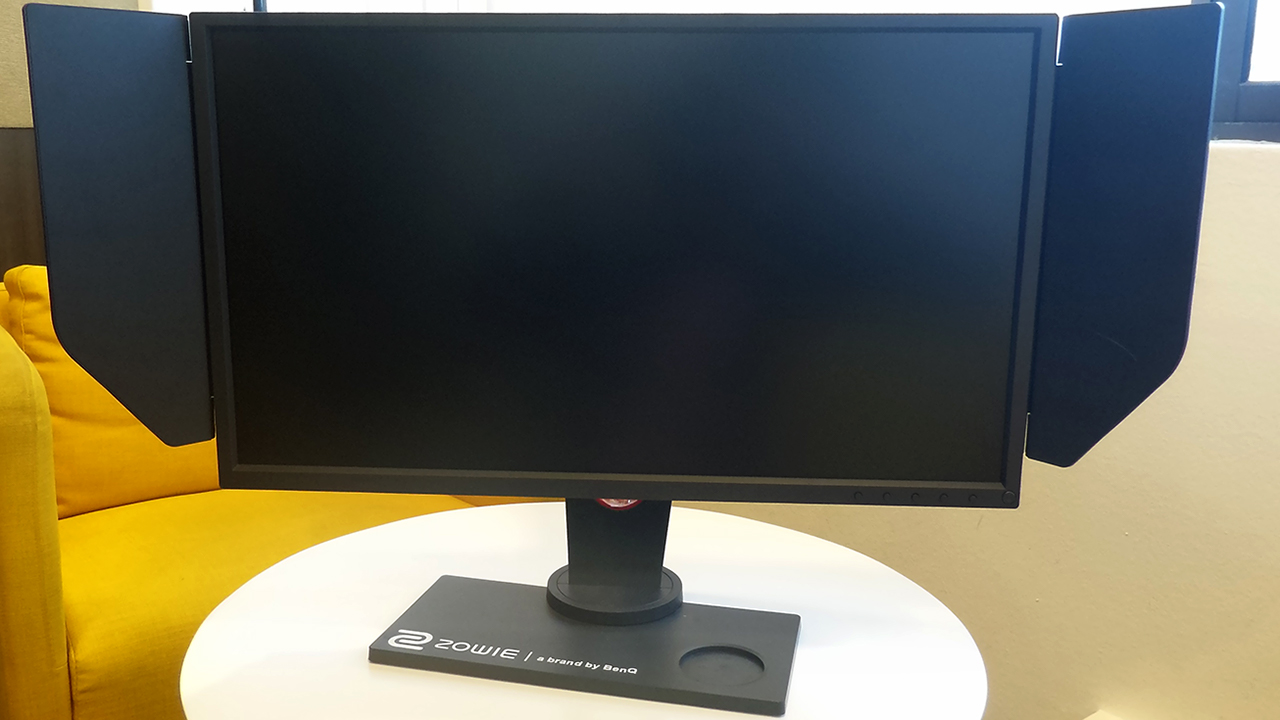 The BenQ Zowie XL2540 should not come as a surprise to anyone familiar with the brand. Best known for their great, no-frills gaming mice, the company also has a substantial presence in the talk of the town – esports – with an assortment of products catering to it. This 24.5-inch 1080p monitor is one such example, bringing forth BenQ’s expertise in display panels and Zowie’s focus on gaming to offer competitive players attractive terms such as “native 240Hz” and “1ms response time”.

There’s plenty to appreciate about the BenQ Zowie XL2540 in terms of design. Like their mice, the monitor is utilitarian but not completely devoid of personality. Dressed in matte black with small touches of red, the finish serves to keep your attention fully on the game at hand. Furthering this distraction-free concept are the beautifully thin bezels and, most eye-catching of all, a pair of matte shields on either side. 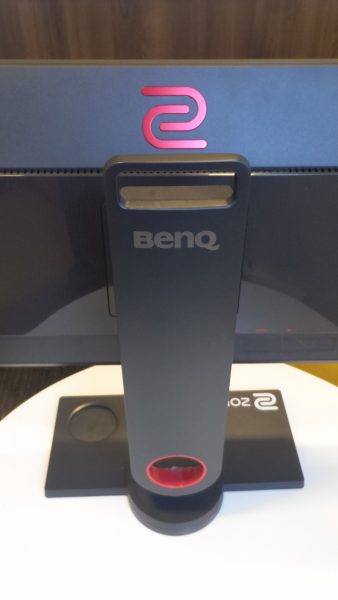 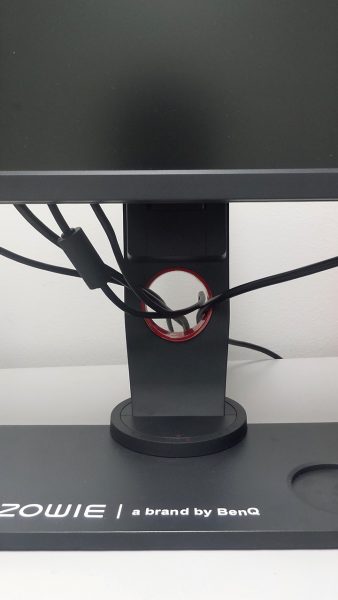 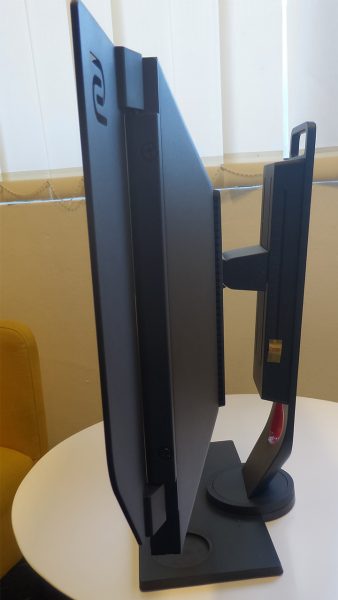 As such, the monitor is an excellent choice for on-site events, cutting away glare, reflections, and any flashes of movement or color that lie beyond the monitor but still within one’s peripheral vision. Accompanying all that is the BenQ Zowie XL2540’s great stand, allowing smooth adjustments to height, swivel, and tilt. Height markings on the side of the arm boost this monitor’s value at tournaments, where computers are used by multiple players within a single day.

Topping the stand is a carrying handle that inspires confidence in its ability to not wobble, come apart, or stress the monitor itself. Towards the bottom, a circular opening helps to keep cables neat without being overly fussy – think detachable panels or intricate routing, all of which eat precious set-up time. On the base is a small recess that accepts the included S Switch accessory, which quickly selects saved monitor settings while also being a more accessible way to navigate the on-screen menu. I’d also like to point out there are markings on the arm and base joint that show the degree of left and right rotation available. Again, features that shine at live events.

At home, these design considerations lose their killer appeal. Unless you’re constantly moving or adjusting your monitor, most of these will be forgotten in a matter of weeks. The shields seem moot when placing the monitor up against a wall too, though perhaps strictly competitive gamers may notice the difference. It’s also worth noting that these shields may appear cumbersome when used on a small desk, making for a visually cramped appearance. In all, however, this one of the more thoughtfully designed gaming monitors available, and is likely setting a precedent for what all esports-focused monitors should be to set-up, adjust, and operate. 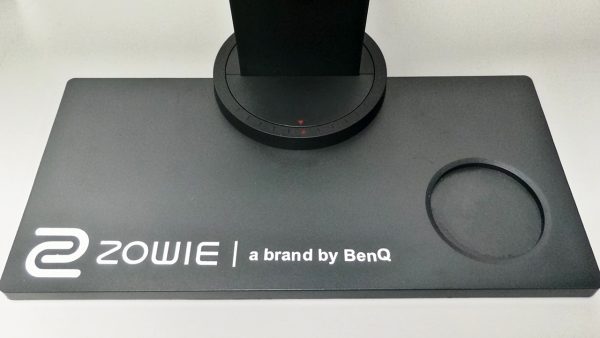 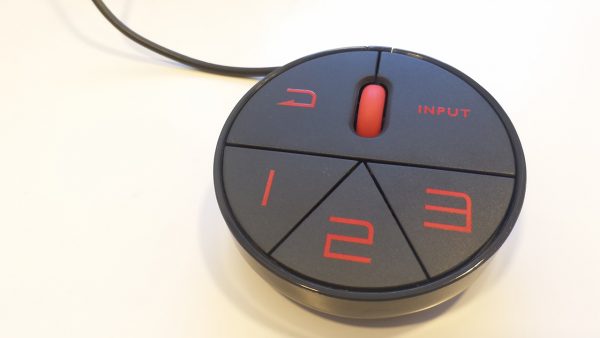 With competitive gaming in its blood, it’s clear that the BenQ Zowie XL2540 caters to a specific audience with specific needs. We’re looking at a 1920 × 1080 TN display whose strengths lie in delivering those high frames for a smooth and blur-free experience, not color reproduction. Therefore, you’re going to have to spend plenty of time tweaking in the menu for a color profile that looks right. There are eight presets available, three of which are for custom settings and are also the ones I’d recommend the most. In addition to these are extra features such as blur reduction, a low bluelight filter, and a little something called Advanced Motion Accelerator (AMA). You can set that last one to Off, High, and Premium to adjust the amount of response time overdrive; it’s best to see it in action for yourself but I’d recommend leaving it on High else it gets too aggressive, leaving behind trails and an oversharpened effect.

As for that 240Hz ceiling, keep in mind that you’re going to need a decently equipped PC capable of that level of performance in the first place, even if it’s “just” 1080p. Even then, in an age of console ports and high graphical fidelity, only a handful of games can reach that upper limit. While playing at 240Hz does feel a tad snappier and more responsive, the jump feels less apparent than going from 60Hz to 120Hz or more. It may be a case of diminishing returns or a good example of user backgrounds – someone who plays competitive shooters all day, every day, is likely going to notice a difference better than someone who jumps between gaming genres weekly.

Therefore, gaming preferences will largely inform a decision to purchase the somewhat pricey BenQ Zowie XL2540. FPS is by far the dominant target segment here, followed by strategy games (be they classic base-building or MOBAs) and racing. Forget about using it to watch movies or videos – it won’t leave you cringing but they’re not its intended use, and you’ll certainly feel the loss in quality when looking at other monitors. There is a color vibrance option in the menu but don’t get your hopes up.

The second key factor is in the type of graphics card you already have. The XL2540 uses FreeSync which only AMD supports. Essentially, it reduces screen tearing and, in FreeSync’s case, does so without input lag. All that’s required is a compatible AMD card and a DisplayPort cable.

The BenQ Zowie XL2540 is a monitor steeped in esports pedigree, so much so that it sacrifices versatility for its single-minded pursuit of competitive excellence. While a perfect fit for tournaments, enthusiasts are going to have be obsessed over titles such as Overwatch, Counter-Strike: Global Offensive, Dota 2, or League of Legends before they even consider jotting this down in their buying list. Those that fit the bill, however, will have plenty to enjoy once it arrives at their doorstep.

Ade thinks there's nothing quite like a good game and a snug headcrab. He grew up with HIDEO KOJIMA's Metal Gear Solid, lives for RPGs, and is waiting for light guns to make their comeback.
Previous post Fatal Fury’s Geese Howard kicks his way into Tekken 7
Next post Destiny 2 beta kicks off tomorrow, 19 July