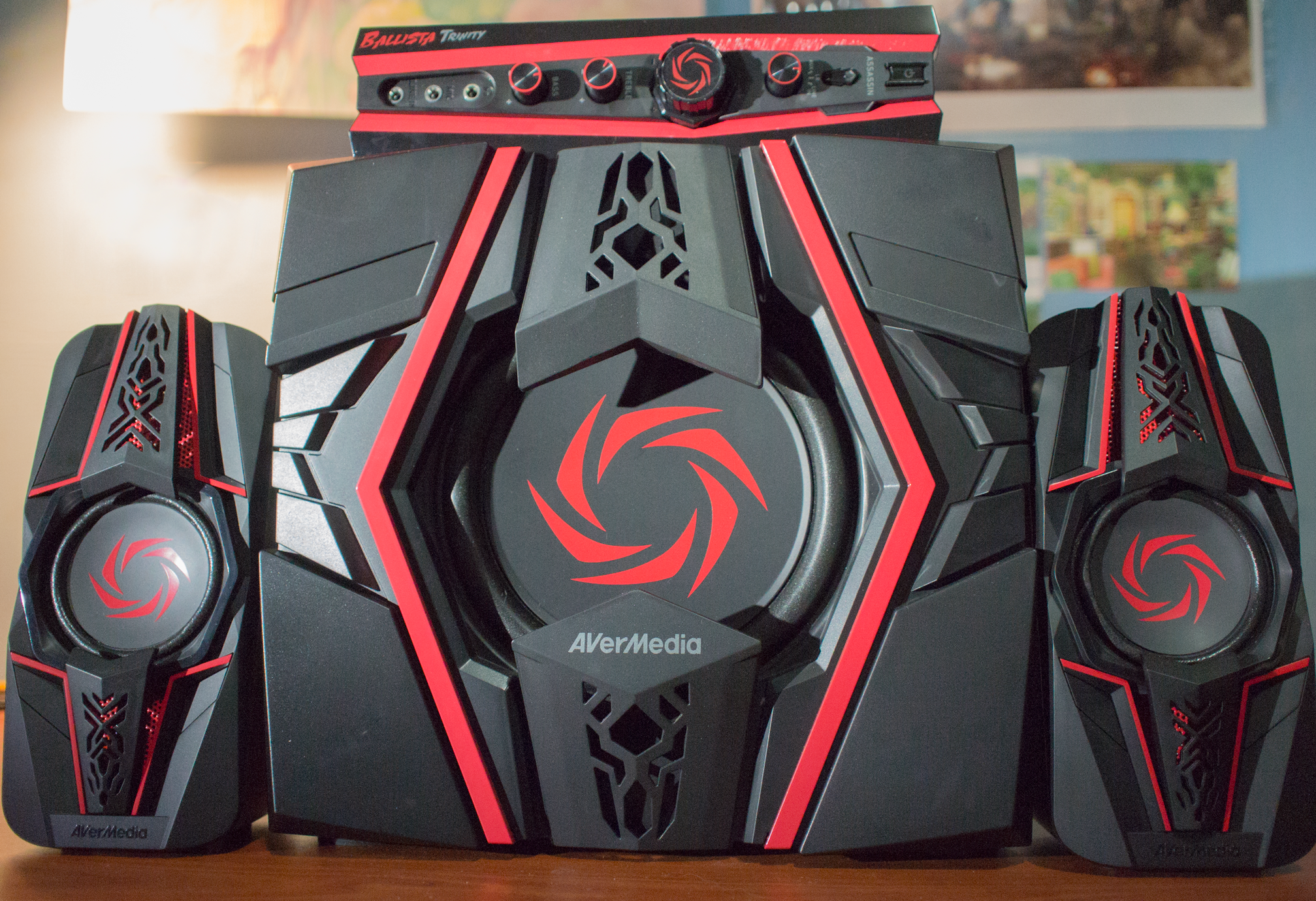 Diversify or die. After spending years riding on the backs of their video capture cards, AVerMedia Technologies have expanded their gaming presence with audio hardware. They’ve released not one but three products in a new speaker line, and I’ve been listening to their flagship, the Ballista Trinity, for a couple of weeks now. They’re off to a pretty good start.

Now, keep in mind that these are gaming speakers, which differ from regular multimedia speakers in any number of ways; these usually include loud designs, a modified sound signature, and some gimmicky feature or two for good measure. The Ballista Trinity ticks all of those boxes.

Plug in all the things

To cover the basics, this is a 2.1 speaker system. A single control box powers a 48-watts 6.5-inch subwoofer and a pair of 14.5-watts satellite speakers, outputting a total of 77 watts – promising plenty of punch in a small package. Within those satellites are 1-inch tweeters and 2.75-inch midrange drivers, sporting ceramic metal hybrid diaphragms.

The meat of its functionality comes from said control box, which connects to the loudspeakers by way of RCA cables. A single RCA to 3.5-milimeter cable connects to the source, which in this case is usually a PC or laptop, with an auxiliary port ready for a second device such as a console. On the front of the box, you’ll find a headphone jack and two 3.5mm ports for microphone and line audio respectively. A selector switch lets you choose which of the three source inputs to read.

Other fiddly items on the front are a large volume knob, adjustment dials for treble and bass, as well as buttons for power and “Assassin mode” (we’ll get to that). AVerMedia is kind enough to provide a spare 3.5mm cable in the box so we can immediately link up a second source.

The Ballista Trinity has been engineered for gaming, which translates into an emphasis on bass and highs at the expense of midrange capability.

That’s not to say it butchers vocals – there are plenty of worse options that do – but works such as Queen’s ‘Bohemian Rhapsody’ or Christopher Tin’s ‘Waloyo Yamoni’ simply don’t reach the presence that they deserve. Soundstage isn’t terribly expansive either but that’s to be expected for the price range, with adequate instrument separation.

Yet if your listening preferences lean towards the likes of Birdy Nam Nam, Daft Punk, and deadmau5 then I say you’re in capable hands. The bass may not be as tight as a standalone subwoofer though you do get power without it being muddy. Just be wary of overall distortion if you plan to crank it up beyond comfortable room listening levels.

To give a rough frame of reference, I bashed together a Spotify playlist featuring some of the songs I listened to:

I recommend spending some time playing around with the treble and bass dials to find a setting you’ll enjoy. While measurably better equipment can grant a better appreciation for voices and instruments (ask any audiophile convert), music listening is ultimately a personal matter – as the saying goes, “you do you.” For what it’s worth, my treble dial never exceeds the 11 o’clock position for fear of sibilance and ear fatigue, while bass halts at 12 out of respect for neighbors.

So does that make the Ballista Trinity a monster at games? That depends. If you’re a professional player then I’ll always point to a quality headset, as picking up audio cues and having properly separated voice chat is essential. If you’re simply kicking back on the weekends to get some Battlefield 1 time then you’re in for a blast – no, really, the amazing explosions in that game come rumbling to life here, punctuated by the crack of rifles and droning engines. It’s no surround system but it sure as hell is fun.

Dialogue and orchestral scores in titles such as Uncharted 4: A Thief’s End or Dark Souls III may not be at their individual best but it all comes together for an impressive presentation. Voices are reasonably clear during cut-scenes and combat, without getting drowned out by the on-screen action and soundtrack. If you’re looking for something to enhance your room gaming experience then this is an easy candidate – I’d be hesitant to use this for the living room.

As for movies, the Ballista Trinity gets the job done. I didn’t have time for a full sitting so I watched various scenes from ’13 Assassins’ and ‘The Last Samurai’ (because Nioh is coming soon), coming away pleased with what it manages to do. Similar to Uncharted 4, speech retains enough clarity for it to not be a distraction.

Let’s talk about that Assassin mode. AVerMedia describes it as the alternative to headsets for late-night gaming, maintaining “sharpness and details, even at lower volumes.” It does work to an extent, reminding me of the night setting in some pre-built home theater solutions. Personally, I rather plug in my headphones than deal with the altered sound; it isn’t unpleasant per se but the port is within reach, so I might as well use it. To be certain, I compared sound leakage from an open pair of headphones against the speaker’s Assassin mode and the former proved better.

I don’t care for the Ballista Trinity’s aesthetics either. The science fiction-esque tribal detailing serves no purpose other than to make me dread dusting, and the painted grills make it appear cheap. I can see how they’ve stuck by the design philosophy of their capture cards, with the aperture-bladed AVerMedia logo prominently plastered on every item, but it’s a look that simply doesn’t translate well to a speaker system. Thankfully, beauty is subjective and the red accents are easy to match with other gaming gear.

What I do love about the product are the three input ports on the control box, such that plugging in a mobile phone or even a console via 3.5mm is a breeze – try hooking up a Nintendo 3DS or PlayStation Vita if you have one. And as mentioned earlier, there’s easy headphone access when the need arises.

When it comes to build quality there isn’t much to say. Plenty of plastic is involved and the subwoofer is startlingly light; hauling it home and setting it up isn’t going to break you into a sweat. The satellite speakers can be wall-mounted as well, to both save desk space and get them up to ear-level, but the subwoofer’s short RCA cable can make positioning an unnecessary hassle.

I ought to mention the volume control knob too, which lowers and raises the value in steps instead of being a smooth linear transition – it’s mostly noticeable between the 9 and 10 o’clock positions. It hasn’t negatively impacted my time with it but it can be potentially annoying, especially if the setting you’re looking for falls somewhere in between.

If you’re coming from any sort of onboard audio then dedicated speakers are always an upgrade. Even if you have a high-end gaming laptop or already own headphones, the introduction of an actual subwoofer makes a world of a difference for those lower sonic ranges – it’s why movie theaters continue to exist.

At a retail price of $165, AVerMedia’s Ballista Trinity 2.1 gaming speakers serve admirably for its intended purpose, while managing to pull double-duty for movies. Pair it with good music headphones and you’ll have all of your audio needs met.

Ade thinks there's nothing quite like a good game and a snug headcrab. He grew up with HIDEO KOJIMA's Metal Gear Solid, lives for RPGs, and is waiting for light guns to make their comeback.
Previous post Review: Kingdom Hearts HD II.8 Final Chapter Prologue
Next post ASUS reveals the ROG XG Station 2, an $888 external graphics dock