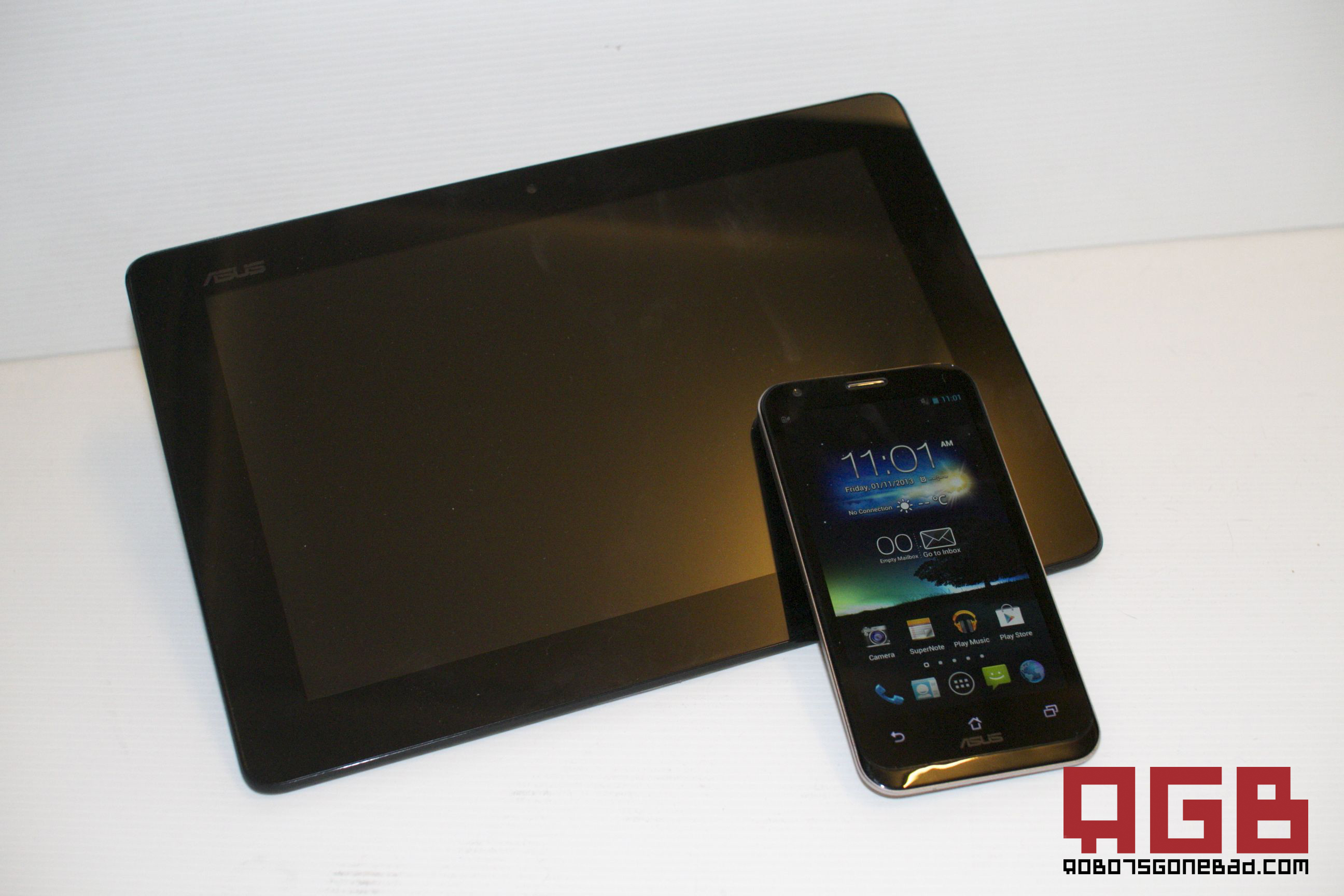 The second, more polished iteration of ASUS’s iconic Padfone, the ASUS Padfone 2 is less tablet and more phone. The accompanying tablet doesn’t work without the phone docked into it – the tablet is really just an extension of the phone. Read on to find out what I thought of it.

Both the tablet and the phone share the same aesthetic quality with sleek, rounded edges. The phone looks a little higher quality in comparison, which makes sense since it’s probably going to be the bit you’re toting about in public most often. The phone comes with a metal trim as well as a textured backpiece for better grip, and its metal power and volume buttons are nice and sturdy.

The neat, fuss-free aesthetics translate nicely to the phone’s display, which is made out of scratch-resistant Corning glass with an anti-fingerprint coating. While the Padfone 2 still picks up fingerprints, especially on the tablet, smudges are noticeably less obvious when compared to my Samsung Galaxy SII. Overall, the touchscreens of both the Padfone’s components are pretty responsive as well.

The Padfone 2 boasts a 1.5 GHz quad core processor, making it more powerful than both the Galaxy SIII and the iPhone 5. Combined with its stock Ice Cream Sandwich OS, it’s a great phone to tinker with right out of the box.

Its 13-megapixel camera is also the best I’ve ever seen on a phone camera, beating the Galaxy SIII and iPhone 5 hands down. With a resolution a whole 5 megapixels higher than either of those two market leaders, the Padfone 2’s camera has a crazy f/2.4 aperture, native 60fps video recording, and the fastest shutter speed I’ve ever encountered on a mobile phone camera. With so much power and precision packed into its casing, it’s a wonder the phone doesn’t weigh more than 135g.

Battery life for the phone is also pretty impressive. While our review unit didn’t quite measure up to the factory specs’ claim of having 16 hours of 3G talk time and 336 hours of 3G standby time, it did get through nearly two whole days with the Wi-Fi switch turned on.

Then we have the tablet. Completely unuseable without the phone, it provides a nice, high-resolution display for you to show your pictures off through. You can also make calls and take photographs while having the Padfone docked in the tablet, but apart from the larger screen? There’s nothing else the tablet adds to your life. The screen’s lower resolution, as compared to current Android tablets and the iPad 4th Gen, also added to the disappointment.

ASUS has, at least, listened to comments on its first Padfone. Docking the phone in the tablet is now easier than ever – all you have to do is slide it in. The tablet vibrates when the phone is properly docked, and the switch from phone screen to tablet screen is just a little bit short of instantaneous. It also runs on its own individual battery, and both components’ battery lives are displayed in a corner of the home screen.

The Padfone 2 is a pretty powerful piece of technology when considered just for the phone component. As a tablet, it falls rather short of what was expected. Supporters argue that the phone is a great deal because of its 2-in-1 concept, with prices starting at S$1,099; however, I feel that the tablets should have been sold as an optional accessory – and thus lowering the price of the smartphone.

Verdict? If you need a new phone and are a mobile-phone-camera enthusiast, consider the Padfone 2. The tablet makes for great photo viewing on the fly.