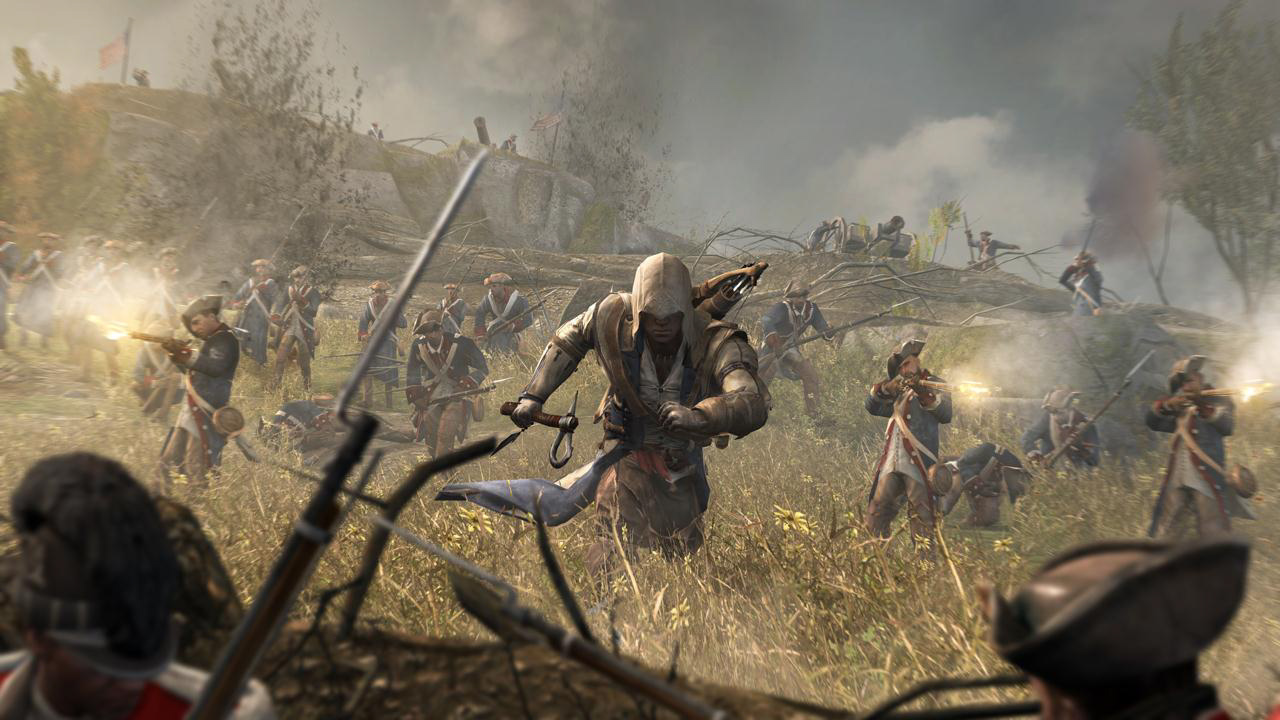 Desmond Miles leads a complicated life compared to most young men. Not only does he have to contend with a strained working relationship with his father, but he is also tasked with saving the world by reliving his ancestors’ memories. This seemingly complex narrative is matched by Assassin’s Creed III’s constituent parts; a game with so many gameplay elements that I often found myself wondering how Ubisoft managed to put it all together. Yet they did, and in doing so, graced the world with one of the biggest games of 2012.

The stars of the AC games, however, have never been Desmond. For all his consistency and growing significance across the five console titles, many people would instead relate with his ancestors Altaïr of Syria, or Ezio of Florence. Not Desmond of South Dakota. Now another name gets added to that list: Ratonhnhaké:ton, or rather, Connor, of British America.

The bulk of Assassin’s Creed III takes place during the American Revolution, undeniably a momentous period in history. Admirably, the developers have presented an objective look at the settings and characters present in the game. There’s no vilifying of the British Empire or excessive lauding of American heroes. No, the game recreates history as faithfully as possible, and what we get in the end are the hard truths of slavery, racism and war.

Not that the game chooses to comment upon it. Instead, ACIII uses these as a backdrop for their fictional war between the Assassins and Templars. That’s what the games have always been about, and this time it’s no different.

So just who is Connor? He’s the child of an English father and a Native American mother, raised in the latter’s village and later joining the Assassins in his teenage years. In his duty to both the Assassins and his tribe, he’ll soon become embroiled in the Revolution, fighting both the Redcoats and Bluecoats to best suit his agenda. The game introduces you to Connor while he’s still a child, fast-forwarding to pivotal events until we reach his neck-stabbing prime.

His story isn’t as flamboyant as Ezio’s, or as calculating as Altaïr’s; it’s cold and direct, his sometimes unpleasant personality wanting nothing more than to see the undoing of his enemies. The change is refreshing though a little heart-breaking, as we see a boy-turned-Assassin learn that there are some things in the world that you just can’t change. Or protect.

The changes in Assassin’s Creed III have been, for the most part, improvements to the series. The new control scheme isn’t as big a departure as I had thought (keeping in mind the last Assassin’s Creed I played on a console was the very first one). Movement now felt a bit less “sticky” when it comes to terrain and objects, although there are moments where you still end up going somewhere unintended.

I arrogantly waded into my first few combats thinking it’ll be a breeze, just like its predecessors have been. After all, I just needed to wait to pull off a block and parry, right? Not quite. Enemies are now more challenging, shattering both my defences and ego as I clumsily stumbled in the midst of a million (alright, there were only four) opponents.  It’s no Dark Souls but it does make getting into a fight actually exciting, and the game happily rewards good play with a series of beautifully animated kills. Firing off a shot from your flintlock pistol in-between slashes and stabs makes for great cinematic moments too.

City populations have increased again, pumping much more vitality into your urban playground; quite a feat considering the hardware’s age. Messing with the NPCs provided a great round of entertainment (like in most sandboxes), my shenanigan of choice being to toss coins onto the street and then methodically pickpocketing the scrabbling individuals.

When I’m not being a jerk or fulfilling my destiny, the civilian population plays host to a variety of side-missions. They’re a little less repetitive now while collectible side-quests, such as Benjamin Franklin’s missing almanac pages, are given a much-needed dose of interactivity by having the pages fly away in the wind once spotted. Just how Assassins identify scattered pages from flyers and other litter must surely be a highly-guarded secret.

The grand-daddy of side-questing in Assassin’s Creed III is, hands down, the ship sections. You could even mistake it for an entirely different game and I wouldn’t be surprised if Ubisoft decides to create DLC or a downloadable spin-off. Quite simply, Connor will take command of an upgradeable ship to wreck other ships. Aptly named “Aquila”, the vessel will have you making use of wind, waves and positioning to effectively reduce your opponents to flotsam. Other than epic naval skirmishes, your ship can also be used for trading that nets you discounts later on.

Tire of the city or the seas? Then indulge your senses as you explore the wilderness of colonial America, home to all manner of creatures big and small. You may hunt them if you like and there are missions that have you traversing through nature. Personally, however, I prefer to just bask in the sights and sounds. In this aspect, it feels similar to Red Dead Redemption. Or should I say, familiar? And that’s a good thing, because those contemplative moments are something that’s hard to come by.

When it comes to the forest though, there’s something far more important in ACIII that’s absent in its cowboy counterpart, and that’s trees; more specifically, navigating them.

You get on your first tree in-game as teenage Connor, there to help his friend (don’t talk about his weight) climb his very own. On hindsight Connor doesn’t exactly help him much, but it was all forgotten once I started running and climbing on branches. It was amazing. The first Assassin’s Creed blew me away with the climbing and parkour and now ACIII has done it again. You could argue it feels slightly linear in terms of where you can navigate once you’re in the treeline, though the same can be said of the city environments. There are places where you can or can’t go and they’re all very intuitive.

Not to say that the game doesn’t suffer from its quirks. Horse-riding needs work, especially when keeping comparisons to Red Dead Redemption in mind. The combat is still dependant on the block-and-parry mechanic once you get a feel for it. There’s no dedicated button for stealth navigation, so you sometimes end up standing on crates or standing up between grass patches in plain sight of everyone. Cutscenes are bracketed by fade-to-white transitions that get annoying. But the biggest drawback of all, something I’ve avoided mentioning until now, is the lengthy introduction.

Actually, calling it a prologue would be far more suitable. You start the game not with child Connor, but with Haytham Kenway, his father. Going into the details of it would be a disservice to the plot, but for all the good it brings, I cannot help but feel dissatisfied.

Not by any fault of its own, but by the decision to preface the “real” game behind ACIII by nearly four hours worth of introduction. A nagging voice at the back of my head kept asking “When do I get to Connor? Where is Connor? Do I get to play as Connor now?” for the entire duration of Kenway’s arc, and that’s a real shame. I suppose Ubisoft meant to keep it as a surprise – and a surprise it really is – though I would have preferred for the prologue to be indicated as such.

Assassin’s Creed III is also home to a bunch of bugs, most of them being cosmetic. The one game-breaking encounter I had was when I ran past all the soldiers, up a flight of stairs and straight into my target and his retinue of guards. I dual-assassinated the first pair and when I got back up, found myself jerkily floating around and invisible to enemy AI. Just as I considered resetting the console, I manage to kill another pair of guards which, thankfully, plopped me back in the correct physical dimension.

The visual bugs aren’t worth getting up in arms over, in my experience. Disappearing bodies, AI path-finding hiccups and bizarre ragdoll physics in cramped areas simply made me laugh rather than frown.

After all, it’s hard to immerse myself in a game where walking around town heavily-armed and dressed suspiciously doesn’t raise eyebrows; or when guards couldn’t be bothered about their colleagues no more than three hundred meters away getting shot at. Or, most perplexing of all, how hanging off a box seat’s balcony in a fully occupied theatre, in plain sight of everyone, isn’t in the least bit alarming.

Ultimately, Assassin’s Creed III turned out to be an ambitious project that managed to deliver. It even manages to wow audiences, this late into the series’ timeline. Ubisoft have done a great job in creating a sequel and if you’ve skipped out on the past few AC titles, you shouldn’t miss out on this.

As for Desmond of South Dakota, the rare individual with so grand a lineage… well, you’ll just have to play and find out.

Assassin’s Creed III is an action-adventure game developed by Ubisoft and is now available for the PS3 and Xbox 360. It’ll be released for the PC and the WiiU in the near future.

Ade thinks there's nothing quite like a good game and a snug headcrab. He grew up with HIDEO KOJIMA's Metal Gear Solid, lives for RPGs, and is waiting for light guns to make their comeback.
Previous post World Of Warcraft: A Love Letter to Azeroth Part 2
Next post Wargaming.net Strikes Out On Its Own