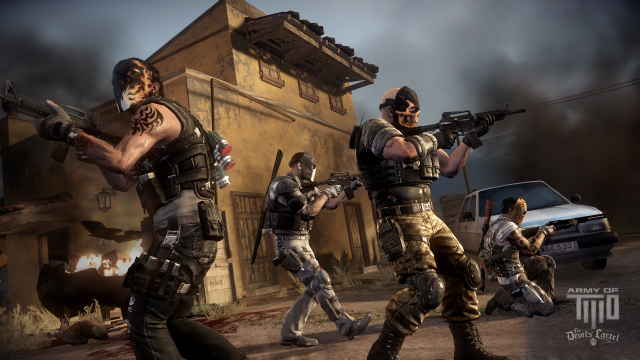 What do you get when you take a bunch of mercenaries, a Mexican politician, an angry Cartel and several well-aimed RPGs?

You may have played Army of TWO’s earlier games as the mercenaries Salem and Rios, but the team T.W.O. are reassigning these new recruits under your control, along with a new game engine and more fast-paced action. Your primary objective in this game is the protection of an important Mexican politician from the La Guãdanã cartel. Players will soon discover the value of this politician’s head as things don’t play so well.

Alpha and Bravo are your two unnamed recruits which the game walks you through their final training exam. The staple of the series naturally makes a return. Gameplay through use of co-operation and cover, useful for flanking a chaingun, as the training deals out. The new implementation of TWOVision is practically useless, however, once common sense takes over.

In the real missions, the co-op factor is raised when a choice of who gets to go where and cover who is given from time to time. It won’t be before long until you get your guns out and take out some cartel. You’ll be getting some heavy fire so diving into cover would be wise. The cover system, covered well in the tutorial, allows player to sprint to another cover up front or adjacent.

The realism of how cover crumbles or explodes under gunfire or grenades is welcome, so you are flushed out and are forced to move around. But that’s all you’ll be basically be doing, aside from the several turret firing and vehicular combat, as the game will begin to gain repetitiveness, feeling like an arcade rail shooter.

The common enemies aren’t much of a fight, either. Some are just plain crazy enough to charge at you without a gun. Some have RPGs, some are snipers, but the positions of these thugs are well reachable with a good M4 or AK47, the common guns. Brutes, with the heavier firepower appear later in the game, so that’s your cue to get some more efficient weapons.

More advanced weaponry, each with their own pros, cons and attachments, are made available as you reach a higher Rank through XP. There’s a host of weapons to customise your loadout with, although I did feel my default loadout were more that sufficient to see me through the game.

Unless, you don’t think you need weapons. Well, you do, but making a return from the original game is the Overkill power-up, that fills up the more fancy your shooting gets. Overkill grants the characters in play unlimited firepower and grenades, brutally pulverising your enemy into minced meat.

Players fully into the game may not notice the glum, gritty brown environment most of the game takes place in. Aside from the futility of the AI Mexican police forces, these areas are only swarming with the Cartel, as the Mexican populous appear to be too scared to appear in a constant war zone. I must say, however, that the story has more sense than the last Cartel game it brings to mind in the form of Call of Juarez: The Cartel, but not a whole lot.

The game plays just over 7-8 hours with several “Gears of War: Judgment”-type intermissions for breathing room. It’s good that your substantial AI partner is able to take care of himself without a whole lot of AI babysitting, apart from the times he says hello to an RPG. The game can play better with another human, whether through local splitscreen or online co-op, as the AI can sometimes get stuck in its own surroundings.

If you don’t need a whole lot in your average third-person shooter game, then you and a friend may enjoy The Devil’s Cartel, but if you still have other shooter games in your queue, there’s really no rush to have a go at this one.

ARMY OF TWO: THE DEVIL’S CARTEL (PS3)
THE VERDICT: BORROW IT

Army of TWO: The Devil’s Cartel is a Visceral Montreal game for EA Montreal for the PlayStation 3 as well as the Xbox 360.