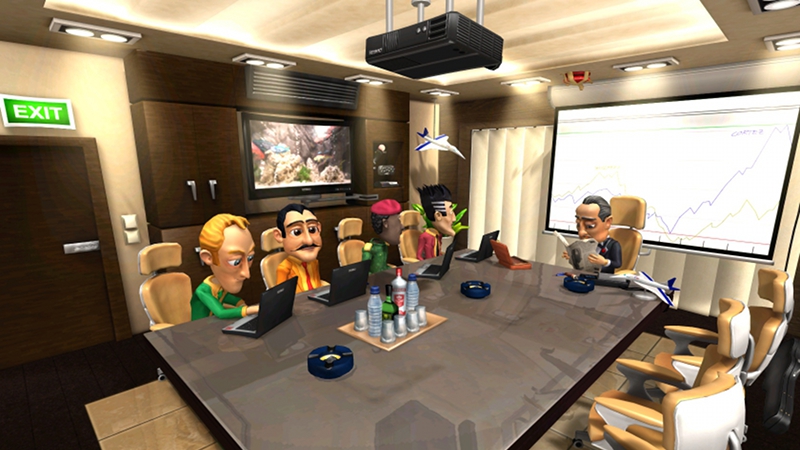 In the midst of all the mangled server business on that other simulation game, I thought maybe I could take the time and manage my own airline.

The objective of this simulation is, naturally, to run your airline business so it’ll soar in profits. The game suggests players not to take itself seriously, so it’s not all that realistic, but don’t be fooled. The game has quite a bit of depth.

The game walks you in with a bit of a tutorial after you select your character and airline, each of which varies in personality and special ability, such as being able to be in the good books with celebrities and their agencies or obtaining cheap fuel.

Players can get their airline going with the purchase of their first plane, which also comes various shapes in sizes, along with various upgrades the player might want to add on to maximise seating, plane speed and travel range. From there, players can customise their fleet from inside and out, upgrading the creature comfort features of their planes. If that’s too expensive, you could always look for a clunker in the garage that’s in need of some fixing up.

Then comes in the ability to staff your airline with some competent (or incompetent) people. The more skilled they are, the higher their wages, although there are times you can grab a highly-skilled worker for a lower pay, so keep checking with your HR department from time to time. After a bit of the hands-on work managing your airline, it’s up to you to dot in flights in the flight plan for the day. After speaking with the manager, you’ll be allowed to take control of the flight paths you choose to rent from him for a fee. My game started me off with Frankfurt-London return flights and I had within my working hours to plan the flights I wanted my plane to take for the day, or the week, including bits of scheduled maintenance so your plane won’t face any issues as it continues flying through and fro. Thankfully, you don’t have to constantly add flights as, when you get confident enough, can repeat your flight plan for the upcoming days.

Here’s the problem I had with the flight planning. The game didn’t exactly specify if flights were allowed to be planned outside of your working hours. After all, you would like full control of your airline. It didn’t occur to me until a bit later that you could schedule flights beyond your working hours and leave your sole plane your trusted crew.

There are plenty of other things left to the player to interpret. Something that folks who don’t flip through the manual would miss is the ability to skip long walks around the terminal by warping to where you need to be with a press of a keyboard shortcut, leaving them to drag their little avatar to tell it where to go and you can spend precious time especially if you need to plan flights for the day.

Having to hover my cursor every button is also a bit of a frustration because the overall user interface of the game is a rather messy. For example, I could see the skill level of my employees when I hire them in the personnel department, but not when I assign them to planes, leaving me to guess if my $4,000 guy is the discount Level 5 pilot or some guy I don’t need on my staff anymore.

Another thing about the game is that it sometimes doesn’t explain why the other AI airlines are doing better than me despite my best efforts to drop all my cash into posh interiors and good catering, and you can’t exactly find out what’s going on unless you scrutinise the statistics amongst you and your rivals, but even then it feels like you’re doing the same things they are, so what are you doing wrong? Little bit of frustration aside, the game does look pretty nice. The cartoony airports has its charm and the vibrancy to entice young entrepreneurs into this game. Almost every bit of the game has a voice when you communicate with people around the airport, and those with fully-voiced roles deserve some merit for the many lines put in the game that can be easily overlooked by impatient players.

Despite having a harsh-to-deal-with user interface and some minor gameplay worries, Airline Tycoon isn’t all that bad. But with a little improvement and a bit more streamlining on the controls and UI, this game could’ve made its mark.