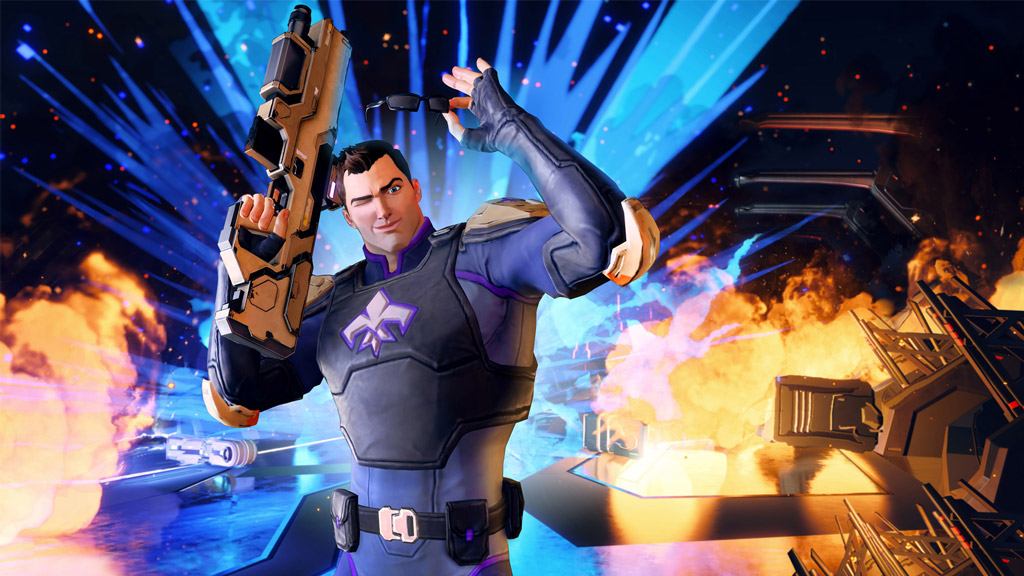 When Saints Row first came out, gamers pegged it as a Grand Theft Auto clone. To many extents, they weren’t wrong. It wasn’t until the sequels that the Saints Row series stood out on its own with its whimsical game play. Considering that, it’s fitting then that the new Agents of Mayhem looks and feels a lot like it.

Agents of Mayhem is an alternate spin on the Saints Row games. Born from a choice in one of Saints Row: Gat out of Hell’s many endings, in this reality, the events of the Saints Row games never happened. Instead, a shadowy organization that calls itself L.E.G.I.O.N. now dominates most of the world, with only M.A.Y.H.E.M. capable of opposing them. Seoul is currently being targeted by L.E.G.I.O.N., which is where the game kicks off.

Think of the agents as G.I. Joes and you’ll have a great idea of what to expect. While you’ll initially only start off with three agents (Hollywood, Fortune and Hardtack), the roster soon expands to a comfortable 12 (not including Johnny Gat, who is a pre-order character) unique playable characters. You’ll find a few familiar faces too, but in this reality, they’re radically different from their Saints Row, or in the case of Ultor, Red Faction, counterparts.

Like the Joes, the agents even have their own PSAs (Public Service Announcements) when they’re porting back to the ARK for a hiatus. If you grew up in the 80’s or 90’s you’ll get a kick out of it. Plus, all of the game’s cutscenes are animated. Whether it’s a scene introducing new agents or enemies, or a mission brief, the cutscenes are all terrific to watch and add to the game’s 80’s cartoon vibe.

While Agents of Mayhem has many strong points, there are some features that I took issues with. One of them is navigation. The lack of a mini-map made finding locations or enemies near you difficult. Objectives and enemies are highlighted with annoyingly small icons on the HUD, making searching for items or foes that are out of your view an exercise in annoyance. You can press triangle (on the PS4 controller) to initiate a 360-degree scan that highlights enemies and objects of interest, but the effect fades in just a few seconds.

Driving vehicles for missions or to travel long distances quickly, feels more like a punishment than a choice. With no air vehicles, traversing Seoul comes down to using your agents (which is fun but slow) or calling in a M.A.Y.H.E.M. vehicle delivery, which delivers a preselected vehicle for you. I also wished there were more variety of vehicle types in Agents of Mayhem. Where are the tanks, bikes or any other vehicle with guns, other than the generic cars and SUVS?

Repetition in the game also made it boring after a while. While there are a ton of activities you can do, they repeat. A LOT. You can retake bases, invade L.E.G.I.O.N. bases, take out targets of opportunities and other activities but these are monotonous and do little to tie in with the overall story. While fun, these activities get tedious fast too. Sadly, you’re forced to do quite a number of these ‘optional’ objectives, at least if you’re trying to get enough materials to build your Gremlin tech and Intel files for the game’s Global Conflict mode, where you send agents on timed missions against L.E.G.I.O.N.

Enough about the bad stuffs though…let’s get down to the juicy bits. Agents of Mayhem does a lot of things right too. For one, the dialogue is much better than any of the Saints Row games. The humor is more nuanced now and the homages are awesome.

Each of the agents have their own quirks and personalities and it’s great fun trying them all out to find your favorite. That’s easier said than done though, as each agent doesn’t only have their own unique weapon and skills, they also can be customized even further with unlockable gadgets, core upgrades and L.E.G.I.O.N. tech. It’s almost a mini-game in itself trying to build the perfect team, which is a surprisingly fun (and totally unexpected) facet of the customization that the game offers. In fact, the customization goes beyond gameplay, and dips its toes into geeky fan service.

One of the characters, for instance, Braddock, is pretty much a giant wink to Aliens/Predator fans. She looks like Sergeant Apone from Aliens (though some might also argue that she could be inspired by Predator’s Dutch Shaefer), her agent story missions are against enemies with VERY familiar names taken from the series too, and she has unlockable skins that reference back to the movies. She’s not the only one either! Nearly all of the Agents have a nod and a wink to other pop culture references, such as Kama’s Green Arrow-inspired gear or Yeti’s Hulk skin.

Lovable agents aside, all of them play differently in battle. Braddock uses a three-burst assault rifle, an unlockable missile secondary skill and an orbital laser. Play as Scheherazade and it’s all melee combat and stealth. Luckily, Agents of Mayhem allows you to bring three different agents into the field with you, so you can freely swap between them at any time.

Your agents also gain XP as you play, and they’ll get stronger as they level up. Once you hit Level 10, your second specialization (special characteristics for each agent) opens up. Hit the Level 20 cap however and XP stops being useful. From there on out, you’ll need upgrade cores to level them. There’s a lot of customization depth in the game and its one of the best parts of Agents of Mayhem.

Visually, the game has its charm. There’s a very subtle celshading-style to it, and while it doesn’t evoke a cartoony feel, it does reference back to a lot of the art styles seen in 80’s cartoons. On a PS4 Pro, the frame rate is mostly stable too, only dropping a tad when the action heats up. However, object pop-ins (pedestrians, trash cans…etc) are rather noticeable, especially when you’re driving fast.

All in all, while Agents of Mayhem is sort of a spin-off from the Saints Row franchise, it really does play more like, say, Crackdown for comparison’s sake. Like many open-world games, Agents of Mayhem also suffers from being repetitive with its optional and side missions. But if you could get past this, or if you are a completion-ist type of gamer, you will find that Agents of Mayhem can be quite enjoyable in its own little ways.

Sal's just your average hardcore gamer. He started gaming on the NES in the 80s and has been ever playing since. Sal doesn't care about which platforms games are on, only that he wants to play them all!
Previous post Vainglory gets Mouse and Keyboard support with Samsung DeX
Next post Dragon Ball FighterZ will be released in February 2018, CollectorZ Edition & Story Mode revealed