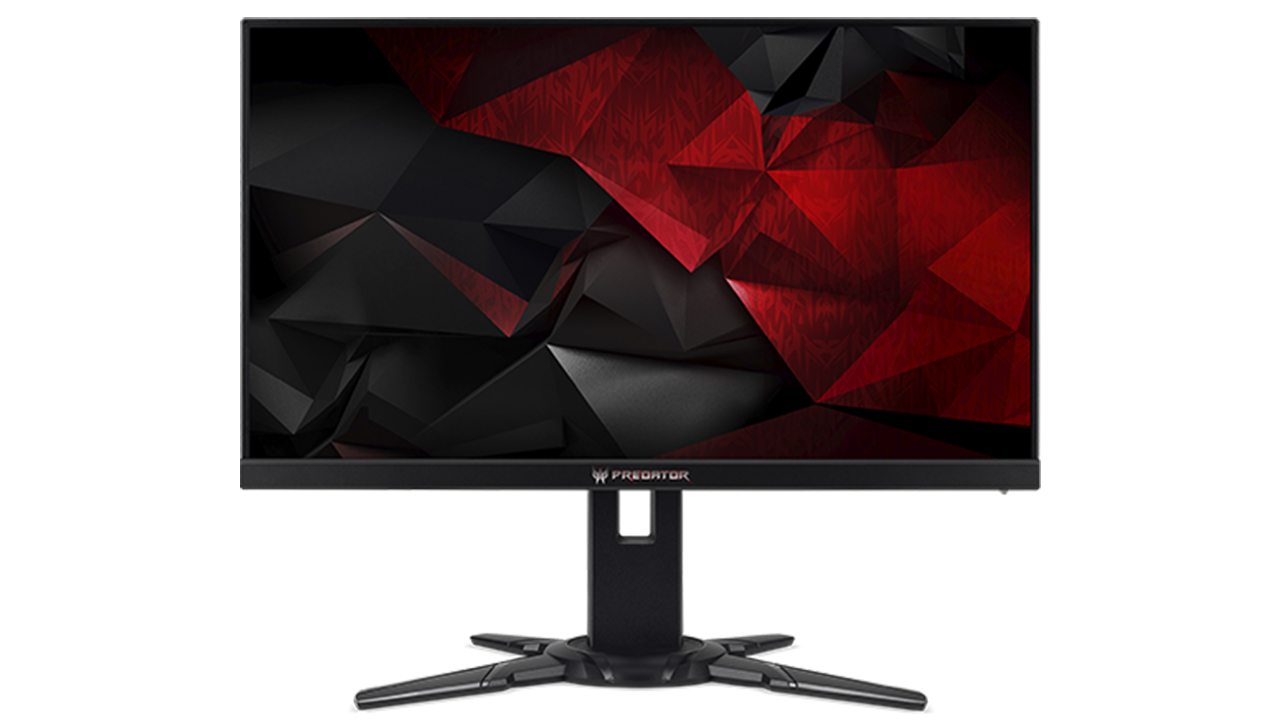 The 240Hz battle royale isn’t over, with the Acer Predator XB252Q sliding in as our final entry for 2017. A 24.5-inch TN panel with a 1920×1080 resolution, 1ms response time, and G-Sync, the monitor ranks similarly among its esports-minded peers in wanting to elevate competitive gaming. With the differences boiled down to design, connectivity, and pure display performance, how does Acer’s contender stack up?

If you’ve seen the Predator line before, then the XB252Q shouldn’t take you by surprise; the thin bezels, shade of matte black, large logo, and stand clearly hail from the same design house as its predecessors. Interestingly, Acer decided to forego the red accents this time, leaving a cleaner finish that’ll match do-it-yourself rigs better.

The “ZeroFrame” branding on the box means that it’ll play nice in a multi-monitor setup, with the top and side bezels measuring 7mm. There’s also full ergonomic flexibility with the height, tilt, swivel, and pivot adjustments thanks to its heavy stand, although the desktop footprint is considerably large due to those legs. Looking at it from the side, the monitor certainly appears chunky. If space is an issue then you might want to consider using a VESA mount, so long as it’s on an arm to get the correct TN viewing angle.

For connectivity, the Predator XB252Q includes a DisplayPort 1.2 and HDMI 1.4 for video, with a total of five USB 3.0 ports spread across the rear and left for peripherals and anything extra. You’ll also find a 3.5mm audio jack to bypass the monitor’s integrated 2W speakers — they’re decent for system notifications and set-up testing, but otherwise falls short for gaming or entertainment in general. 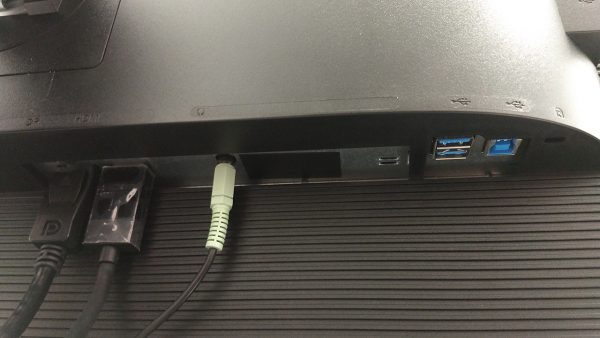 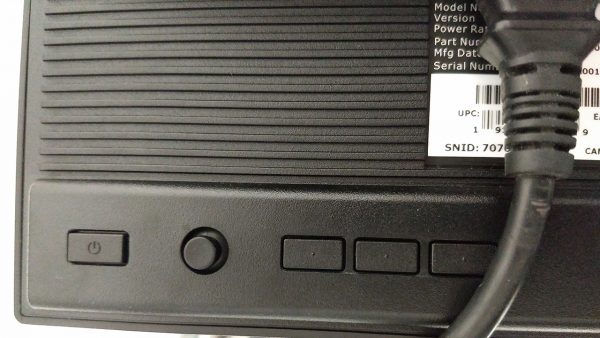 To access and control the OSD, four buttons and a joystick run horizontally along the back, just by the bottom-right edge. You’ll find the usual range of preset and calibration options here, including RGB color temperature, gamma scale, saturation, and Acer’s GameView for user-calibrated profiles. There’s an sRGB toggle as well but you shouldn’t take that to mean the monitor requires no tweaking.

The XB252Q works okay out of the box but really stands to improve after some adjustments to brightness and contrast, which are both a tad high. The latter occasionally washes out colors but can be reigned in to an acceptable degree — it doesn’t detract from gaming, and a Dark Boost feature helps matters when you’re playing horror or darkly-lit games. Acer have also implemented a Blue Light feature to cut down on fatigue.

As with modern G-Sync screens, the XB252Q brings Ultra Low Motion Blur (ULMB) to the table. While it only works up to 144Hz, it serves to keep the image ghost-free up to that ceiling. At lower frame rates, let G-Sync handle the work; when your games are hitting or approaching that native 240Hz mark, activate the overdrive setting instead, preferably at Normal so the algorithms don’t get overly enthusiastic.

Some other useful settings you’ll find are the hot key assignments, a power LED dimmer, and USB port power settings should you want to charge a device with it. You’ll also find a refresh rate counter that’s in obnoxiously large, yellow figures that honestly do more to distract than inform. It’s fairly limited in use, too, since most games and launchers already have options to display FPS counters.

With the weak contrast, one may begin to worry over the monitor’s color performance. Nobody’s going to do any in-depth color work on the XB252Q but, if you absolutely must, you’ll need to spend a little extra time calibrating to make full use of that sRGB coverage. The recent Windows 10 Creator’s Update introduced a Night Light mode that warms up the image past sunset, but even after checking I can’t help but feel that it isn’t completely neutral. Even so, for gaming and regular day-to-day use I have little complaints. 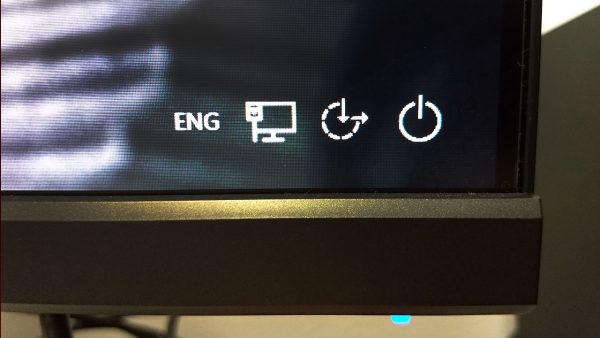 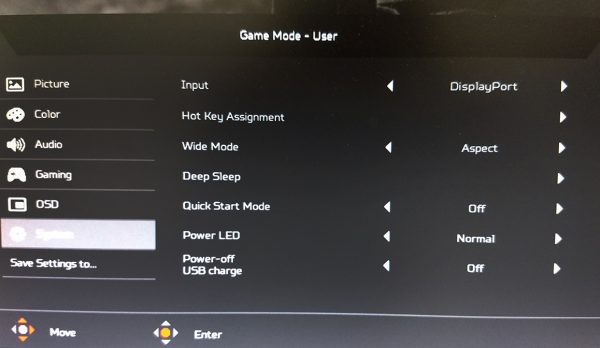 Poor contrast made up with decent color

That contrast on the Predator XB252Q does make movies and TV a little suspect, especially if you’ve seen monitors exhibiting far better performance in that area (and with HDR on the horizon to boot). It’s not that it’s unwatchable, just that scenes that play with light end up being far less impactful than they would have been. To use a common example, think of a face half shrouded in shadow — the facial lines and features, which may have been the slight hints of a sneer, wind up being indiscernible.

To be fair, this thing was built for esports, where visual elements are all clearly represented on screen. As a medium for all things fast and competitive, the XB252Q performs remarkably, displaying zero ghosting and trails when pulling off snap fire or quickly peeking around corners and the rear. Enemies moving past intermittent or gapped cover have sharper silhouettes, and I imagine eagle-eyed pros can easily identify the weapons in that split second.

While shooters tend to be the poster-child for blistering fast monitors, the high refresh rate lends itself well to MOBAs, racers, and fighting games too. Identification and timing are key among competitive titles, growing significantly more important as the skill level rises. When your monitor resolves nearly everything in a sharp image (unless it was an intentional developer choice), spotting those elements and nailing those moments become easier. Just remember that, like any tool, it isn’t the secret to overnight stardom.

Input lag was similarly absent as far as I could tell, the only slowdowns being a frame rate dip when the graphics card is struggles with certain, non-competitive games. The lack of virtual real estate or pixel density does leave a weaker first impression for the vast majority of titles, be it AAA or indie, but the buttery smooth performance provides a whole different sense of satisfaction.

Is it much better than 144Hz? Without being an esports pro, that’s hard to say. While the difference is there if you look at technical tests and strain yourself staring at the screen, it’s much harder to tell once the action gets going. A jump from 60 to 144 is certainly noticeable, but from there things take a much subtler turn. You’re definitely better off putting that money into some other upgrade if you already have a fast monitor.

A tough sell but one of the better options 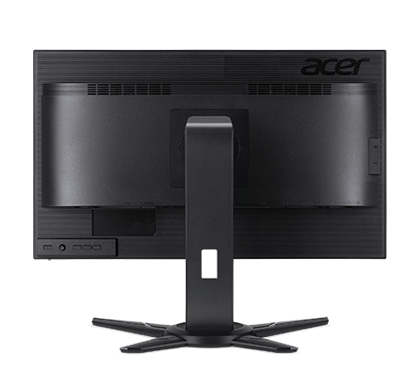 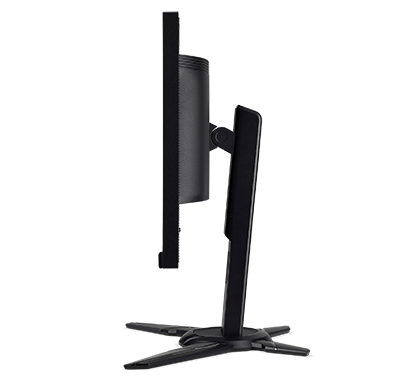 Splurging on the XB252Q for its refresh rate won’t leave you disappointed. In this regard, Acer’s monitor stands among the best in delivering cutting-edge gaming responsiveness. There’s certainly better value and versatility in going with a 1440p IPS option, but if you’ve invested heavily in a new system and mostly play action-heavy or esports titles, then you may want to give native 240Hz a shot.

Hovering at just above $700, Acer’s 240Hz offering beats the ASUS ROG and Alienware in terms of price point, putting it closer to alternatives from BenQ and ViewSonic. In terms of overall capability, however, this has certainly been one of the more impressive ones, making this a feasible choice for esports enthusiasts. The only question is whether the upgrade makes sense for you.

Ade thinks there's nothing quite like a good game and a snug headcrab. He grew up with HIDEO KOJIMA's Metal Gear Solid, lives for RPGs, and is waiting for light guns to make their comeback.
Previous post Super Robot Wars X coming to PS4 and PS Vita on 26 April 2018
Next post Ni no Kuni II: Revenant Kingdom pushed back to 23 March