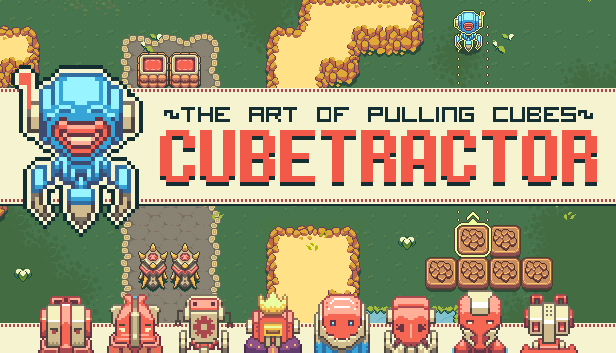 It’s been nearly a year since we’ve last taken a look at Cubetractor, that frantic puzzle game from Singaporean studio Ludochip. Just a beta version then, the game is now roaming the digital wilderness in a complete state. The question is: should you bring it home?

The mechanical heart behind Cubetractor has thankfully stayed the same, tossing players into a world filled with cubes, turrets and projectiles. It’s easy to consider this as an adaption of the tower defence formula – turret types and locations play a huge role in winning, after all – but there’s more to this neo-retro charmer than that.

For starters, there’s a reason why the developers describe the game with something as confusing as “action-strategy-puzzle hybrid”. To be brief, each level presents you with a set of enemies which can be destroyed via the various applications of Cubetracting – the fancy term for pulling cubes towards you. Why? To crush hapless drones! Build mighty towers! Rid the land of evil and score for exams! But you might want to do it fast because the enemies aren’t going to hang around waiting to die (unlike the AI in certain games).

To recap: build strategically placed towers at the right time by pulling cubes together to destroy the enemy while dodging bullets.

It sounds and looks dauntingly complex but Ludochip have managed to put together a satisfyingly challenging game that doesn’t wind up being too difficult. Besides, it’s the games with simple descriptions that end up being the hardest – just look at eSports.

Cubetractor also has an impressive presentation going for it. Retro aspirations are plenty in the indie community (and with good reason) so it’s a good thing that this comes packed with enough 2D style to have an identity. More importantly, despite all the on-screen chaos, I never found myself confused with where and what things were. As for the soundtrack, you’ll get to sample some of that sweet 16-bit goodness in the trailer down below.

The biggest surprise here is that a light-hearted story accompanies it all.  You may have noticed there’s only a single blue robot in that header, which predictably makes it the player character. What it doesn’t show is how special Endroi really is. Behind that simple demeanour of his is a gift for Cubetracting that has left most of – or quite possibly, all of – the red-coloured populace in shock and awe. It’s an amusing tale with an ending that might promise more.

And on that note, we come to the first point of contention: the game’s length.  Perhaps it’s just how the story ends but Cubetractor feels a little on the short side, with the “main exams” and some side quests clocking over four hours. Obviously that was just me powering through the game in one sitting but the 40 plus maps wouldn’t take long to finish.

This problem may have been circumvented if some form of multiplayer (as brought up in the beta review) or a map-making feature was implemented. Given the popularity of community-created content, Ludochip could have banked in on the simple principles that power Cubetractor, giving the game a longer lease of life and much-needed exposure.

Another issue still present in the retail version is the lack of a difficulty option, which may turn off the casual crowd. While the idea does go against their vision of building a title that “demanded dexterity and quick reflexes” like the console classics, an option for a more durable Endroi would be nice, especially when Cubetractor is great for the kids. An example in good game design, a family-friendly story and cast, no accidental in-app purchases – what’s not to like? It’s a shame then, that some younger players may just give up and forget about it.

Additionally, the keyboard controls aren’t rebindable for some reason. This didn’t prove a problem for me (WASD and Spacebar) but I understand that many players have their own preferences when it comes to such things. The fact this was left out on a PC game is, quite frankly, perplexing.

That said, Cubetractor was made by a two-man development team living off their savings. Considering the circumstances, I think we can excuse these shortcomings. Thanks to the Steam platform, the game will quietly receive any updates or fixes too – I’ve seen one fairly recently so the game isn’t completely forgotten.

So should you buy it? If you love challenges, puzzle games or want something fresh and exciting then absolutely! Even if you’re not interested I urge you to give the demo a shot. Admittedly the USD9.99 (SGD12.55) tag may be a hard sell for a one-off experience though it’s justified by having other indies debut around that price point. If you see it on discount then you really need to pick it up!

I think it’s a great game. The judges of 2012’s Independent Games Festival China think it was the best game (beating other finalists like Dustforce). And if nothing else, you’d get the warm, fuzzy feelings of having supported a talented Singaporean studio*.

(*Disclaimer: We cannot guarantee “warm, fuzzy feelings” for it is anathema to Bad Robots.)

Cubetractor (PC)
THE VERDICT: BUY IT

Cubetractor is developed by Ludochip for PC and Mac. Get the game or the demo on Steam.

Ade thinks there's nothing quite like a good game and a snug headcrab. He grew up with HIDEO KOJIMA's Metal Gear Solid, lives for RPGs, and is waiting for light guns to make their comeback.
Previous post Glorious Sights And Victorious Titans: RGB's E3 2013 Roundup
Next post Chaos Online Gets Its First Tournament, Registrations Now Open