Review — The Razer Kraken: Tournament Edition is way more than meets the eye 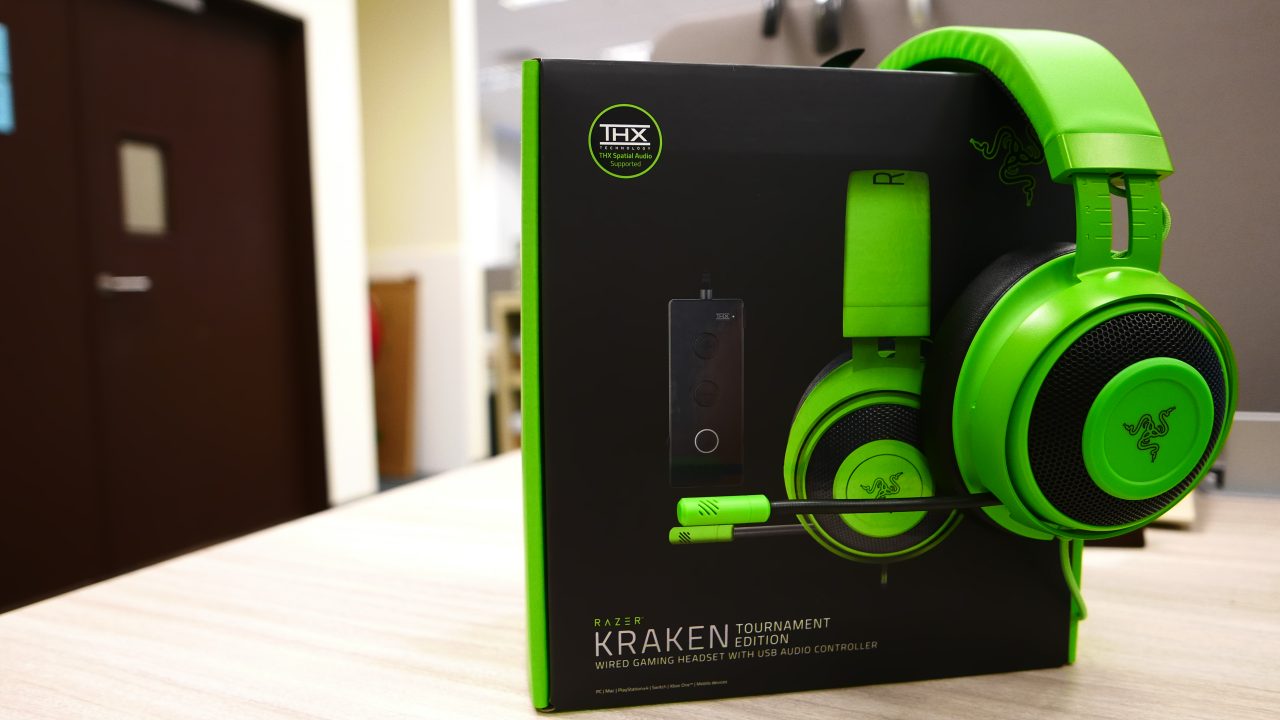 Although the Kraken does deliver on the above promises, it also suffers from issues atypical to Razer products. We’ll get into that as we go along but, for now, let’s see what the Kraken has to offer.

Sporting a tough, lightweight aluminium frame, 54mm x 65mm diameter ear cups, as well as Razer’s signature green and black colour-coding, the first thing that jumps out at you is definitely the size of the headset. The Kraken is arguably a lot larger than most other headphones, such as the HyperX Cloud Flight. Fortunately, it isn’t as heavy as it looks, weighing in at only 322 grams. The cable is also surprisingly easy to manage as it comes with an adjustable rubber strap, similar to those on watches, so you don’t over-compress the wound-up bundle.

Like most headphones, the Kraken comes with a padded headband and cooling-gel infused ear cushions, making it ideal for extended use. Personally, I felt that the Kraken’s cushions didn’t press too hard on my ears, which is a common problem I’ve had with other headphones. It’s great not having aching ears after a gaming session.

Last but not least, the Kraken has an in-built extendable mic housed within the left ear cup, which can be pushed in or pulled out as required. It’s one of the better designs for a mic that I’ve seen, and it doesn’t get in the way when you’re using the Kraken for everyday purposes. 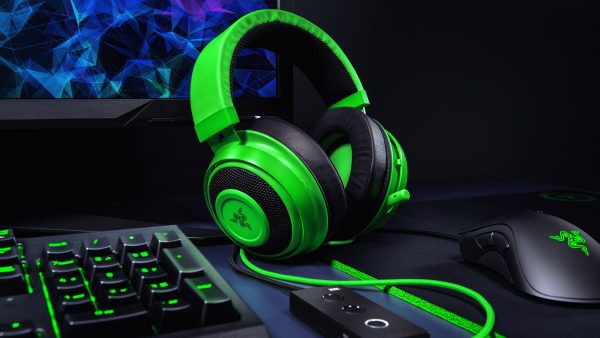 As usual, our testing involved a variety of different media, but since it’s a Razer headset I went with the gaming sessions first.

This is my go-to for positional feedback tests, but I was especially stringent with the Kraken given how much Razer touted the inclusion of THX Spatial Audio. Fortunately, this headset wasn’t all bark and no bite. Out of the 10-odd matches I played on Dead by Daylight, I’ve lost count of how many times I managed to evade the Killer after his footsteps gave him away.

It’s true that a lot of headphones do well in this regard but I think the Kraken did just a little better, in the sense that the echoes it provided felt more specific and pronounced. This in turn led to more “tactical” decisions, so to speak.

On a more amusing note, I often got confused between real-life footsteps and in-game ones while I was using the Kraken. In fact, the biggest shock that night came from my dad putting his hand on my shoulder rather than the Killer!

Many games have amazing music, but as far as soothing soundtracks go Minecraft is one of my favourites. Consider it a curveball of sorts for the Kraken, since composer C418’s peaceful, entrancing numbers like “Wet Hands” and “Mice on Venus” are opposites of the adrenaline-pumping themes that accompany most games nowadays.

On that note, I found that the Kraken does add a unique depth to music that people might usually miss out on. This is more of a personal opinion, but I feel that the THX Spatial Audio function really pays dividends in scenarios that are all about environment, and it doesn’t have to be just games.

Although the primary focus here was the soundtrack, Minecraft also served as a secondary test for positional feedback alongside Dead by Daylight, since the game is notorious for having a certain hissing mob popping up behind you at the most inconvenient of times.

The third game used for testing was Overwatch. At the top of the checklist were the usual stuff: projectile sounds, voice lines, and various other sound effects included in FPS games. After all, there’s no point buying a set of high-end headphones if it can’t even handle popular, run-of-the-mill games in the first place.

Overwatch is fundamentally a team-based game, which means players have a better chance of winning if they can communicate effectively. Out of the numerous features that the Kraken has, I felt what really shone here was the game/chat balance toggle, controlled via the dongle. It essentially manages the audio balance between in-game sounds and voice chat, facilitating communication with teammates while not compromising on immersion.

Also, it’s common to see players mistime skills and pushes because of game noises obscuring their teammates’ voices. This game/chat balance helps to alleviate that problem, and I found myself winning a larger percentage of games during the test session than I did with my regular headset, owing to the significantly improved clarity. On that note, I remember thinking that this might suit gamers who play a lot of battle royale or FPS games. 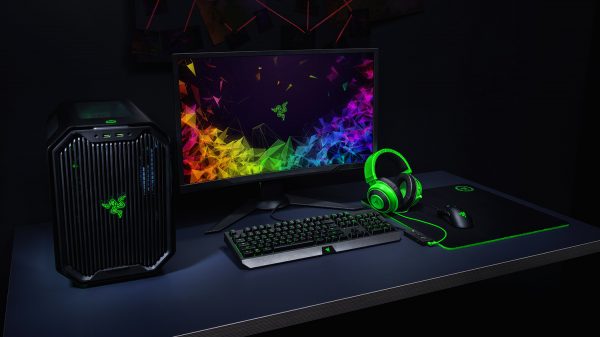 Moving on to the next aspect of our testing: music. Strangely, for a headset that supposedly works best in games, I felt this was where the Kraken stood out most. Although I was listening to the usual playlist I use in the office, I found myself noticing small beats and nuances that I’d never really noticed were there. Initially, I thought this was just a fluke.

Suffice to say that I was never so happy to be wrong. Not only did the Kraken register the previously unheard portions, but it also breathed a certain depth to the music like it did with Minecraft.

The Kraken’s bass control on the dongle was also rather fun to experiment with, adding a lot more oomph to OneRepublic’s “Counting Stars” while mellowing the tune of Fate: Grand Order opening “Heretics”. As it says on the box, there are 17 different bass levels to choose from, so there should be something for everyone. Between the already-solid quality of the set and the bass versatility offered by the dongle, I can definitely say that this is another area where the Kraken one-ups its rivals.

Where the Kraken doesn’t shine

Interestingly (or impressively), the Kraken’s main flaw isn’t exactly detrimental per se. It’s more of a holistic than a technical issue: are some of its features worth paying for?

We all know that the Kraken already has a volume knob located on the headphone cable, but someone decided to toss in a USB dongle with its own set of volume controls to further enhance the audio experience. Sure, why not? The more options the better, right? 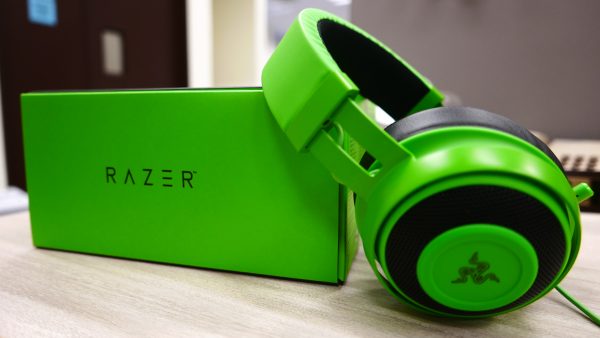 Not necessarily. There’s no point in using something that’s impractical in situations where it’s supposed to be relevant. For example, let’s say you had the Kraken and the USB dongle hooked up to your computer. You’re playing a slow, methodical card game like Blizzard’s Hearthstone or Valve’s Artifact, and you suddenly would like to turn down the volume. So, while waiting for your opponent’s turn you reach for the controller and do so. Easy.

But, what if it was a fast-paced game like Black Ops 4, Overwatch, or any battle royale instead? You might not have the luxury of time to take your eyes off the screen even for a moment — for all you know, it could cost you the match. The bottom line here is that although the Kraken’s features do bring impressive enhancements, they can be situationally irrelevant, which then affects how “value-for-money” potential buyers might perceive it to be. I mean, would you be willing to pay for something that might not be useful to you?

The Kraken’s other flaw is also a point that I’ve mentioned at the start: it’s immense bulk. With an inner ear cup measurement of 54mm x 65mm it dwarfs almost every other headset that I’ve seen. 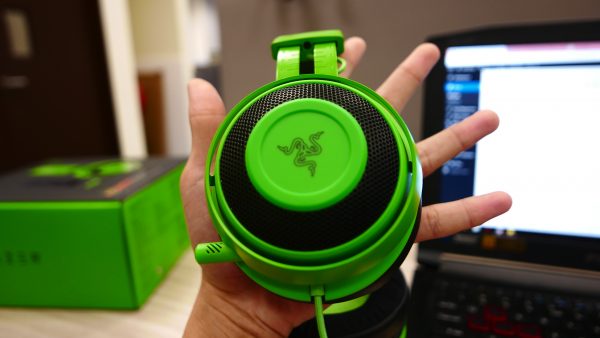 And that’s just one ear cup.

Additionally, it lacks the folding capability of some of its rivals, which isn’t doing it any favours. Therefore, it’s best used at a fixed setup where you don’t need to carry it around all the time. If you can look past that, then the Kraken can definitely fill the role of an everyday headphone.

Despite its faults, I think the Razer Kraken: Tournament Edition is a lot like it’s namesake: you don’t see most of it until you take a look beneath the surface. Music lovers and gamers alike will probably appreciate it, both in terms of performance and price. Granted, its features may sometimes go a little off-point, even then they’re not detrimental at all. With that said, I think it’s quite a good catch on the whole, and is an option you might want to keep your eye on the next time you go shopping for a gaming headset.

The Razer Kraken: Tournament Edition is available now at S$159.90.
A unit was provided for review.

Kenneth is your dedicated jack of all trades gamer and borderline anime nut. When not writing, he likes to wind down with Overwatch, Apex Legends and a bit of Fate: Grand Order on the side.
Previous post GAX Deal Alert: 12.12 Edition
Next post Black Ops 4’s new Dead of the Night zombies map has fangs, claws and a star-studded cast