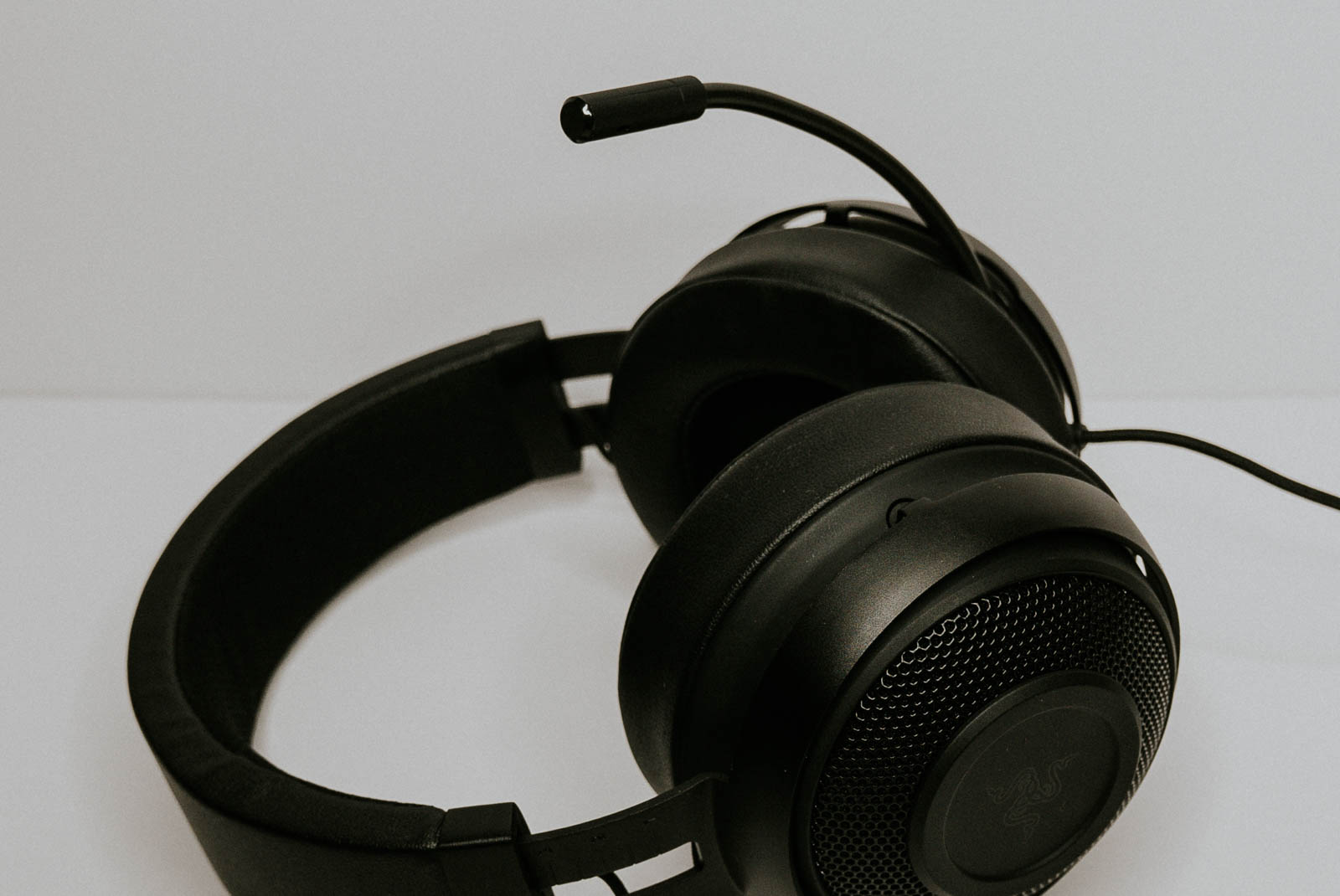 I own the original Razer Kraken Pro headset, and while I always loved its look, I stopped wearing it because it gave me headaches from the high clamp force. I assumed that it was to compensate for its overall weight and stop it from sagging down my face, but I felt pressure on the crown of my head and in my temples  all the time.

V2 is much better in that aspect. Noticeably lighter, with fatter, wider cushions, it fits according to the planes of your face, rather than just applying the tension to force a fit, which is a vast improvement. I’ve worn them out in public and it crowds your neck a little bit when you’re not wearing them over your ears, but unless you’ve got an oily face (which, combined with friction and time might cause the leatherette to flake), you don’t really have to worry too much about how it looks. Don’t make eye contact with anyone. You’ll be fine.

They’ve provided a round ear cushion shape that you can change to if you want to make it an on-ear headset, but I prefer these ovals for a more relaxed seal over my ears. The sound isolation won’t completely eliminate the typing on your mechanical keyboard (unless the volume is turned way up), but it’s enough to block out the voice of the person who comes into your room to talk at you while you’re in session.

Where the previous edition of the Kraken Pro suffered from a serious case of muffling, the tuning here is far more balanced – it feels like someone has lifted the cover off the box I was previously trapped in, and things are much clearer. I like slightly crisper mids and pluckier bass rather than an overwhelming thunder of lows, and this meets that preference very adequately.

I’m not going to comment on directional capabilities (because at this stage of tech, that is a requirement for a standard gaming headset, not a unique selling point), but what I’ll say is that the Kraken Pro brings game music further to the front of the experience, in addition to preventing voices/dialogue from being swallowed up by the rumble of environmental action. You’ll like this if you’re playing games that rely a lot on noise to build a world or create suspense, like F.E.A.R., or Borderlands, where you can enjoy the clatter of cans you kick over or the crispy clicks of your weapon reloading. Maybe not so much if your aim is to feel the vibration rattle your brain until it runs out of your nose.

For once, there’s an inline mic left in this world that doesn’t cause audio distortion when you adjust it. The dial offers a nice resistance that doesn’t blow your ears out if your sleeve accidentally rubs up against it. It’s also pretty fun to draw the mic from its chamber. The stem is delightfully malleable and doesn’t flex back into place, and it sounds clear, though a bit on the soft side.

Would it help you competitively? For sound, maybe, because small little audio details are easier to notice. For comfort, yes, because its weight is well-distributed and these cushions are damn cushy. On the packaging it claims it will go the distance and I believe it. For voice, it’s hard to say, because Razer’s mics do what they’re supposed to, but it’s not something revolutionary. So it comes down to bass power – of which this has less than their usual fare. But it’s not a bad thing.

If you want something no-nonsense and straightforward, the Razer Kraken Pro V2 will do a fine job of giving you everything you need for an immersive time.