Home / Breaking News / Preview: The Division 2 shows that plenty has changed since The Dollar Flu

Preview: The Division 2 shows that plenty has changed since The Dollar Flu 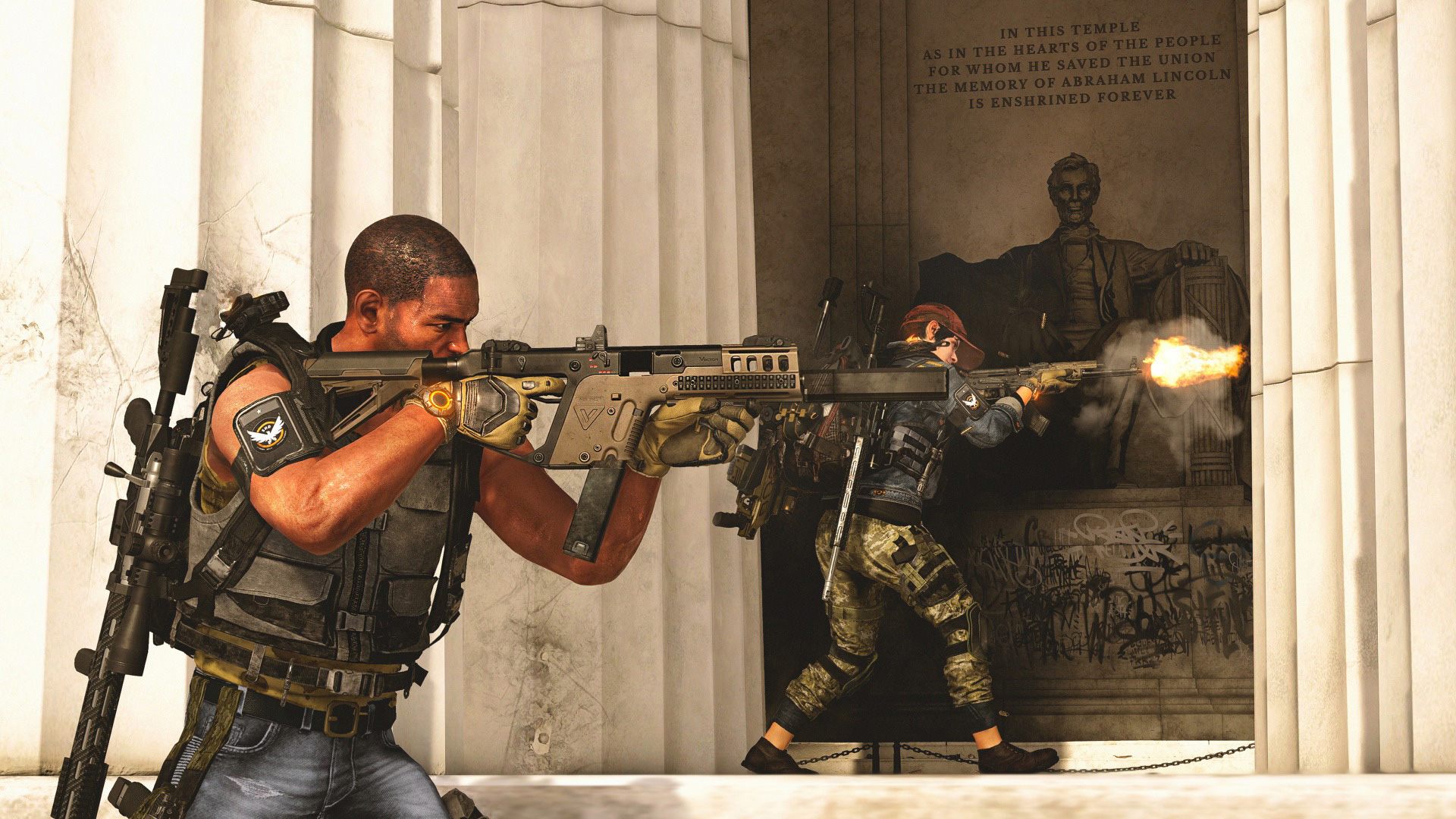 Every gaming franchise has an inherently unique “feel” about it, and Tom Clancy’s The Division 2 is no exception. Trudging through the recreated streets of Washington DC, I settled into a cover-shoot-loot cycle that felt warmly familiar. The environment has changed, the components have shifted, the gadgets updated; but at its heart this was The Division through and through. For all the faults the first game had (which genuinely improved over time), this was a themed attraction I dearly missed.

It’s been nearly three years since we fought our way through a beleaguered New York City, plucking through contaminated malls and apartments in the wake of a chemical weapon attack. In-game, it’s only been seven months. Now, sleeper agents of the Strategic Homeland Division are tasked with retaking the capital, held by a conglomeration of factions led by one rogue Joint Task Force colonel. 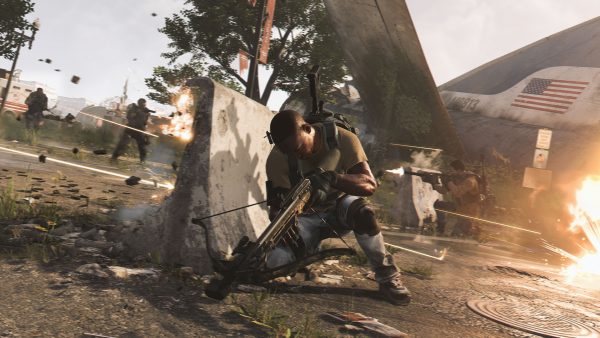 There are similarities. I spent those opening hours setting up a base of operations, recruiting skilled personnel, and progressively widening my net of exploration. Where it was once the James Farley building in Manhattan, it’s now the White House in DC. Where there were multiple wings and their respective heads, we now have one quartermaster plus several perk-granting staff across the map. That base routine, along with finding SHD caches and audio logs, crafting gear, and gunning down roaming enemies, have not changed.

So, what has? We’ll start with movement. Developers Massive Entertainment have tweaked the way your agents control, and I had to boot up the old Division to make sure. The characters now have weight to them and aren’t as agile as before (which makes sense given all that kit they’re carrying), a change I quite enjoyed for now – I might sing a different tune after putting in 20 to 30 hours. Yet the aggressively sticky cover definitely rubs me the wrong way, as there were plenty of moments where I drifted into a wall or behind a car despite wanting to run past it.

Likewise, they’ve slowed skill activation times, so you can’t just push a button and expect a grenade or seeker mine to follow milliseconds after. On the other hand, they’ve sped up the time-to-kill for NPCs and players, forcing me to rely on the new armor system, as well as hard cover, to soak up most of the damage. Without either of those, death comes swiftly. Put together, this means I can’t sprint, roll, and pop an instant heal to get out of tricky situations – a strategy that worked before.

It’s clear that the devs are nudging Division 2 closer to realism, yet not so much that it gets within arm’s reach of military simulators. After all, this is still an RPG with tiered equipment and statistics. Maybe I can just steamroll my way through oncoming fire with end-game gear; maybe later bosses will turn into greater bullet-eating sponges; and who knows what else might change once the player meta evolves and a stream of patches rewrite things. Yet there’s more to Massive’s list of revisions, including enemies who are far more active in combat.

The True Sons faction, being former JTF, are a highly coordinated group that will eagerly flank your position or flush you out, employing gadgets and specialists such as medics with defibrillators or heavily-armored juggernauts. I ran into them early on, finding that I had to check my sides and the environment more often to keep them at bay. Then there are the Hyenas, who by comparison are a loose bunch that curiously reminds me of PUBG players; you’ll find them assaulting the White House and living up to their namesake elsewhere.

Related to that are the new level designs afforded by Washington DC, replacing Manhattan’s long corridors of skyscrapers with wider, more open terrain. There still are linear segments such as sewers, building interiors, and districts like the Navy Plaza, but so far I’m seeing greater variety in The Division 2. There are more opportunities for you to be caught unaware, balanced by the high amount of cover littered all around. Road dividers, abandoned vehicles, and so much more help paint a convincing image of first-world urban warfare, and it all looks stunning on the PS4. 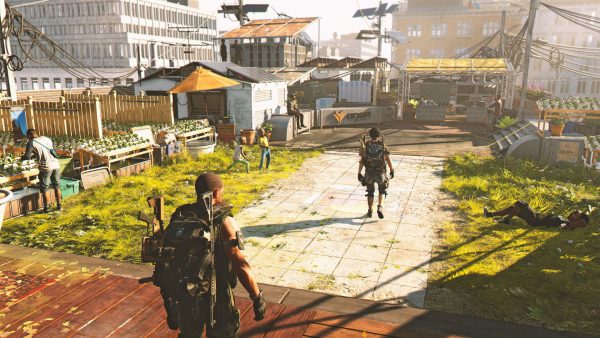 That first-world setting has always been one of The Division’s strengths, especially when not many games dare to reduce the real-life cities they adapt into dirty warzones. The transition to Washington DC has kept that morbid awe and wonder, though what The Division 2 gained in color, it lost in atmosphere. There was an air of desperate survival in Manhattan, in a city cut from supplies and blanketed in snow. Civilians randomly walked up to you on the street, trading their clothes for water (even if that’s all they ever really did). Replacing that moodiness is an experience that, in some ways, feels like Far Cry.

There are civilian settlements for you to find and support with supplies and tasks, a reimagining of the safe houses of old. You can even call in the militia, aiding your fight against the hostile factions, taking over enemy control points. The two games feel like different sides of the homeland security coin, and The Division 2 helpfully points out your role in the beginning, right as you meet SHD coordinator Manny Ortega in the White House: that you’re the new (mute) sheriff, and you’re here to bring law and order back to DC.

Save for the Dark Zones, that is. I didn’t get to spend enough time in there, having seen only one tough Invasion by the Black Tusks and no more than two hours of PVP with a random group. It’s immediately apparent that the changes Massive have made were with an “end-game first mentality,” as player behavior largely seemed different than before (for reference, I stopped playing the first Division after they introduced global events). Gear normalization, slower movement, and slower skills made people cautious, more measured in their offensive pushes, and players who tried to hoof it out in the open found themselves hitting the floor soon after. 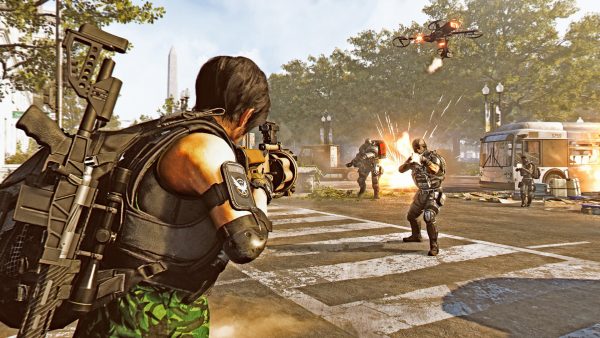 As excited as I am to comb through Washington DC and see where the story takes us, online looter-shooters heavily rely on player retention. That means end-game content, which for The Division 2 means Dark Zone content and, ultimately, raids. There’s going to be an open beta from 1-4 March, something I’ll use to poke around in the Dark Zone more, though the real test will be in the weeks following its launch on 15 March.

Tom Clancy’s The Division 2 will be on PC, PlayStation 4, and Xbox One.

Ade thinks there's nothing quite like a good game and a snug headcrab. He grew up with HIDEO KOJIMA's Metal Gear Solid, lives for RPGs, and is waiting for light guns to make their comeback.
Previous post Mint 1985 copy of Super Mario Bros. auctioned for more than US$100,000
Next post Skull & Bones is getting a TV show