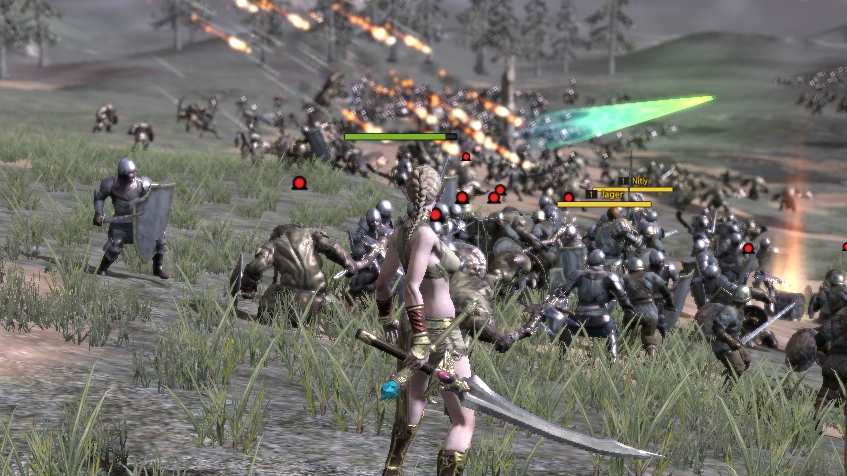 Zooming in on the battlefield to fight alongside troops has been one of my oldest gaming dreams yet none, in my experience, has managed to come as close as Kingdom Under Fire II. Marrying gratifying hack-and-slash combat with light tactical judgments makes for an unforgettable experience, as each mouse click translates into doom for a dozen enemy grunts. It’s just a shame that moments like those are broken up by stale quest design that are anything but memorable.

The following are my impressions after a two-night stint with the game’s Experience Beta Test, going no further than Level 19. Perhaps some of its problems get edged out with high-level content, something we’ll only find out post-release. For now, here’s the first seven hours.

Get past the clunky log-in screens and you’ll be greeted with the three playable characters, beautifully detailed. Kingdom Under Fire II brings a level of graphical fidelity I wouldn’t normally expect in a free-to-play MMO, and Blueside’s attention to visuals happily extend into the game’s environments as well. Certainly impressive with the scale they have in mind.

The game’s world is best described as high fantasy with Asian influences. That much is evident while meddling with the character creator, which is fairly in-depth with all manner of sliders. While a lack of armor variety makes everyone look related from afar, up close the facial details come into play. Unfortunately, KUF II suffers from stereotypically ridiculous armor design for women. It’s even more puzzling once I found out that my character wasn’t even a complete magic user, having to somersault into the fray with her electrically-charged sword. I doubt skin and cloth alone make for adequate protection against rusty Orc blades.

Other than that misstep, Bluside have done a good job in making everything look good. Helpful in attracting attention, but at the end of the day, nothing more than a bonus to the real meat of the game: combat.

At a glance, Kingdom Under Fire II brings up memories of Koei’s Dynasty Warriors franchise. Playing as a hero general, charging into frontline combat and effortlessly cutting down swathes of foes; sometimes we’d even have accompanying troops at our command. The comparison isn’t really far off, though there are appreciable differences.

Foremost of them all is the greater troop control. While there are options to swap orders between Attack, Defend or Follow in the midst of fighting, players can zoom out to an overhead view to give commands. Tactics here can be as simple as sending a group of soldiers to reinforce an ally’s position, or as complex as setting up an ambush with your archers.

You don’t necessarily have to make use of this feature but the game is so much lesser without it. Besides, it doesn’t require as much finesse as regular strategy games. Given time, troops can be upgraded to fire crossbows or toss fireballs instead. If ranged isn’t your speed then try out cavalry and spearmen. As the number of troops you command is loosely tied to your level, you’ll never feel overwhelmed trying to manage them all.

The second biggest difference shouldn’t be surprising: customization. Troops have three slots each for upgrades, bolstering whatever statistic you find important. Your hero, on the other hand, gets a full complement of gear, as well as skill points to sink in proficiencies and abilities. Typical RPG design, no doubt, though it does help you feel attached to your forces.

And as with all RPGs, there is a greater calling your hero must answer. While I’m not going to dwell on the story for the purposes of this preview (the English translations have room to improve), I do need to talk about how the game progresses.

Grinding to a halt

Every encounter peppered with Ogres and monstrous Scorpions is prefaced by smaller combat zones, taking your force through towns and forests. These can be considered the action-oriented “dungeons”, warming up the player for an epic battle, and are for the most part fine. Nothing too inspirational in terms of level or enemy design but it gets the job done. Your airship and the world map will be the primary means of travelling between regions and dungeons.

Closer to the capital you will run into larger areas populated with players and quest-givers – similar to regular MMORPG. Now these sections are when KUF II completely grinds to a halt in terms of momentum. I can see how they wanted players to get acquainted with the “situation on the ground” so to speak, as quests here are doled out by guards and civilians. Regrettably, the quality of the quests themselves is sub-par.

Here is where you’ll be forced to Find X, Kill Ten Y and Collect Five Z. It’s unbearable after the deluge of MMORPGs we’ve seen in the past decade and, in our case, a huge contrast to the in-game massacre we just left in our wake ten minutes ago. There’s no group questing like in Guild Wars 2 either, so if someone else hit that target enemy first you’re going to have to wait.

Rather than an elegant blend of both action- and MMORPG, we’re given an awkward toss-up between the two. I know it’s much harder said than done, given the entrenched concept of what the latter is, but this seemed like a good opportunity as any to try something new.

Upsetting as it is, I’m still looking forward to playing Kingdom Under Fire II at release. The enthusiasm has certainly died down but the combat is just way too satisfying to pass up. There’s also the prospect of seeing my troops and Spellsword at higher levels, or how the larger dungeons would turn out. I’ll bill the game as an occasional indulgence, when the need to absolutely ruin the plans of an entire Orc invasion ever crops up.

Kingdom Under Fire II will be available on Windows PC and, eventually, the PlayStation 4.

Ade thinks there's nothing quite like a good game and a snug headcrab. He grew up with HIDEO KOJIMA's Metal Gear Solid, lives for RPGs, and is waiting for light guns to make their comeback.
Previous post Final Fantasy VI now on iOS
Next post Flappy Bird Taken Off App Store and Google Play