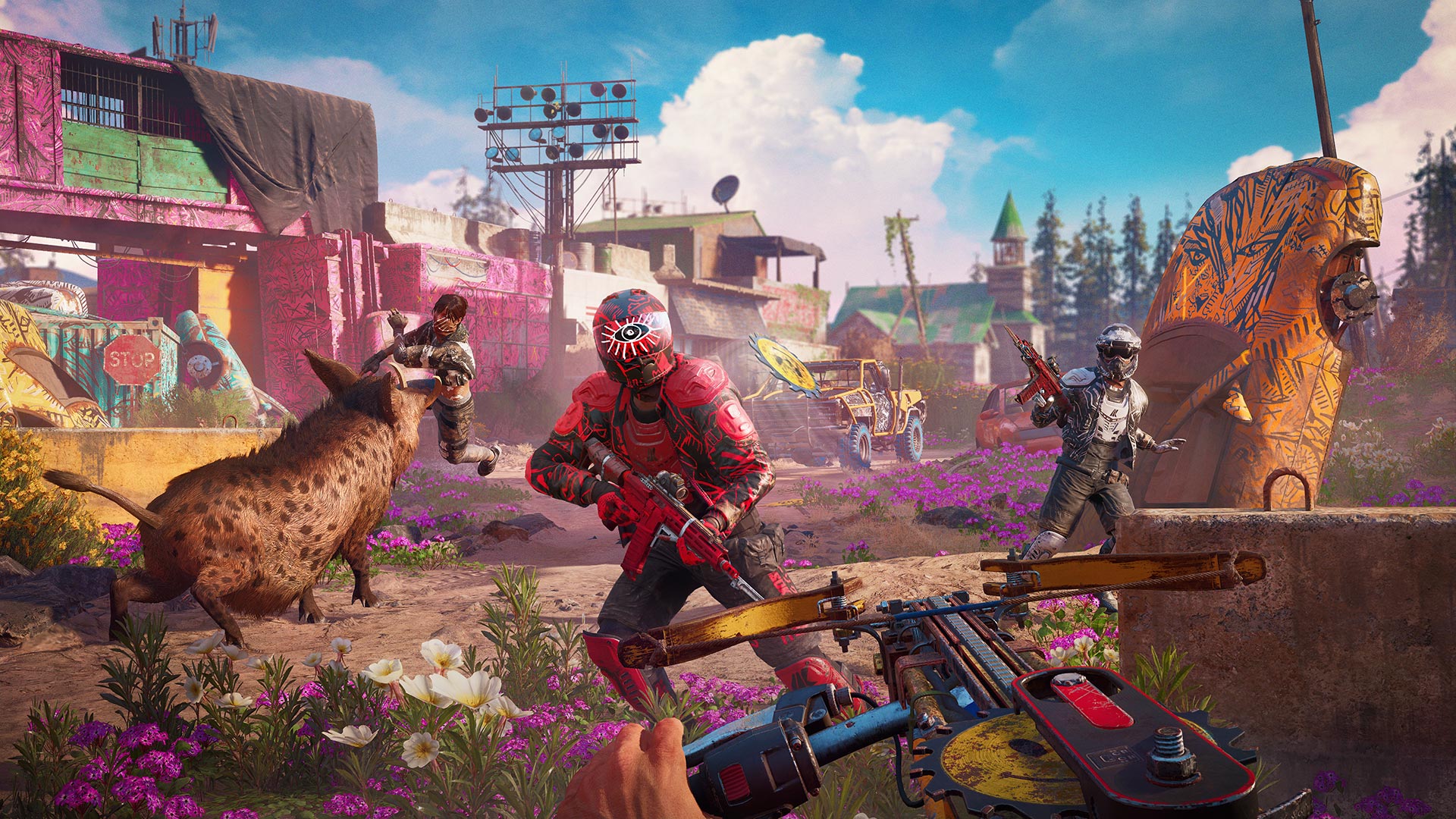 The island seemed familiar. My Ubisoft handler suggested I check out the spot before our hands-on session wrapped up, and with 30 minutes left on the clock I figured why not. I had just acquired the Saw Launcher and probably had enough ammo for whatever awaited me, so I sped over from the train yard, ditched my ride underwater, and swam over to the waypoint. I expected the Twins. I expected some funny Easter egg. What I did not expect was to see Father Joseph Seed. 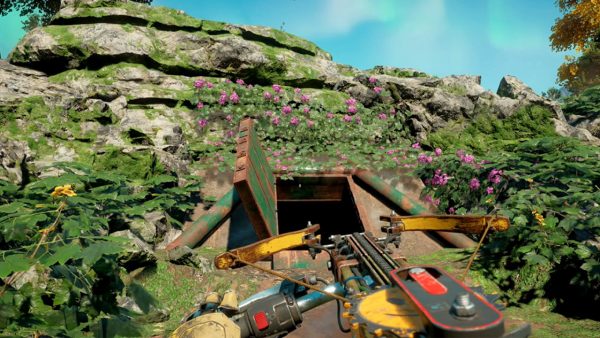 Far Cry New Dawn takes place after Far Cry 5, assuming you’ve seen a certain ending. Seventeen years after the nuclear bombs fell, Hope County resurges to life under the auspices of a super bloom, painting a very different picture of the post-apocalypse. The landscape is bursting with greenery and the occasional wildlife, the roads still seem fine, and in all honesty, it looks distinctly Far Cry.

That’s disappointing for a standalone release. Far Cry Blood Dragon was an immensely fun and creative follow-up to FC3, putting such a spin on the formula that it got players outside of the fanbase curious and talking about it. Given the returning characters and larger context of New Dawn, I’m wondering why this simply wasn’t an expansion instead.

Regardless, I was here to give the demo a fair shake. Players now fill the shoes of one Security Captain, part of a roving band of experts who, under the leadership of Thomas Rush, help to rebuild communities across the United States. Things weren’t always going to stay peachy, of course. Prior to the demo, the party is ambushed by the Twins’ Highwaymen, a large gang of scavengers who basically undo everything Rush and his team seek to accomplish. The Captain manages to escape; Rush doesn’t. 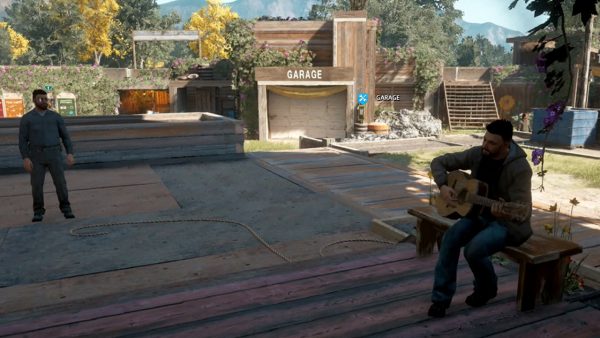 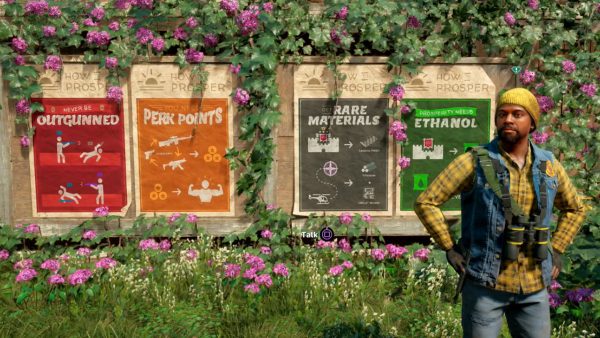 I gained control of the Captain back at Prosperity, a warm and rustic showroom of the past. The spacious interiors are gorgeously furnished, a central fireplace is crackling away, and out on the porch is a guitarist lulling me into a false sense of security. It’s the log-fencing that betrays the danger beyond this walled settlement, and the large signs saying ‘Training Camp’ and ‘Garage’ that reveals the progressive grind ahead. Armed with a map and to-do list, off I went into Hope County 2.0.

To describe the moment-to-moment gameplay of Far Cry New Dawn would be to describe Far Cry 5 in general. Vehicles occasionally ply the roads further out from Prosperity, where Highwaymen cart all sorts of goods for you to liberate – oil, slaves, all numbers to the RPG backbone of the games. Soon enough, I ran into the first real gameplay highlight of the demo, up on a hill where an abandoned facility stood.

I entered after a brief firefight with pursuing Highwaymen, outgunning snipers with my handgun. I only planned for a quick perimeter scan before resuming my journey, but then I noticed that the place was called Meatfort. Further in were these rowed stacks of cages. Consider me intrigued. With my gun-for-hire Carmina Rye in tow – yes, the daughter of a certain Far Cry 5 pilot, and yes, this really should be an expansion – we gingerly stepped into this creepy outpost. 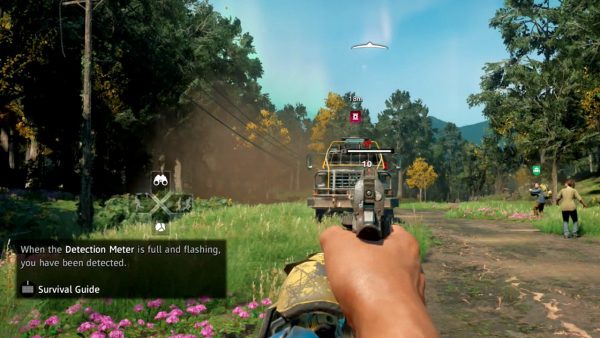 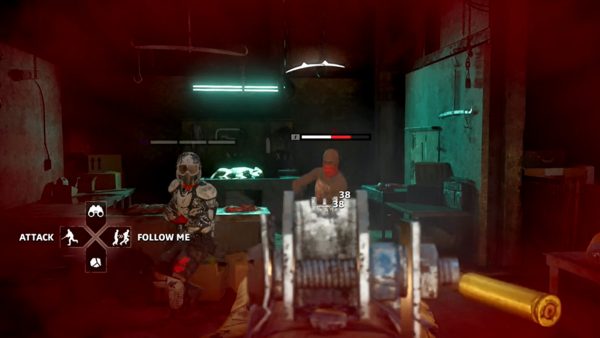 After waylaying the resident baddies, one of whom was a bullet-soaking elite, I horrifyingly learn what gave the place its name: captive dogs with less-than-happy fates. A few notes lying about spell out some recent events, but there was still a glimmer of hope. The mission tracker already spoiled things by asking me to find a dog, and after following the whines and yelps, I found a lonely, scared doggo eager for a pet (hold square to pet).

This set off a brief platforming puzzle that had me retrieving a key and freeing the retriever’s buddies, except the demo bugged out so I essentially spent minutes monkeying around to open an empty cage. Or maybe I let out a few ghosts, who knows? Either way, it was no chip off my shoulder since I now had the steadfast loyalty of Timber, my first fang-for-hire.

As feel-good as that whole jaunt was, this was yet another carry-over from FC5. Thinking about it, Cheeseburger the diabetic grizzly bear had a more entertaining setup, and I struggle to see why we couldn’t have something even stranger from a post-apocalyptic Far Cry; realism should take a back seat to the possibility of a three-headed companion dog. At least Timber can sit in vehicles, and he looked absolutely precious riding in a sidecar. Looking through his abilities, it seems that he can sniff up crafting materials too, essential to the new base upgrade mechanic in Far Cry New Dawn. 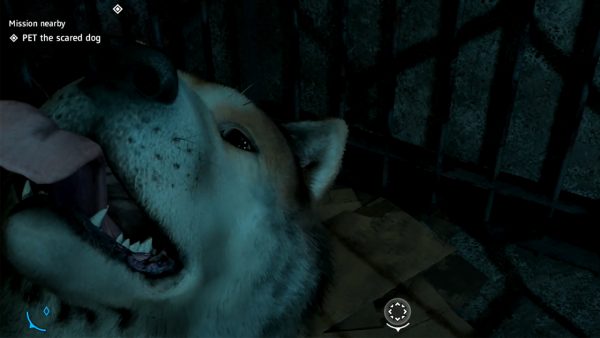 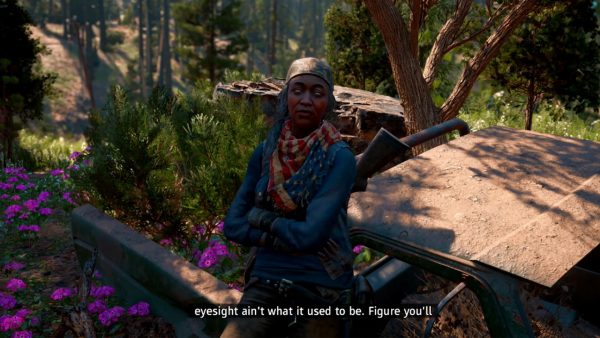 The next highlight, as you might surmise, came from acquiring the Saw Launcher. It’s one of the first unique weapons you’ll find in the game and it does live up to expectations, firing a ricocheting saw of death that automagically finds its next target. The gun is an absolute champ at clearing clusters of weaker goons, ripping things up like the black market cousin of Beyblade.

The sponsor for this new toy is none other than Grace Armstrong, a surviving veteran of Far Cry 5. Much has changed in the years since, most notably her eyes – the sharpshooter may shoot no more, but she does have a mean engineering streak. Of course, nothing comes for free in a quest-riddled game, and so you must recover the weapon in an old train yard that doubles as a ripe training ground for both the Saw Launcher and larger enemy encounters in general.

The Highwaymen weren’t much of a pushover this time, coming out in force and with their signature flamethrowers. They even let loose a couple of attack dogs too, although Timber had no qualms reaching for their throats. The Saw Launcher, environmental design, and liquid fire made for some tactically interesting combat, but I’m thankful the whole encounter didn’t overstay its welcome. Did giant mutant worms sprout out of the ground, or did the Highwaymen use cobbled-together weapons never seen before? Nope. I was beginning to wonder if the whole nuclear thing was even a necessary story beat at this point. 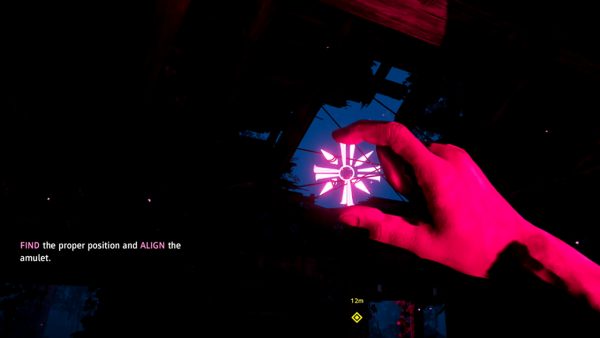 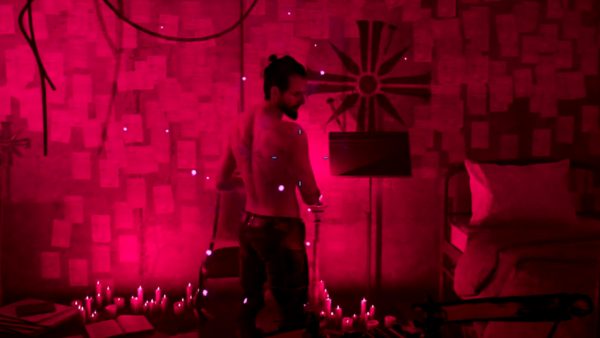 Of course, that changed on the island. Joseph’s island. For returning Far Cry 5 players, this is indeed the place where our dear Father took shelter as fiery mushrooms blossomed across the lake. But we don’t get there immediately, no. I first had to trek around the place, outright hallucinating as Seed monologued his way into the player character’s head. It was only after the phantom finished his sermon did I find myself in his bunker, surrounded by notes as he patiently awaited for his day to come.

If you’ve kept up to date with news and updates then you know that Father Joseph is in the game, but he’s less of a concern this time around. His goal has been accomplished, and he probably wants to rid New Eden of the Highwaymen interlopers too.

As exciting as that moment was, I again had to question why Ubisoft went with the whole standalone approach – it’s akin to readers jumping ahead to the next book, and I feel that much of the story would lose its impact. So then why would newer players care? The gameplay additions and tweaks don’t quite warrant a standalone release in my eyes, either, so I’m at a loss over who would pick up Far Cry New Dawn at full price on release.

Perhaps the full game would shed some light on these decisions, that maybe Ubisoft have been saving New Dawn’s best moments for a surprise. Besides, the Far Cry games have been pretty good at giving us colourful villains since the charismatic Vaas hit the scene, so maybe the Twins might inject some life into the experience. For now, it all feels very… business as usual, and I can’t help but think that the series might need a break like Assassin’s Creed did.

Ade thinks there's nothing quite like a good game and a snug headcrab. He grew up with HIDEO KOJIMA's Metal Gear Solid, lives for RPGs, and is waiting for light guns to make their comeback.
Previous post Anthem will be getting a movie prequel!
Next post Assassin’s Creed III Remastered releases on 29 March, will include DLCs and Liberation