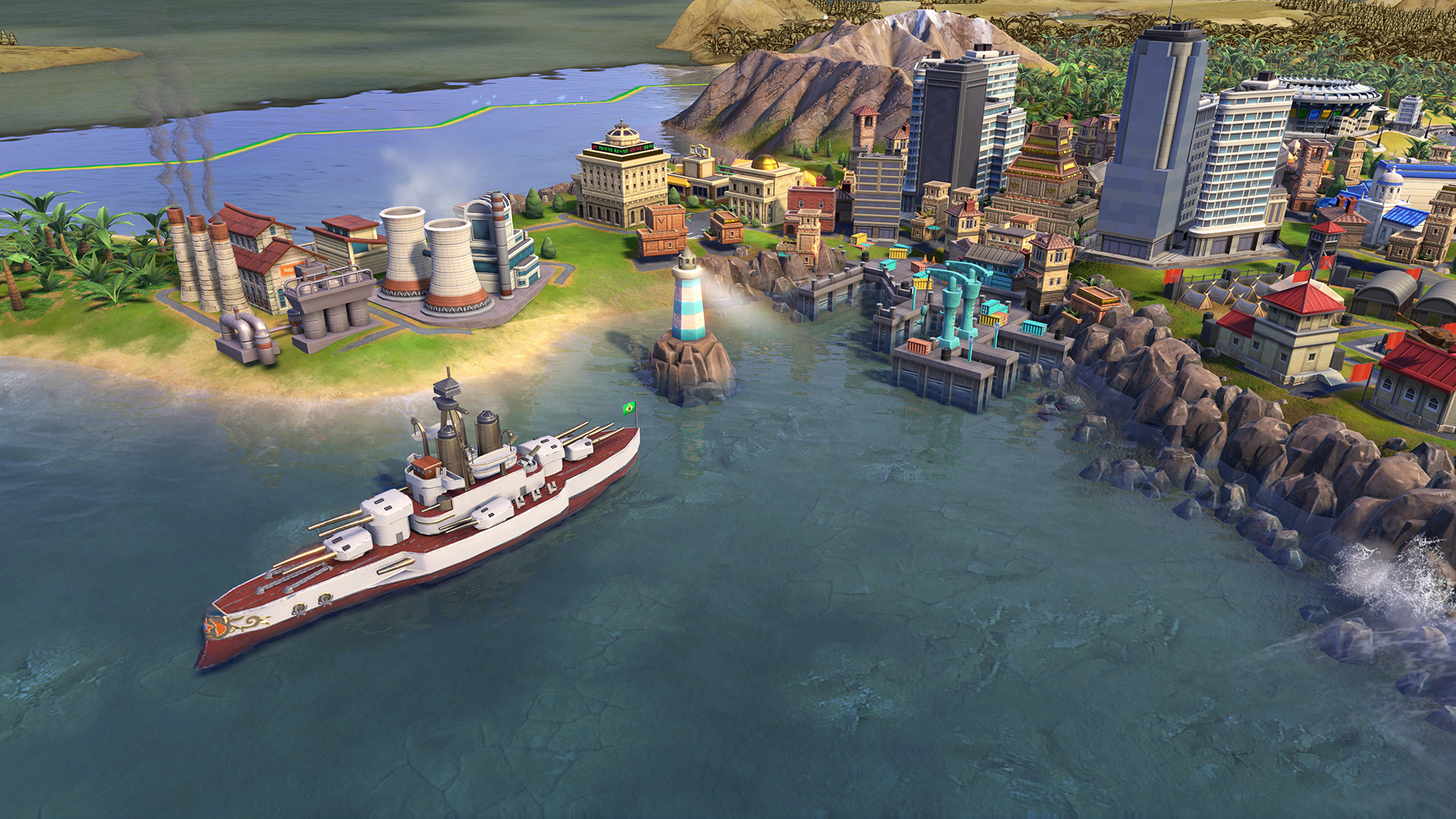 Through what I can only assume to be long-distance sorcery, Emperor Qin Shi Huang of China contacts me to ask: what need had I for world wonders when I could simply visit his empire instead? True enough, his capital is only a short scroll away and the whole exchange could pass for playful banter, but I knew better – our diplomatic profile billed Mr. Qin as a person who covets Wonders, and my latest construction had his full attention.

While we still are on friendly terms, my caution isn’t exactly suppressed. His second leader agenda, the one that the game secretly and randomly assigns to AI leaders, remains a mystery. Was he an expansionist as his real-life counterpart, or did he harbor strong feelings for certain ideologies? In a sense, it was the familiar acting in ways as-yet-unknown, one which extends to the rest of Civilization VI.

As Montezuma, the returning leader of the Aztecs, it was in my interest to swiftly expand in the early stages of the game. I had Eagle Warriors, after all, stronger variants that also convert defeated foes into free Builders – incredible two-in-one value. It was clear to see: a vast jungle kingdom that went from militaristic leader to scientific fore-runner, the crown envy of the world. At least, that was the plan.

In reality, I quickly found my capital in dire need of amenities a couple of turns in. With city management now in greater focus, growth is determined by both housing and amenities. The first relies on buildings and districts, while the latter is the game’s new happiness factor. As such, to keep amenities up we’re told to build entertainment districts and to secure more luxuries.

Thankfully, the Aztecs can share luxuries between cities so the solution here was to expand. My scout had been doing a fine job so far and, using the handy new map pin feature, I had already earmarked an excellent spot to settle on.

For such a small and simple addition, it’s a wonder how we’ve gone through five major Civilization games without the pin tool. You’re free to change the icons and call it whatever you wish, making it incredibly versatile for future planning – mark barbarian encampments and resources, or simply use it as a rally point. What truly makes it a godsend, however, is the fact that it works in multiplayer too, making point-of-interest discussion far more convenient; we no longer have to rely on vague descriptions and mental Pictionary!

As I scrounged up the production unit for both a settler and their escort, my scout finally made contact with a city-state. As with Civilization V, these city-states dole out tasks in exchange for influence and bonuses. This time around, influence is represented by a three-tier envoy system tied to increasing trade rewards, and the civilization that manages to be their favorite is bestowed the title of suzerain. What’s important it is that each city-state confers unique bonuses to their suzerain, essentially granting players more options to chase after their desired victory condition.

By this point, I’ve already had a chance to see the eureka technology boosts in action. It’s hard to appreciate their full effect in one brief sitting but what did make an impressionable impact was the new civics system, whereby a select number of policy cards could be slotted into their respective Military, Economic, and Diplomacy spots. Thanks to fast research speeds, I was able to switch up my policies often and without penalty, taking better advantage of the situation at hand. Long periods of downtime meant I could lower military upkeep while increasing gold output, whilst invading barbarian hordes meant swapping those out for combat bonuses and faster production. It made the game feel far more dynamic in the earlier stages, when there really isn’t all that much to manage.

Once governments are unlocked, the number of available Military, Economic, Diplomatic, and Wild Card (accepts any type of policy card) slots vary. The rate of research also slows down a little, making policy changes less frequent – by this point most civs would already have an idea of which victory path to take anyway, making this a non-issue.

On the flip side, I didn’t get to see what religion had in store. If online rumors are to be trusted, then developers Firaxis Games have supposedly fleshed it out for aggressive playstyles, injecting some variety to the cookie-cutter military route.

The revisions don’t end there, of course. Players now have a reason to be a little more invested in Great People production than the seemingly random surprises that they were before. In Civilization VI, each Great Person has a different skill – for example, one Great Scientist could offer three eureka boosts whereas the other grants a free building in the campus district – and whoever earns the requisite Great People points first gets to make the first pick.

They’re presented in a list you can scroll length-wise, each Great Person listing their attributes and a recruitment progress bar underneath. Players may also choose to pass and save up their points for the next roster if so desired, though our hands-on session didn’t extend long enough to see how that would work out.

For anyone who’s played Civilization enough, you’d know that three hours is but a taster of what the game offers. I didn’t get to see the mid-to-late gameplay, or how managing larger armies and cities would be like, but what I do know is that the early game presents much more activity than in previous iterations. Firaxis’ intention was to shake us out of our comfortable, memorized strategies, and to that end they’ve happily succeeded.

While plenty of changes have been added to make the game dynamic, they have left in core staples such as the overhead strategic view, advisors, and the all-encompassing Civopedia. With most of the surface seemingly appearing similar, one has to get their hands on the game to see all the new changes actually come into play as one cohesive whole.

But yes, it’s no longer a question of whether we should move on from Civilization V to Civilization VI, but a matter of when. And once you sink your hands into it, you’ll be clicking the hours away with the beloved (and equally dreaded!) “next turn” button.

Civilization VI releases for PC on 21 October 2016 and, in case anybody’s doubtful, modding will be supported.

Ade thinks there's nothing quite like a good game and a snug headcrab. He grew up with HIDEO KOJIMA's Metal Gear Solid, lives for RPGs, and is waiting for light guns to make their comeback.
Previous post Review: Kingston HyperX CloudX Pro Gaming Headset
Next post This is the BattleTech game we have been waiting for