Impressions: Swift conquest in the Legends of Callasia's beta 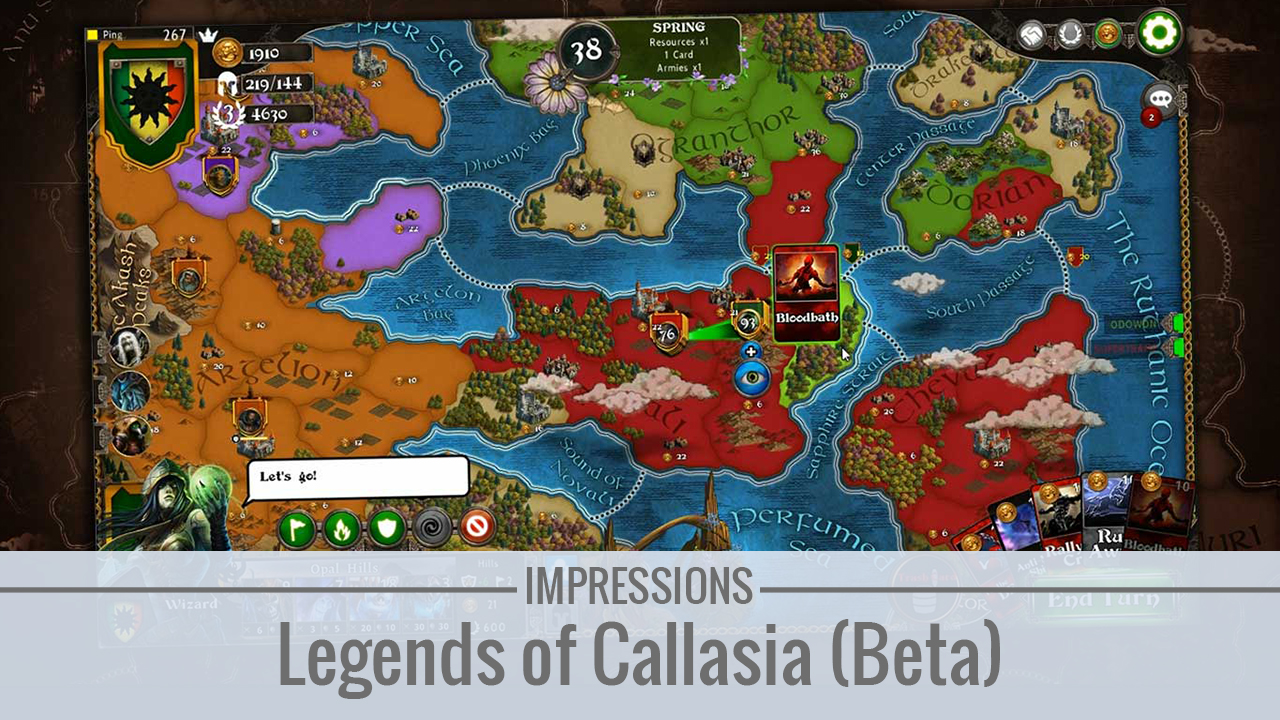 Boomzap Entertainment’s Legends of Callasia is in its final week of fundraising on Kickstarter. Unfortunately the campaign isn’t doing too well, as early momentum slowed to a crawl in the days before Christmas. Perhaps it’s a victim of the holiday season, the growing caution with crowdfunding, or simply unfair dismissal due to the studio’s mobile roots. Whatever the reason, the public beta demonstrated one thing: a game you shouldn’t pass on.

I get the impression that Legends of Callasia was crafted under huge, fluttering banners bearing imagery of PC game Heroes of Might and Magic and board game Risk. Boomzap even cites those games as influences but, honestly, the comparisons couldn’t be any more apt. Seeing the fantasy setting and army building of Heroes married with the territorial conquest approach that is Risk makes for a game I wish was already completed.

That said, I need to stress that the game is designed for tablets too. That means Legends of Callasia sacrifices depth in the interest of speed. This isn’t a title to consider when you’re in the mood for a grand strategy epic spanning days or even weeks; this is for those who’d like a quick round of conquest either alone or with friends, just before calling it a night.

Boomzap achieves this quick match turnaround by designing relatively small maps. The largest supports up to five players and, even then, it didn’t take much scrolling to see what all my opponents were up to. It’s essential to know what’s going on as well, since the turn-based nature of the game makes every move an important one. If I see everyone else locked in combat then I sure as hell plan on stealing a few territories. Likewise, if I see someone gathering their forces a few “tiles” away then it’s pretty much a sign to muster for battle.

To combat slow pacing and potential stalemates, players can build portals as a land improvement, facilitating quick troop movement between the city and elsewhere. However this also means one less village for the empire, lowering gold production and supply limits. It’s up to players to read the situation and choose accordingly — just keep that turn counter in mind!

As for actual combat, Legends of Callasia may prove divisive by making them automated. No qualms for Risk fans or those prone on hitting the auto-resolve button, but certainly disappointing for anyone looking to command their painstakingly raised army.

While the current system works fine as is (and I had fun silently cheering on my wyverns during close match-ups), it would have been even better had they provided a separate hand of non-replenishable combat-only cards. Engaging the player during battles — be it through cards or target prioritization or whatever else Boomzap can come up with — imparts meaning to the combat screen itself, which at the moment serves only as visual fluff.

The same can be said for the cards, which range from targeted sabotage spells to unit summons and more. They’re a welcome feature, adding an extra layer of strategy to the turn-by-turn play, but at present feels far too random for anything competitive. This randomization feels like a carry-over from the mobile gaming realm and could do with a rethink; allowing the player to pick one from three drawn cards is always a safe bet. Nonetheless, I noticed a tool tip saying “Feature in Progress” so it looks like they already have some ideas planned out. Having more unit choices, more card variety, and more building options are all content that Boomzap can work on in time; after all this is an early build. Yet doing so will prove difficult should they not receive the funding they need. And compromising due to a reduced budget would be such a shame, because Legends of Callasia is a great strategy game for the time-pressed gamer, and we definitely could do with more of those. If anything, the Steam Greenlight community seems to agree.

Legends of Callasia will be available for PC, Mac, iOS, and Android, with full multiplatform multiplayer and a persistent user account between devices. Beta versions for OSX, Android, and Linux will be released shortly.

Ade thinks there's nothing quite like a good game and a snug headcrab. He grew up with HIDEO KOJIMA's Metal Gear Solid, lives for RPGs, and is waiting for light guns to make their comeback.
Previous post App Assessment: Rune Story (An)
Next post HyperX teams up with Xbox One for official headset