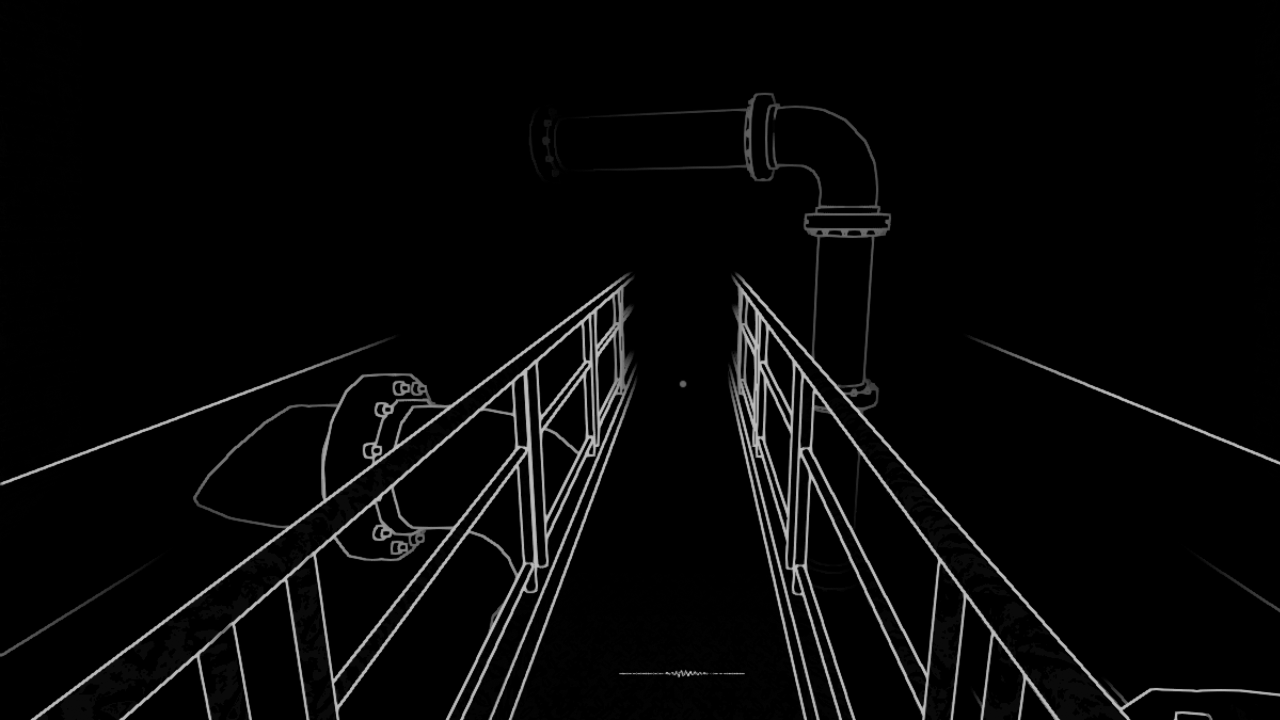 Horror games have crawled out of its well and back into our lives. You know the market’s grown large enough when Resident Evil abandons the action-heavy route for creepy crawlies and jump scares, so imagine my delight when the E3 demo of Stifled lands in our inbox; we’ve seen our fair share of horror but nothing quite like this.

Gattai Games are a Singaporean developer and Stifled will be both their debut and potential shot to fame. The game’s been in the public eye for quite some time, first as a DigiPen project and later as a playable build at GameStart 2015. What separates it from the crowd is its core mechanic – we won’t be relying on film, batteries, or hiding spots but on sound.

To play the demo, one should have a microphone on hand; sound maps out the environment much like how Matt Murdock in “Daredevil” perceives the world. By whimpering, talking, or shouting into the mic, you create echolocation pings at varying intensities, lighting up the world in different amounts.

And the reason why you’ll be whispering and miserably tapping forward should be evident enough: monsters.

So here I am, dazed from a car accident and out in the middle of nowhere. The few clues scattered about reminds me to never mix anti-depressants, bourbon, and vehicles, while letters and a blood trail suggest I wasn’t traveling alone. I immediately wish I could zoom in to observe and read the clues better but it’s a minor quibble, this being a demo build and all.

The letters are interesting in that they set up for the reveal later on, although what truly grabs my attention is the fact that I can see, and in color too! That means the protagonist isn’t visually impaired, making the looming darkness even more suspicious and creepy.

In the main menu, there’s an option to calibrate the microphone for both noise floor and the low and high points. Talking to myself got tiring fairly quickly – I settled on the dragon shouts from Skyrim – so I’m pleased to report that blowing air and whistling work just fine. Otherwise, there’s a key to make to ping on your behalf.

It isn’t long before I arrive at this sewer gate, justifying my earlier Dragonborn moments.

Sensibly, the rest of the demo takes place underground, avoiding any questions of light pollution. More importantly, it forces the game to be linear so progression is straightforward – you won’t be wasting time feebly wandering around in the dark here. The cramped spaces help to heighten tension too, which is important because most of the horror here is ambient in nature.

Stifled doesn’t employ jump-scare tactics or high-strung music. All it does to get our poor hearts racing is to utilize fear of the unknown, to offer players a double-edged sword with which to navigate the world. Even when there’s clear signposting, the knowledge of something about to happen does little to hold back the rising tide of panic.

The great thing about the whole monochromatic look is that danger is very clearly represented via color. Being in the sewers, Gattai can’t use physical scale to project threat – think dragons, towering full-plated knights, and generally large bosses – but what they can do is to artificially shrink that already limited space.

Monsters emanate their own stark red pings, effectively granting them a much larger presence. It may be nothing more than a visible threat ring yet the fact that it pulses affords it a much more primal sense of foreboding.

The vocalizations these monsters make are reminiscent of a fussing baby, if babies were large enough to stalk sewers and drag pipes. While unsettling, the growing suspense ultimately falls flat once I lay eyes on one.

It’s underwhelming. The monster lethargically shuffles from one end to another, hands outstretched as if were a zombie. For some reason it has a lumpy, deformed head, bringing to mind the infected hordes from The Last of Us. “Baby Clickers,” I find myself inadvertently say.

And just like that, my bubbling cauldron of fear reduces to a gentle simmer. I’ve associated the monster with familiar, defeated foes, and the illusion of the unknown is lost. Never mind the fact that I didn’t know how fast they move or attack when aggravated, they were simply Baby Clickers now.

The lackluster monster design is the sole element I find disappointing in the demo. I wish they were far less upright and humanoid in their movement, far less predictable in their AI pathing, and certainly far less seen – the more I successfully sneak past them, the less frightening they become.

But there may be a narrative reason behind it all if this scene is any indication. If so, I hope it’s revealed early on rather than dragged out till the end . The demo already gives enough material to speculate with and it’d be maddening not to know why these monsters are, as far as survival-horror monsters go, tame.

Or perhaps I have no idea what I’m in for. Perhaps these Baby Clickers are merely lobotomized tutorial versions, and that the ones with superhuman hearing and invisibility are lying in wait beyond that final room.

All that said, I did enjoy having to tread lightly around them in certain areas. Walking on water and metal staircases sound very different compared to dirt and cement, and the waves throw much farther and wider than expected. These were the only times where I grew concerned about the monsters, hoping that my trusty rock would be enough of a last-ditch distraction.

While it’ll no doubt be a hit with live streamers, I’m curious to see how Gattai will develop the microphone mechanic further. As it stands, the pings alone don’t offer enough diversity from a gameplay perspective. Since anything having to do with voice recognition will be prohibitively expensive, they’re going to have to tackle it with puzzles, items, or some other approach before the microphone starts feeling gimmicky.

Nonetheless, the Stifled demo has proven to be an enjoyable experience and I’m eager to return once it’s finished. Gattai have crafted a horror experience that’s fresh, inventive, and a legitimate stab at our intrinsic fear of the dark. To go against the wisdom of Iron Maiden, I hope this one does draw near.

Help Stifled get on Steam through the Steam Greenlight program!

Ade thinks there's nothing quite like a good game and a snug headcrab. He grew up with HIDEO KOJIMA's Metal Gear Solid, lives for RPGs, and is waiting for light guns to make their comeback.
Previous post Civ 5 veterans and composer Christopher Tin return for Civilization VI
Next post Don’t Miss: Monster Hunter Generations Launch