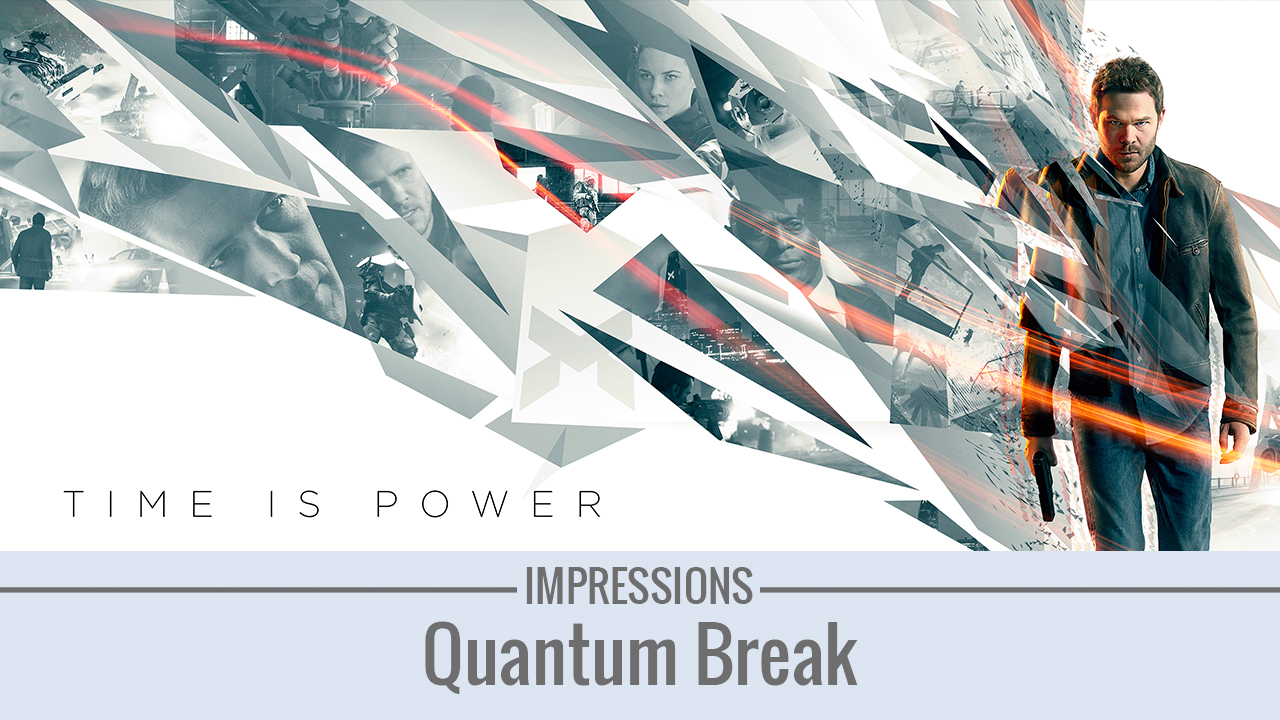 Storytelling, characterization, and cinematic action has long been Remedy Entertainment’s strengths. Their Max Payne and Alan Wake games bathe in critical praise, embedding deeply within gaming’s collective memory. The Finnish studio doesn’t break stride with Quantum Break, and it may just be their most ambitious title yet.

I remember being swept over by skepticism during Quantum Break’s premiere. The year was 2013, and the Xbox One was already struggling with accusations of being a TV box than a gaming console. When Quantum Break revealed it would have a live action series, it seemed like an attempt to once again bridge the two entertainment mediums in a way nobody asked for.

The problem was Remedy and Microsoft were far too vague about the whole live action angle. Now that I’ve messed with the preview build I finally see what they were aiming for. It works, it’s captivating, and I really want to see the next chapter now.

Since story hogs the spotlight, Quantum Break opens up to some heavy exposition. I don’t like revealing too much but the “fight to stop the end of time” focuses on Jack Joyce and Paul Serene, hero and villain. These two play extremely important figures, not because the fate of the universe rests entirely on their shoulders (well that does count for something), but because they share something in common: you.

Both men were present when the fateful time experiment went haywire. The misadventure grants each a measure of power over time itself, although, the exact nature of their abilities differ: Jack gets to stop time, whereas Paul can see potential futures. The two are soon embroiled in a head-to-head fight that has Jack facing Paul’s ominously named corporation, Monarch Solutions.

If you’ve kept up with the trailers then you would have seen Jack in action. He can deflect bullets, dash great distances, and place time-stopping bubble fields. It sounds immensely overpowering but all it does is put him on an equal footing against the waves of beefy enemy soldiers – they soak up way more damage than Jack can.

We’ll spend most of our time in his shoes, overcoming firefights and navigating past light environmental puzzles. Expect to use those time manipulation powers to solve both, and I suspect difficulty will ramp up once Jack unlocks more chronon abilities.

Paul enters the picture at the end of each act. We do take control of him but only very briefly, and for a vastly different purpose. As the head of a corporation, he does what is expected of him: making decisions. Players are presented with two choices during a story junction, and each option is richly presented and explained thanks to Paul’s precognition.

Granted, player choices and branching stories aren’t exactly novel thanks to the wealthy resurgence of RPGs in recent years. But Quantum Break’s art direction and presentation is really quite special, evocative of today’s serial dramas. Paul’s future sight and narration impart a sense of gravitas to each decision, and it’s certainly more engaging than a line of text.

More importantly, Paul’s segments makes way for those live-action scenes I harped about earlier. The faithful recreations of characters and sets go a long way in making the jump feel seamless, seeming more like a pre-rendered cut scene turned up to 11. The cast of professional actors help too – if you can’t quite place your finger on who Jack Joyce’s real-life counterpart is, he’s actually Shawn Ashmore (X-Men). Other actors include Aidan Gillen (Game of Thrones), Lance Reddick (The Wire), and more.

Essentially, we’re looking at a three-part structure to each act: gameplay, decision-making, and live-action. Each decision does come with a different acted episode, which in turn affects gameplay in the following act, so there’s quite a bit of replay value to be had here.

Big-budget productions have lately turned to massive open worlds that may or may not be online, or multiplayer-only games that funnel their cash to lavish marketing campaigns instead. We’ve had our fair share of visually spectacular linear games this console generation, but either story wasn’t a key considerationg or it simply turned out to be a mechanical dud.

On the other hand, Remedy Entertainment has a reputation it clearly intends to keep with Quantum Break. Their quest to craft a strong narrative may have come at a slight expense to gameplay, but I’m banking on the hope that combat gets more interesting later on. Even if it doesn’t, there’s that story I desperately want to see more of. Perhaps blending TV and games aren’t so bad after all.

Quantum Break releases on April 5, 2016 for Xbox One and Windows 10 PCs.  [Correction: The Windows 10 version of Quantum Break comes free with pre-orders of the digital console version only.]

Ade thinks there's nothing quite like a good game and a snug headcrab. He grew up with HIDEO KOJIMA's Metal Gear Solid, lives for RPGs, and is waiting for light guns to make their comeback.
Previous post The GDC Awards’ animated tribute to the late Satoru Iwata
Next post Ratchet & Clank blasts off on April 12