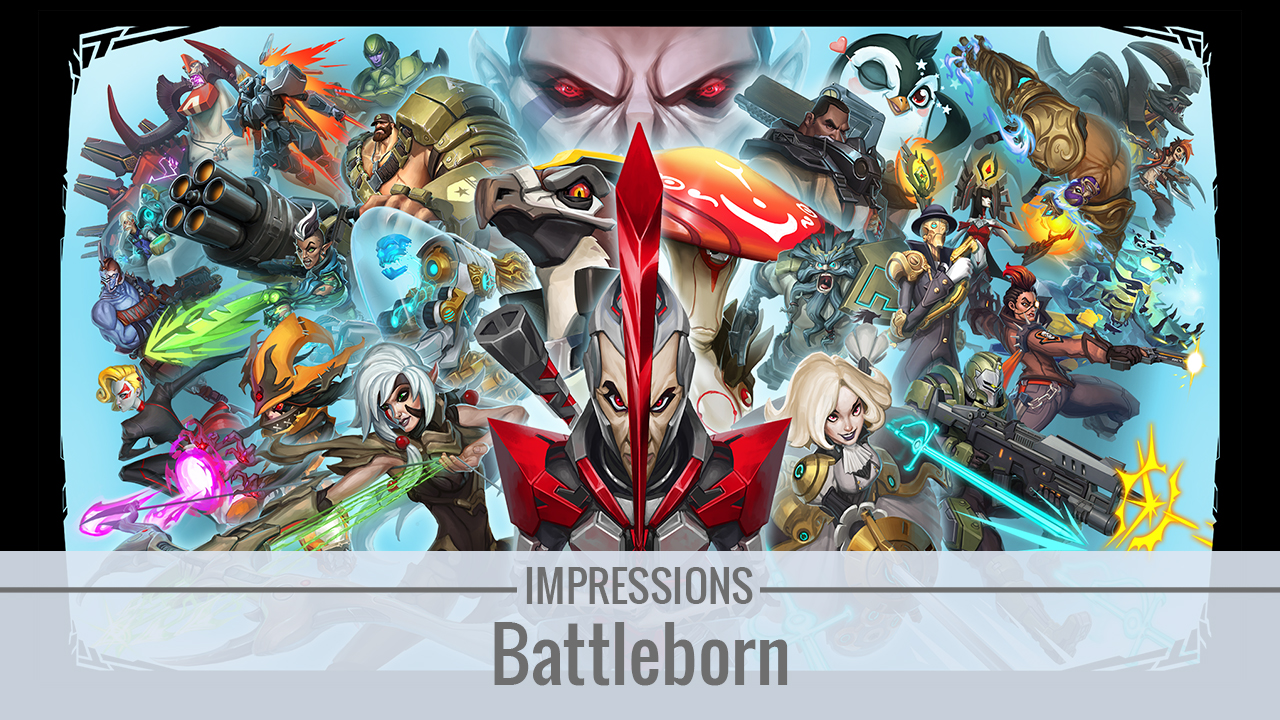 Release schedules can be difficult. Gearbox Software’s hero shooter, Battleborn, supposedly faces steep competition when it releases next month, three weeks ahead of Blizzard Entertainment’s Overwatch. Or will it?

While the two games certainly portray the same melding of genres, their similarities don’t go beyond ‘team-based’, ‘online first-person shooter’, and ‘unique heroes’. Having played beta builds for both, that’s a stance I can now confidently stand behind.

Thankfully, Battleborn is getting an Open Beta soon so everyone can find out first-hand. If you’re wondering whether the download is even worth the time then you can stop, because that answer is yes.

This preview follows a media session held at 2K’s offices. It began with a recap of the game’s story: a fight over the last star in the universe. Five factions band together to form the Battleborn, a last stand against the dark Veralsi, and we’ll get to live out their exploits through the campaign.

We were given an exclusive mission to try, one that had us defending cores against waves of enemies in a bid to rescue Caldarius, thus unlocking him. While I wish I could tell you what that story was like, I can’t. Playing the main healer on a new map took all my attention, and every lull in combat was spent hunting for caches, assigning new skills, or building node turrets.

Which is to say that Battleborn’s PvE content is refreshingly challenging; Gearbox Software’s experience with the Borderlands series clearly paid off. Even with a full five-person team we embarrassingly failed at the final wave, in what can only be summed up as a “holy shit” moment.

For clarity, our team was composed of Toby, Marquis, Oscar Mike, Reyna, and Miko – a tank, two attackers, and two supports respectively. 2K stressed the importance of team balance and I’m convinced it made us last longer than we would have in those final moments.

Even if all I managed to hear was disjointed snippets of story, it was hard to miss the Battleborn banter. They weren’t talking to each other per se, just quips at opportune moments, but some of their lines are so (intentionally) comical you can’t help but laugh. And then I remembered Toby was an “anxious, self-loathing” penguin in a powered suit, whereas my character was literally a humanoid mushroom.

If Gearbox felt creatively restrained with their human characters before then they certainly didn’t now. And that playfulness is what distinguishes Battleborn from Overwatch, at least character-wise, as Blizzard is aiming for something a little safer. Gearbox isn’t skipping down the road to Saints Row here, but when a rogue robot butler exclaims, “Oh look, the less fortunate” upon seeing the enemy, you know you’re in for a ride.

Shifting gears, let’s talk PvP. We played Incursion, a 5v5 mode where teams are tasked with destroying the other’s two Spider Sentry Drones. Again, 2K reiterated team balance, as well as showing how silly charging in alone would be – a solo player died to the sentry in three seconds. The goal was to escort your minions to the sentry, who will then make short work of its incredibly tough shields.

This is where Battleborn shows a strong resemblance to MOBAs. The Overgrowth map, playable during the Open Beta, is linear with room to sneak around frontline combat. Collectible shards are dotted around the map, used to build and upgrade turrets at fixed nodes, hire a beefier minion, or purchase personal equipment for passive bonuses.

This time, our team was Marquis, Ambra, Montana, Ghalt, and Benedict. As Ambra I wasn’t much of a support, spending most of my time waving a big stick at enemies and mercenaries; it wound up proving that support characters were every bit as badass as the attackers were.

Ambra excels when paired up, naturally, but is entirely capable of holding her own. Unlike most magical characters, you’ll want to get up close with this priestess, so much so I think of her as a corrupted medic – buzz around your tank to stay alive but keep that beam plastered on the enemy instead. The Solar Wind ability, a cone-of-fire attack, are just the teeth you need when targeted or cornered, giving enough bite to finish off weakened opponents or deter them long enough to flee.

Like most MOBAs the fight chugged on, although not unpleasantly so. The linear map meant less running around to get to the action, and the shards, mercenaries, and nodes offered enough respite from head-on combat while still staying productive.

The match ended up deadlocked after our strong opening. We still won for dealing the most damage to sentries, but it plainly demonstrated a need for team coordination as we couldn’t muster a final push for the final, half-dead sentry. Definitely get a headset because those player pings will just get lost in the noise.

Bearing in mind we only played that one match, I found Battleborn’s PvP just as entertaining as its PvE was, which, up till now, had been my sole reason for looking forward to the game. The world could always use more co-operative adventures, and Gearbox has done a fantastic job on that front. Please let that other PvP mode, Meltdown, be as hilarious as it sounds — where else can you escort sacrificial minions to a furnace god?!

There’s no knowing how the online community turns out, or whether the campaign is as satisfying as I expect it’ll be. Maybe small annoyances, like how Miko automatically faces the character he’s healing, grow intolerable after thirty hours. What I do know is that Battleborn is shaping up to be a fine new IP for Gearbox and 2K. Just don’t make players second-guess with the pricing models, okay?

Battleborn releases on May 3, 2016, for PC, PlayStation 4, and Xbox One. Open Beta details here!

Ade thinks there's nothing quite like a good game and a snug headcrab. He grew up with HIDEO KOJIMA's Metal Gear Solid, lives for RPGs, and is waiting for light guns to make their comeback.
Previous post Wargaming League: The Grand Finals 2016 Live
Next post Wargaming CEO wants company to be more effective