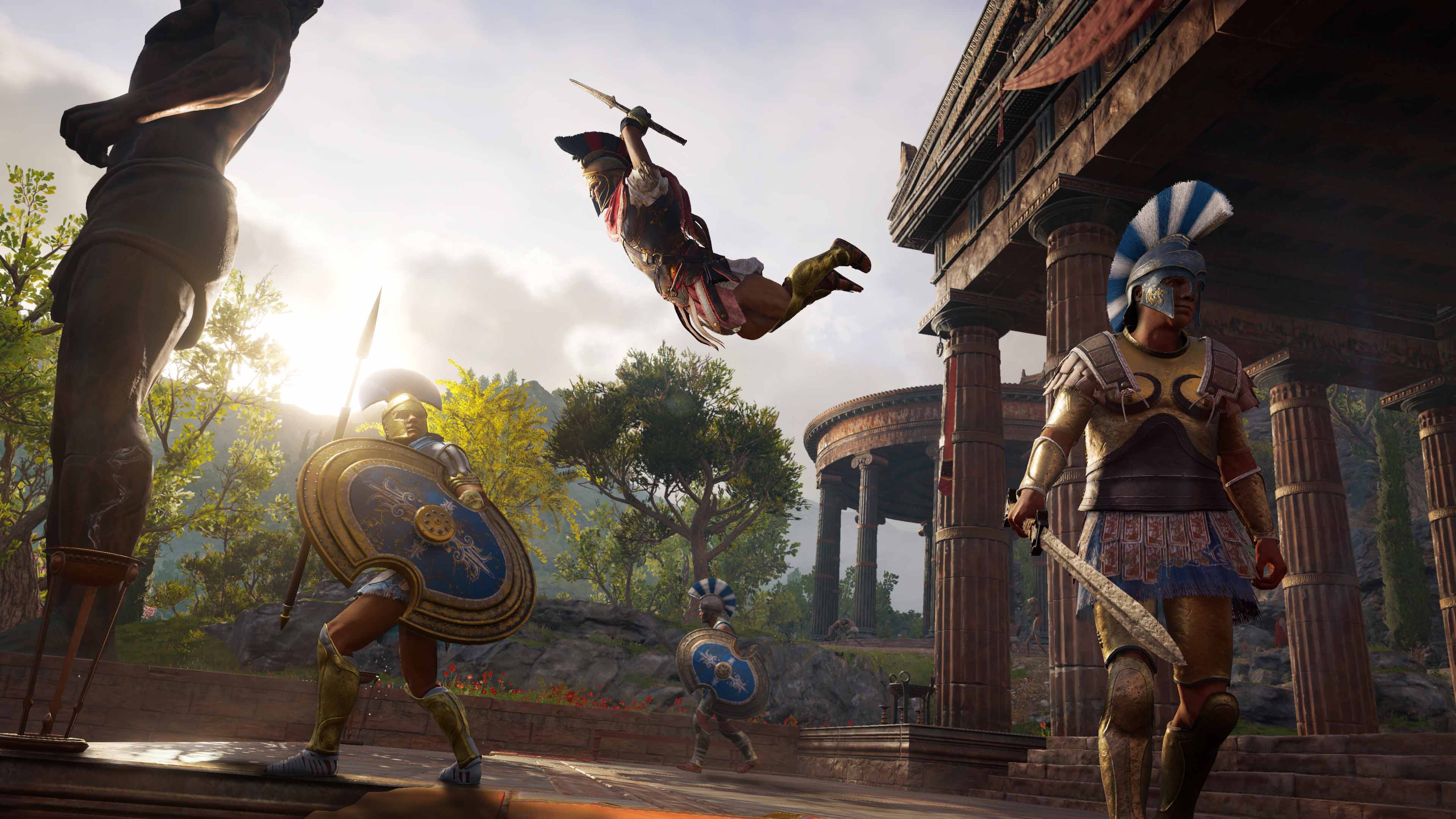 Ubisoft are fully embracing the RPG model with Assassin’s Creed Odyssey, implementing dialogue choices, branching quests, and different endings. They’ve even promised multiple characters for us to romance, all of which looks like an attempt to fill the “BioWare RPG” void.

We sampled that new direction in a hands-on session at Ubisoft Singapore, one of the supporting studios on the game. It was the same build shown off at E3 2018, featuring a level where the philosopher Socrates (or “Sokrates” as the game spells it) charges us with the fate of one prisoner. Do we rescue him as a valued member of a rebellion, or do we put an end to the loose cannon? I’m told that there is a consequence beyond the scope of the demo but, without seeing it first-hand, who knows just how large of an impact that might be. A new crewmate? A jeopardized mission?

Rather, what was noteworthy about that exchange was Sokrates himself. Where most quest givers are content with telling you where to go and what to do, and maybe even why you’re doing it, Sokrates simply shares his information before proceeding to challenge your thoughts. Although our protagonist balks at the idea of having another lengthy debate with the philosopher, there’s a dialogue option that questions the prisoner’s crime and resulting death penalty. Pretty novel for a series where killing is almost usually the answer.

Aptly, Sokrates isn’t a moral compass but a mirror, there to have players stop and scrutinize their own actions. Most of us will still pick whatever path suits our personal goals, of course, but it shows that Odyssey will try to engage us on a deeper level. What’s also interesting is that our protagonist starts as a mercenary, free from any higher duty or calling. It’s a first for the series, expanding that player freedom mantra they have for gameplay over to the narrative department too.

That might change once we discover how Alexios or Kassandra connects to the larger Assassin’s Creed lore. Odyssey takes place four hundred years before Origins — chronologically making it the earliest game in the timeline — which leaves us with First Civilization content and possibly the founding of The Order of the Ancients, precursors to the Templars.

Even so, the Peloponnesian War the game takes place in is rich with its own history. Focusing on those aspects, without shoehorning the modern-day timeline or excessive sci-fi components, may do Odyssey the same consistency and pacing favors it did for Origins.

With Spartan blood running in our character’s veins (they’re direct descendants of King Leonidas), combat in Assassin’s Creed Odyssey sees some interesting changes. Replacing the hidden blade is Leonidas’ broken spear, apparently a First Civ artifact but just as deadly as a weapon. Despite the heavier armor and gear, we’ll still get to sneak on rooftops and in bushes, getting the leap on an unsuspecting guard or two. Alternatively, slip out the bow and (flaming) arrows for some ranged engagements.

While the core systems are very much Origins, we do get some new abilities and revised skill trees. There’s a front kick, for instance, which simply begs for a 300 quote whenever the recipient is sent flying, or a move that lets you steal and use an enemy’s shield against them. A total of three different skill trees support different styles of play, but what’s important to note is that many of these are active abilities as opposed to passive boosts.

To support that, Ubisoft have implemented shortcuts to map some of these skills. These go a long way in diversifying a combat system that has always felt one step short of “great” — I can now blind foes when surrounded, speed up duels against shielded guards, or get in a life-saving heal. Outside of that, much of Odyssey feels familiar. We have the eagle Ikaros for bird’s-eye surveillance and tagging, the parkour systems for fluid world navigation, and a loot and leveling system that may as well be in every other modern AAA game. With Ubisoft jumping back onto what appears to be an annual release schedule, it’s hard not to wonder if Odyssey will see some sales fatigue at launch. Origins only launched last year, and that was a massive game that not everyone is done with. Assassin’s Creed Odyssey does see some advantages with its new branching dialogue and quests, and a setting beloved by pop culture, but ultimately that hands-on demo didn’t conjure the same excitement that a new property such as Skull & Bones did.

Perhaps sitting through the first few opening hours and getting a better feel of the story and systems would fix that. What’s for certain, however, is that Odyssey is already a fantastic looking game, one providing a specific experience on a a scale unlike any other. If you’ve fallen off the Assassin’s Creed cart and didn’t try Origins, then you certainly ought to keep an eye on how Odyssey turns out.

Assassin’s Creed Odyssey releases on 5 October 2018 for PC, PlayStation 4, and Xbox One.

Ade thinks there's nothing quite like a good game and a snug headcrab. He grew up with HIDEO KOJIMA's Metal Gear Solid, lives for RPGs, and is waiting for light guns to make their comeback.
Previous post ASUS announces new ROG Strix Fusion 700 and Strix Fusion Wireless
Next post Shin Megami Tensei Liberation Dx2 Global Release on iOS and Android