Hands on with the ASUS GX800 Super Notebook 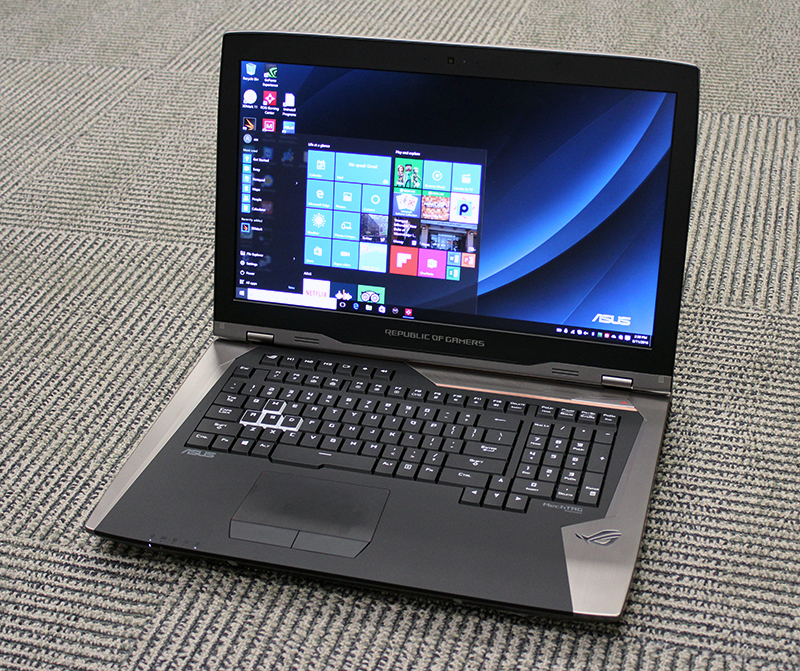 Earlier this year, ASUS amazed gamers with its outrageous ROG GX700 gaming notebook. It packed serious firepower under the hood, but more crucially, it was the world’s first liquid-cooled notebook. And now, ASUS wants to announce its successor. Dubbed the ROG GX800, this new notebook is bigger, faster, and more extreme in every possible way. Join us now for an in-depth preview of this gaming beast.

Like its predecessor, the ROG GX800 was designed with one aim in mind: to be the most powerful notebook on the market. There are no compromises here and the ROG GX800 is packed to the brim with the latest and greatest technology available today. Let’s start with its hardware first, because that’s what gamers are most excited to know.

The processor comes from Intel and it’s the familiar overclockable quad-core Core i7-6820HK (2.7GHz, 8MB L3 cache). However, maximum clock speed in the ROG GX800 has been boosted to a heady 4.2GHz, 200MHz more than what you get from the ROG GX700. We also have a whopping 64GB of DDR4 RAM. Storage has been adequately taken of, courtesy of not one, not two, but three super-fast Samsung SM-951 PCIe-based SSDs in a RAID 0 configuration!

Graphics processing duties are capably handled by NVIDIA’s latest and greatest. And gamers will be able to count on the firepower provided by two NVIDIA GeForce GTX 1080 GPUs in SLI. You can find out more about NVIDIA’s latest mobile GPUs in our earlier coverage here. But the key thing to note is that these new mobile GPUs are architecturally similar to their desktop counterparts, and NVIDIA claims will offer nearly identical levels of performance.

But just how powerful are NVIDIA’s latest mobile GPUs? To give a taste, we managed a Fire Strike score of 19585, which compares very favorably to the ROG GX700’s (desktop GeForce GTX 980) score of 11555.

Clearly, this is a notebook of extremes. Unfortunately, since the unit we have is an early prototype, we will be reserving performance benchmarks for later. But here is a teaser of what users can come to expect from the ROG GX800.

So, the ROG GX800 has been beefed up on the inside, but what about the outside? Like its predecessor, the ROG GX800 comes with a specially designed liquid-cooling dock called the Hydro Overclocking System, and it has been thoroughly improved. The pipes have been widened so that more coolant can be piped around the system. Additionally, the docking mechanism has been improved with uprated valves so that leaks can be minimized. Finally, ASUS has added more rubber washers within the dock itself, between the pump and the two 92mm large radiators, to reduce vibrations and keep noise levels down.

On the plus side, the dock is still wonderfully simple to operate. Simply align the ROG GX800 to the pins on the dock, push down on the locking lever to secure the notebook, and you are good to go. Like the system in its predecessor, pushing down on the lever causes liquid-cooling pipes to extend from the dock to meet the notebook’s matching inlets to form a closed circuit, allowing coolant to circulate within the notebook. A complex system consisting of a two-way piston rod and O-rings ensure minimum leakage during docking and undocking. Sensors within the dock warn users if coolant levels are running low, and a port at the side lets users easily top up the coolant reservoir.

For readers with sharp eyes, you might have noticed that the ROG GX800 is larger. That’s because the display has been increased to a larger 18.4-inch one. It uses IPS display technology, and as befits a high-end gaming notebook that’s been outfitted with two of NVIDIA’s most powerful mobile GPUs, it also supports 4K resolution (3,840 x 2,160 pixels).

That’s pretty apt, because we have been saying for quite some time that 4K displays on notebooks are a bit superfluous, because very few mobile GPU configurations can adequately support them for gaming. Twin GeForce GTX 1080s should be able to do the job.

Fans of mechanical keyboards will be happy to know that the ROG GX800 also gets a keyboard upgrade in the form of ASUS’ own MechTAG mechanical keyboard (Mechanical Tactile Advanced Gaming). The keys have individual RGB backlights and can be customized by users to display various colors and even animation effects. And according to ASUS, the keys have been designed to mimic the feel of Cherry MX Blue switches.

There’s no doubt that the ROG GX800 is a gaming notebook designed for demanding and discerning enthusiasts. Everything about it is truly top notch, from the choice of CPU and GPU, right down to the ridiculous storage subsystem consisting of three super fast PCIe SSDs in RAID 0. And then there’s the icing on the cake, which is its Hydro Overclocking System, which will unlock even more potential.

The phase “desktop replacement notebook” has been thrown around quite freely in the past when referring to oversized and powerful notebooks, but really, there’s always a bit of a disclaimer that came with those systems. They came close to offering desktop levels of performance, but they were never truly as powerful as very high-end desktop systems.

The ROG GX800 changes all that. Thanks to NVIDIA’s latest GPUs, the gulf in gaming performance between desktops and notebooks has never been smaller. In fact, if NVIDIA’s claims are true, it might even have been completely eradicated (we can’t wait to benchmark NVIDIA’s latest mobile GPUs properly and see what kind of performance we can get). And with the ROG GX800’s unique liquid-cooling system, we won’t be surprised if the ROG GX800 even outperforms some high-end gaming desktops. The ROG GX800 is therefore, quite literally, a true “desktop replacement notebook.”

At the time of writing, we were told that the ROG GX800 will be available some time later this year. Prices have yet to be confirmed, but don’t expect the ROG GX800 to come cheap. As a reference, the older ROG GX700 was over S$6,000.

(With contributions from our sister site, HardwareZone.com)

Aaron Yip is an industry veteran with more than 15 years of experience. When not spending time on his gaming PC and consoles, he can be found in Hyrule solving ungodly puzzles and collecting gems.
Previous post 50 Things to know about Final Fantasy XV
Next post The new Razer Blade Stealth with Intel’s Kaby Lake processors is here