Home / Reviews / Previews / Fly to the Moon in Borderlands: The Pre-Sequel

Fly to the Moon in Borderlands: The Pre-Sequel 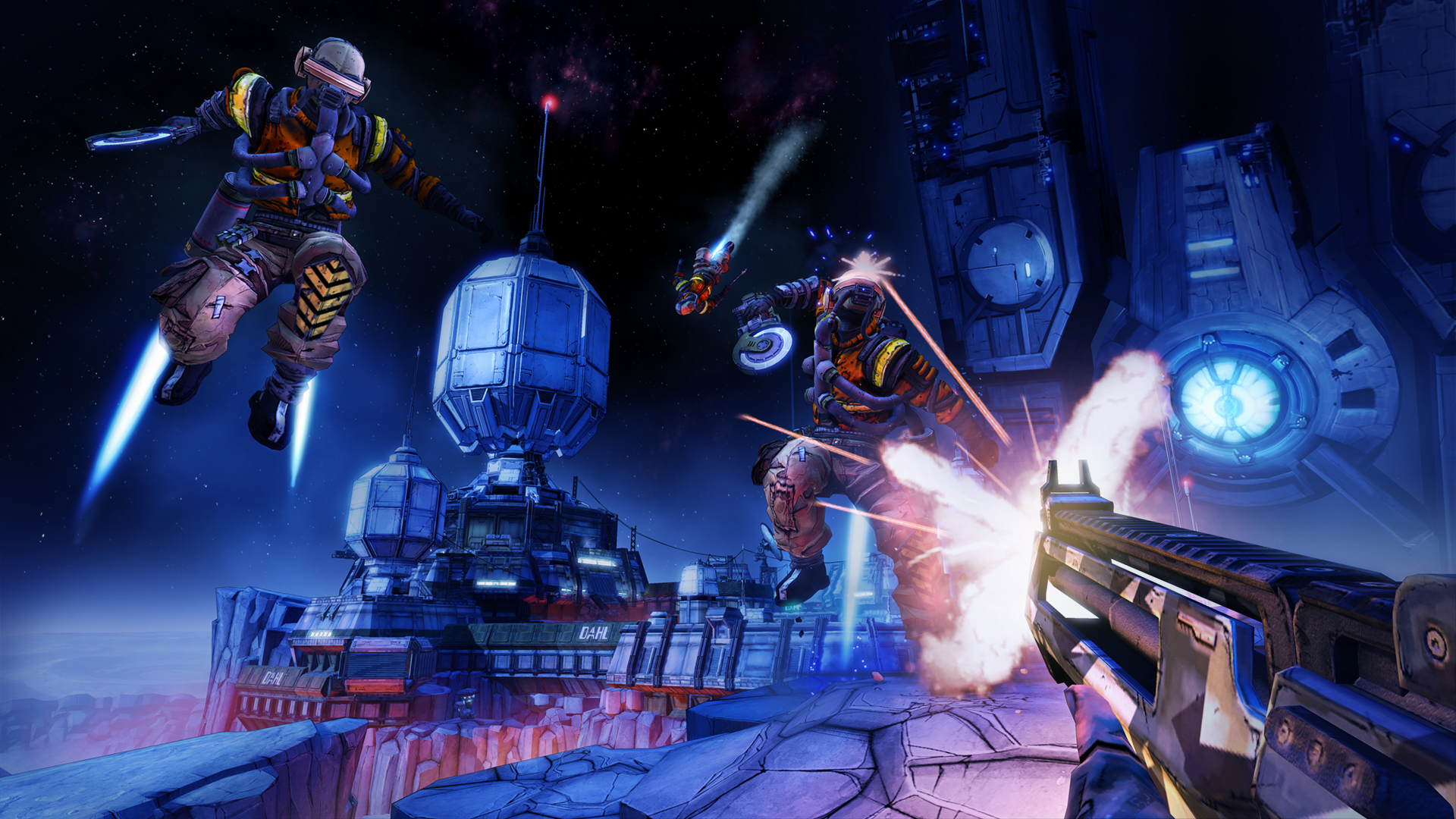 The name may have leaked a few days early but what is a “Pre-Sequel” anyway? Now that the embargo is lifted, we’re ready to share some answers.

It’s certainly a confusing title but Borderlands: The Pre-Sequel can be best thought of as Borderlands 1.5. It’s the prequel to the sequel, explaining the events that led to Handsome Jack’s rise to power. It isn’t developed solely by Gearbox Software, either.

Their shooter-looter-partner is 2K Australia, fresh off the oven after working on BioShock Infinite. Nonetheless, the game utilizes the Borderlands 2 engine so don’t expect any radical changes.

The preview here in Singapore was basically a video of the press reveal over in New York. After a quick introduction by Gearbox CEO Randy Pitchford and 2K Australia’s general manager Tony Lawrence, we were treated to a hands-off demo showcasing what’s new.

Let’s start with the one thing fans of the series can delight over: Claptrap will be a playable character, complete with a lowered camera perspective. Start dancing!

Claptrap is joined by three other characters and all of them work for – surprise, surprise – Handsome Jack. We’re getting the former Crimson Lance assassin Athena (Borderlands), Hyperion engineer Wilhelm (Borderlands 2) and the gunslingin’ Sheriff (Borderlands 2).

Disappointingly, we won’t get Wilhelm as the huge lumbering mech we know him as. Instead, the Pre-Sequel takes place during a time when he’s still a man. A heavily armed and dangerous man, at least.

Only Athena’s skills were on display in the demo. She’ll play closer to her namesake as a Greek goddess, with an Omega letter representing her active ability. Said ability lets her digitally construct a shield that absorbs all damage from the front, before Athena tosses it back like a grenade. I didn’t write down what it’s called but I believe it’s “Aspis” – the Greek term for “shield” – or some variation of it.

It seems like you still have to angle the shield at the incoming shot for it to work so it’s not simply an activate-and-laugh sort of thing. At higher levels the shield bounces off targets to hit multiple enemies, which actually sounds really fun in certain situations. Up close, however, and she’ll bring out her plasma sword for a melee attack.

The left-most talent tree, the one we got a look at, specializes in Athena’s role as a tank, capitalizing on the use of her shield. One talent node literally allows her to taunt nearby enemies, thereby absorbing more damage for the eventual shield toss.

H is for Hyperion on the moon

The moon in Borderlands has been the one constant in the sky. Since this isn’t going to be a full-fledged sequel and they didn’t want to revisit Pandora, it made sense to finally let players see Hyperion’s moon base from up close.

This new environment brings with it two things: a lack of both oxygen and gravity. The former means players now have to monitor their oxygen supply, provided by a new accessory, which is automatically replenished indoors, at oxygen stations or by standing on-top of oxygen fissures. That last one seems like a clunky bit of game design but it does alleviate the need for consumable oxygen tanks.

The latter means you jump higher and things, including loot, can float away. To return some maneuverability and control, all players will have a jetpack that consumes oxygen. Now we can traverse larger gaps and do a ground-pound, which can be enhanced with elemental explosions.

Where Borderlands 2 introduced the Slag element, Borderlands: The Pre-Sequel introduces Cryo weapons. We finally have ice bullets! Pitchford says Gearbox debated the idea before but 2K Australia didn’t care and implemented it anyway, something he’s incredibly happy about.

The effects look great for the most part and I look forward to seeing how it plays with the other elements. Will using fire on a frozen enemy cause him to melt? What happens when you freeze a poisoned enemy?

Interestingly, Gearbox and 2K will not be bringing this game to the PlayStation 4 or Xbox One. Their reasoning is that current-generation platforms are where the audience is already established. I suspect it may have to do with the fact that Gearbox is busy working on new technology and thus, do not have the technical manpower to spare.

After spending countless hours on the first two games, I’m curious to see how playing a third would feel, especially when we’re still getting DLC for the second. While it helps that we get new classes every time, there’s still a risk of the game’s charm turning stale. It’s a complicated issue but for now, the series looks like its still in safe waters.

Borderlands: The Pre-Sequel will release later in 2014 for Windows PC, PlayStation 3 and Xbox 360.

We’re bound to get a tonne of Claptrap players online so guys, seriously, it’s time to add a dance emote.

Ade thinks there's nothing quite like a good game and a snug headcrab. He grew up with HIDEO KOJIMA's Metal Gear Solid, lives for RPGs, and is waiting for light guns to make their comeback.
Previous post We Nearly Had a Star Wars Game with Darth Maul
Next post Half of All In-App Purchases Happens Within 7 Days