Preview – Days Gone has got ‘story-centric’ down to a T 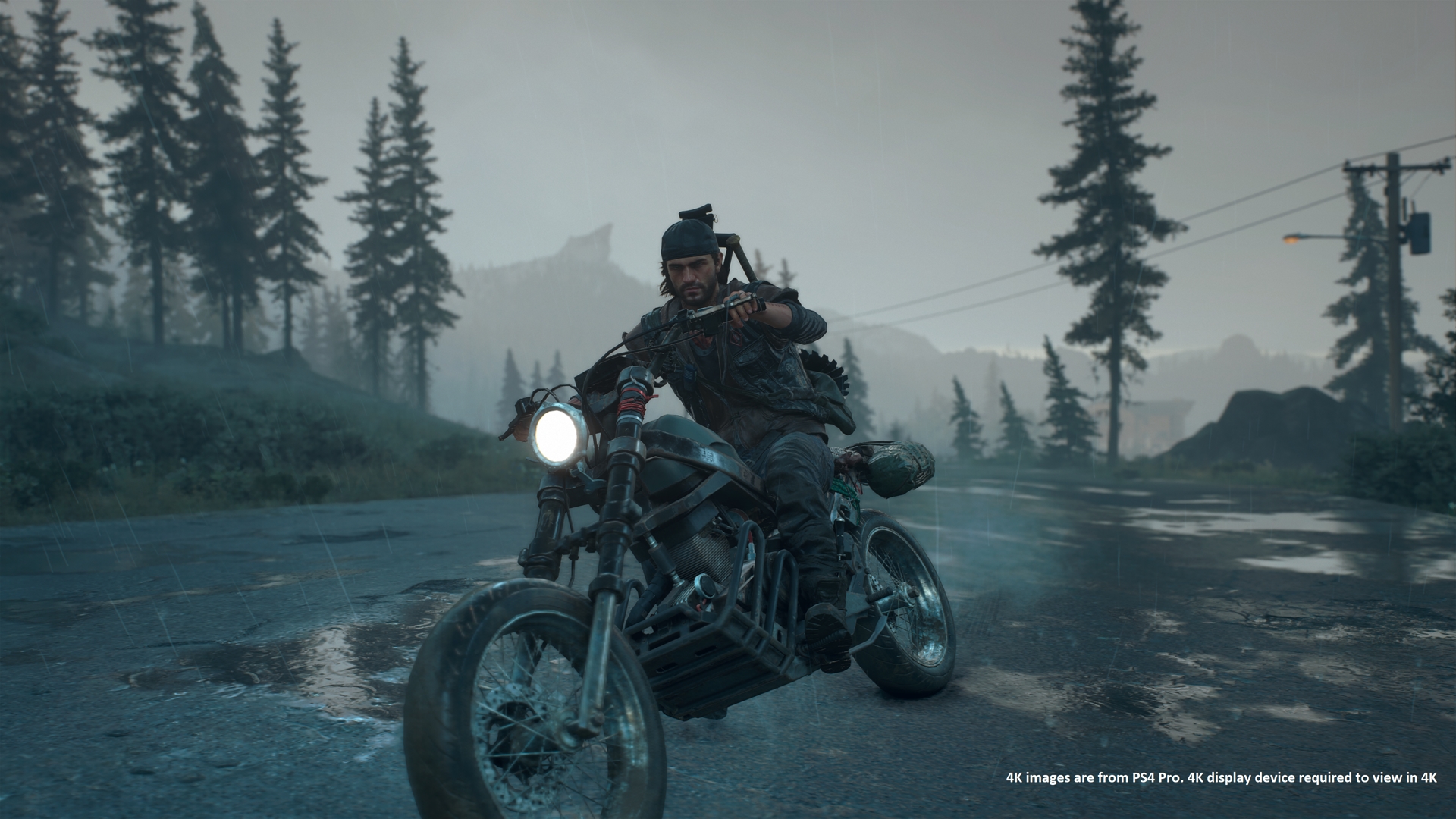 Move over, Resident Evil. You and your sentient piece of tofu have had enough time in the zombie spotlight, because it’s now time for Days Gone and its Freakers to steal the show!

Sony Interactive Entertainment (SIE) invited GameAxis to try a closed-door demo of the action-adventure game in Bangkok, Thailand, sometime last month. At first glance, Days Gone looks thematically similar to The Last of Us — both are story-centric games in a post-apocalyptic world with bandits and “zombies”, but there are more than a few things that set it apart.

The world of Days Gone is a lawless one, ravaged by bandits and zombie-like entities called Freakers. They’re the unlucky “survivors” of a global pandemic several years back, forcing the surviving humans to quickly band together and scavenge among the scraps. Although some colonies chose to preserve order, most groups have opted for banditry to survive.

Enter Deacon St. John, a weary bounty hunter plying the roads of the Pacific Northwest with his biker pal, Boozer. In the opening cutscene, Deacon experiences a flashback to several years ago, where he ditches an escape plan with his wife, Sarah, to accompany an injured Boozer. Days Gone sets the tone of brotherhood right from the get-go, and it continues to play a major role through the rest of the demo. 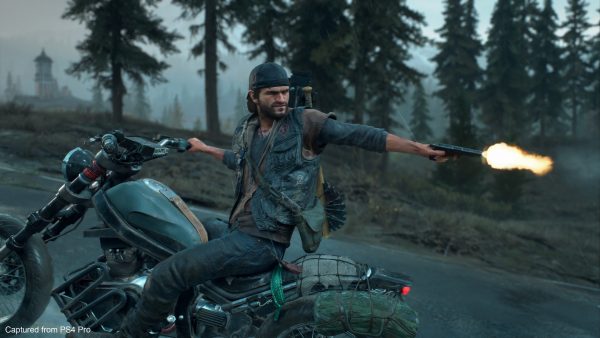 What’s more fascinating is the game’s environment, which can change within a matter of seconds. A baking sun can give way to a torrential downpour, which can just as quickly turn into snow. However, the weather changes aren’t just cosmetic, they have tactical implications too.

Freakers, unlike regular zombies, are still alive. They need to eat and sleep, and as nocturnal creatures will give you a hard time if you go wandering around at night. That also means rain is a blessing in disguise, since it helps to mask the sound of your movement. That helped me quite a bit during one of the missions, where I had to sneak around several Freakers in pursuit of a bike thief. Essentially, I feel that Days Gone is actually a lot more realistic than some people might give it credit for.

After the intro cutscene, we’re quickly taught the basics of combat and repair. Deacon’s main mode of transport is his trusty drifter bike, which gets a little roughed up during the first mission. After mercy-killing a traitorous colony member, he hides it under a bunch of foliage and proceeds with Boozer to get a fuel pump from a nearby garage. While they’re travelling, Deacon and Boozer discuss the topic of “heading north”, although it’s not explicitly stated why they should. 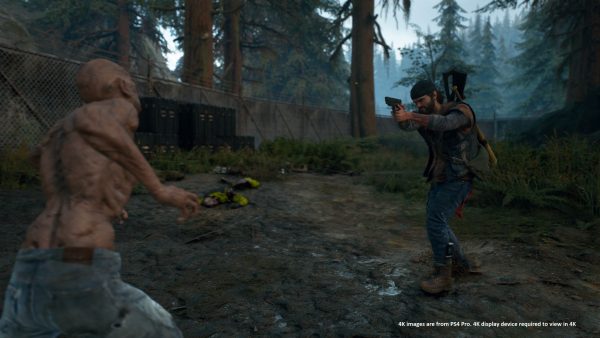 Be smart with your ammo, you’ll need it. (SIE Bend Studios)

Here’s where we first get to fight the Freakers. Combat is rugged and brutal, which is to be expected given the men’s rough-and-tough biker style. However, there is some measure of fluidity in how Deacon fights, which nets you a certain “kick” when done properly. The mechanics are generally easy to pick up in time, so beginners won’t suffer too much.

Days Gone introduces two variations of Freakers at this point: Swarmers and Newts. The former are your run-of-the-mill “zombies” and should be easy enough to handle on their own. The latter, representing infected children, are nimble opportunists who camp on rooftops and strike when you are vulnerable. Those are more annoying.

When it comes to games that have variable approaches, I would say I’m more of a “do first, ask questions later” kind of guy. With Boozer distracting most of the Freakers, I quickly dispatch the remaining five or six Swarmers near the garage with my pistol and boot knife. The latter is a real life-saver, as it’s the only weapon in the game that is unbreakable. Admittedly, it doesn’t deal a ton of damage, but beggars can’t be choosers when you’re out of ammo. 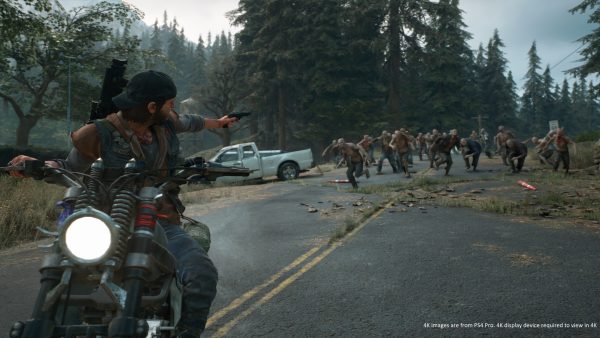 How to Survive 101: Don’t pick a fight with a Horde. (SIE Bend Studios)

At this point I was a little bit low on health, which made me a prime target for a Newt attack. Unsurprisingly, about two or three of them attacked when I climbed onto the roof of the garage. The Newts are pretty agile, and their small frame makes shooting at them a little more difficult, but with a bit of skilful prediction and leading I was able to kill them without too much trouble.

That said, don’t get on the business end of a Horde if you can help it. That’s basically an army of Swarmers who operate as a single unit. If one spots you, the rest will be all over you in seconds. One, two, or even three Swarmers can be dealt with rather easily, but don’t play hero when a forty-strong crowd comes charging. Fortunately, Hordes are usually encountered while you’re riding around, so there shouldn’t be any issues outrunning them.

Of brotherhood and hope

To be honest, the story progresses a little slower than I’d like. Deacon’s bike is stolen, he visits Sarah’s grave to remember how he met her, and then he encounters some government agents experimenting on Freakers. That’s all I got to see in two hours, which may seem like a lot, but according to the developers there’s about 30 hours worth of story in Days Gone. I guess I was only scratching the surface.

During the demo, I constantly saw examples of Deacon and Boozer’s unfailing trust and teamwork, which is actually really inspiring. We already saw one example during the first mission: in order to allow Deacon an opportunity to snag a fuel pump, Boozer offers to distract the Freakers around the garage. However, while doing so he gets ambushed by bandits, who promptly start torturing him with a blowtorch. Deacon, having collected the fuel pump, races to Boozer’s rescue and kills the bandits. 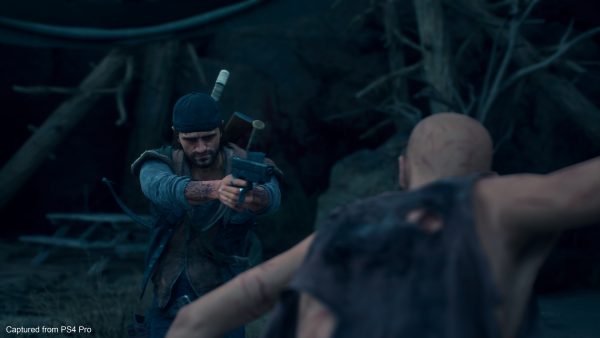 That said, while brotherhood is one of the main themes, it’s not the central idea propelling the narrative — it’s hope. Indeed, that ‘hope’ for a better tomorrow seems to be the underlying principle driving Deacon, Boozer, and many of the other survivors. “Heading north” is probably just another way of saying it, but it’s a great representation nonetheless.

My last mission involved rescuing a survivor from a Freaker-infested neighbourhood. The first part requires you to locate the young girl, who turns out to be hiding in a boarded up house at the edge of town. She’s pretty smart, too, having already evaded both the bandits and Freakers for several days.

Once you find her, having “taken care” of the bandits outside the house, it becomes a regular escort-style mission back to your bike. Logically, a stealthy approach would have been preferred but, me being me, I decided to go wholesale and fight our way back. After one unsuccessful attempt (yup, I died), we had almost made it to the bike when we ran into the first boss of the game. Fantastic. 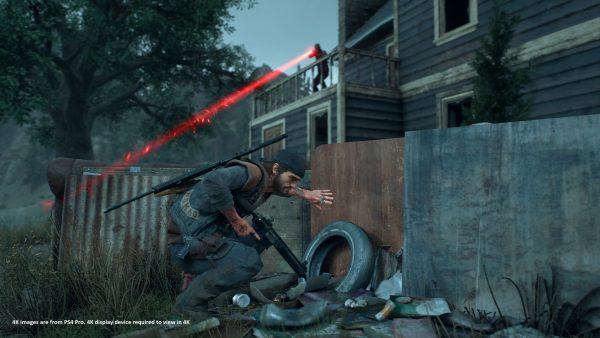 Ah, a tyre! Just what I needed! (SIE Bend Studios)

Those last 15 minutes involved four things: me, an infected bear, an abandoned diner, and a lack of ammo. It was quite thrilling when you factor in the bear’s bloodthirsty red eyes and its ability to spot me through walls. I spent roughly five minutes up on the roof of the diner trying to figure out a game plan, and another five trying to get the bear to run by an explosive barrel I hoped on blowing up. Unfortunately, there’s no flashy ending to this tale as my time eventually ran out.

I’ll be honest. Initially, I thought Days Gone would feel like a carbon copy of The Last of Us. Suffice to say, I’ve never been happier to be proven wrong.

I realised the central themes for both games are polar opposites, and that Days Gone is much more emotionally compelling. The Last of Us is considerably darker, with Joel and Ellie’s journey emphasising the difficulty of staying alive in a destroyed world. On the other hand, Days Gone is more optimistic, choosing to focus on Deacon’s personal struggles and how he overcomes them by keeping that faint glimmer of hope alive. 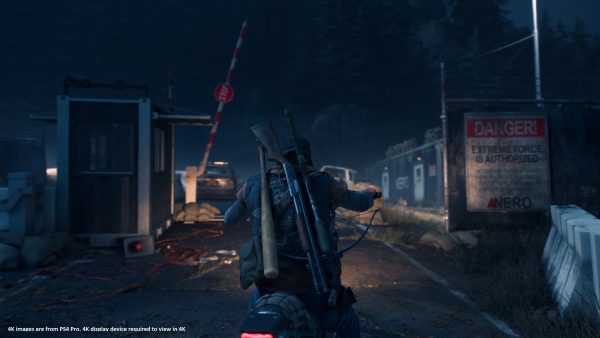 On the technical side, I think Days Gone‘s mechanics are rather easy to pick up and understand. Story progression and optional challenges are clearly defined, although the former can be a little slow. Meanwhile, the combat is challenging but not Dark Souls-level difficult. It’s rather forgiving in terms of timing windows, but still fluid enough to feel realistic.

All in all, the Days Gone demo already checks a lot of boxes: excellent story, smooth gameplay, and realistic open-world versatility. One can only imagine what the full game has to offer, and I’m really looking forward to defeating that bear at release.

We weren’t the only ones at the Days Gone event! GameAxis got to speak with SIE Bend Studio’s community manager, David Lee, in a group Q&A that provided more insight into the game’s narrative and development. Check back soon for that!

Kenneth is your dedicated jack of all trades gamer and borderline anime nut. When not writing, he likes to wind down with Overwatch, Apex Legends and a bit of Fate: Grand Order on the side.
Previous post Preview – Sekiro: Shadows Die Twice is so challenging it’s great
Next post Blizzard and GOG.com team up to bring back classic Diablo, Warcraft