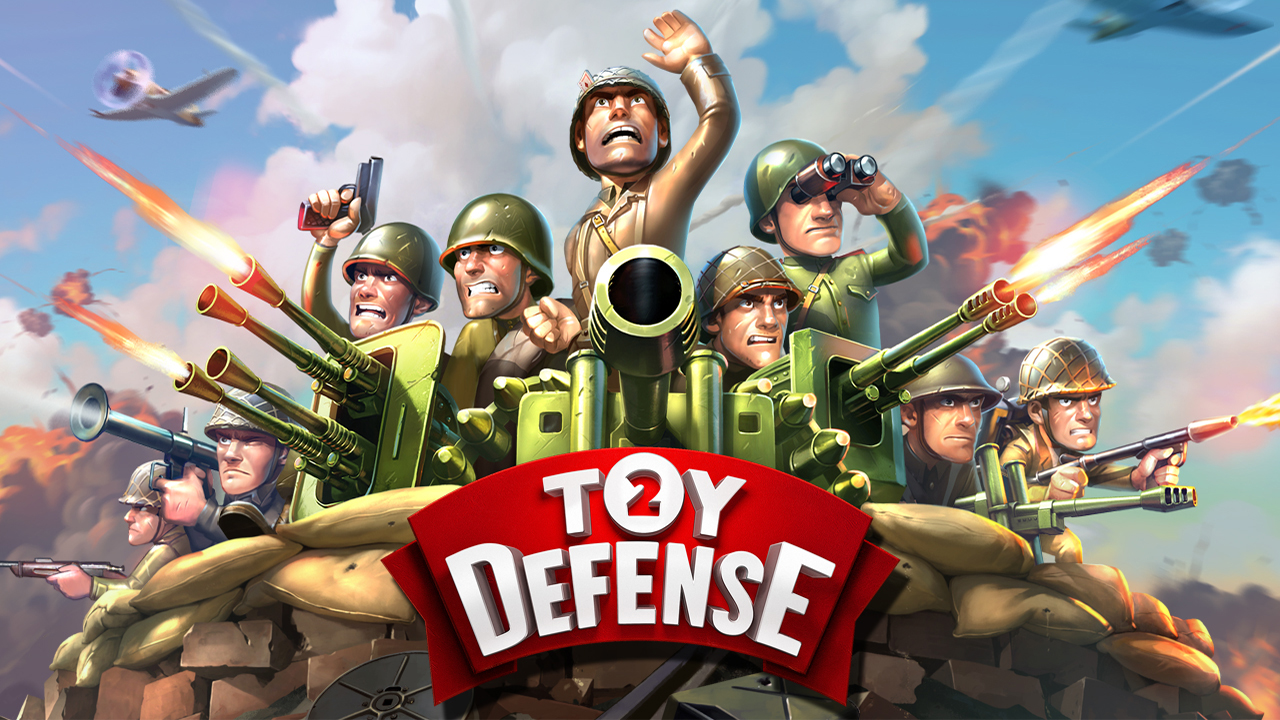 Themed after World War II, players in Toy Defense 2 get to march through four different campaigns each representing the USSR, USA, and Britain. The orders are simple: lay down defenses, guard the base against waves of enemies, promote or build more defenses, and simply survive. Yup, tower defense is back and its formulaic approach will leave you either bored or craving for more.

One doesn’t come across tower defense much on the app stores these days, not that it was common to begin with. To reinvigorate such a niche genre Toy Defense 2 takes the customization route, allowing players to dictate what they’ll excel in.

Units can be promoted as usual, but outside of battle these units get to be upgraded. Doing so raises the promotion limit and ultimately determines that unit’s specialization. Take interceptor planes for example, where we have to choose either increased operational range or getting a second plane for free.

In tune with that concept are unique units called Generals. These gain experience to level up passive bonuses such as faster XP gain or more money earned per kill, up to ten skill points. You could have a General with ten different passives, a balanced mix, or one that’s just really good at boosting your earnings. They come into play very early on and help introduce another cool feature: redeployment.

After battle players get to store a number of units for their next fight. The benefits are two-fold: stored units are cheaper to redeploy, and can be immediately promoted up to their previous rank as long as there’s money. This speeds up the early game and can be a life-saver when a battle is so dire that every dollar counts.

My time with Toy Defense 2 could be considered “enjoyable” – I happily burned through as many missions as I could per sitting – right up until things careened into “indifferent” territory.

The in-app purchases are completely optional and can be (somewhat) off-set by watching video ads. Their existence does, however, weigh on you after a while, and completely by design too. The cost for upgrades grow exorbitant for the amount you actually earn per battle, consumable power-ups devour premium currency, and trumping leaderboards are more a matter of financial investment than skill.

Toy Defense 2 is sufficiently challenging for the first few hours. There can be a few close-calls every now and again but nothing that can’t be solved by learning from mistakes or adopting newer strategies, such as replacing units with one situationally better – quiet artillery guns don’t mean much when the skies are swarming with enemy bombers.

However it’ll come to a point where you know your units just aren’t cutting it. This isn’t simply a case of “get good noob.” Why? Because you’ll have units all sitting at maximum rank with far more money than necessary, all the while watching enemies stroll into your base. As you can’t replay older levels to grind for upgrades, players have to either purchase more currency or jump into another campaign to earn some. The problem with the latter option is that unit upgrades are tied to their campaign. Let’s say you’re USSR, the default nation. Jumping into the British campaign means using British troops who have no upgrades because you’ve been busy playing USSR. And you can’t spend on British upgrades since that defeats the entire point of coming over in the first place – to save up for USSR upgrades so you can continue!

Alternatively you can use power-ups such as temporary slow-downs or healing to assist with difficult missions. These can only do so much though, and replenishing them with premium currency is just insane. It’s like playing a first-person shooter and paying a dollar every time you need to use a grenade, or watching ten video advertisements to achieve the same. It’s not a lot of money, maybe, but monetizing consumables shouldn’t even be an option.

Those power-ups come into play for the leaderboards too, which basically ranks people according to score. Naturally, the longer you survive the more enemies you kill, thus the higher your score. How do you extend survival? Power-ups of course, which you can stockpile on using real money.

I’m not against microtransactions and, to be fair, Toy Defense 2 isn’t the most egregious offender. It’s just that this game would have continued being enjoyable had it simply decided to gate content behind paywalls (and nothing else), or been a paid game, rather than squeezing for money the way it does. Unfortunately that is not how mobile free-to-play works, and a hundred other players will replace me.

Should you completely dismiss Toy Defense 2 then? No. For one you might think the purchases are simply no big deal. Objectively, it’s a fun tower defense that will get you a solid six hours or more of entertainment, which merits dropping some money into it. Doing so will extend playtime by quite a bit but spending any more will, in my opinion, only give diminishing returns. When it reaches that point I say jump ship – with the app store crowded as it is you’ll just land on another.

Ade thinks there's nothing quite like a good game and a snug headcrab. He grew up with HIDEO KOJIMA's Metal Gear Solid, lives for RPGs, and is waiting for light guns to make their comeback.
Previous post Take NBA 2K16 to the Streets with Mobile Versions
Next post Preview: Masquerada Songs and Shadows (PC)