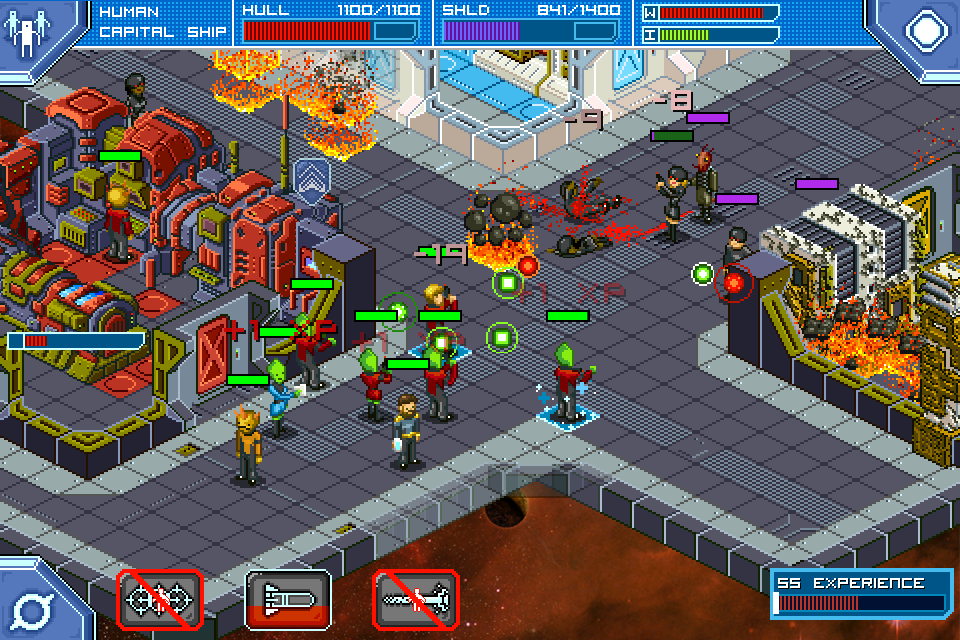 Fresh out after a bunch of Kickstarter campaigns is this well-hyped-about real-time strategy game. Think Kairosoft’s Hot Springs Story but with “Star Trek” written all over it.

Geeks in the loop of the App Store world may have been waiting out for this one for a while, especially those who plonked money into the Kickstarter campaigns, only for it to finally appear last week. Yes. This is a simulation game where you command your own Star-type Fleet squad and build parts of your own ship. You’ll be living the dream in gloriously animated pixel art carrying out missions in the unknown depths of space.

Star Command issues you a ship and a bunch of tokens to start you off. These said tokens will be what you use to “buy” rooms to build or sign on crew members on your ship. Rooms take on one of three types: Weaponry, Engineering and Science. These rooms can be further upgraded with more tokens for better efficiency. Some offence and defence rooms need to be charged with ammo tokens, taking up slots in your 15-slot token satchel.

Oh, and you can’t buy tokens, or health or shields for that matter. Star Command stands as a breath of fresh air in the App Store as a game without in-app purchases. The entire game is handed to you at its $4 price tag. Extra Build/Buy tokens are attained through mission completion or replays. Ammo tokens, well, you simply got to wait for your crew to get them for you, and they don’t generate while the game is in the background.

All new crew members unskilled, you assign your crew to what you feel they can be best at. The ones shooting guns and working your weapons are in red, the fixer-uppers in yellow and the healing support groups in blue. The captain maintains a grey ensemble, and his or her death means the end of the game past your last save.

The game hands you missions at a location on your navigation map and warping to it starts the battle. Your weapons and other miscellaneous defences will need time to charge up, and your enemy can most of the time attack first. This brings down your shields and make you vulnerable to enemy teleportations, allowing them to wreak havoc in your ship’s innards and your crew. Once your weapons charge up just in time, you attack through a minigame interface, aiming reticules to crosshairs or timing the tapping of circles.

You don’t necessarily have to fix everything up right away since your ship is indestructible (I haven’t done so badly yet that I have all my rooms destroyed) but fending off enemies who have illegally boarded your ship is one of your priorities. Only red shirts can attack, and can be backed up by blue shirts for health regeneration.

Enemies get more hostile along the way, with the power to drop several bombs on you or blow a hole in your hull (get a crew member near one and say goodbye). It is up to the player to strategise upgrades to strengthen either the crew or the ship first. Handle everything well, and you’ll gain victory with minimal deaths on a badly mangled starship.

Players will find one issue with the game is gameplay on a small screen. Even while zoomed in, I still managed to tap on a crew member when all I wanted was to tap on the room, wasting precious reload seconds trying to get another ammo token generated with half the ship ablaze. The game also has lapses in frame-rate on an iPhone 4S, and seems to be caused by clumping too many crew members together.

After hounding about the game’s rattling tale in outer space, you get to do it all over again in a more difficult level, although your efforts in battle would reward you with a bigger, more complicated ship to handle with your current crew members.

Star Command is wrapped in some wonderful pixel art and a lovely “alone in space” soundtrack. The game, currently in its release version, has a Coming Soon label on one button and the crew Contraband feature locked out. What these will hold will mean players will have to look forward to a future update.

With good planning and strategy (i.e. get your red shirts out of the bridge before battle), Star Command can be an enjoyable experience. If your idea of fun means directing crew members to their deaths, then this real-time strategy type game can suit you well.