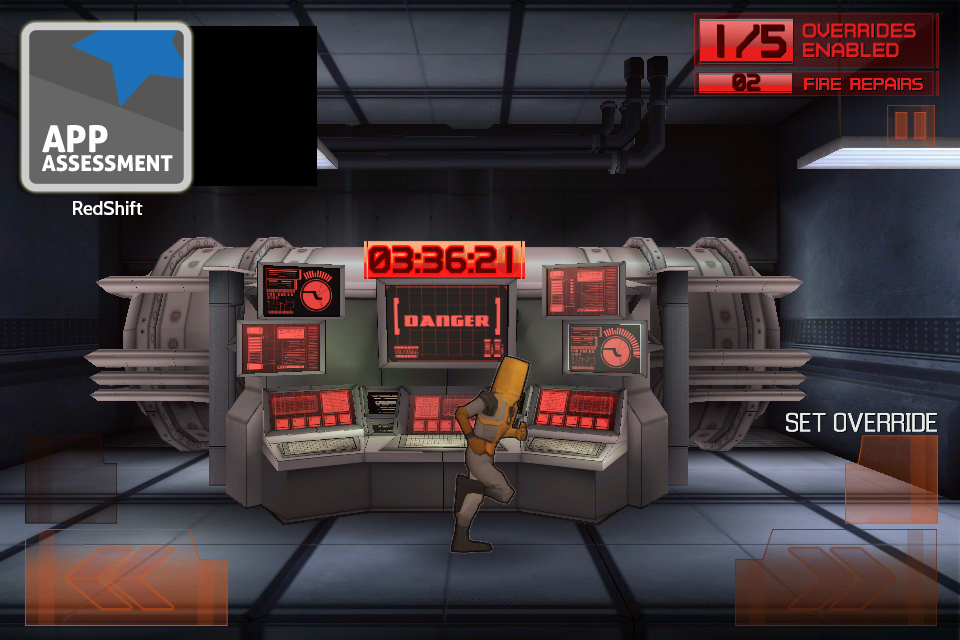 Ever had a recurring nightmare where the energy facility you work at is about to explode and it’ll be up to you to kick in all the overrides in order to prevent an almost certain demise? No? Probably just me then. For the rest of you, there’s RedShift.

You’re an unnamed drone in a facility that’s about to pop and you’re the only staff member left with a heartbeat going. It’ll be up to you to activate the five override terminals sitting around the facility before it is too late. Well, of course the override terminals are scattered around the winding hallways of the facility, making RedShift a mad rush to find all the overrides and make it back to the core before time is up.

Standing in your way is collapsed ceilings and raging fires, which you can quench with fire extinguishers you can pick up by rummaging through lockers and drawers. Searching for these tools eat up your precious time, though, so it’ll be a gamble over whether the room behind a fire contains an override terminal or an empty drawer.

The game carries varying levels of difficulty, which are unlocked once you survive one game on the preceding difficulty level. The differences between the levels is shown on the minimap, which either displays all the doors and fires, builds the map as you run through the halls or builds the map but soon forgets it, like doing cartography with a joke pen with invisible ink.

Each facility and its rooms is randomly generated for each game session, so no two forsaken facilities are ever alike. Each game session usually lasts no longer than four minutes, as the unstable reactor core would blow up by then, which makes RedShift a quick distraction for a frantic bit of action on mobile.

Assessed on an iPhone 4S. App originally released in April 2014. A copy of the game was purchased for review. App pricing accurate at time of print.