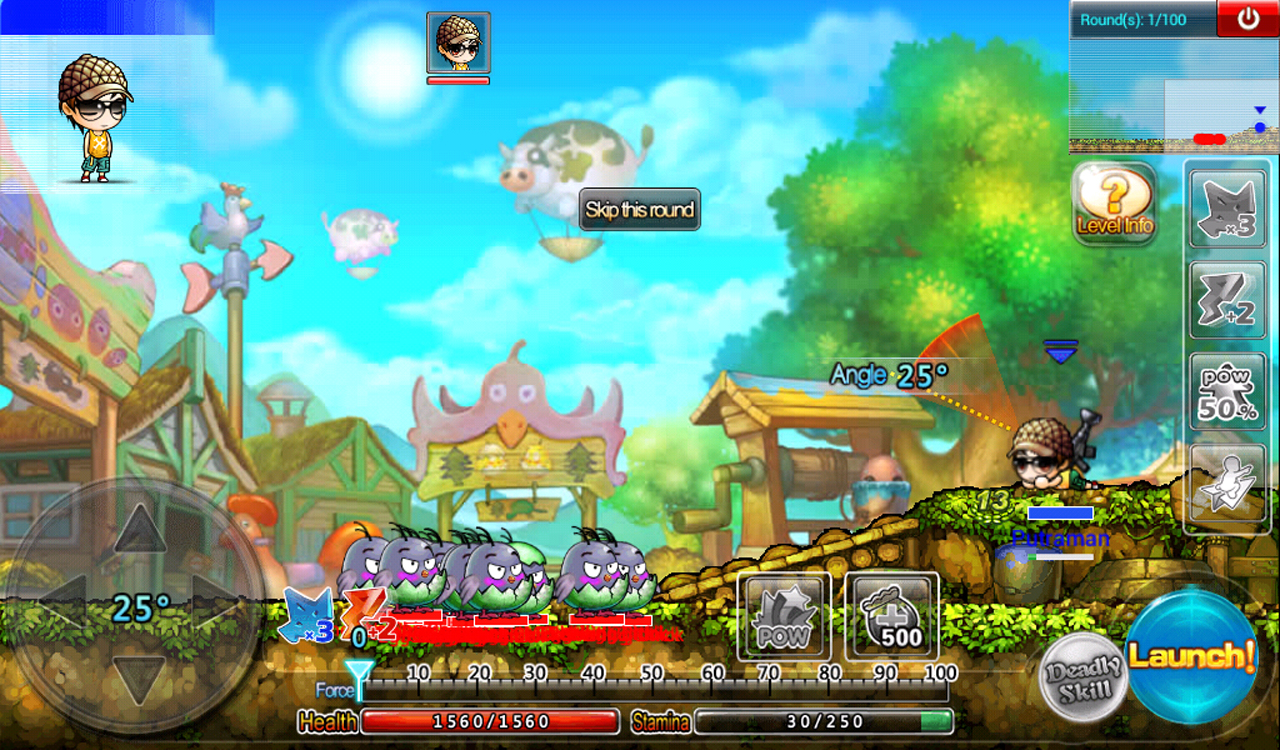 When DDTank mobile launched it seemed to me like a reimagining of Gunbound. After sinking enough hours into the game it’s clear that the comparison is right on target, except they’ve compromised on production values for the sake of more content.

For those who’ve never played Gunbound, imagine an artillery game such as Worms given the full South Korean casual game treatment. From cute and bright 2D art to a strong emphasis on avatar customization, it has everything to appeal to the younger gaming crowd. It’s pretty good too, with some fantastic character designs, an original combat system, and a fairly high skill ceiling.

DDTank doesn’t quite live up to that but it works. It starts with a set of tutorial missions and grants newcomers a trajectory guide up until level 13, by which point players will have to figure out distance, angle, and power by themselves. A stamina bar is shared between movement and shot modifiers – increased damage, higher critical chance, and scattered missiles – to inject some tactical variety, and there’s also a rage bar that slowly fills up for the inevitable super saiyan shot. As expected, landing a hit on the first turn feels insanely satisfying, and a single miss can mean the difference between victory or defeat.

Furthermore, items can be equipped to either restore health, grant stealth, fire off a teleporter, or freeze enemies, among other things. On top of that, weapons and accessories each have their own bonuses, all of which can be upgraded via enhancing (a base level upgrade) and synthesizing (boost specific statistics). Game modes can be categorised into solo or co-op modes against either AI mobs or other players.

So far so good. You see, the problems in DDTank only creep up once the honeymoon period ends. I mentioned earlier how the game sacrifices production values – while the lack of polish is obvious from the start, it only really gnaws at you after several hours. The sound library is awful, especially the long rewards jingle, and the user interface isn’t the most visually pleasing. These problems, while small on their own, work together to mar the overall experience; when mobile games in general are getting better that’s pretty hard to overlook. I’d also like to point out that early in the game you’ll run into a matron chicken repeatedly threatening to “pollute” you.

The single-player Dungeon missions are fairly repetitive but are made up for with some interesting bosses. Most are simply a matter of surviving and whittling down health bars though some do have fun attack patterns. For example, another early boss forces you to freeze them at the right time or face instant death, living up to the Dungeon classification.

A final point I have to raise has to do with its cash shop – you can buy or rent weapons. A certain level of skill is still required to succeed and these weapons don’t impact the game too much, but just know that the option exists. There are lots of ways to spend real money in-game considering how much they much push for coin recharges (this is actually a quest) and their VIP service so, honestly, they could have gone without it. There’s a diverse community in-game thus matchmaking should be a breeze for anyone interested. This being a Southeast Asia server do expect a mishmash of languages served up. That said, communication isn’t vital for public games and emotes convey certain thoughts well enough. Otherwise, there are guilds for those looking to invest more time into the game.

DDTank is available for download on the App Store or Google Play.

Ade thinks there's nothing quite like a good game and a snug headcrab. He grew up with HIDEO KOJIMA's Metal Gear Solid, lives for RPGs, and is waiting for light guns to make their comeback.
Previous post Zangief Joins the Street Fighter V Roster
Next post Master of Orion: First Look Video