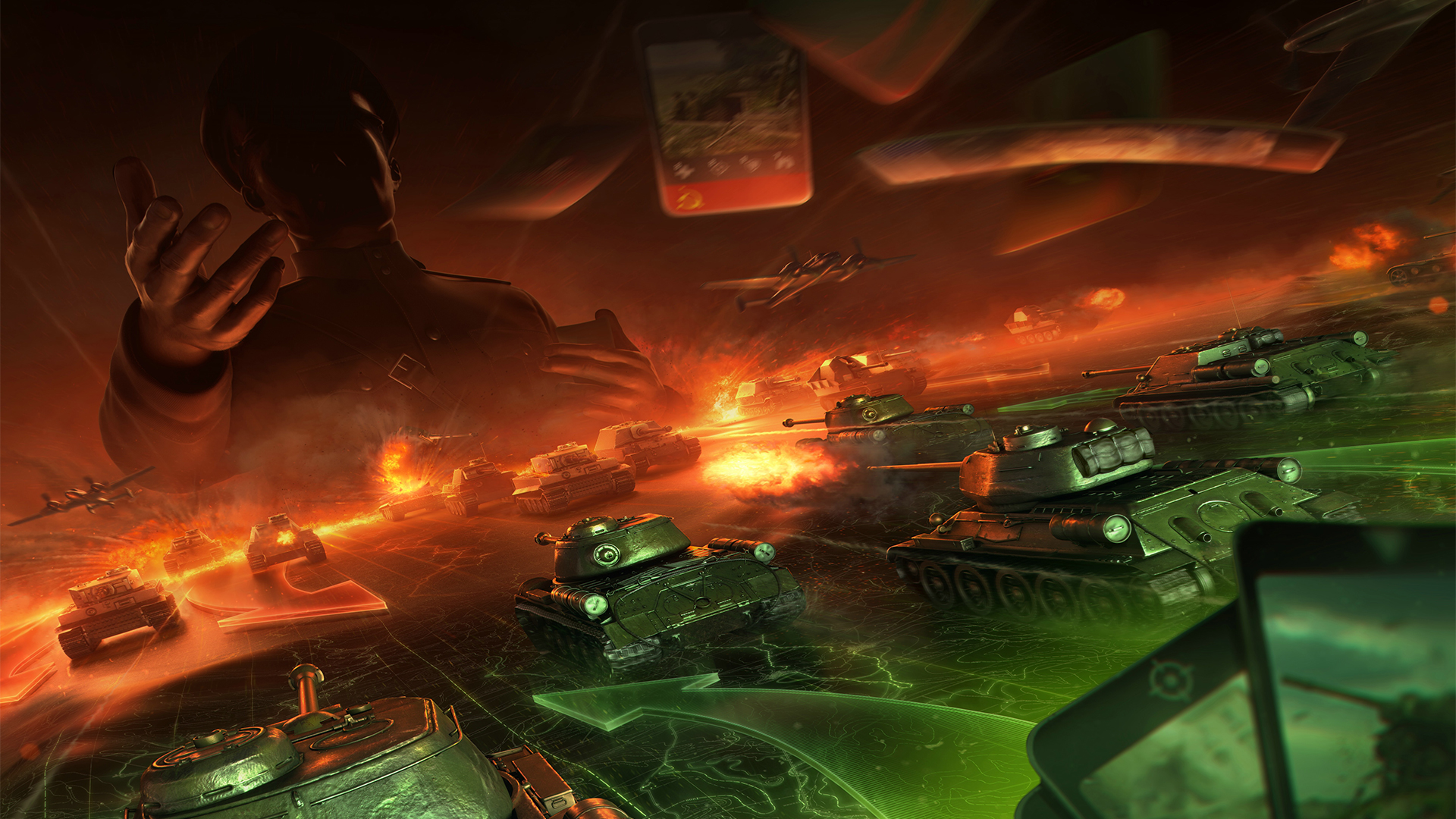 With its three pillars – World of Tanks, World of Warplanes, and World of Warships – now playable by the public in some form, the multi-million Wargaming machine has set its sights on alternative gaming platforms. They’ve broken the mobile wall with World of Tanks Blitz, a light adaptation of their flagship product, and now look to do the same to browsers with World of Tanks Generals. Except this time, it’s a card game.

It’s a smart choice. A card game wouldn’t cannibalize player numbers from either WoT or Blitz, offering instead a supplementary experience for current players. By that same token, any newcomers drawn in via Generals may potentially turn into WoT customers (a pairing with much more sense than, say, a match-three and a shooter).

Still, Generals is a little late in entering the card game space and has to now contend against a prolific Hearthstone, which has already released significant content updates. Luckily, there’s a key difference between the two: positioning.

In Generals the board is a field of 5×4 tiles, with each player’s headquarters set in opposing corners. Tanks can only enter play through the bridgehead, which are the three tiles surrounding their HQ. Through tactics and luck of the draw, players will have to maneuver their forces into ideal positions to fight, advance, and ultimately destroy the enemy HQ.

A deck is loosely broken up into three types of cards: Tanks, Orders, and Support. Tanks are further categorized into their five different classes, Orders are essentially action cards with varying effects, and Support are passive cards that remain in play for a set number of turns. These are core card game concepts so you can probably tell what their Hearthstone equivalents are.

The different tank types play just as expected. For example, Lights move an extra tile, Tank Destroyers always shoot first, and self-propelled guns boast infinite range as long as there are eyes on target. For the first time in a World of Tanks-branded game, I actually get to see all the vehicles used in the manner they were built for.

To incentivize keeping tanks alive, some of them provide a resource bonus. The HQ only generates four resources per turn, so one has to field more tanks in order to bring out the expensive toys. Contradictory as that sounds, it works nicely in the game’s favor. It’s this combination of tank variety, map size, and vulnerable resources that makes Generals feel like such a tactically rewarding game.

When it comes to deck-building we’re greeted with the familiar tech-tree, where new cards are unlocked using acquired experience and then purchased with in-game money. This removes the notion of card packs entirely and makes deck-building fairly linear – easier for the matchmaker to find an equal opponent but a little too predictable for my tastes. In fact, this is one concern I have for Generals: that game-changing cards are acquired through long and tedious grinds rather than dropping out of the blue. Honestly, the latter makes for exciting news to share and does wonders for motivation.

My greatest gripe, however, lies with an out-of-place World of Tanks feature: repairs after each battle. I see absolutely no good reason for keeping it around, and all it does is prevent players from using their stronger cards more often. Balance isn’t an issue here since we already have the tech-tree. If anything, all this will do is hurt player experimentation – as competent as the training grounds AI is, nothing beats real-world testing. And in a card game, experimentation is everything.

It’s a good thing then that we’re still in closed beta. Frankly I don’t expect repairs to go away as premium accounts – which increase what you earn per match – make for steady income. What we can hope for is that Wargaming tweaks the relevant values into something reasonable.

I didn’t dwell too much on the gameplay because finding an opponent was nigh on impossible, with my actual battle count standing at a grand total of “one” after several days (and even that took about fifteen minutes of waiting). Hence, I can’t say for certain how fast progression is since I’m not earning experience. Nonetheless, spamming AI battles with different decks and tactics gave me enough perspective to form my impressions.

Card games are all about the moment-to-moment gameplay and World of Tanks: Generals offers plenty in that regard. It adheres to basic ideas well enough to feel second-nature, and the novelty of its battle system will certainly court attention. The real question is whether everyone would still be playing long after release, and that responsibility largely falls to the gameplay outside of battle, the very parts I’m troubled with. Whatever Wargaming’s decision, though, I know I’ll be back and playing come launch day.

World of Tanks Generals is for browsers and mobile devices. Apply for the closed beta here.

Ade thinks there's nothing quite like a good game and a snug headcrab. He grew up with HIDEO KOJIMA's Metal Gear Solid, lives for RPGs, and is waiting for light guns to make their comeback.
Previous post Windows Usernames Stopping Some From Playing GTA V
Next post Hearthstone Now on Mobile, Get a Free Classic Pack