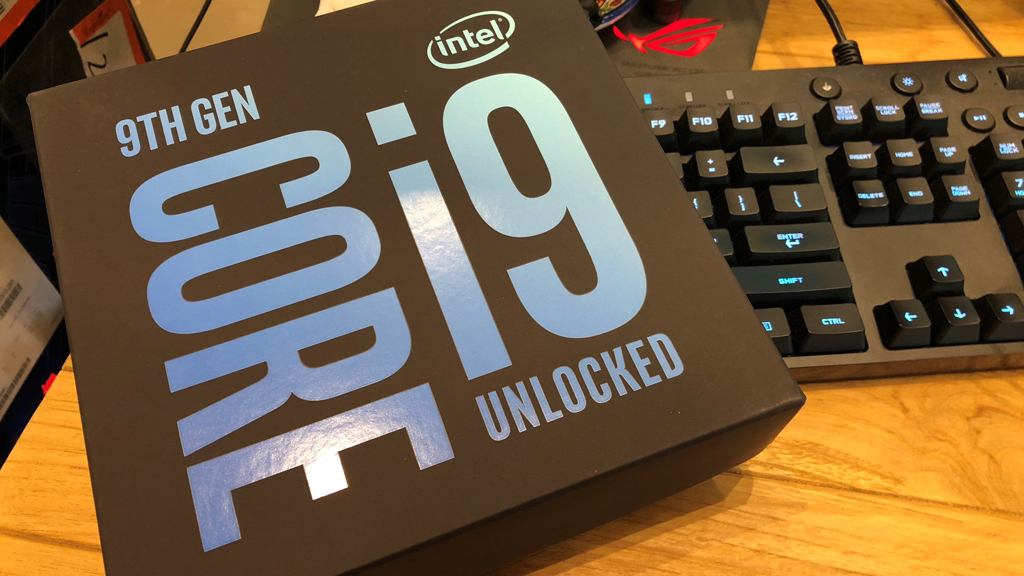 It took nearly two years, but the 9th-generation Intel Core i9-9900K (3.6GHz, 16MB L3 cache) is the best CPU for gaming by the chip-maker yet, thanks to its relatively high clock speeds and monolithic 8-core / 16-thread design with additional cache. Crucially, it is also Intel’s good answer to AMD’s octa-core mainstream processor. Ryzen has shaken up the processor market, in a good way, and Intel could not simply rest on its laurels.

But while having more cores isn’t necessarily better for gaming – quite the opposite in fact, because of the generally lower clock speeds – Intel is claiming to offer the best of both worlds, serving up a chip that can satisfy both gamers and content creators. The best part is that this isn’t even a prohibitively expensive enthusiast part. It’s not cheap, to be sure, but it’s still part of Intel’s mainstream line-up, which puts it within range of a reasonably wide audience. 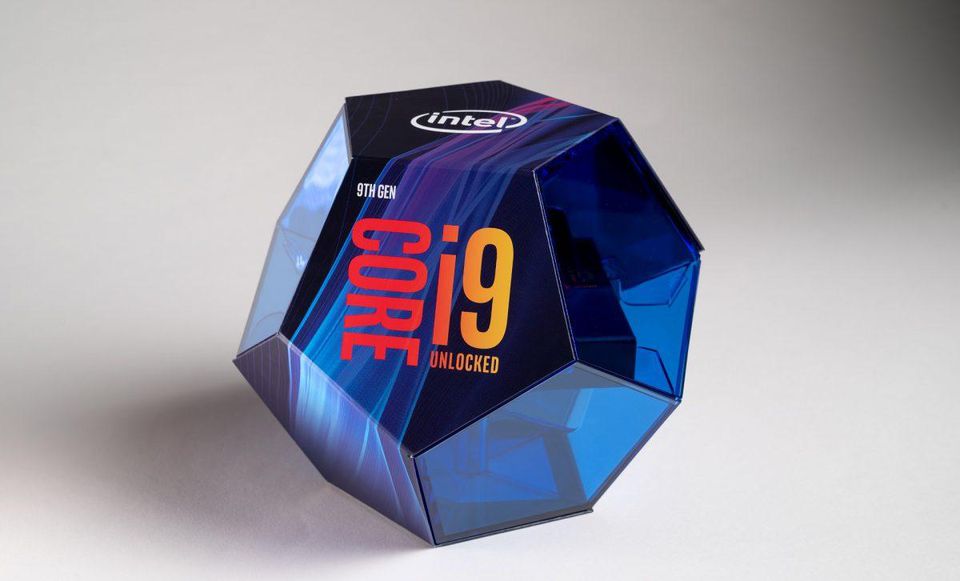 The Core i9-9900K is based on the 14nm++ process, where the plus signs signify a more refined process that lets Intel cram more cores with similar frequencies into the same power envelope. The good news is that this approach seems to be bearing fruit and fine tuning a process can produce some nice, tangible results.

With a Turbo Boost 2.0 frequency of up to 5.0GHz for a single core, and 4.7GHz for six to eight cores, the Core i9-9900K promises delicious performance in games, which still tend to be more sensitive to clock speeds. Furthermore, it’s done all this in the same 95W thermal envelope as the Coffee Lake CPUs before it.

No need for a new motherboard

Here’s the good news. If you already own a Z370 chipset motherboard, there’s no need to switch to the newer Z390 motherboards. You do have to check with your motherboard brand for a BIOS update though, and should one be available you’ll have to do the BIOS update before switching to the new 9th-gen processor.

The Z390 chipset does add a couple of features, though, namely integrated 802.11ac WiFi and USB 3.1 Gen 2 support, but apart from that there’s little reason to upgrade.

The configurations of the test setups we used for the different processors are listed below. I’ve compared it against the Ryzen 2700X, its direct competitor from AMD. On Intel’s end, I’ve included the Core i7-8086K, which is basically a Core i7-8700K with higher base and boost clocks. 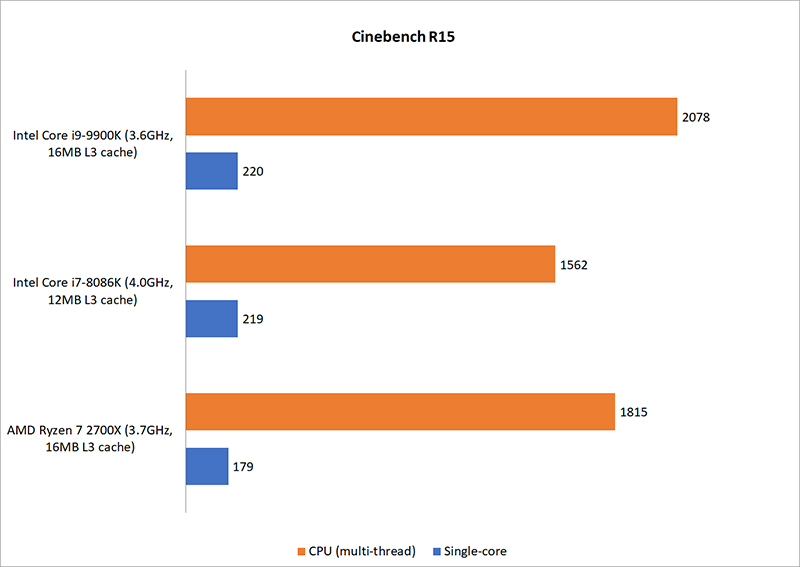 Cinebench R15 utilizes up to 256 threads to evaluate a processor’s performance in a photorealistic 3D rendering. 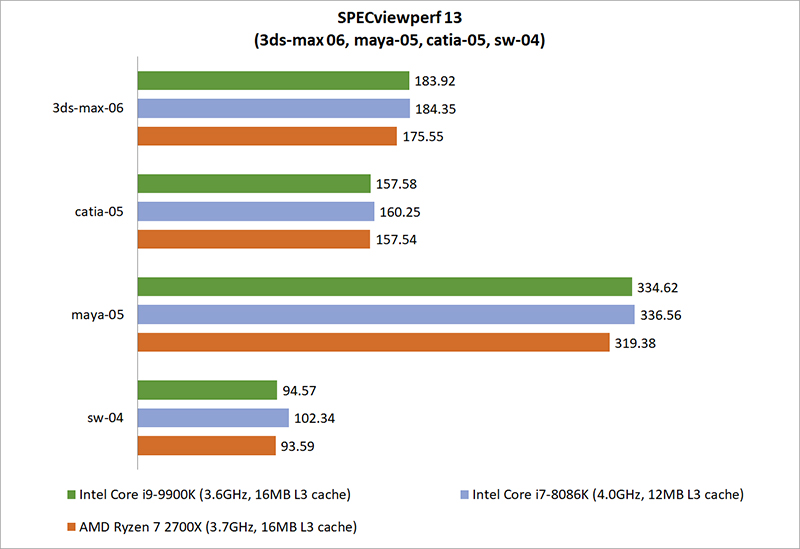 SPECviewperf is used to assess the 3D graphics performance of systems in professional applications. Each individual workload, called a viewset, represents graphics and content from an actual real-world application. SPECviewperf actually runs a total of eight different viewsets, but we’ve picked the four which have the greatest performance variation across CPUs display here.

There doesn’t seem to be much of a benefit from high core counts here. In fact, the Core i7-8086K came ahead of the Core i9-9900K, probably owing to its higher 4.0GHz base clock. 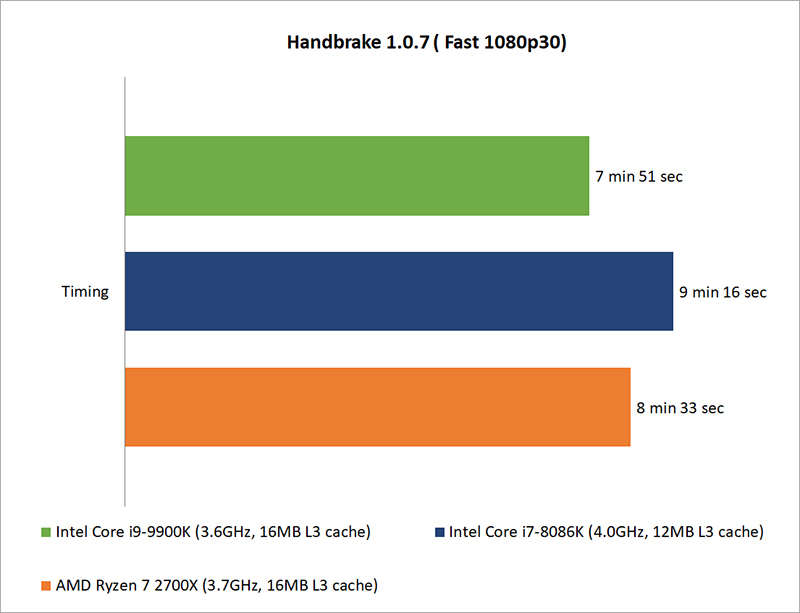 Handbrake is a video transcoder that converts videos into a format for use on PCs and portable electronic devices, and is a good indicator of a processor’s video encoding capabilities. YouTube content creators, Twitch streamers, and other video creators will be most interested in this performance metric.

The Core i9-9900K reclaimed its lead here, and it sure looks like it’s going to be a very competitive chip for those who want to game and stream at the same time.

Our benchmarking is still ongoing, but the Core i9-9900K performed very well in our first round of tests. The combination of Intel’s latest microarchitecture and Turbo Boost frequencies of up to 5GHz, resulted in the best single-threaded performance we have seen from a desktop processor to date. The Core i9-9900K’s 8-cores and 16-threads, larger cache, and higher clocks also resulted in some excellent multi-threaded scores.

The results above offer a peek at just a slice of the Core i9-9900K’s performance, but it so far looks very impressive. It’s often that you see single-core performance dropping when you add more cores, but the Core i9-9900K is so far keeping pace with the Core i7-8086K, which is one of the highest clocked chips Intel has offered to date.

That’s good news for both gamers and content creators aka streamers – as the Intel Core i9-9900K’s clock speed and multi-threaded performance puts it ahead of any mainstream consumer processors before it.

In our second part of this long-term review, we will look at some real world benchmark results.

Squee delights in trash talking on Overwatch and sleeping till 5pm on weekends. Few other things matter, except perhaps the next episode of Game of Thrones.
Previous post Daylight Studios announces Holy Potatoes! A Spy Story?! for PC and Mac
Next post The GameAxis Playlist (November 2018): PC