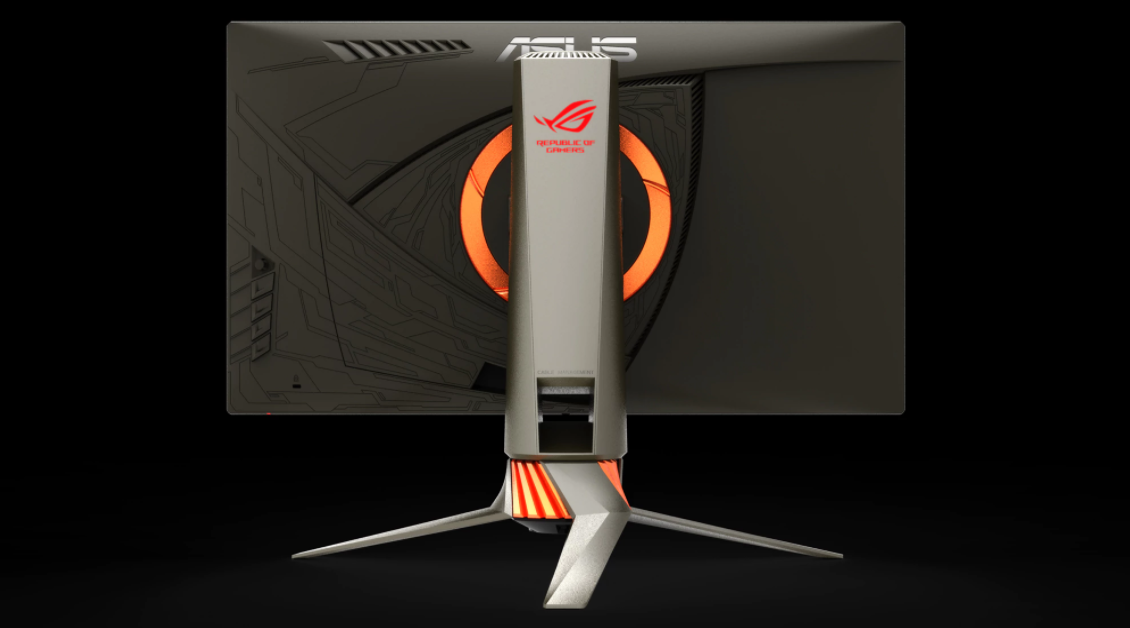 ASUS are pushing limits once again, this time in the realm of gaming monitors. The 24.5-inch ASUS ROG Swift PG258Q is, at its core, a proud speed demon. A direct upgrade from its predecessor, this 1920 x 1080 TN panel now boasts a dreamy refresh rate of 240Hz paired to a 1-milisecond response rate, on top of NVIDIA G-Sync support. This is a monitor born and bred purely for gaming, and while it does so spectacularly it’s also no slouch when it comes to everyday tasks.

Understandably, that Full HD resolution may already leave some readers hesitant. A 2560 x 1440 monitor is more or less the expectation these days, not only for the increased real estate but also for the pixel pitch and quality – moving back to 1080 is a “downgrade” you’ll feel keenly.

But here’s the thing: the PG258Q is targeted at a highly specific audience, the kind that tends to be specific. It’s a dream come true for fast-paced esports such as Counter-Strike: Global Offensive, eliminating any traces of motion blur or ghosting for pixel-perfect precision. In Testufo’s Chase Squares test, for example, both rectangles remained in such sharp detail that I managed to lower the distance value all the way to zero. It’s hard to appreciate this feat in practice given how games occupy our full attention, but find a quiet in-game corner to observe some moving elements — a patrolling AI enemy, a swaying leaf — and you’ll be impressed at how clear it all is.

That clarity has its use in daily activities as mundane as web browsing too. Scrolling through long pages of text, be it PDF documents, news articles, or comment threads, allowed me to speed read without any blur-induced headaches. It’s an awfully specific scenario, true, but if scanning huge swathes of digital text are something you do on a regular basis then the PG258Q may prove handy.

If there was any doubt over its first-person-shooter leanings then perhaps the on-board crosshair overlay function would convince you, offering complete control over size, color, and positioning. It’s accompanied by other universal features such as an FPS counter and timer, should you require those things. Of greater interest are the variety of preset color profiles that are available to play with, including an 100% sRGB mode and custom saved settings. The panel sits at 72% NTSC so the overall image presentation is nice, at least for entertainment, although there is a noticeable color shift when viewing the screen from a higher angle. While creative work is possible, the limited resolution will likely prove the bigger setback.

Digging around in the menus reveals a few other noteworthy items, beginning with varying levels of a blue-light filter to save your eyes from long screen-staring sessions — it won’t replace an actual break but it certainly helps. This is where you’ll also get to tweak what ASUS calls the Light Signature, which is a downward projecting red light that paints the ROG symbol onto your desk. Gimmicky for sure, but thankfully they’ve included three extra blank covers for you to customize. It may be as simple as using a marker or pasting a decal, just as long as it blocks out the light appropriately. 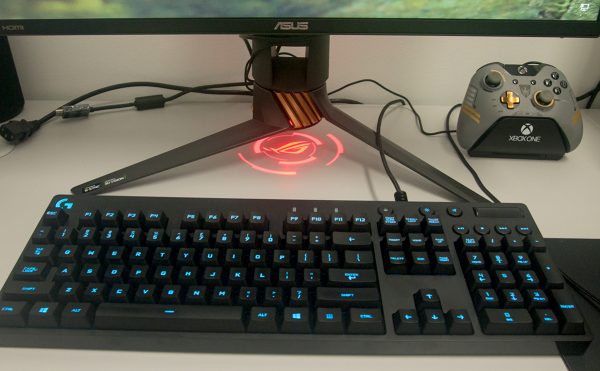 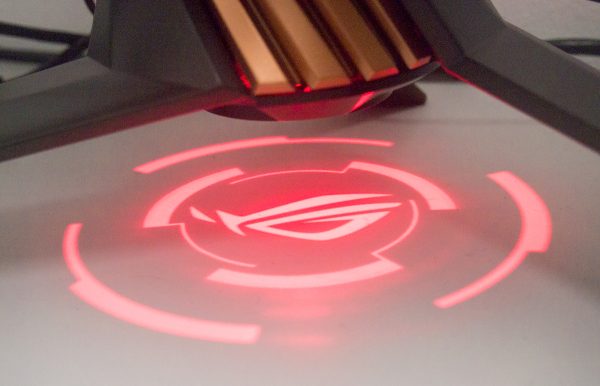 You’ll notice that the PG258Q uses a three-legged stand, which is arguably the worst change ASUS has implemented. It’s to better highlight the Light Signature, of course, yet what it also ends up doing is to take up precious desk space at the back. Aside from having the monitor closer than what you may like, this also means you have less space at the front for keyboards and whatever else. This can be circumvented via VESA mounting but not everybody can or wants to go down that route.

It’s quite a shame really, as there’s plenty to like with the rest of the monitor’s design. The super thin bezels ensures we get as much usuable screen out of the monitor’s 24.5 inches, while a combination of hardware buttons and a joystick make navigating the menus a breeze. The biggest plus point is a removable panel that partially conceals the tangle of cables, giving ASUS’ trademark Mayan pattern free reign across the rear. 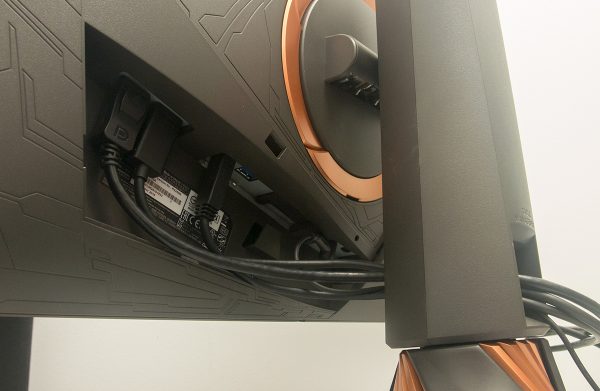 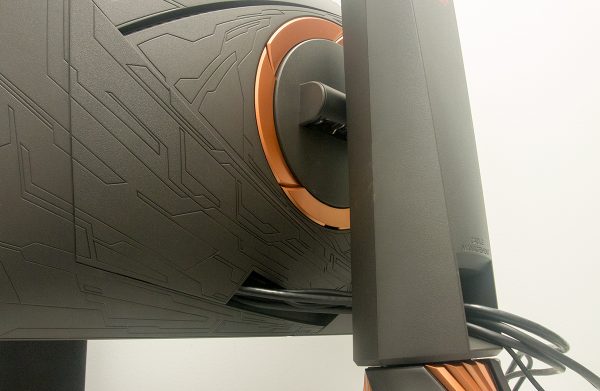 As for what cables you’ll get to plug in, there’s the all-important DisplayPort 1.2 (necessary to go above 60Hz), a single HDMI 1.4 port, and… well, that’s all there is really. Accompanying those two are a lonely pair of USB 3.0 ports. At this point I have to remind myself that the PG258Q is meant for esports, although a few other input options surely wouldn’t hurt in making it more appealing to the general gaming crowd.

Which leads me to dwell on the asking price of $1,059. On the one hand, this is a specialized monitor with a singular purpose — to deliver the best competitive FPS experience to ever grace our eyes. If you ever want to use it for something else, however, then you may find yourself questioning the purchase. That’s not to say that watching Netflix or working with it is awful, as the PG258Q handles itself pretty well in those regards. It’s simply the fact that you can aim for something a little more versatile at that price bracket, say a larger screen or an IPS panel, and versatile is what computers need to be for the vast majority of us.

If you’re a competitive gamer who makes first-person-shooters your bread and butter then the ASUS ROG Swift PG258Q is, hands down, a monitor you have to see for yourself. For the rest of us, it’s an impressive monitor that’s nice to have, the kind that’s fun to fantasize or drool over, but ultimately one that won’t top shopping lists.

Ade thinks there's nothing quite like a good game and a snug headcrab. He grew up with HIDEO KOJIMA's Metal Gear Solid, lives for RPGs, and is waiting for light guns to make their comeback.
Previous post Sales Report – How is your favorite Gaming Console performing?
Next post E3 2017: What games do you hope to see?