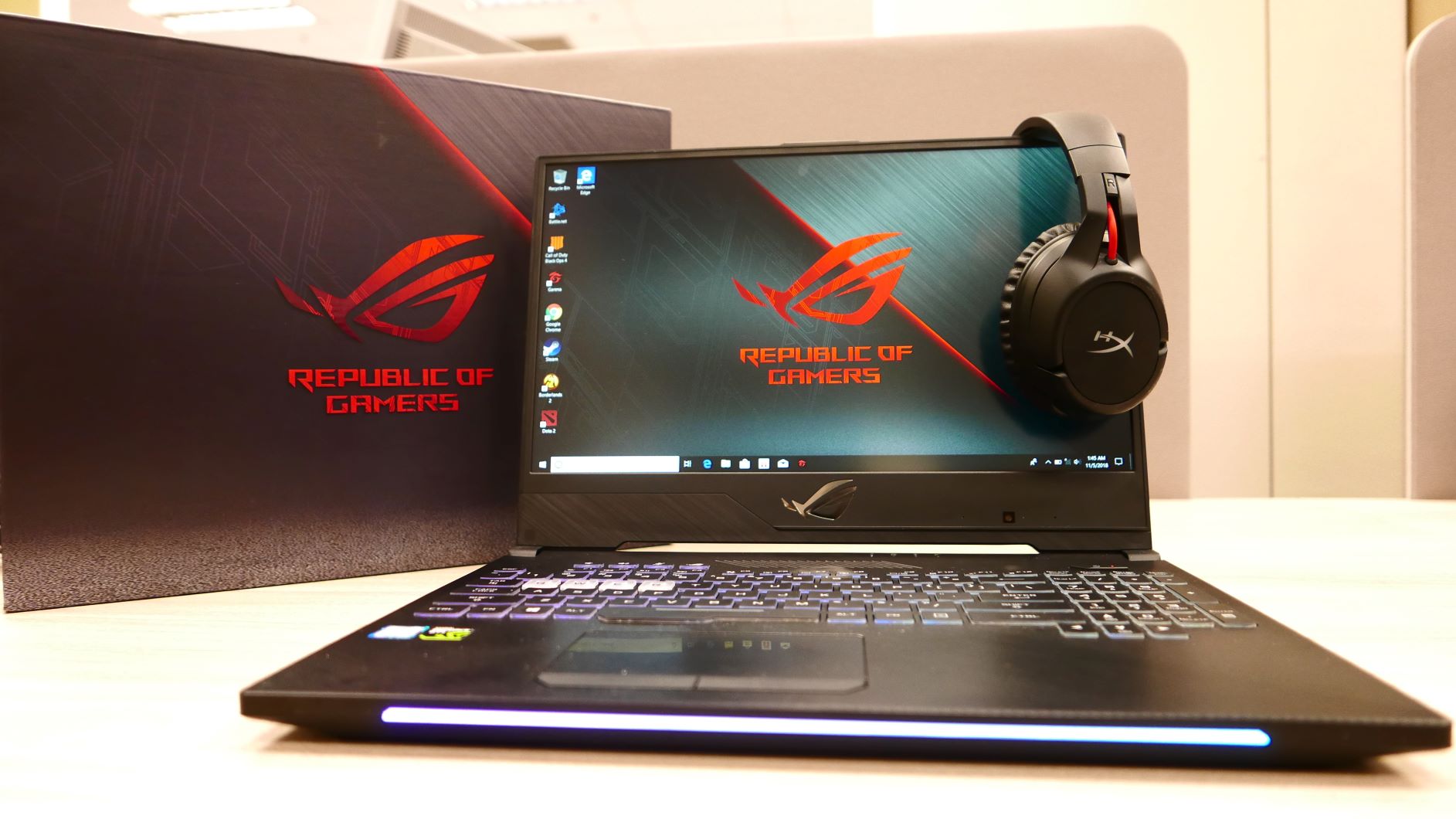 Most things can be described with words. But I felt that the performance of the ASUS ROG Strix: Hero Edition is best summed up with this GIF from the first Men in Black movie.

Indeed, the Hero packs a ton of firepower within its demure frame. Comparatively more compact than its immediate counterparts, the Strix Hero is a nice, little gem that should fit snugly inside any gamer’s backpack.

In fact, I’d say it’s one of the most value-for-money gaming laptops you can get off the shelf, outclassing its mid-tier, similar-specced competitors like the Predator Helios 300 and Lenovo Legion Y720. That being said, the Hero isn’t flawless, which I’ll delve into later. For now, let’s have a look at our review model. 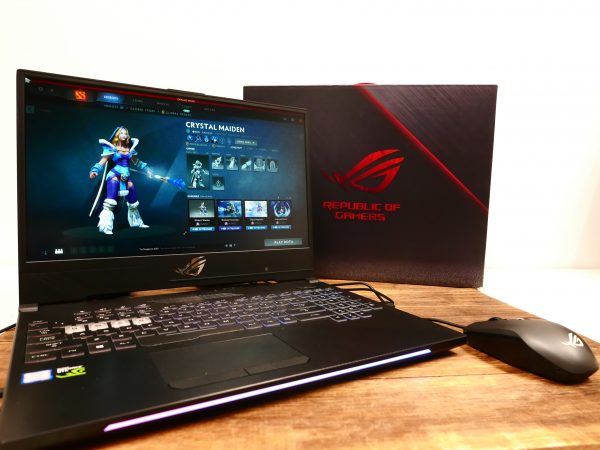 Let’s take a look at the design

Weighing in at a mere 2.5kg with a closed thickness of 2.4cm, the Hero is sleek, lightweight and doesn’t make you think you’re handling an elephant. For a 15.6-inch laptop, it certainly doesn’t look like one, since the thin bezels help to make the computer seem a lot smaller than it actually is. Worlds ahead of both the Helios 300’s 2.8cm thickness and the Legion Y720’s 3.2kg weight, the Hero certainly doesn’t leave much room for argument in terms of portability.

On the outside, the Hero sports a brushed black cover with a diagonal slash through lengthways. This is a silent nod to it’s supposed niche: Multiplayer Online Battle Arenas, or MOBA for short. While I do appreciate the simplicity of the design: a ROG logo, titling and a LED bar beneath the bottom bezel, it lacks a true “badass” gamer feel of something like a Predator or Alienware.

Flipping open the cover reveals a nicely spaced chiclet keyboard with transparent QWER keys, which are usually assigned to in-game MOBA abilities. The keys also feature a subtle 0.25mm-deep keycap curve for split-second responses. At the top are 4 shortcut keys for volume/microphone control as well as easy access to the ROG Gaming Centre app. It’s a pre-installed program that allows you to monitor computer usage and/or customise different performance profiles for various games.

As for the trackpad, although reasonably sized and positioned, admittedly gamers might not use it that much, since we usually prefer dedicated gaming mice for the job. Nevertheless, it should be sufficient for on-the-fly Internet browsing and other ad-hoc scrolling purposes.

Wrist space in particular is great compared to other mid-tier laptops. Specifically, the space allocation was much more generous than that of the Predator Helios. When I play or do anything on the Helios, I find that my wrist joint ends up resting on the edge of the bottom bezel. That can get really uncomfortable and/or painful, especially if I’m doing stuff for extended periods, like writing this review.

Fortunately, with the Hero, I can rest my arms easily halfway to my elbow, which makes for a sturdy, supported position. It’s something to take note of if you intend to use the Hero for daily computer work.

Last but not least, the Hero’s I/O ports. I guess it’s a rather generic checklist: USB ports, 3.5mm audio jack, SD card reader, HDMI, Ethernet, all the essentials. However, what I like is the fact that they’re all on the left side, with the exception of the SD card reader and one USB port on the right.  This is great as it stops your mouse hand brushing against a tangle of cables, especially in a MOBA where 90% of the game relies on mouse movement. 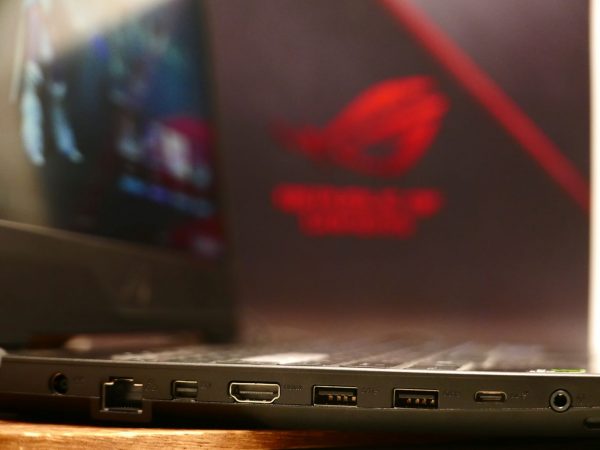 So how cool will my games look?

The Hero comes with a standard issue NVIDIA GeForce GTX1060 graphics card, the same as the Helios and the Legion. I didn’t think much about it, since it’s not something overly unique or powerful. That being said, the GTX1060 is still capable of running beefy material like Black Ops 4 at high quality without a hitch.

Next up is the screen. Instead of the usual 60Hz screens installed on the Helios and Lenovo, the Hero goes all in with its full HD screen sporting a whopping 120Hz refresh rate! Most high-end screens run at 144Hz, but considering that the Hero is a laptop, I’d say that a 120Hz screen is already much-appreciated overkill.

I chose three games for the review, two of them being MOBAs so as to fully assess the Hero’s supposed niche: League of Legends, Dota 2 and Black Ops 4. Tuning up the graphics to maximum on all three games made me feel like I was watching a movie rather than playing a game. Everything from character outlines to environmental shading was rendered beautifully. Animations looked fluid and natural.

On a side note, the immersive feel of the Hero’s screen and graphic rendering might appeal to those who enjoy watching wildlife and travel programmes.

Additionally, although the Hero is said to be tailored for MOBAs, I didn’t feel that there was anything supposedly special about playing LoL or Dota on the Hero as compared to my own Helios. Sure, graphics are excellent and gameplay is near-flawless but there’s nothing that really says it’s made for MOBAs apart from the transparent QWER keys. It’s simple logic. If the Hero runs every genre equally well then there isn’t anything truly outstanding about the MOBA experience. 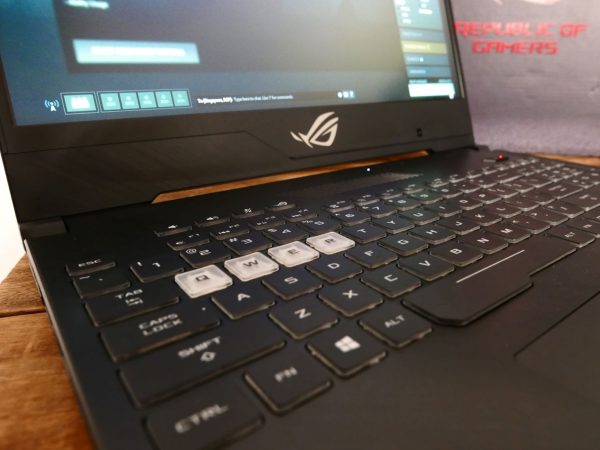 But then again, that shouldn’t downplay the Hero ‘s overall excellence in any of the test games, especially the super-demanding Black Ops 4. If I can make out every line on Ajax’s shield while hip firing my machine pistol and checking my mini-map simultaneously, that means something. It means I’m good at multi-tasking the Hero is innately powerful enough to handle desktop-level loads without flinching. Mhm.

Can the laptop stay frosty?

Standard mid-tier laptop fans have a 5V rating. The Hero sports 12V fans. Therefore immense loads shouldn’t pose that much of a challenge, but I’m a little on the fence here. It’s an issue of necessity versus annoyance.

While the fans easily kept the computer cool when running LoL at max graphics, the surface admittedly did get rather hot on Black Ops 4, averaging about 70-ish degrees Celsius after eight to nine consecutive multiplayer matches. And perhaps the most surprising tidbit: if the Hero was experiencing thermal throttling at all, it did a good job of hiding it. The games ran as smoothly and quickly as expected, even with the aforementioned GPU temperature. Consistency, check!

However, critics might say that the 12V fans aren’t exactly that powerful since demanding material still causes a 70-degree GPU temp. But for comparison purposes, my Predator Helios 300’s GPU measured a face-melting 82 degrees Celsius after the same amount of play on Black Ops 4. That was with a set of 5V fans.

Suddenly, 70 degrees Celsius doesn’t sound so bad to me.

The main reason I’m not wholly supportive is because of the immense noise generated by the fans. On LoL and Dota 2 the noise was already loud and distinct, but still within tolerable levels. On Black Ops 4, hmm…I was afraid the neighbours would start thinking I had renovation works going on.

Jokes aside, it’s loud when the load is taxing, and even when I was just watching corgi videos on YouTube the whirring is distinct. As annoying as that might be for some people (myself included), it’s more of a cosmetic issue and easily solvable by plugging in a comfy pair of headphones. 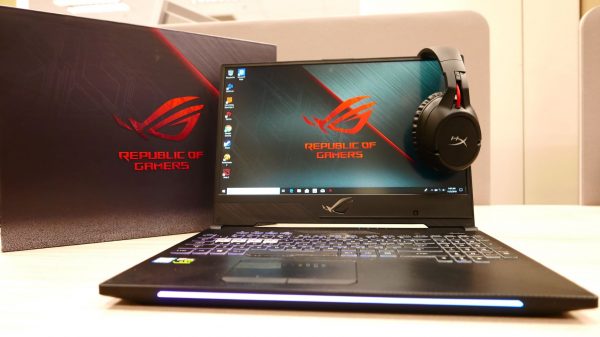 How long can the Hero last?

With all the high-performance accessories built into this little gem, you’d be forgiven for thinking the Hero loses out on battery life. Not necessarily. The laptop lasted just under four hours unplugged with continuous Internet use at 100% brightness.

Comparatively, the Helios does about three hours while the Legion Y720 one-ups the Hero at about six-and-a-half hours, under the same settings. So, the Hero lies in the middle of the pack here, but honestly, I don’t expect to be very far away from a power outlet when gaming.

Last but not least, some minor cosmetic issues.

What I’ve decided to list here are more of cosmetic gripes that some gamers might have about the laptop. Most notably the fact that the arrow keys are unbelievably tiny. Truth be told, they might as well not be there. Granted, it’s rather unimportant considering that most games use the mouse, WASD or QWER conventions nowadays. You might have some issues if you want to play Boxhead 2Play on Y8, but apart from that I don’t think it’s really significant.

Second, the webcam is at the bottom of the screen, which is a rather awkward location unless you don’t mind people admiring your chin on Skype. Regardless, like the tiny arrow keys, it’s more of a cosmetic inconvenience.

So, what’s the verdict?

At the end of the testing sessions and prior to writing this review I had already come to a very sound conclusion: I wish I could buy this. It’s a laptop that can handle almost everything a desktop can. Who wouldn’t want that from a notebook?

On a more serious note, I feel the Hero is a great value pick for casual and hardcore gamers alike who don’t want to fork out excessive wads of cash for a gaming setup. 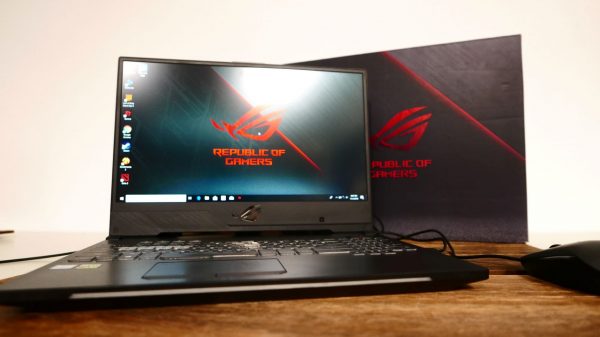 I mean, for S$2,700, which is only slightly more than what I paid for my Predator Helios a year back, you get near desktop-level processing power, performance and graphics, while still retaining the lightweight portability of a laptop. I would have appreciated a bit more flashiness on the cover though, but that’s just me.

So, apart from some questionably-sized keys, loud fans and the occasional heat issue, I’d say the Hero is still a solid long-term option, for both gaming and general use.

Kenneth is your dedicated jack of all trades gamer and borderline anime nut. When not writing, he likes to wind down with Overwatch, Apex Legends and a bit of Fate: Grand Order on the side.
Previous post Working in Ubisoft Singapore: On family, job perks, and opportunities
Next post The Humble Warhammer Bundle is anything but “humble”