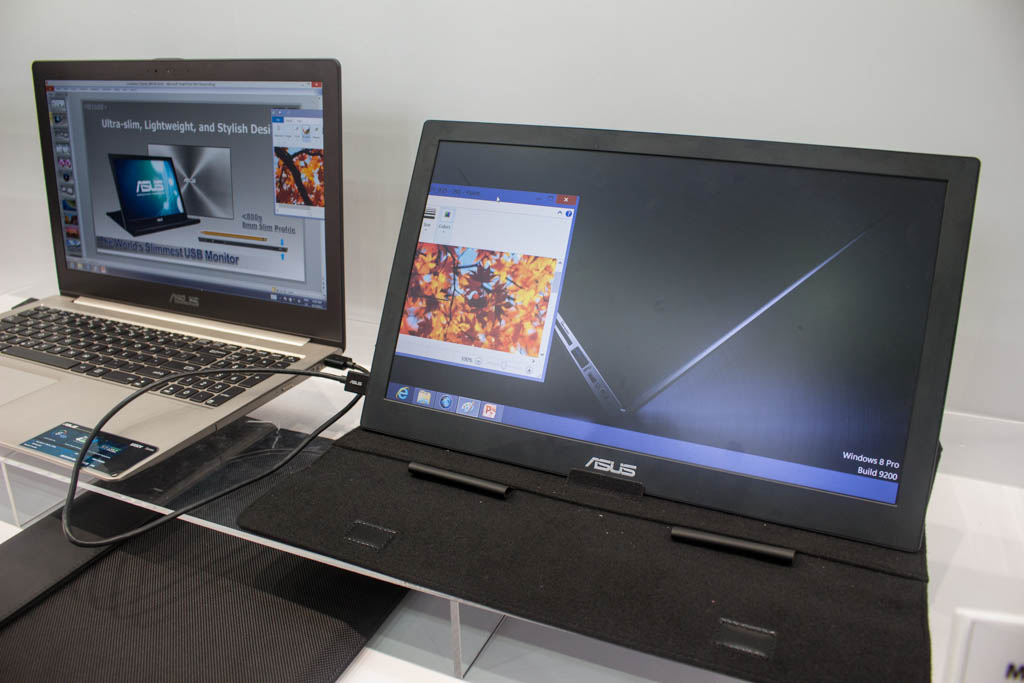 USB monitors such as the Asus MB168B+ haven’t, up to now, had the best of times. Generally saddled with poor resolutions, and lacking the hardware required to do justice to smooth movies and fast-changing games, they’ve remained niche products. That’s a shame, as USB screens have plenty of potential. Mobile executives could use them as an easy way of adding screen space to a cramped laptop.

Users needing to occasionally stretch the resolution in order to squeeze in additional windows, or play a game to its fullest, will appreciate having a convenient screen that can be temporarily but easily set up – saving them from having to keep a heavy-duty second monitor camped permanently on their desk. With such applications open to it, the USB screen is an idea whose time may yet come. Indeed, it might just have arrived, with the 15.6-inch Asus MB168B+ boasting high performance, and a resolution that can stretch right up to 1920×1080.

The Asus MB168B+ is stunningly light. With very little frame, and weighing 0.8kg in all (2kg when in its case), it can be whipped out in a second. Its sleek looks and lack of bulk make it an item you’ll love to twist and turn around. The Asus comes with a handy Smart Case, and the top surface of this case then folds out to provide a soft felt stand for the screen.

We were initially sceptical about the wisdom of this arrangement, but it proves more stable than you might think, and we had no problems with the panel slipping out of place. You have a choice of positioning it either at an angle, or bolt upright. Admittedly, it would be nice to have slightly more precision to the tilt capabilities, but overall, the carry-case/stand hybrid works well.

One word of warning. The nature of the case/stand means that the whole setup does consume a fair amount of deskspace. If the idea is that you want the MB168B+ to take up the minimum amount of space on your desk – the screen itself is, after all, incredibly shallow – then you would have to devise another means of standing it up.

It could be leant easily against a stack of books or wall. Assuming you were happy that it wouldn’t slip over, then you would still be faced with the dilemma of how to get it to stand at the right angle for optimum picture quality. It’s only a TN panel, but we found the viewing angles to be fairly good for a screen of this type. Even so, some ingenuity might be needed if you wish to do away with the case/stand.

Using the screen itself is very easy. It operates with DisplayLink. Install the software, and then just connect the monitor to your computer using the USB cable. You’ll need USB 3.0 for the smoothest results, although it can work on USB 2.0 ports as well. You don’t get the same level of performance here, but it’s still more than enough for office applications etc. It would be extremely easy to leave this screen on a nearby desk or bookcase, and then have it set up and working within seconds when needed. As an occasional second screen, then, it would work brilliantly.

The controls are simple enough, consisting of an on/off button and the brightness adjustment control. In fact, the screen will automatically adjust its brightness to suit the room conditions, but Asus has also given you the option of changing the settings yourself, just in case. Another nice touch is the screen’s auto rotate facility. You can stand the panel on its side, and it will automatically rotate the image so that you get the maximum number of lines running down the screen. It doesn’t feel amazingly stable in this mode – particularly if you have a heavy USB 3.0 cable hanging out of it – but it’s still a nice option to have.

Ultimately, though, the success of this screen will depend on how good it is as a viewing device. It is only a TN panel, so you don’t get a stunning colour palette. Nonetheless, the different shades offer snap, and the viewing angles are solid. It’s certainly no match for the likes of IPS etc. As a standard TN panel, though, it’s more than sufficient. The screen coating is matt, so you won’t be driven crazy by reflections.

In USB 3.0, the screen was able to handle full 1080p without any problems at all. The image was clear, and we were able to use the full extent of the panel. More critically, it has the grunt to work with video, and our HD movies were impeccably smooth. Sitting side by side with a standard flat-panel, the MB168B+ lost very little. Admittedly, the far reaches of HD does show up the slightly limited colour range of TN panels.

But compared to standalone TN screens, the MB18168B+ entails few compromises. It wasn’t quite as perfect in games. The stated reponse rate is only 11ms, and there were occasions in our fastest moving games when the graphics didn’t change quite as smoothly as on our standalone 4ms monitor. For the most part, though, it’ll be more than adequate, and only the most finnicky of gamers will really find it a problem.

Our conclusion is that the MB168B+ does have some of the limitations of TN panels, but it has virtually none of those associated with USB screens. It keeps the ease of setup, but adds fantastic 1080p support, and hardware that can make a superbly smooth job of HD movies, and that works fairly well with games too. Business and home users alike will find plenty to enjoy here. We might prefer a better quality panel, but in other respects, the MB168B+ is stunning, and must the best USB screen yet.

Aaron Yip is an industry veteran with more than 15 years of experience. When not spending time on his gaming PC and consoles, he can be found in Hyrule solving ungodly puzzles and collecting gems.
Previous post Razer Has An Android-Powered Game Box Coming To TVs Near You
Next post Destiny Beta Code (PlayStation 4) Lucky Draw