Gaming computers have looked to all corners of the world for their design inspirations, yet one company firmly sits among the extraterrestrial. Decked in sleek metallic grey and rubber black accents, the Alienware 17 R4 (AW17R4) cuts an impressive figure on any desk. It has to, for this 17-inch, 4.42kg laptop isn’t going anywhere – partly because you don’t want to lug this desktop replacement around, but mainly from the fact that this machine will cover most of one’s gaming needs.

Our test unit came equipped with an Intel Core i7-6700HQ and Nvidia GeForce GTX 1070, respectable hardware that can tackle both gaming and virtual reality (Alienware has since updated the CPU). Other core specifications include 16GB of DDR4 RAM, a 512GB Toshiba NVMe SSD, and a HGST 1TB HDD to provide just enough room for image and video editing work.

All that is packed in a large chassis lined with RGB lighting strips at either side, even running along the sides of the lid.  Depending on how you feel about your bling, these lights, along with the Alienware logo, keyboard, and touchpad, can all be customized as a set or individually as you see fit. Thanks to AlienFX integration the colors can even sync with compatible games, though it does feel hit-or-miss at times. While their placement isn’t distracting you may want to turn it down in shared spaces. 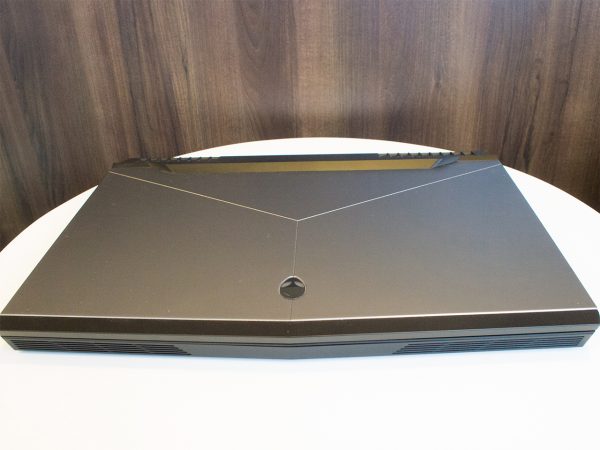 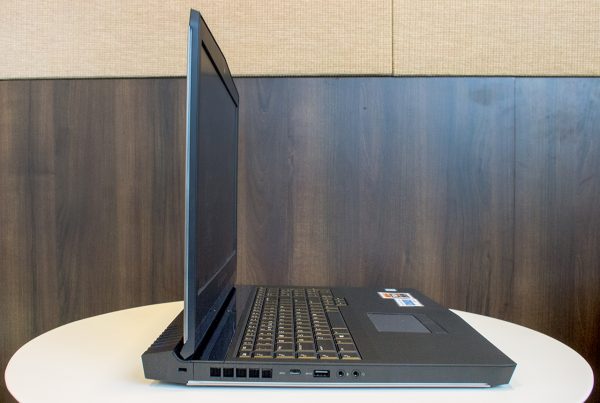 The chassis takes a sizeable chunk of desk space and that’s not counting the wide power adaptor. The AW17R4 measures 424mm wide and 332mm deep, with a height of 29.9mm while the lid is closed. Due to this, you’re likely to use the integrated keyboard than getting an external. It’s not too bad, though it does sit further back than most, forcing you lay more wrist and forearm on the black rubberized surface. Thankfully it doesn’t smudge easily but it does trap dust a little better. While the keys themselves are comfortably spacious they are not mechanical, eking out just enough tactile feedback so as to not feel like mush.

And yes, the touchpad does light up, which probably accounts for why it takes a small 89mm by 56mm spot given how much space is available. On the bright side, it does feel good to operate and didn’t run into any skipping or accuracy issues. Nobody’s really going to use it for their gaming, of course, but it comes in handy when you remember that touchpad gestures exist.

Like other desktop replacement notebooks, the business-end of the AW17R4 can be found around the back. Here you’ll find a Killer Enabled e2400 ethernet port, a Mini DisplayPort 1.2, a Thunderbolt 3 port, HDMI 2.0 output, and a proprietary slot for the Alienware Graphics Amp to connect an external graphics card. On the right side there’s a single USB-C port, while the left has two USB 3.0 Type-As and ports for audio out and headphone. That’s plenty to get you connected, though I do wish there were more USB ports for additional peripherals – I had to keep a USB hub handy for microphones and controllers.

Alienware offers multiple display configurations for the AW17R4. Our unit had a standard 1920×1080 60Hz panel which held up reasonably well for both gaming and media; it’s sharp and can get good colors but does feel lackluster when you consider it’s a new notebook. Thankfully, there are options for a 2560×1440 120Hz TN panel with Nvidia G-Sync, or a 3840×2160 IPS depending on your priorities. Interestingly, these also come with Tobii Eye Tracking which have impressive game compatibility, supporting titles as recent as Assassin’s Creed Origins. This is great for players needing more accessibility, but if you can operate a mouse fine then this isn’t going to be your sci-fi replacement.

The GeForce GTX 1070 may not be the most powerful GPU but it won’t leave you running into roadblocks anytime soon either.  New and graphically demanding games such as Assassin’s Creed Origins and Star Wars Battlefront II can be played using a mixture of ultra and high settings for 60FPS, breaking the 100FPS mark should you tweak those settings down a little. Even at a combination of high and medium the games looked good, though bear in mind we played this at a 1080p resolution and without G-Sync. 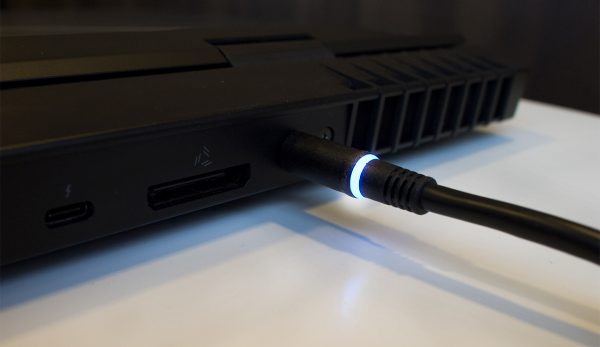 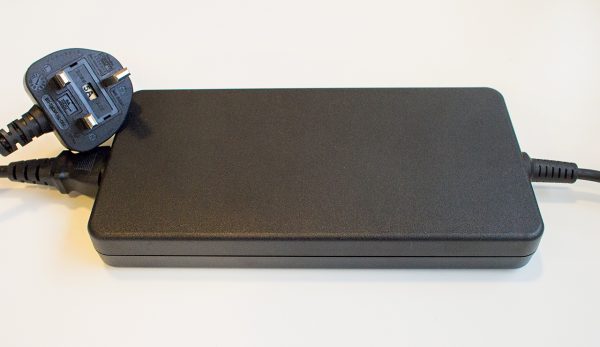 Instead, I was far more curious about the AW17R4’s virtual reality capabilities, a notion influenced by the HTC Vive bundled in the review kit. Let it be known that first-time set-up may prove frustrating, especially when it comes to angling the Vive Lighthouse sensors and calibrating the playable area. Thankfully there’s a good amount of troubleshooting content online, and a shareware tool called OpenVR Advanced Settings has proved invaluable. It’s best that you have a dedicated zone for this too since time and effort needed to the tear-down and set-up gets discouraging quickly.

Titles such as Eve: Valkyrie, Elite: Dangerous, and Super Hot VR ran without a hitch, which meant graphically simpler experiences such as Star Trek: Bridge Crew or Keep Talking and Nobody Explodes had no problems either. Yes, that includes the cult phenomenon that is VR Chat.

However, given the spiking framerate for those first two games, it seems that the GTX 1070 is going to be the minimum cost of entry if you’re planning to hit the 90FPS limit of the HTC Vive. Even then you’re going to have to lower or tweak some settings, especially supersampling, though the end-result is still highly immersive. With more than 200 VR-compatible titles on Steam as of writing, you won’t be running out of things to see or try anytime soon.

Heat and noise from the AW17R4 is going to be noticeable when running VR and demanding games. The former isn’t too much of a concern so long as you keep the area clear for the intake and exhaust vents, though the whirring fans will grow distracting. I highly recommend using earphones or closed-back headphones for gaming, leaving the speakers for system notifications or YouTube browsing. The included Alienware Sound Center can help to adjust the audio further.

The AW17R4 ticks all the boxes for a desktop replacement, especially if you’re looking to jump into the world of VR. The design may seem a little dated to some but it’s recognizably Alienware, with enough on-board customization to proudly declare its gaming heritage or to pass unnoticed in austere environments. Critically, it has the hardware and connectivity options needed to keep you going for the next couple of years, an offer tempered by just how loud this thing can become as well as its $3,499 (or higher) price tag.

Ade thinks there's nothing quite like a good game and a snug headcrab. He grew up with HIDEO KOJIMA's Metal Gear Solid, lives for RPGs, and is waiting for light guns to make their comeback.
Previous post Metal Gear Survive open beta now live for PS4 and Xbox One
Next post The Predator League 2018 is APAC’s biggest DOTA 2 tournament