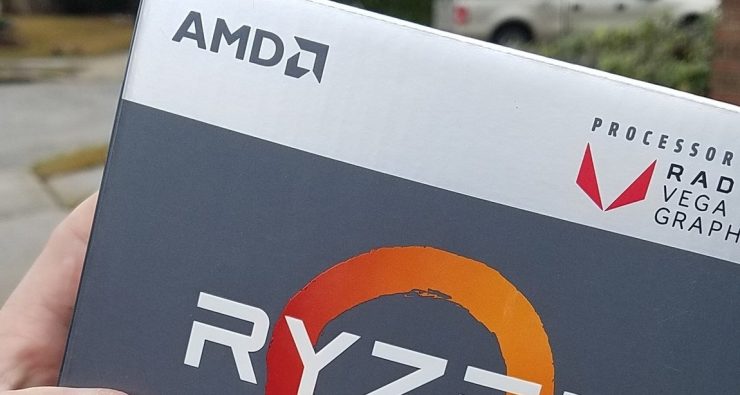 AMD’s new Raven Ridge APUs drop today, and they may be among the best value-for-money chips you can buy. These are the first desktop Ryzen processors to feature Radeon RX Vega graphics embedded on the same chip, so they’re an excellent choice for entry-level to mid-range systems.

Custom AMD APUs already drive the graphics in consoles like the Xbox One X and PlayStation 4 Pro, so the company clearly has the expertise it needs in this area. However, the consumer versions of AMD’s APUs still fell short of delivering a truly playable experience on PC, but that’s exactly what AMD is hoping to change with Raven Ridge.

The Zen core complex and Vega graphics are linked together via AMD’s Infinity Fabric, which in turn also services clients like the multimedia engines, display engine, DDR4 memory controllers, and the I/O and system hub.

Raven Ridge also adopts an even more power efficient 14nm+ FinFET process. This is a density-optimized version of GlobalFoundries’ 14nm+ FinFET process, and it allows for smaller dies and lower operating voltages across the entire power/performance curve.

But it’s the Vega graphics at the heart of this chip that I’m going to be focusing on today. It is based on the same geometry and pixel engines as the full-fledged Vega GPUs, in addition to next-generation compute units (NCU) with support for Rapid Packed Math.

At S$237 for the Ryzen 5 2400G and S$145 for the Ryzen 3 2200G, the new APUs represent very attractive options for gamers on a tight budget. Oh, and they come bundled with AMD’s Wraith Stealth cooler, so that’s another expense saved. Like all other Ryzen chips, they’ll also work on the AM4 platform, although most folks exploring this price bracket will probably opt for something like the B350 chipset.

That said, let’s dive into the performance results for the Ryzen 5 2400G on the next page.

Here’s a list of the benchmarks and games used for testing:

The Ryzen 5 2400G obviously isn’t intended for anything more demanding than a 1080p resolution, but I’ve run it through the full suite of 3DMark benchmarks anyway to illustrate the performance drop-offs.

Obviously, the on-chip Vega 11 graphics still doesn’t quite replace a discrete GPU, even an entry-level one like the Radeon RX 550GB. But what it does is give it a run for its money, especially when you consider the costs of both. The Radeon RX 550 was 22 per cent quicker in 3DMark Fire Strike, which doesn’t seem too big a lead considering that you’d have to shell out around S$169 for it (depending on the brand) compared to the Ryzen 5 2400G’s S$237.

What’s more, the latter offers the full package, with decent graphics performance right out of the box.

For some perspective on how much of an improvement Raven Ridge offers over AMD’s older APUs such as Godavari, consider that the A10-7870K scored a mere 6503 in Sky Diver and 1761 in Fire Strike. That amounts to a 63 per cent and 69 per cent increase respectively, which is nothing to turn your nose up at.

Furthermore, the Ryzen 5 2400G is clearly far ahead of the Intel UHD Graphics 630 on the Core i5-8400. It was a good 155 per cent faster in Fire Strike, completely outclassing Intel’s integrated graphics offering.

Ashes of the Singularity: Escalation

Granted, you’re probably going to need a far more powerful setup to run Escalation, but the numbers here are nevertheless illustrative of the performance differentials between the three different setups. That said, it’s worth noting that Escalation is a title limited more by the CPU than the GPU, which is partly why the performance gap between the Vega 11 graphics on the Ryzen 5 chip and the Radeon RX 550 was smaller than usual.

Mankind Divided is a rather demanding title, so it’s quite impressive that the Ryzen 5 2400G managed a sort of playable 25.8fps at Low settings. Yes, this isn’t going to be the smoothest experience, but I consider it quite a feat that the game didn’t devolve into a stuttering mess. On the other hand, the game was completely unplayable on the Core i5-8400.

The Radeon RX 550 was around 20 per cent faster, barely breaking the 30fps mark at Low settings.

The Ryzen 5 2400G did even better on Hitman, posting a relatively smooth 41.52fps on Low settings. Unfortunately, the Intel UHD Graphics 630 didn’t fare much better here, and it was 61 per cent slower than the Vega 11 graphics.

However, the Radeon RX 550 was approximately 24 per cent better than Vega 11, driving home the fact that the gap between an entry-level GPU and AMD’s integrated offering isn’t exactly insignificant.

AMD’s APU did quite well on Shadow of Mordor as well, a relatively old title considering that we’re already in 2018. It was 115 per cent quicker than its Intel counterpart, once again cementing AMD’s lead in integrated graphics among the current generation of CPUs. Still, the Radeon RX 550’s advantage leapt to 45 per cent here, it’s largest yet.

All things considered, I’m pretty encouraged by the graphics performance of the Ryzen 5 2400G. It’s nothing mind-blowing, but it is still miles ahead of anything Intel offers at this point, and compares favorably against a discrete GPU like the Radeon RX 550 2GB.

But even though it’s an entry-level card, the Radeon RX 550 2GB’s lead is not insignificant, so I can’t quite say that the Ryzen 5 2400G is a replacement for discrete graphics. Still, it comes close enough, and for someone on a really tight budget, AMD’s Ryzen 5 APU will do the job, at least until you can save up for a discrete card.

What’s more, the games I used to test the Ryzen 5 2400G are far more demanding than e-sports titles like Dota 2, Overwatch, and Counter-Strike: Global Offensive. If the 2400G can deliver a more or less playable experience on some of the tested games here, performance on these less demanding e-sports titles should be much better and good enough for casual players.

That in itself gives me reason to be excited for what future generations of similar CPUs will bring. The Ryzen 5 2400G is a shining example of what integrated graphics can do, and it can only get better from here on out. Hopefully, we’ll reach a point where some of the safety rails – 1080p and no eye candy in the settings – can be removed.

Squee delights in trash talking on Overwatch and sleeping till 5pm on weekends. Few other things matter, except perhaps the next episode of Game of Thrones.
Previous post Final Fantasy Royal Edition arrives on 6 March, comes with new dungeon and features
Next post Blizzard celebrates the Lunar New Year with special items and events across games