How Strife wants to change MOBAs 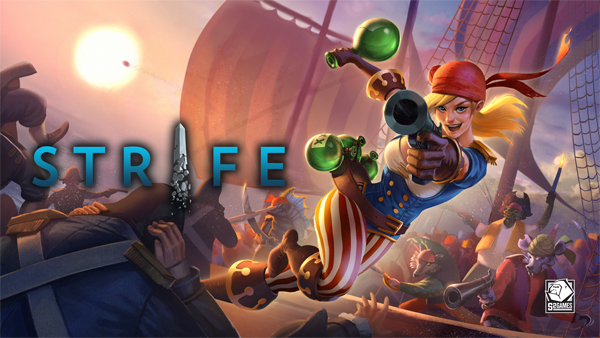 Tucked away inside ITE Ang Mo Kio was this year’s Campus Game Fest, where S2 Games was showing its first public demo of Strife outside North America. It’s easy to dismiss this as another MOBA but the developers have revised the age-old formula enough to call it “second generation”. Producer Tim Shannon, who has worked on many aspects of the game, tells us why.

“All the MOBAs out right now that are really successful were iterations on the theme of Dota 1,” says Shannon. He has a point – since the WarCraft III mod’s release in 2003 the gameplay hasn’t seen a huge change, with two of its developers eventually moving on to Riot Games and Valve respectively.  So how does Strife set itself apart?

Compete against the enemy team, not yours

One of the key changes boils down to affecting the community, which has been gaining an unsavoury reputation. “A lot of that [toxicity] comes from design elements,” he explains.

From choosing roles to gaining resources, MOBAs have you competing with teammates right from the start. Instead, Strife offers flexible hero characters and “a more equitable” gold sharing system. Rewards are evenly split between lane partners rather than favouring who got the last hit, with a portion divvied up among the rest of the team.

By fostering this cooperative spirit and implementing community karma and group systems, Strife will hopefully be more positive player environment. But these gameplay changes don’t end here; dropping hero roles means everyone gets to stay engaged, and a showpiece example of better player involvement has to be the removal of wards.

Usually relegated to what Shannon calls the “sacrificial support”, buying and planting wards (used for map visibility) is a dreary task that breaks pacing and usually ends up being forgotten. Thus the developers had no qualms replacing it with observation posts that activate when an ally is nearby.

With everyone now participating in equal measure, it’s time for efficiency. Items can be bought and queued anywhere on the map, delivered via personal courier with the hit of a key. Adding out-of-combat regeneration means you have even fewer reasons to head back to the fountain. Then there’s the matter of ability cool-downs, which are fairly shorter.

“We want you to cast your abilities a lot but we don’t want it to feel like [you] never have to make decisions on when to cast it. So we keep the mana pools limited but offer you opportunities to regen a lot of mana,” explains Shannon.

Noob team, go uninstall the game, et cetera. Just the usual round of comments hurled around in any online competitive match, but for a newcomer they can prove frustrating.

[quote]”We don’t have to remove complexity to make it more accessible.”[/quote]

In comes S2 Games once again. Littered across Strife is visual feedback such as a threat ring that fades in around enemy towers, or a charging bar that shows when regeneration kicks in. Even ranges for creep experience are shown, so that you don’t stray too far.

“When there’s information that you need to play the game, we show you that. And in that way we don’t have to dumb the game down to make people get into it. We don’t have to remove complexity to make it more accessible.”

The demo build had a mode called “Caprice’s Story” which served as both backstory and a tutorial. It’ll likely make its way into the final product, presumably with different versions to cover more story and other advanced features of the game.

Evolving pets and a crafty progression

The only progression in MOBAs is usually that of the player’s experience and performance itself, which can be a little hard to measure. Even statistics are subjective as we’ve all had those bad days – you know what I’m talking about. Strife offers two new features that should be interesting to the long-term player: pets and crafting.

“Pets are account-persistent companions that assist you in the game.” They each have their own speciality, offering an active ability, a triggered ability and a passive bonus, these pets level up over time too, evolving into stronger versions like Pokemon do.

Crafting isn’t an entirely new concept but in Strife, it falls into the realm of customisation. A player needing a defensive bonus rather than a damage boost can simply use a component of equal cost. The item’s base bonuses and cost remain the same for balancing.

Needless to say, it’s an exciting for possibility for build experimentation. Thinking of the huge potential divide in the player base, I naturally had to ask about matchmaking.

The matchmaker (supposedly) knows all

The answer is automated matchmaking, of course. Here, Shannon points out that they’ve also removed in-game lobbies since it only ended up being a medium for abuse.

Matchmaking begins by selecting a hero and then joining a queue. The game then takes a look at your rating as well as your history with that particular hero. Is it your first time using Caprice? Do you have a high win rate when using Bastion? After that the system will work out the best match given the current conditions.

Teams can also join a queue together, where the system will apply the same formula but with more player variables at play.

Casual counterpart to the competition

It’s far too early to tell how Strife will fare in an eSports capacity or whether it’ll even rock the boats of Dota 2 and League of Legends. The competition is already well established with huge communities and prize pools going around, so Strife has a lot to prove once it goes live in 2014.

Then again, the appeal to newer players may prove to be its biggest selling point. The people who actually tried the demo – some of whom were completely new to the genre – left with good impressions. Even those simply spectating seemed fascinated with the snippets they saw (like regenerating health), although I did overhear one group making wrong assumptions before moving on.

From a casual perspective Strife looks like a fun MOBA romp with friends, not a pressure cooker with overwhelming expectations placed upon you. Not all games have to be a cut-throat competition, and this looks like a strong alternative.

For those already neck-deep in the genre, I only have this to say: the mini-boss in Strife, its “Roshan” if you will, is a guardian that has a huge ape-like creature named Krytos locked up. Defeat the guardian and Krytos will serve at your side, spawning in a lane of your choice and quite literally wrecking things for the enemy. Any other judgements have to wait until release.

Strife will be available on PC, Mac and Linux, with a beta tentatively beginning next month. We’ve got some codes to give away so keep an eye out for that!

Ade thinks there's nothing quite like a good game and a snug headcrab. He grew up with HIDEO KOJIMA's Metal Gear Solid, lives for RPGs, and is waiting for light guns to make their comeback.
Previous post Review: Beyond: Two Souls (PS3)
Next post "The Simpsons: Tapped Out" Gets THoH Update To Ready You For Halloween