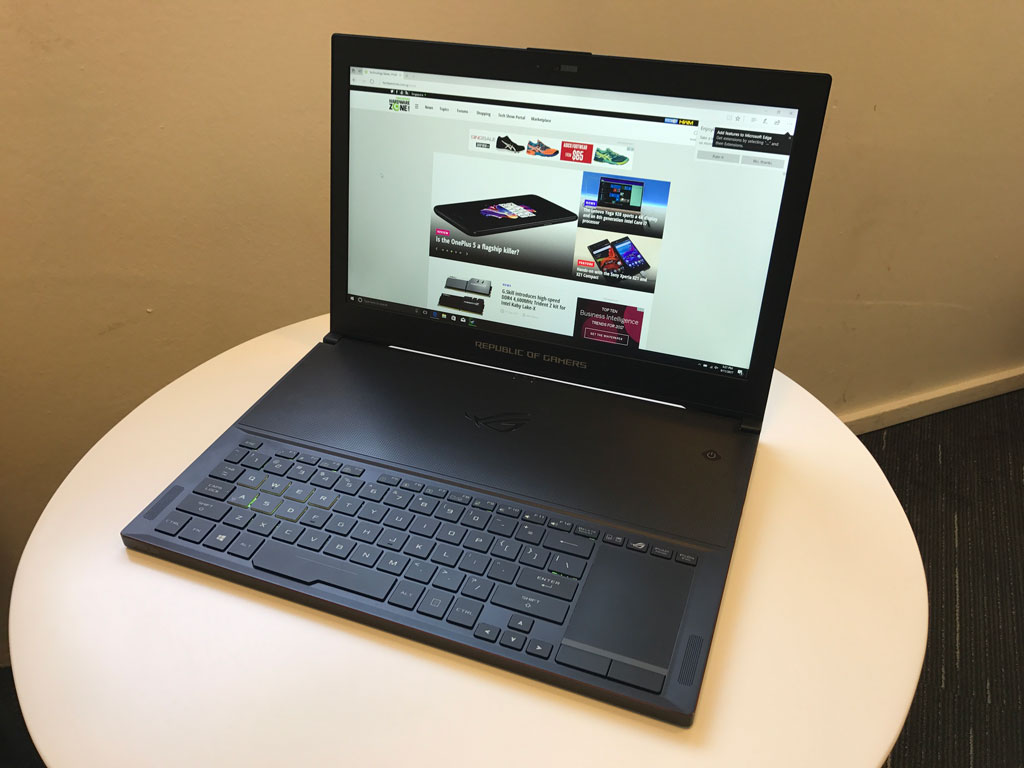 What does it take to build a gaming laptop that isn’t built with the thickness of a Subway sandwich and quiet enough to run Overwatch next to a sleeping baby? Apparently, just NVIDIA’s Max-Q technology – the tech company’s unique design approach that enables hardware makers such as ASUS to create skinny notebooks equipped with GeForce GTX 1080, 1070 or 1060 GPUs.

The ASUS ROG GX501 Zephyrus is one example, and was also the first Max-Q designed gaming notebook to come. But how does it measure up? That depends how much of non-gaming related things you will use the laptop with.

Redefining what a gaming laptop is 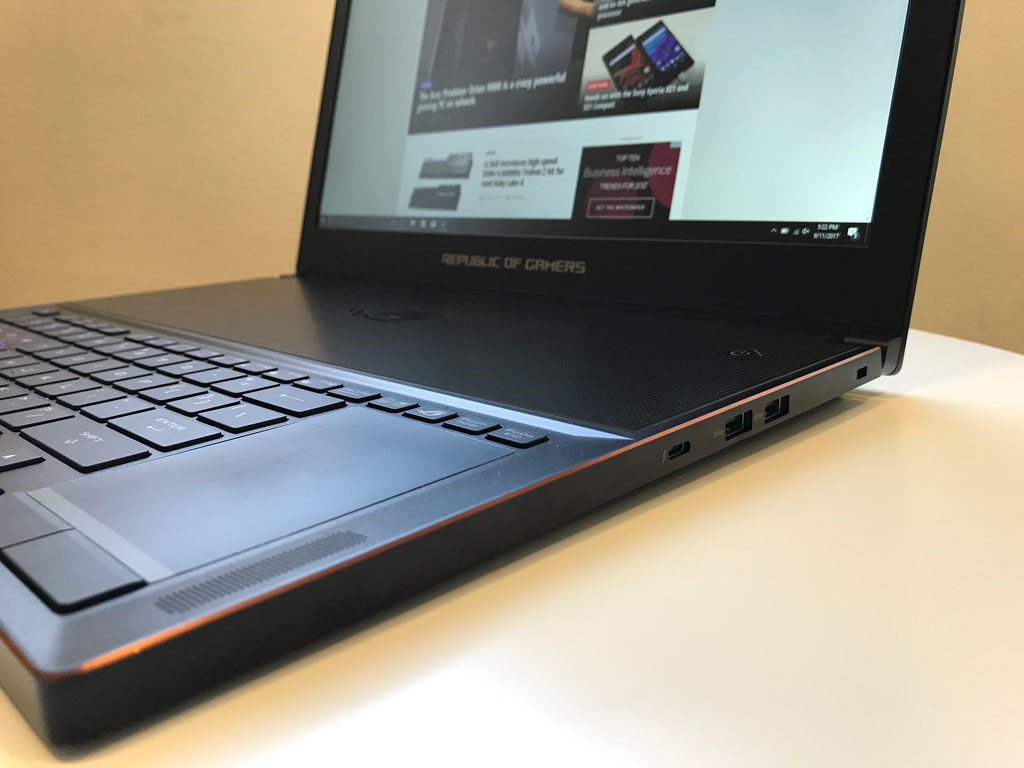 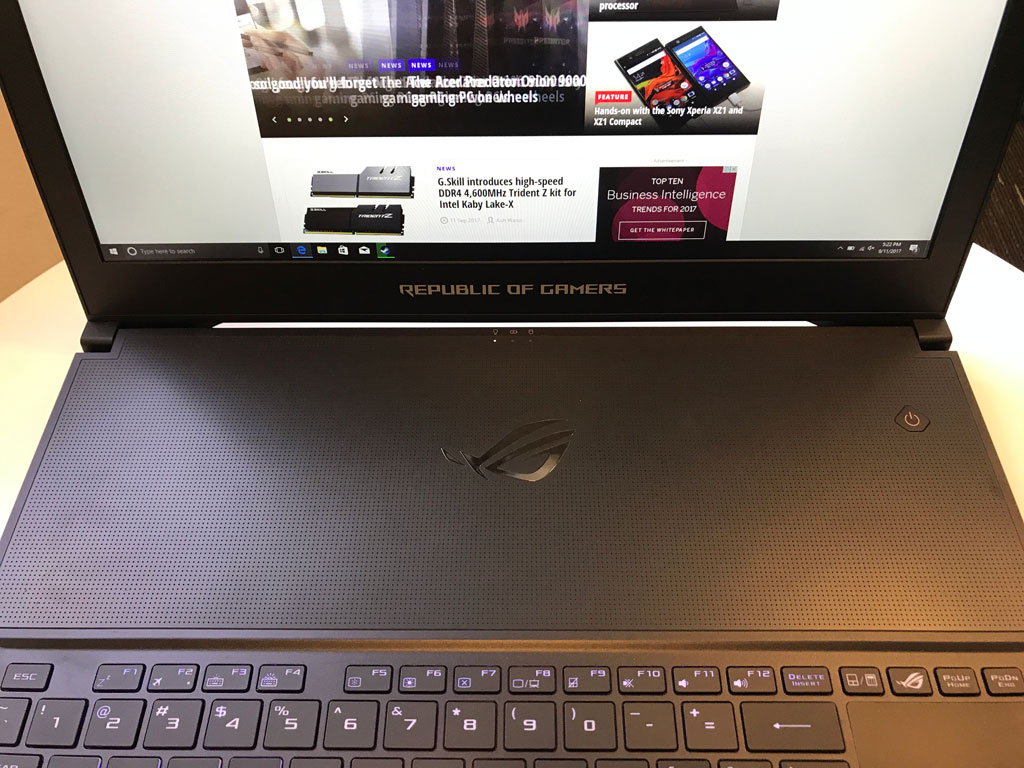 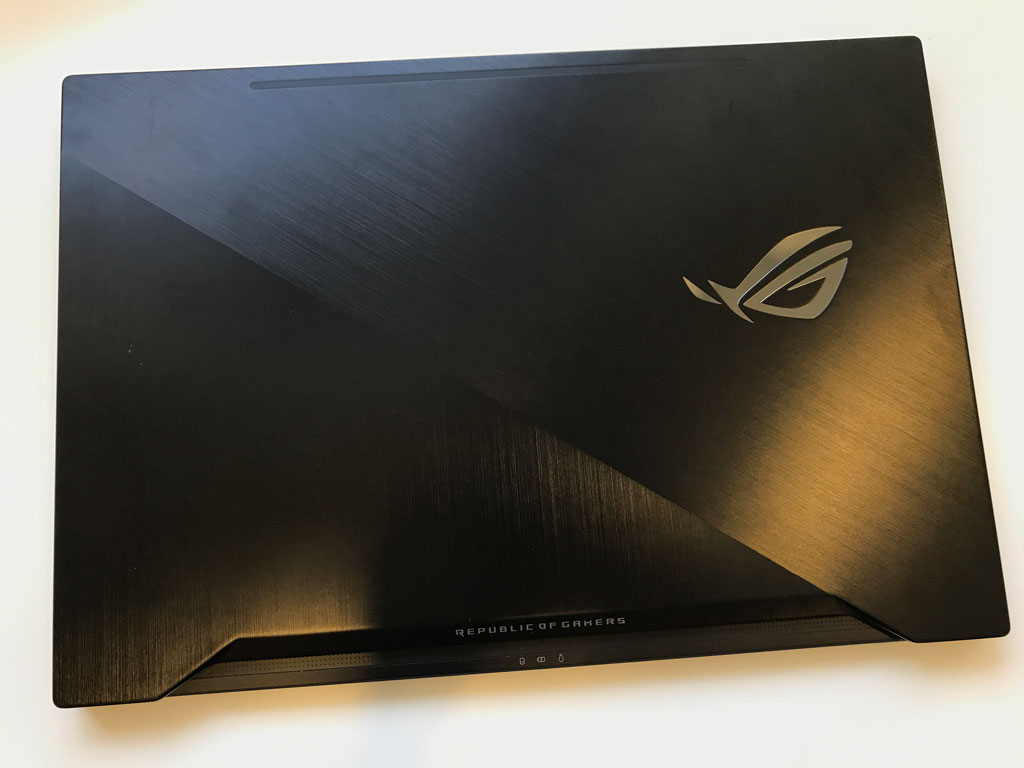 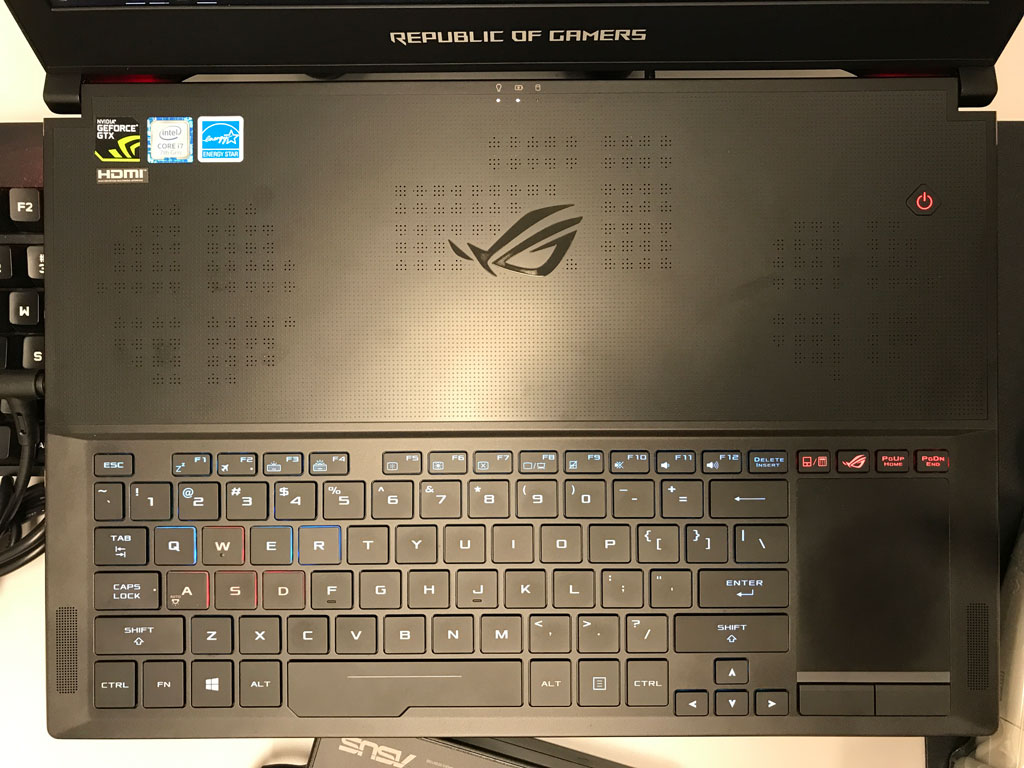 Taken as a gaming laptop, the GX501 Zephyrus is a high-tech wonder – it is one of the thinnest and most powerful mobile gaming machine around, and redefines (in our opinion, at least) the style of a gaming laptop. Made from a combination of aluminum and plastic, the Zephyrus’s frame and design also marks a departure from ROG’s traditional ‘Mayan-inspired’ designed patterns. For instance, the lid of the laptop uses a subtler brushed metal design, which is really nice, and would not look out of place in a business meeting.

But it’s still an ROG gaming laptop after all, and ASUS just could not resist slapping a large logo on the lid that also lights up in red LED when it’s powered on.

I mentioned earlier that the Zephyrus is pretty slim. At 16.9mm thick and 2.2kg, the ASUS laptop looks anorexic compared to its other ‘phat’ ROG siblings. But don’t be fooled by its size. My test model comes with a 7th-gen Intel Core i7-7700HQ CPU (clocked at 2.8GHz), 24GB of memory, 512GB SSD and crucially, NVIDIA’s Max-Q designed GeForce GTX 1080 8GB GPU. That’s some serious firepower, and I struggle to come up with anything more you’d want from a gaming notebook from a performance standpoint.

One of the unique design about the Zephyrus, and indeed, of any gaming notebooks I’ve seen, is its “Active Aerodynamic System”. It’s a very fanciful name by ASUS and is basically a mechanical active ventilation system, where a section of the bottom of the notebook opens when you open the lid. ASUS claims this design allows for a 32 percent increase in cooling performance. It’s difficult to quantify this ‘percent’, but what I can say is this; the Zephyrus is as cool as it is quiet as I had expected it to be. The laptop measured just 10.6dBA on my sound level meter at maximum load. To put that into context, that’s akin to the sound of a pin dropping (http://www.noisehelp.com/noise-level-chart.html). 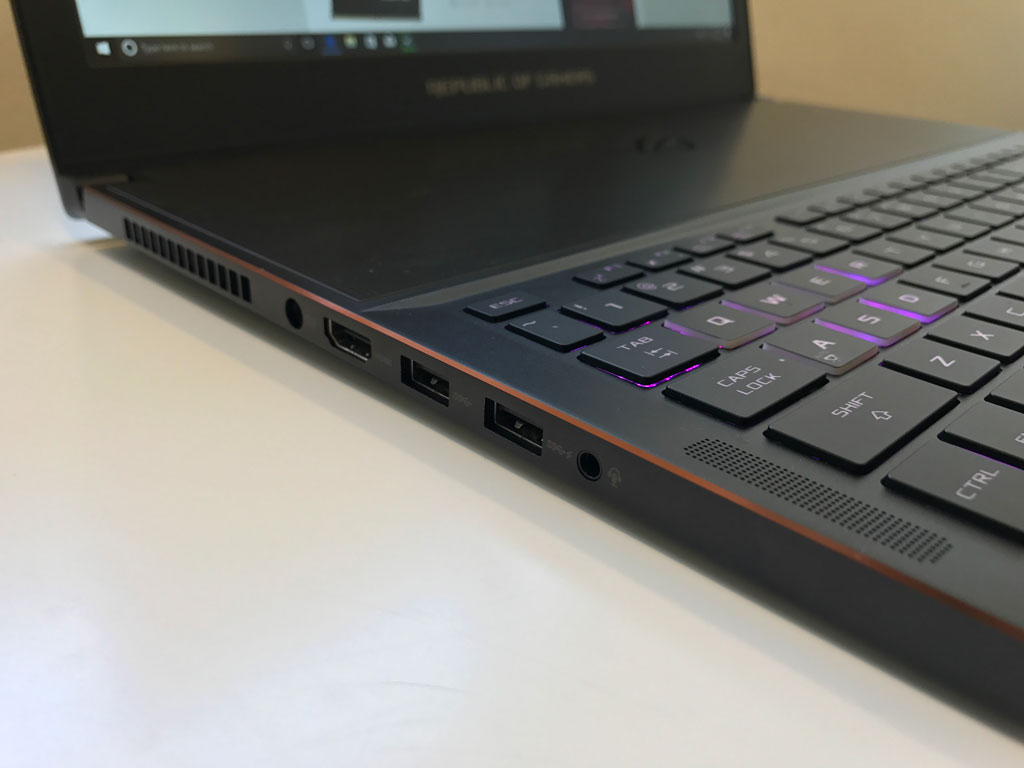 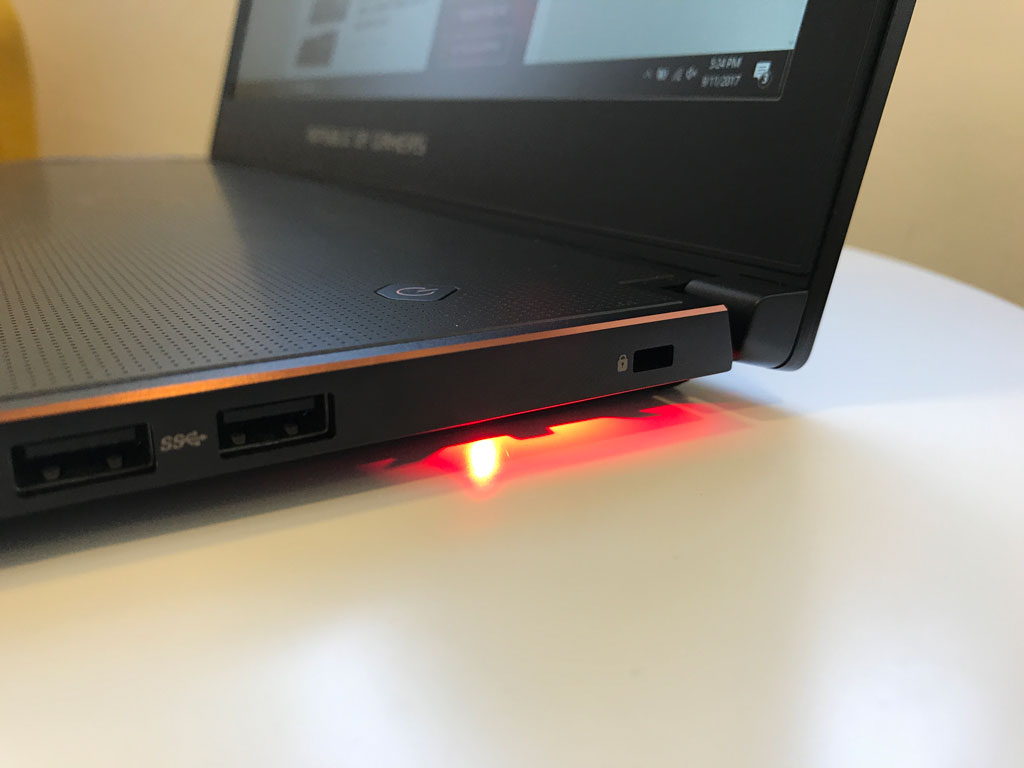 For connectivity and inputs, the Zephyrus has four traditional USB 3.0 ports, a Thunderbolt 3 USB Type-C port, HDMI, and a headphone jack. That’s enough to get your gaming peripherals going, such as a gaming mouse and headset. And because the notebook is too slim for an Ethernet port, a USB-to-Ethernet dongle is included in the box. An SD/MMC slot is conspicuously missing though, though I’d doubt it to be a deal breaker for gamers. The Zephyrus can also stream console games from the Xbox One, and it even includes a dongle that lets you connect wireless Xbox controllers to complete the experience.

Great for gaming but…

Opening up the screen, I found the display itself to be fine – viewing angles are good and colours are bright and vibrant. The screen also has a matte coating, which meant you don’t get distracting reflections when you game or watch Netflix on it. The 15.6-inch display also supports NVIDIA’s G-Sync and its 120Hz refresh rate ensures that you’ll enjoy a buttery smooth gaming experience at up to 120 frames per second. Unfortunately, the Zephyrus’ maximum native resolution is pegged to 1920 x 1080. I get that ASUS probably wanted to sacrifice resolution for better performance. But you’d think that with such power inside the Zephyrus, the least ASUS could have done was to push up the maximum resolution to a more respectable 2560 x 1440 – and giving gamers the choice to go down to Full HD should they choose to.

The outcome to this resolution cap is that the Zephyrus performed fantastically well at whatever games I threw at it. I have played Overwatch, Call of Duty: WWII and even Ghost Recon: Wildlands on it and the laptop easily cleared them all, averaging between 90 to 100fps and above for these games at 1080p. It’s easily some of the best performance I’ve seen from a gaming laptop.

Performance wise, the Zephyrus is a perfectly capable computer for pretty much any work you throw at it. But unfortunately, many of the gaming focused design decisions mentioned above on the Zephyrus come back to haunt it if you’re using it for literally anything other than gaming. 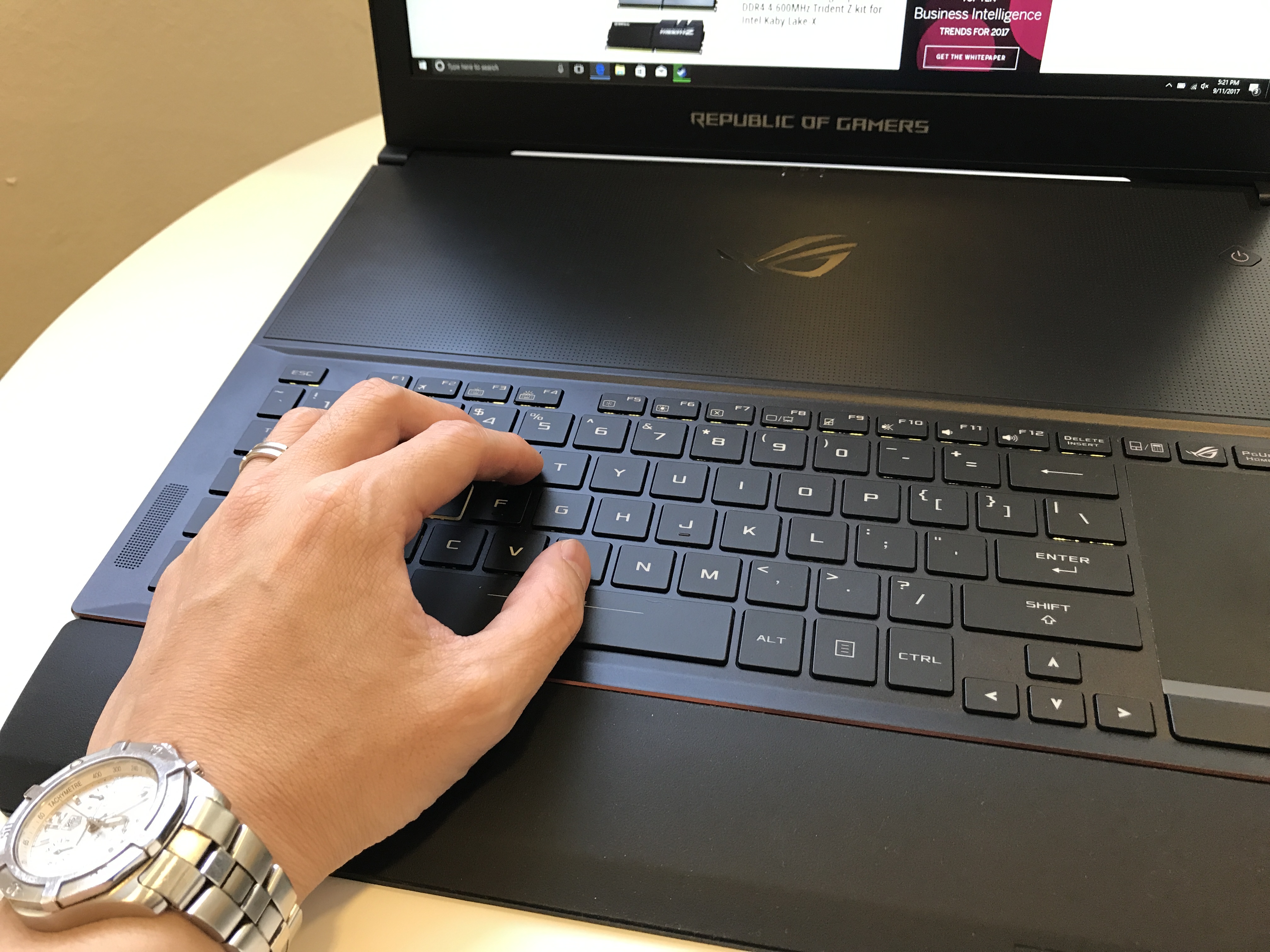 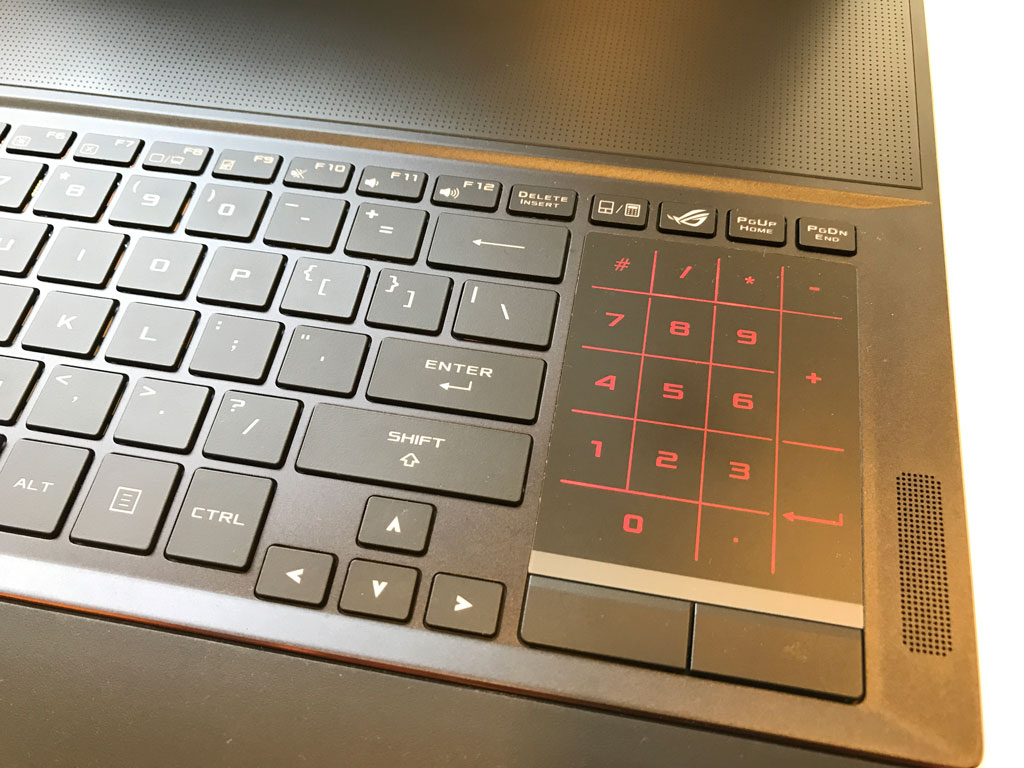 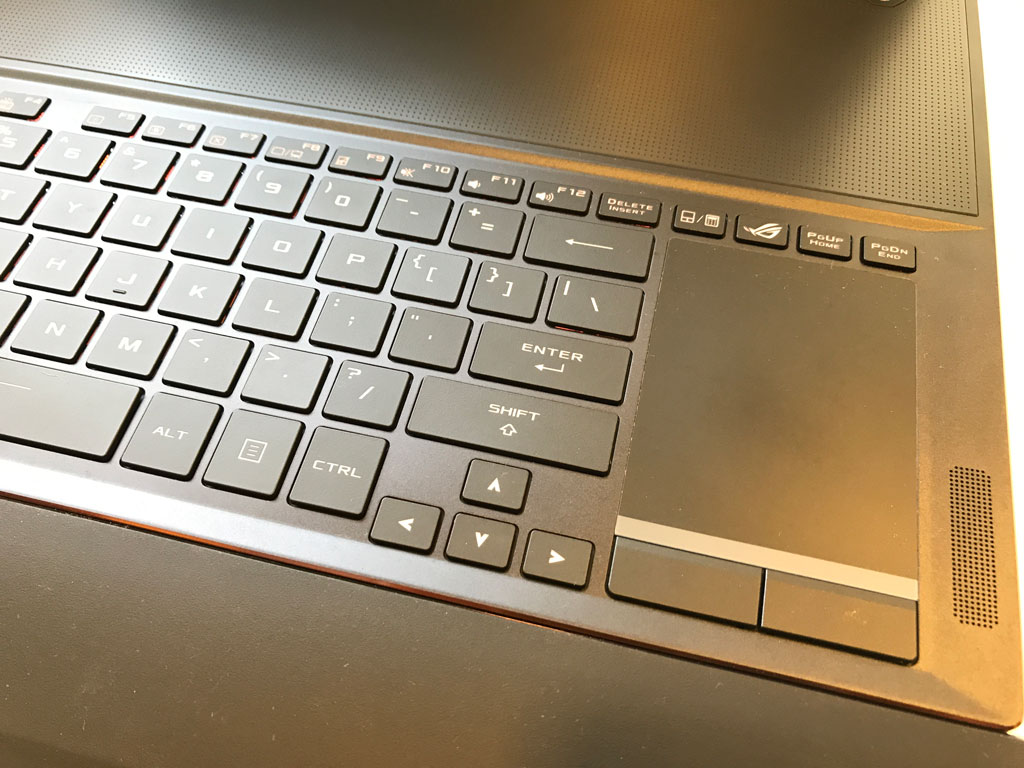 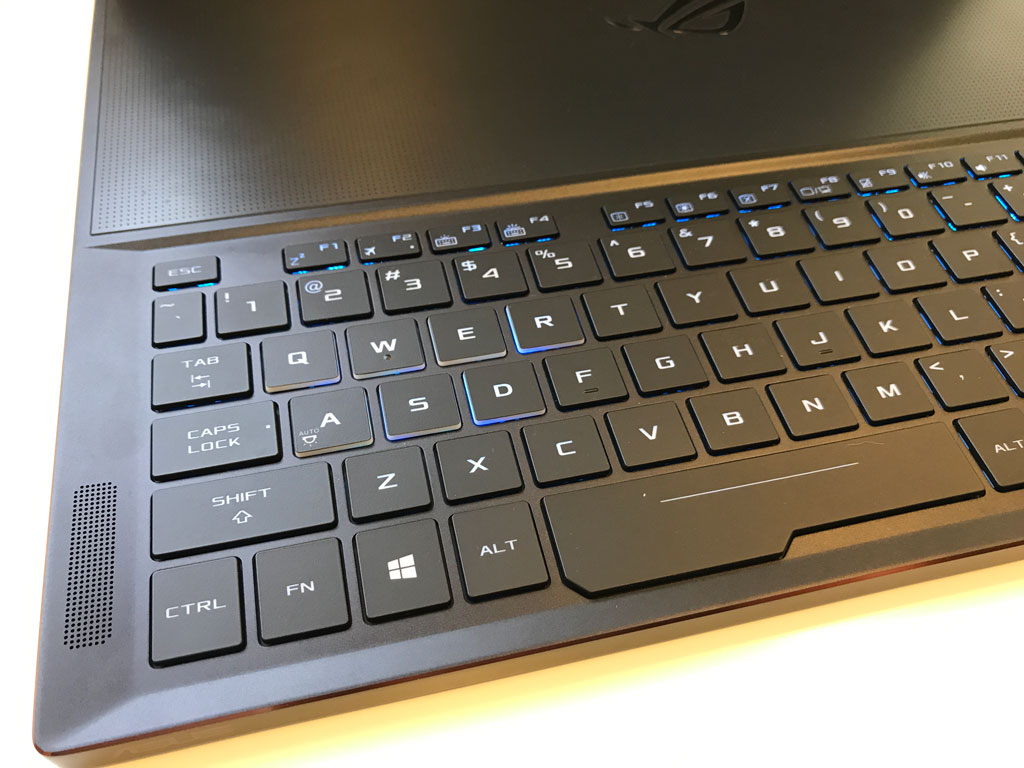 You see, the Zephyrus’s unique internal cooling design meant that the hottest components, the CPU and GPU, are loaded right at the back of the laptop by the raised-up cooling area. This meant that the keyboard and trackpad have to be move furthered up front of the laptop – right at the bottom edge, in fact. This makes typing on the Zephyrus simply uncomfortable, even with the supplied wrist rest that ASUS provided (evidently, the company recognized the issue here). The trackpad is also positioned to the right side of the keyboard, rather than below it – which is also unusual for a 15-inch laptop. This is a bummer if you are left-handed, and have no access to an external mouse.

The Zephyrus’ battery life was also a disappointment, which scored just 98 minutes in PCMark 8’s battery life benchmark. The benchmark stimulates a standard productivity usage, such as web surfing, word editing and photo editing. I had expected more from a Max-Q designed laptop, which NVIDIA touts enhanced battery life as a key feature of the technology. I can understand that most gamers will plug the Zephyrus to a power outlet for their DOTA 2 or Counter-Strike: Global Offensive fix, but to have a laptop that lasts for less than 2 hours while checking emails, surfing the webs and writing reports is almost flat out terrible for a notebook of the Zephyrus’ class

But some will consider these complaints as pretty much moot when it comes to gaming laptops. For one, unlike standard non-gaming laptops such as a Dell XPS 13 or MacBook Pro, battery life isn’t a traditional consideration. Gamers preferring to play on higher-resolutions can always hook up the Zephyrus to an external 27-inch monitor via its USB-C port anyway. But I digress because if the GX501 Zephyrus, as one of the first Max-Q designed laptop, is to showcase how gaming laptops can also be functional in the vein of a traditional notebook, then it didn’t quite hit the mark.

At the end of it all, there’s no doubt that the GX501 Zephyrus is an ROG masterpiece. And for an ROG high performance gaming computer, the Zephyrus performs admirably as a gaming laptop. It’s just that I was hoping for it to be more than just a gaming laptop, considering how the Max-Q technology can potentially change our stereotype gaming laptops. The Zephyrus only partially succeeds in this case.

Perhaps unfairly so, as one of the first NVIDIA’s 1st-gen of Max-Q based gaming laptop, the Zephyrus must bear more scrutiny than it deserved. I really do like the Zephyrus as a gaming laptop, but no matter which way you glance, there’s no hiding from the fact that the S$4,898 machine suffered from a poor keyboard and trackpad layout (even if not by choice) and battery life, and that to me, makes the laptop not quite good enough to function for most things that aren’t gaming.

Aaron Yip is an industry veteran with more than 15 years of experience. When not spending time on his gaming PC and consoles, he can be found in Hyrule solving ungodly puzzles and collecting gems.
Previous post Gravity Rush 2 services extended to 19 July
Next post The Dissidia Final Fantasy NT Ultimate Box will burn S$319 out of your pocket